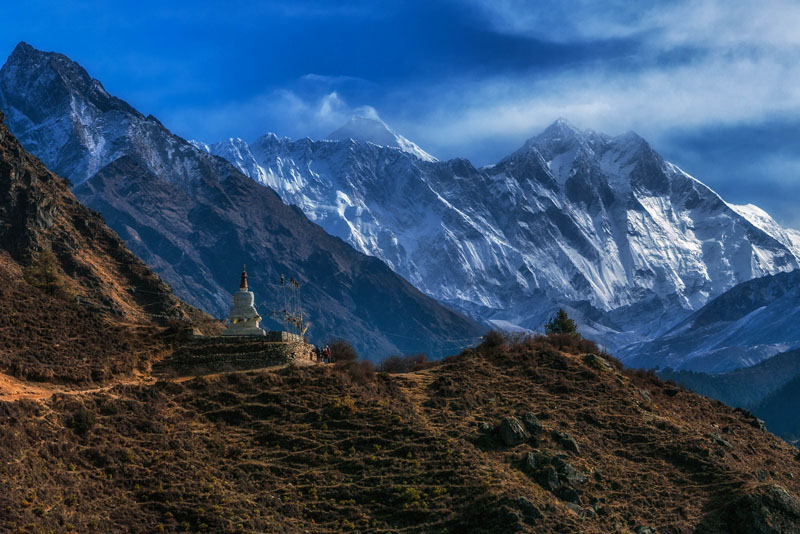 Throughout our many adventures around the globe, we have had the privilege of participating in some of the best treks in the world.

We've been lucky to have hiked, trekked and visited 110 countries on all seven continents. While we don't include Antarctica on this list of treks, we did do quite a few great hikes on the continent and think it is probably one of the final frontiers for great treks on earth.

But we have rounded up the greatest treks, we've done on six continents.

Great Treks of the World

The way we chose this list if we've done it. We decided to choose our list this way so that you can click through to find more information on our travel blog so that you can do it yourself!

We've also had guest contributors inspire us to expand our list to more great destinations. If someone has written about it in depth on The Planet D it's on it.

These are some of our favorite treks on earth!

Nothing has ever compared to trekking to the base camp of the highest mountain in the world. In our opinion, it is the best trek in the world.

The trek to base camp takes 12 days round trip through the Himalayan mountain range.

What makes this trek difficult is the number of days spent at a sustained high altitude. Once you land in Lukla and climb for a day, the rest of the trip is over 4000 meters.

But it if you take it slow and steady, this is a trip that is worth every heaving breath. The trek is awe-inspiring as you walk through high passes, surrounded by the highest peaks on earth.

Read our complete guide to Everest Base Camp

Reaching the summit of Mount Kilimanjaro was one of the greatest achievements we've ever accomplished.

We took the Machame Route aka the Whiskey Route to Uhuru Peak in Tanzania.

What makes this trek so unique is how many ecosystems the trail passes through.

It begins in a tropical rainforest and then moves through farmland, forests, moorlands, a mountain desert, and a freezing summit climbing zone.

Seeing massive cacti line the route made for spectacular scenery.

Trekking in Bhutan was a dream come true.

Surrounded by the Himalayas in a country that few people travel to was one of the most memorable experiences we've ever had.

The Trek to Laya is one of the more popular routes in Bhutan, but that doesn't mean it is busy. There is a $250 daily tourism fee to enter the country, keeping crowds to a minimum.

The trek runs along the Tibetan border crossing rivers, high passes and through villages.

It ends at the village of Laya.

Read More About our Trek to Laya here

It was during our Laya trek, that we passed the entrance to the Snowman Trek in Bhutan.

The Snowman trek is considered the hardest trek in the world as it spends 25 days at sustained high altitudes.

We didn't have the time, nor the money to take part in a 25-day trek in Bhutan, but it is on many people's bucket lists.

While the Inca Trail is so overly popular it turns people off, it would be criminal not to include it. Many people say it is the best trek in the world!

This trek follows the ancient trade routes of the Incas from Cusco to the lost city of Machu Picchu.

What more could you ask for in an adventure? There are several other treks around the Sacred Valley, so if you can't book a slot on this heavily backlogged trail, check out some other hikes as well.

Read: All You Need to Know to Be Prepared for a Machu Picchu Hike.

Patagonia in South America is one of the premiere destinations on earth for avid trekkers.

And Torres del Pain is one of the top hiking routes in the area. This multiday hike requires trekkers to carry tents, food and camping equipment.

Read about the entire experience here.

This hike to the Boz Uchuch Lakes in Kyrgzgkstan's Jyrgalan Valley region is one of the premier treks in the country.

It takes trekkers over to Boz Uchuk Pass to the Glacier lakes. We did this trek on horseback, but it is also very popular for hikers.

For extreme trekkers, I would say this winter trek is one of the toughest you'll ever do.

There are no Sherpas or porters to carry your bags, it's all snowshoeing through rugged terrain while pulling sleds over frozen lakes and rivers packed with enough gear to last 12 days in sub-zero conditions.

I'm talking about carrying ice picks to chip through meter thick ice for water, axes for cutting down trees for firewood and a woodstove to keep the massive prospector's tent from freezing.

If you want to show up anyone at the holiday party with your bragging rights, this is the trek for you!

Most people have heard of the Great Ocean Road in Victoria Australia. It is a beautiful drive that ends at the picturesque Twelve Apostles.

But if you really want to see the extraordinary coast, the Great Ocean Walk the things to do.

This multi day trek takes hikers along on a 56 km trek on the rugged Victoria coast.

After each day of hiking along beaches, through forests and wooden walkways, we were picked up and taken back to our luxury lodge where we were fed gourmet meals and soaked our feet in hot soapy baths.

The next morning we were dropped off at the point where we ended the day before to continue our walk to the twelve apostles.

The Route of Saint James also known as the el Camino de Santiago is a rite of passage for serious trekkers and has been a Pilgrimage since the 9th century.

There are eight different starting points that can take you from France, Spain or Portugal to Santiago de Compostela where the trek ends.

We've done many hikes throughout the Pyrenees, but we have yet to put them together to trek the Camino de Santiago. But it is high on our list! Soon, very soon, now that Dave can walk again without pain.

Sarah Point where you can take a water taxi with the great people of Terracentric Adventures in Lund.

Located at the northern tip of Desolation Sound and continues to Salterly Bay.

It's one of the premiere climbs in South East Asia and Mount Kinabalu is a great introduction to trekking.

We have it on our greatest treks on earth list because it was the very first trek we ever did in 2003!

Just visiting Borneo is an adventure to itself let along climbing Malaysia's highest peak.

The John Muir Trail is one of the most popular hikes in America. It runs 221-miles through California’s Sierra Nevada.

The trail takes you through lush valleys, creaks, and alpine vistas. There are six mountain passes with one reaching 14,000 feet.

Most of the trail is steadily over 10,000 feet making it quite the accomplishment.

For full details read: How to Hike the John Muir Trail

The hardest part of the Routeburn is getting a slot on the trail. It's a popular trek.

Lucky we were traveling with the Flying Kiwi and everyone that wanted to do the Routeburn had it set up in advance.

Another great day trek in New Zealand is the Tongariro Crossing. It is beautiful.

Adam's Peak is a spiritual pilgrimage in Sri Lanka that lasts a mere 24 hours. It is believed that Adam first stepped foot on earth here when he was cast down from heaven.

Sri Lanka's holiest place attracts pilgrims each year to climb its 5200 steps. Starting in the middle of the night, it is the perfect time to make it to the top for sunrise.

Read about our on Adam's Peak here

Hiking along the headhunter's trail of Borneo is like something out of a movie.

We had to take a small twin-engine airplane to Gunung Mulu National Park. We then secured our hiking permits to the Pinnacles where to set off by boat, and river crossings before reaching base camp.

The next day it was a rugged steep climb up to the most interesting view we have ever seen in our lives.

Pinnacles, a stone forest jutting 45 metres out of the earth, in razor-sharp

Getting off the beaten path of Sapa feels like you are walking through a National Geographic spread. Rice terraces filled with water drop down steep mountains.

Choose a tourist company that will take you deep into the mountains along the Chinese border that books a homestay with families living in the mountains of Sapa.

Not many people have heard of the Pukaskwa Coastal Trail in Ontario, Canada. It is often overshadowed by the West Coast Trail or The East Coast Trail, but this trail along Lake Superior is a tough one.

The trip can be an out and back, or you can take a boat out to North Swallow to 60 km up the trail. The trek back along the rolling coast.

You must carry all food and drink in and out with you so if you don't have experience, be sure to hire a guide.

Read more about our Pukaskwa Hike

Japan's highest mountain is an exciting trek. Otherwise known as Fuji-san, it is an active volcano that is regarded as one of Japan's three sacred peaks and iconic sites.

300,000 people (including some inexperienced hikers I know) climb Mount Fuji every year, so don’t worry if you’re not a frequent hiker.

Another great day hike is up the active volcano on the paradise island of Bali.

This trek was our very first volcano hike and it was spectacular. Trekking around a crater's edge is the adventure of a lifetime and seeing steam spew from an active volcano gives a rush like you've never experienced.

Be sure to stay on top of warnings and hire a reputable tour company, after what happened in New Zealand, we don't recommend hiking active volcanoes.

The five villages hike (Cinque Terre) on the coast of Italy is a beautiful trek along the Italian Riviera.

If you've never trekked before and are looking to get your feet wet, this is a short 1 day hike taking you through beautiful scenery. You can even indulge in delicious food and wine along the way.

The Pinnacles of Borneo, an Adventure in Sarawak 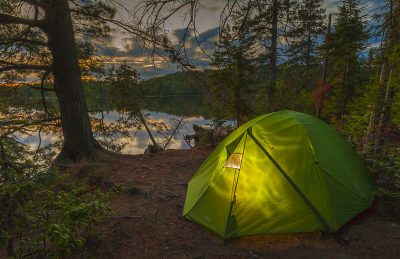 10 Things To Expect when Hiking Rainbow Mountain in Peru 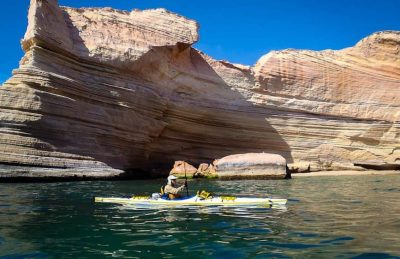 Top Things to do in La Paz, Mexico 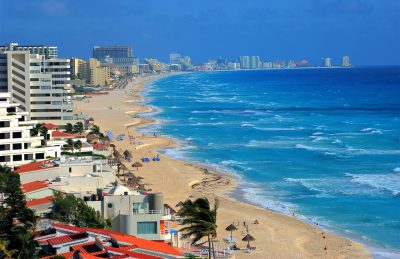 25 Awesome Things to do in Cancun – Plus Day Trips