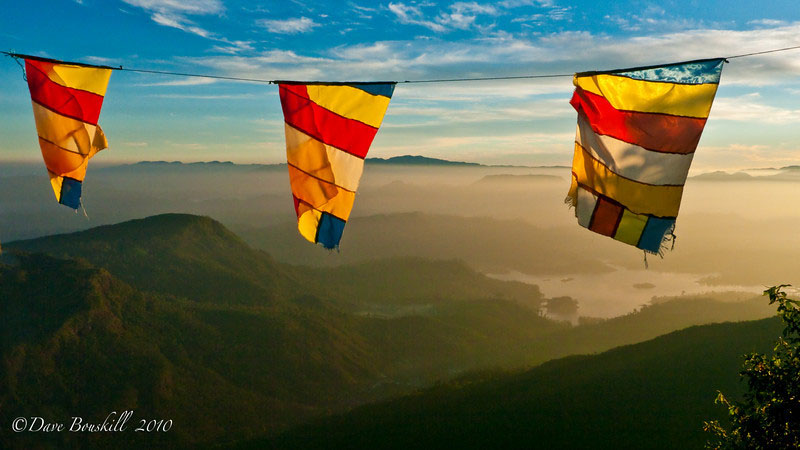 If there was one thing that we wanted to do when we visited Sri Lanka it was to climb Adam’s Peak and join pilgrims on this sacred walk.

Believed to be the place where Adam first stepped foot on earth when he was cast down from heaven.

Dave and I love to trekking and to be able to climb the mountain that is revered by so many religions is a unique experience.

Located in the central highlands of Sri Lanka near the village of Dalhousie, Adams Peak is Sri Lanka’s Holiest mountain. Each year pilgrims flock to climb its 5200 steps to the top at 2243 meters hight. .

What makes Adam’s Peak so unique is that it is believed to be sacred by many religions.

Why is Adam’s Peak such a popular pilgrimage in Sri Lanka?

Not only is it believed that Adam’s Peak was where Adam was exiled to the Garden of Eden but it is also believed that it is the place where Buddha last stepped from the earth before reaching Nirvana.

Adams Peak is that it is a pilgrimage for every religion.

We climbed Adam’s Peak along with Muslims and Buddhists, Christians and Hindus.

Maybe it is true.  Maybe this is a holy place. Where else on earth do so many religions join together as one for a festive and spiritual journey?

Each religion believes it to be the footprint of their different deities and we feel it is wonderful that all religions can come together harmoniously during the pilgrimage season of December to May.

Sri Lanka – The Garden of Eden

Legend has it that Sri Lanka was the original garden of Eden.

I can believe it, we enjoyed our time in the country more than anywhere we have been on earth.

If I were to be a believer, I could believe in this. It felt like a little slice of heaven.

The pilgrimage is a festive and lighthearted time, but believe me, the climb is difficult.

With 5200 steps reaching 2243 meters into the sky, Adam’s Peak will make your heart pump and your body sweat.

Pack warm clothes in your day pack. Even though Sri Lanka is a tropical climate, it is cold at the top.

We had to wait for an hour for sunrise and felt a strong chill. It is quite cold and crowded at the stupa at the top of the mountain.

Why do we always have to climb in the middle of the night? Oh, I know, it’s because we want to arrive for sunrise. It really does offer the most beautiful views to arrive at the peak for sunrise.

We awoke feeling refreshed and ready to go before snapping a quick shot of the mountain lit up with pilgrims already climbing.

This pilgrimage lasts for months and people climb 24 hours a day.

This trek is like nothing we have ever climbed before.

The Path Up Adams Peak

The path is lined with food stands and tea stalls selling everything from nuts and cakes to plastic dolls and elephant statues.

It is well marked and maintained.

Concrete steps lead all the way up to the peak at 2500 meters. While it is not the highest of climbs, it is still quite a challenge.

The steps make your legs burn as it is steep and steady.

Dave and I set a fast pace thinking we left too late and might miss sunrise. We ended up stopping often to take video and photos so when we did walk, we marched.

We were more than a little worried that we may not make it for sunrise.

Slow Going to the Summit

As we approached the summit, we actually ended up in a queue of people.

The path narrowed and a bar was put down the centre of the steps. People were stopped to catch their breath and there was no way around them.

We had come to gridlock in the middle of the jungle of Sri Lanka.

We hopped over the pole making our way up through the people already coming down. We were like a couple of fish swimming upstream, but we really wanted to make it to the summit and the sun was about to rise!

This pilgrimage lasts for 2 months and it is not a priority for the Sinhalese to be up there for sunrise. But it definitely was for us.

Some people start their climb at 9:00 pm while others do it in the middle of the day. As we said above, the climb continues 24 hours a day seven days a week during the seaon.

It is a steady and constant stream. We pushed on as our sweat steadily started to cool down. We were prepared for this.

We refused to put on warmer clothes until we reached the summit because they would just become drenched with sweat, but we did bring and an arsenal of warm clothing.

We have learned the hard way to bring a change of clothes up to the summit with us.

Wearing wet clothes in cold temperatures is not fun. In the past, I have sat for hours shivering in my wet clothing and I wasn’t about to do that again.

When we arrived at the top, the temple was packed with people and it was freezing cold.

We weren’t able to change quickly because the security guards were on us to get our boots off as quickly as possible.

Like many religious sites, It is a temple where shoes are not allowed

It wasn’t long until I was shivering.  I pulled out my sweater and stripped off my shirt underneath. I put on layer after layer as people looked on at this crazy tourist.

They were dressed in little more than a sarong and sandals and here I was shivering with a blanket and jacket.

What kind of Canadian am  I? I looked ridiculous.

The wait was long and crowded in the wind and cold.

People huddled together to catch a glimpse of the light rising over the mountains. It almost felt like God was about to say hello.

After the sun came up, It ended as quickly as it began.

We joined the mad dash of people making their way back to the warmth of the Sri Lankan highlands below.

Stalls and Toilets at the Peak

Before leaving, we encountered something different than we have on other treks. There were public washrooms up here. They had attendants and they are very clean!

We paid his 10 Rs and had a much more comfortable climb down than we expected.

Within 10 minutes flat I was hot and sweaty and quickly peeled off my layers.

We were prepared for a tough descent.  Going down is normally the hardest part and steps can be brutal.

But it wasn’t so bad on Adam’s Peak. Before we knew it, we were at the bottom.

We chatted with some Pilgrims, took some photos, stopped for a snack and were back at our guest house showered and packed in no time.

We were on a Tuk Tuk by 10 am to take us to the train station to Kandy and it is as if Adams Peak never happened. That is until we woke up the next day and felt the shot of pain through our calf muscles. Ouch, maybe it was harder than we thought.

What to worshippers Think of Adams Peak

How to Get to Adam’s Peak

The best way to get to Adam’s Peak is to take the train to Hatton from Colombo, Kandy or Ella. We took the train from Ella and it was a beautiful trip.

When you arrive at the station you can then hire a tuk tuk to take you to Dalhousie. There is also a local bus.