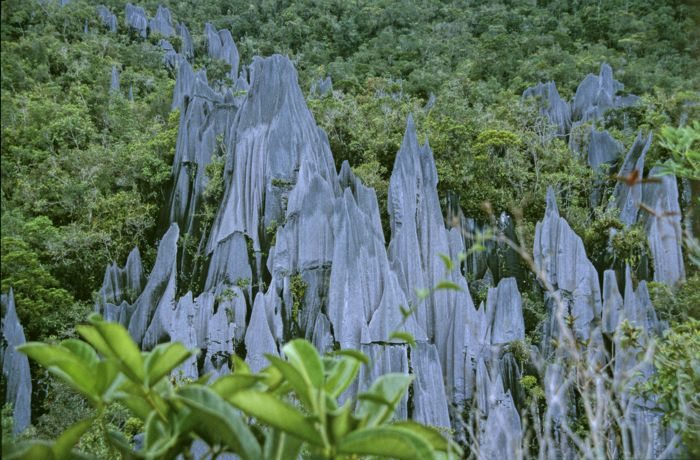 As I look out the window of the small twin-engine airplane that is taking me to my destination,  I am overwhelmed with the vastness of the jungle of Malaysian Borneo.

We are en route to Gunung Mulu National Park in Sarawak, Borneo to see the Pinnacle.

Here is where my husband and I will be climbing to the Pinnacles, a stone forest jutting 45 metres out of the earth, in razor-sharp formations.

Part of the fun and challenge is getting to the Mulu Pinnacles.

Gunung Mulu is a remote National park reached only by plane and a short truck ride will take you to the park’s headquarters in the middle of the jungle.

It is here that we book our dorm for the night and then look for people to trek to the Pinnacles with.  It helps to share the costs of the boat and guide otherwise it can be quite expensive.

Not an Easy Journey

The Pinnacles is not an easy undertaking. You must carry your own food to last for 3 days and carry with you on your back.

The trek itself involves a 2 hour boat ride to the start of an 8.9 km trail which takes you to camp 5 situated at the base of the Pinnacles.

We boarded our small motor boat at 7:00 am and started our journey up the Melinau River, stopping at  Wind Cave and Clearwater Caves.  The longest cave passage in South-East Asia.

The water was low at this time of year and our driver and navigator had their hands full pulling our boat through the shallow river while avoiding rocks and logs.  We were let off at the entrance to the trail, where arrangements were made to be picked up in two days.

The Trek to the Pinnacles

Within one km of our 8.8km hike we had our first of 2 river crossings.  It was pretty deep and a rope was attached across the river as a safety line to keep from falling over as the water rushed passed.

We all made it safely and managed to keep our packs dry, but nobody could escape the leaches.  They smuggled their way into our socks and even though we did a thorough check, we still entered camp 5 a bloody mess.

We kept up a steady pace and reached our second river crossing in 2 hours.  This one wasn’t quite as intimidating.  No rope was provided, but it was only about 2 feet deep and the water was moving at a leisurely speed.–

We all did our required leach assessment and were on our way.

We made it to the Pinnacles base camp by early afternoon and had time to enjoy the views and went for a walk along the headhunters trail.

It is a beautiful location, surrounded by large cliffs,  a quiet stream and lush jungle. We made our dinner of noodle soup and crackers, played some cards and enjoyed meeting new friends.

In the early evening the rain came with a vengeance and we worried that we would not be able to climb to the Pinnacles the following morning.

The park rangers are very strict about not letting people on the trail if it is too dangerous, and this was our one and only shot.

No Pinnacles. No refund. Even if the weather is bad.

Needless to say, nobody slept well in our basic accommodation of vinyl mats placed in a raised wooden platform.

The rain was relentless all night, but it managed to stop in the morning and thankfully we were allowed to climb.

We joined our guide Micheal at 6:00 to begin our climb. For the first hour Micheal kept up a furious pace and it was exhilarating to be climbing with such determination.

After a while, he fell back to stay with the slower climbers and we were on our own until we reached the upper portion of the climb, the 17 aluminum ladders.

Many people who try to climb the Pinnacles do not make it to the lookout.  It is not a high climb, it is steep, exhausting and it is technically challenging with no safety ropes.

We crossed crevasses on metal beams, balanced on rocks while holding onto a rope over head and climbed up ladders attached to the side of the cliff.  We had a blast, but I can see how some people would be very uncomfortable.

An hour later we emerged to the Awesome sight of the Pinnacles.

Giant grey and white stones, jut out of the jungle like razor sharp sharks teeth.  They were majestically poised for our viewing.

The sight of the Pinnacles was a magnificent payoff to a difficult and exciting climb.

Soon the clouds rolled in bringing an ominous feel to the pinnacles.  That was our cue to leave as we had to be down before the weather rolled in.

5 hours later and a slippery and exhausting climb down, we were back at camp showering and relaxing.

The break didn’t last for long, however.

The following day we had to hike back the 8 km to meet our ride back to Gunung Mulu park headquarters.

We only had a short break upon our return as we had to hike 3 more km to Deer Cave, the worlds largest cave opening.–

Here we witnessed the phenomenon of 2 million bats emerging from the depths of darkness to perform a ballet in the twilight sky.

It was all I could do to put one foot in front of the other walking along the path, but once the bats appeared, it was worth the exertion.

A giant line of bats circled above becoming longer with each pass until an endless black spiral was formed overhead. It was a wonder of nature.

To explore everything in Gunung Mulu National park could take months. The Sarawak Chamber, the largest cave chamber in the world, rock climbing,  the headhunters trail, The summit of Gunung Mulu and the Bario and Kelabit Highlands.

We only scratched the surface with our 5 days doing the Pinnacle Trek, but I am eagerly looking forward to returning in the near future to explore its vastness in depth.