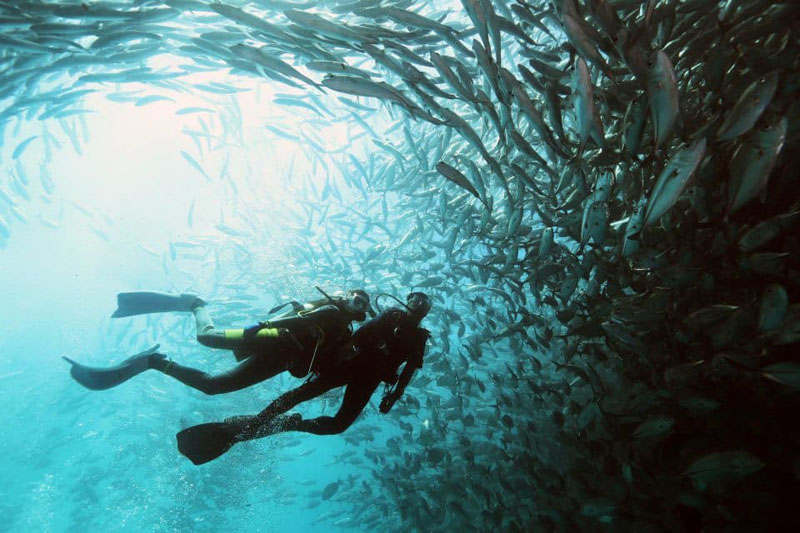 If I sum up Sabah diving in one word, it is diversity. Whether you are into muck diving, diving in Sipadan, or exploring colorful coral, this region of Malaysian Borneo will leave you speechless.

The uniqueness of Sabah dive sites lie in that you can see both sea fans, large pelagics and say, pygmy seahorses and frogfish, in a single dive.

It’s truly one of the most complete diving holidays in the world.

Yet, most travelers have only heard about Sipadan Island and its resident barracuda tornado.

While Sipadan diving is reason enough to visit, the state of Sabah has many other gems.

In fact, some of my favorites lie outside Sipadan! Read up for a brief guide.

What if I told you there’s an unspoiled island, filled with a resident school of Devil Rays that far of numbers any rays seen at Sipadan Island itself?

Not only that, but that it’s also sprinkled with abandoned World War II buildings and a hilly rainforest to marvel at during your surface intervals?

Only an hour away by speedboat from Semporna, Si Amil’s nine dive sites have everything from big pelagics and fantastic variety of sea fans and hard coral to colorful macro and World War II wrecks.

Night dives are quite special here as well, with sightings of bamboo sharks and rainbow runners being a common occurrence.

Better yet? With all eyes on Sipadan, Si Amil remains one of the last frontiers of Sabah diving.

Insider tip: make sure you ask for a Si Amil Island boat trip at the time of booking, as many dive resorts only plan trips there upon request.

I can confirm this from my experience at Borneo Divers Mabul Resort.

Speaking of which, if you still want to dive Sipadan, Borneo Divers is one of the few resorts that offer you not two, but four boat dives on a single Sipadan trip for no extra charge.

Froggy’s is commonly regarded as the muck diving capital of Mabul, Sabah. Poor visibility means this dive site is enjoyed by Eagle-eyed macro diving junkies only. Make sure you have a good guide!

Mandarin fish, flamboyant cuttlefish, lobsters, octopus, garden eels, and legions of frogfish are frequently spotted. Speaking of frogfish, this dive site got its name due to the many different varieties, shapes, and colors of its resident frogfish.

Quite a sight indeed.

During my stay at the Seaventures Dive Resort, I was marveled at the incredible marine life and artificial reefs right underneath it.

Large schools of yellowtail trevally, tiny cuttlefish, cute juvenile yellow box fish, and giant groupers are some of the daytime residents of this converted oil rig.

You can even see schools of glassfish feeding by the surface from the highest platform of the rig!

At night, a whole new world is unveiled: from elusive red orange/blue spotted flamboyant cuttlefish and schooling pipefish to Chevron barracudas and fat moray eels grace you with their presence.

It was fascinating to see such a volume of macro and schooling fish in a single dive.

As I enjoyed unlimited house reef dives during my stay, I can assure you Seaventures is one of the best dive sites in Sabah. Don’t miss it!

Unbeknownst to many, an island 40 minutes away from Semporna offers a beautiful combination of both macro and large pelagics–the common denominator of Sabah’s top dive sites.

It’s easy for Mataking Island to slip under the radar though, overshadowed by its next-door neighbor Sipadan.

Located in Alice channel, the Malaysian-Philippine border, Mataking’s 12 dive sites could keep you busy for an entire holiday.

Eagle rays, manta rays, whale sharks, grey reef sharks are some of the pelagics that wander the 100-meter-deep channel, attracted by the strong currents in the North.

Just going on a day trip?

Diving Season: Mar. to Aug.; Apr. to May for hammerheads

Ten different dive sites, most being walls, have a sick visibility as well–up to 60 meters in season.

As such, all of them are rated 5 out of five stars by most experienced divers.

Please note though, Layang Layang is unreachable in the rainy season, which typically runs between November and February.

Diving Season: Apr. to Dec.; best in Jul. and Aug.

It‘s just as likely to spot an 80-year-old Hawksbill Turtle and Cockscomb Oyster as it is to see a couple of Chromodoris and Nembrotha nudibranch right next to Crocodile Flatheads.

In one dive, I personally saw a few old Hawksbill Turtles; a peacock mantis shrimp being attacked by a few schooling fish; a massive school of traveling trevally, rivaling Sipadan’s resident Barracuda tornado; several types of nudibranch (particularly black worm); in addition to the largest crocodile fish I have seen in 70 dives.

I was in awe–how the heck had I never heard about this place?! Now you know!

Any additions to our Sabah diving guide? Share them below

Maria Alexandra Laborde has lived, studied and traveled extensively throughout the Caribbean, Middle East, and North Africa.Maria is the author of LatinAbroad: The Nomadic Translator, where she shares her inspiration, and advice after traveling solo to more than 20 countries across 4 continents including her love for the Arab world on her niche blog Travel The Middle East.