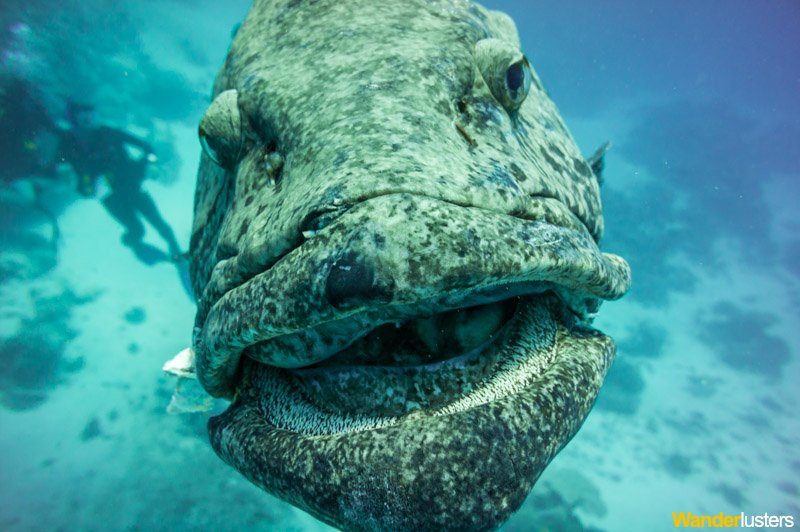 The Great Barrier Reef, one of the natural wonders of our Earth.

Located off the coast of Northern Queensland in the Coral Sea the reef is home to the most diverse coral eco system on the planet.

Famed for the wealth of marine life that inhabit this colorful oceanic wonderland, it has become a Mecca for scuba divers and attracts 1.6 million visitors each year.

With famous sites such as the Cod Hole, Steve’s Bommie, Lighthouse Bommie and the Snake Pit, diving the Great Barrier Reef is the ultimate scuba adventure.

A marginal stretch of water the Coral Sea extends from the shores of northeast Australia to Papua New Guinea, the Solomon Islands and New Caledonia, and incorporates not just the Great Barrier Reef but the Coral Sea Islands Territory as well.

In my opinion the best way to explore this underwater paradise is to join one of the many dive expeditions that explore the reef system on a daily basis.

From snorkeling near the safety of a pontoon on the inner reefs to extreme exposed ocean diving out at Osprey Reef, there’s something for everyone to enjoy.

Having trained as a Divemaster while living in Costa Rica I chose to volunteer with the crew of a 5 star liveaboard and spent 14 days working on the dive deck in exchange for the opportunity to dive the reef for free. There are a number of companies that offer a work/experience exchange program on the reef however there are only two that cater for the more adventurous aquatic explorers.

The trip itself is noted for its exceptional itinerary and provides the opportunity to dive not just the Great Barrier Reef but Osprey Reef some 150km from the shore.

The itinerary breaks free from the confines of the inner reef and takes divers straight to the gin clear waters of the ribbon reefs that line the edge of the underwater coral playground.

The Cod Hole is perhaps the best-known dive site on the reef and is found on the northeast edge of Ribbon Reef #10.

While the site is called The Cod Hole it’s not home to the regular run of the mill cod, these cod are monsters. Inhabited by Queensland grouper they are known as potato cod thanks to the potato-shaped markings on their scales, and when I describe them as monsters I’m really not exaggerating.

Diving the Cod Hole is quite a trip.

With huge lips and round bulbous eyes the Queensland groupers are quite a sight to behold, and growing to a colossal size they are very often as large as the divers who share the ocean with them for a few hours each day.

Although their presence is a little intimidating they are gentle giants and seem content to entertain the inquisitive divers who visit their home.

In times past divers would fill their pockets with bread and feed the cod but this practice is no longer endorsed, although the cod frequently follow divers to check they’re not harboring any baked goods in their scuba gear!

Steve’s Bommie provides another eyeopening dive. A rocky outcrop that reaches up from the sea bed 40m below, it offers respite for marine life moving about the reef system.

Home to a number of permanent residents this is a great dive for macro life and I was thrilled to spot a leafy scorpion fish, a rather rare frogfish, pipefish and some nudibranchs.

By the end of my first full day of diving on the reef I had seen more species of fish than in my whole diving career.

As the sun set on day one we waved goodbye to the land and steamed out into the ocean, on waking at dawn were treated to a 360 degree ocean horizon and a spectacular view over Osprey Reef.

A submerged atoll Osprey forms part of the Northwest Group of islands in the Coral Sea and while just 25km in length it has become an oasis of life amidst the deserted surrounding ocean.

Forming a plateau, the walls of the reef rise from depths of up to 2000m and often tempt creatures of the deep to visit the surface and bask in the warmer waters.

One particularly special resident is the dwarf form of Nautilus Pompilius. Isolated out on the reef the population has no connection with others of their kind and has formed a colony completely unaffected by the genealogy of their kin some 100 nautical miles away.

As part of an agreement with a research lab back on the mainland the crew had been instructed to collect samples of Nautilus for scientific study. Living at depths of over 1000m they leave the comforts of the deep at night to feed at around 200m.

We know very little about the Nautilus and their ability to function at such great depths and it is hoped through research we can better understand the nature of these fascinating creatures and therefore life on the reef as a whole.

Casting lobster pots filled with rotting chicken down to around 300m overnight, the next morning provides a rare opportunity to see these fascinating creatures up close.

During our first dive the crew hauled the pots from the depths and released the Nautilus at about 25m where we were invited to interact with this resident of the deep.

Nautilus sightings are usually reserved for those willing to push the boundaries of human exploration and it was a real thrill to see one up close.

The diving out at Osprey is mind-blowing. The cool currents from the depths bring nutrient-rich waters and a diverse mix of marine life to within reach of land lovers, and consequently diving here is a truly unique experience.

Sky scrapers of coral and highways of crevasses litter the landscape and host all manner of aquatic life.

After each full day of diving there is also the opportunity to join the crew for a night dive.

Like many environments around the world diving, a location at night is entirely different from diving it during the day.

Descending for a night dive out at Osprey is an adrenaline-inducing experience, blind but for a trusty flashlight your gaze is much more focused than during the day and allows you to concentrate on the life within the confines of the torch light.

Many of the larger fish have discovered that their hunting abilities are greatly increased by the assistance of flashlights and it’s easy to see why they have been nicknamed flashlight fish.

As we explore the inky darkness the reef sharks and trevally tag along and hunt out their prey, swarming in packs when the beam of light passes over a small reef fish, they dive towards the light in a bid to catch their supper.

If adrenaline is your drug of choice then a trip to Osprey is a must. On our second day out in the ocean we were invited to take part in the shark feed dive.

The ultimate diving experience it began as soon as we entered the water. Descending into the depths dark shadows were circling below, as the sharks came into view my heart leaped into my mouth when I realized how many there were.

Encircling the edge of the reef they were obviously familiar with the protocols as they had left a space on the coral for the divers to perch.

The next 20 minutes were filled with action. As the crew lowered a trash can full of tuna heads the sharks began to frenzy.

Releasing the tuna the crew retreated and carnage ensued. Watching as the sharks ripped at the flesh I was mesmerized and any sense of fear forgotten. While no one has ever been injured while taking part in the dive it’s important to have a healthy respect for these lethal predators and keep your wits about you.

Sudden rapid movements are obviously not advised however it is likely that you’ll be so enthralled in the feed that any desire to escape will leave your mind entirely.

Diving the Great Barrier Reef is sure to be a bucket list item for many however it’s not until you’re surrounded by the rich diversity of life that you truly comprehend just how fortunate we are to have access to such a richly diverse area of our planet.

Much has been done to protect the waters surrounding the reef of late however there is so much still to achieve if we are to preserve it for generations to come.

As a scuba fanatic I’m thrilled that I had the opportunity to spend a full two weeks out on the reef. Each dive site allows a glimpse into a different mini eco system on the reef and no two dives are ever the same.

I highly recommend the work/experience exchange programs that are on offer at a number of dive operations in Cairns. Not only will you save yourself a few thousand dollars but you will add valuable dive knowledge and experience to your scuba CV.

Freelance writer and blogger Charli is a digital nomad currently travelling the world with her other half Ben. Whether backpacking through Central America or road tripping around Australia they embrace each and every opportunity for adventure. Read more about their insatiable wanderlust on their blog,