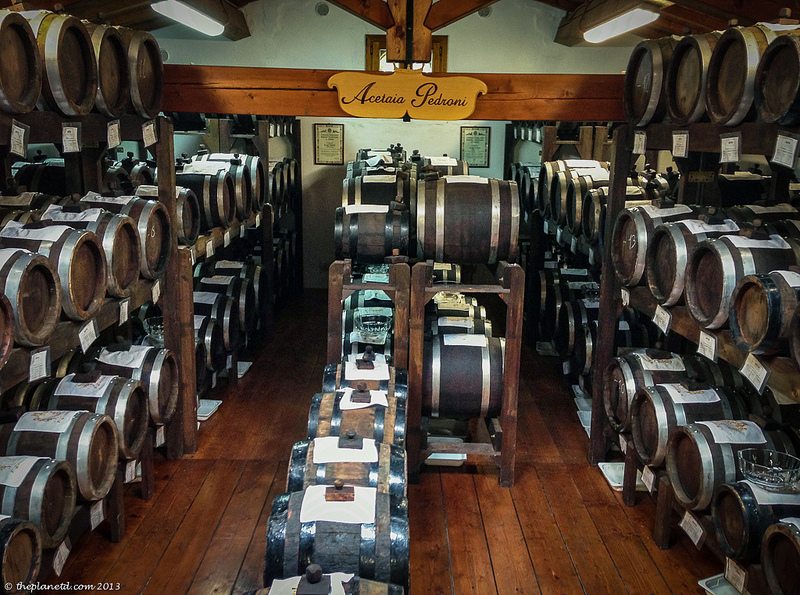 When we were told that we'd be going learn how Traditional Balsamic Vinegar was made, I will admit, I wasn't too excited.

You see before going to Emilia Romagna in Italy, I didn't have much of an appreciation for food.

We've tasted meals by some of the top chefs in the world, eaten at Michelin Star restaurants and dined in 5 star venues.

While we loved the food, we never had an appreciation for the process. That all changed in Emilia Romagna.

It was the people of the region who made us both fall in love with food.

Food is a passion for Emilia Romagna and by spending three weeks in Bologna while doing day trips around the region, well we developed a passion for food as well.

Dave and I are more about the people when we travel.

We can have the most expensive food, hotel room or seat in the house, but if the people aren't interesting, well, who cares really?

The People Make The Experience

In Emilia Romagna, it's all about the people, so we cared very much!

The food that they make and eat and taste, all have a history to it.

Every place we visited had a story and every person we met had large, memorable personalities. The people of this region are people you'll never forget.

And that is what it was like when we met the folks at family owned and operated Acetaia Pedroni in Rubbiara near the ancient town of Modena.

This Balsamic producer  is one of the oldest in the province, dating back to 1862.

It has been operating for 150 years of uninterrupted service by the same family passed down through generations. And they are very proud of that distinction.

The key word when talking about balsamic vinegar is “Traditional.”

Traditional balsamic isn't the typical vinegar you buy at Costco.

It's so thick and delicious that bottles of Traditional Balsamic vinegar sell for up to $100 US for 100 ml.

Any other balsamic just isn't the same. The true Aceto Balsamico Tradizionale needs to be aged a minimum of 12 years to be certified.

How Balsamic Vinegar is made

The process of making balsamic vinegar is fascinating. It starts by picking the same grapes that are used for Lambrusco and Trebbiano grapes.

The first batch is made in October after grape harvesting.

The grapes are boiled and then the aging begins.

The liquid is put in the largest barrel where it is left for a year.

After a year, the balsamic master comes back and moves a portion of vinegar from the large barrel into smaller barrels.

There are a series of 5 barrels of all different sizes, and the aged vinegar is moved each year from barrel to barrel, large to small.

It's a meticulous system, moving a small percentage of vinegar from one barrel to another until it reaches the final smallest cask which will eventually be aged enough to make the Aceto Balsamico Tradizionale.

There are many rules and traditions and an expert taster comes to check the balsamic.

The vinegar is scored out of a total points of 200 and if they score too low, it all goes back in the barrel for at least another year.

The process basically goes on forever.

Barrels are stained with ancient vinegar, and the deeper the colour, the older the barrel.

The vinegar soaks up all that good taste from decades past.

A lot of Work to make one small bottle of aged balsamic.

To make traditional balsamic, only 10% of the smallest barrel can be used. That's one measly litre of balsamic!

This balsamic maker is one of the largest in the area and when we asked them how many litres they make each year, we are told only 500.

It's amazing that people have the patience for this.

Something we noticed about this region of Italy though, is that everything is done with great passion and care.

Guiseppe, the grandfather of the operation was one of the first people involved in the Slow Food movement in Italy.

His founding member plaque is displayed prominently in the dining room of his house.

It's a movement created in the late '80s to counter the fast food that was taking over the world at the time.

By the looks of things in most places, fast food is the norm, but in Emilia Romagna, the movement stuck and in this region of Italy, it's all about enjoying good eats in a relaxed and slow environment.

After our tour of the balsamic production, we had the chance to sample their efforts.

Imagine our surprise when they put the 25 and 40-year-old bottles of balsamic on the table!

Proper traditional balsamic should never be cooked or mixed in dressing for salad.

It is meant to be savoured and poured over your favourite foods. So we poured it over everything!

Think balsamic and gelato won't mix? Think again, it is a heavenly delight in your mouth!

Our favourite treat during our entire stay was to have aged balsamic vinegar drizzled over fresh Parmigiano-Reggiano (parmesan cheese for the English speakers out there) It is served everywhere at every meal.

Oh how we miss our chunks of delicious parmesan fresh from Parma with our aged balsamic from Modena. Can we go back to Bologna please?

The producers do make younger balsamics as well and these are the vinegars meant to be used in cooking and on your salads.

We had chicken cooked in an 8 year balsamic and we had balsamic infused pork as well.

Have you noticed something about this meal? There is no way it could possibly be eaten slow.

With 5-courses, aged balsamic, bottles of Lambrusco (sparkling red wine of the region) you would never want to leave.

But then again, with Guiseppe entering every few minutes with a big smile on his face yelling, andiamo, andiamo!

We got the hint that maybe we should be going.

But then again, I think that Pietro was just loving his little ongoing joke.

The slow food guy telling the tourists to hurry up?

That just made him laugh and laugh.

Things to do in Bologna