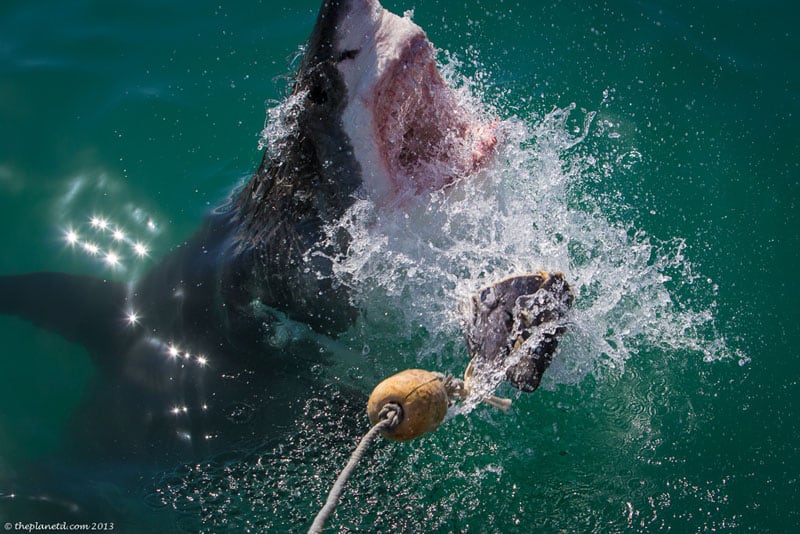 It’s the ultimate adventure. We never thought we’d be cage diving with great white sharks in our lives and yet here we were climbing in the cage off the coast of South Africa to witness these creatures in person.

This post is in partnership with South Africa tourism, our shark diving tour was courtesy of the tourism board.

This only happens in the movies or on TV, doesn’t it? But now, we Dave and Deb are coming face to face with great white sharks.

As we entered the offices of White Shark Projects in Gansbaai, South Africa, we couldn’t understand all the sour faces. People ate their buffet breakfasts in silence and barely a smile was cracked when we said ‘hello.’

We wondered what sort of operation we had run into? Why was everyone sulking at their tables?

It turns out, that as we started to talk to more people on the way out to our dive site, our fellow passengers were terrified!

We were diving with the most feared creature of the ocean and yet for some reason, I was excited.

Anyone who knows me or has traveled with us knows that Dave is the daredevil of this relationship.

I’ll try things, but most of the time I fret about it and lose sleep over the scary things that we are about to do the next day.

However, when it came to the Great White Shark cage diving experience, we were both equally excited.

When diving with Great White Sharks at this time of year (January) you don’t have to take the long boat ride out to sea in terribly rough waters.

Today, we had a short 10-minute ride to our dive site on our 36-foot boat.

That didn’t stop people from losing their lunch though, one poor woman who was on her honeymoon and had such bad seasickness, she wasn’t able to get in the water even once!

Tensions were high and many people were chickening out. When our guide asked us who would like to go in the first group, there was barely a hand raised in the air.

Dave and I were in a jumble because we were trying to split up our dives so that we could take footage of one another, but in the end, we ended up going together in the second group because that’s just the way it worked out.

At first, I was upset that we were in group two.

What if we missed the best shark activity in the beginning? As it turns out, the longer we stay in the area, the more interested the sharks become.

The crew started chumming the water with fish blood to attract the sharks and when the first one arrived, the excitement mounted.

It was time to get in the cage and see them for ourselves.

Sadly, sharks are the most misunderstood creatures in the world and they are at great risk of extinction.

40 million sharks are killed each year for their fins alone to feed the Asian Market’s desire for shark fin soup.

Sharks are Getting Smaller

Great white sharks can reach a length of 5-6 meters, but the people at White Shark Projects told us that a sighting that big is becoming rarer each year.

It is the big sharks that are being slaughtered at high rates.

Considering a female shark needs to be 4 metres long before she can mate, they are killing off the reproduction process. Sharks can’t reproduce as quickly as they are being hunted killed.

Diving with these beauties not only is a thrill, but it helps us to better understand the shark.

They are curious creatures and most great white shark attacks are non-fatal.

When you see a shark up close and personal, all your fear disappears.

Everything you ever saw in the movies or on TV melts away and suddenly you see a beautiful creature who feels and thinks and has a natural curiosity.

Sharks have the most intelligent eyes.

You can see them scanning their prey and assessing the situation.

Our cage was bumped many times and never once did we feel threatened.

It felt as if they were coming in for a closer look. Hey, we were watching them after all, why can’t they take a look at us?

Diving in the cage with the Great white shark is an extremely exhilarating experience.

You don’t dive with any scuba equipment as the sharks are scared off by the bubbles.

Most of the action happens towards the surface anyway, so when diving with White Shark Projects, you simply hold your breath and dive down when the guide tells you to.

But you have to be fast.

During our first dive, we both seemed to miss the shark passing.

We went down too late, held our breath too long and then came up just as the shark was passing again.

Soon we figured out the rhythm. When the guide yells “down,” you go down quickly, watch the shark pass and head straight back up.

Don’t wait around for more things to happen, the shark has to turn around. Use that time to catch your breath.

If he comes back quickly, you’ll have had time to catch your breath and be back under the water before he passes again.

We were lucky we dove with a bunch of people who weren’t keen on shark diving.

Each time the captain asked who wants to go in next, nobody replied!

Both Dave and I had three turns in the cage and as the water became more filled with fish guts and blood, the sharks became more excitable.

They jumped after the fish head that the bait guy kept throwing out with more gusto and came out of the water breaching for us on more than one occasion.

By the time we reached our third go at diving, I was starting to feel a bit ill. The smell of rotten fish was starting to get to me and after swallowing a bit of salty water due to taking a breath as the waves hit, nausea became more intense.

Danger for our Guide

I am so glad that I stayed in the water though because just as our dive was ending, the shark grabbed onto the bait so hard and flipped it around that our guide was pulled in the water! It happened right over my head and I caught it all on video!

My mind was racing, I was in a state of shock for what seemed like an eternity, but when watching the video, it was a nano-second.

At first, I thought ‘they must do this all the time at the end of the dive to make it more exciting,’ then I realized what happened.

Luckily he didn’t fall too far and the shark was busy with its bait, but it certainly made for an exciting ending to an exciting day.

Check out more and see us swim with Galapagos sharks or when we swam with sharks in Belize we’ve encountered several sharks in our travels and are happy to add the Great White to our list.

To book your own shark diving experience, visit White Shark Projects prices include The Dive, Breakfast, Hot Soup upon your return, wets suits and dive gear and guides. As well as delicious lollipops for seasickness.

Read More: 28 Reasons Why South Africa Should Be on Your Bucket List