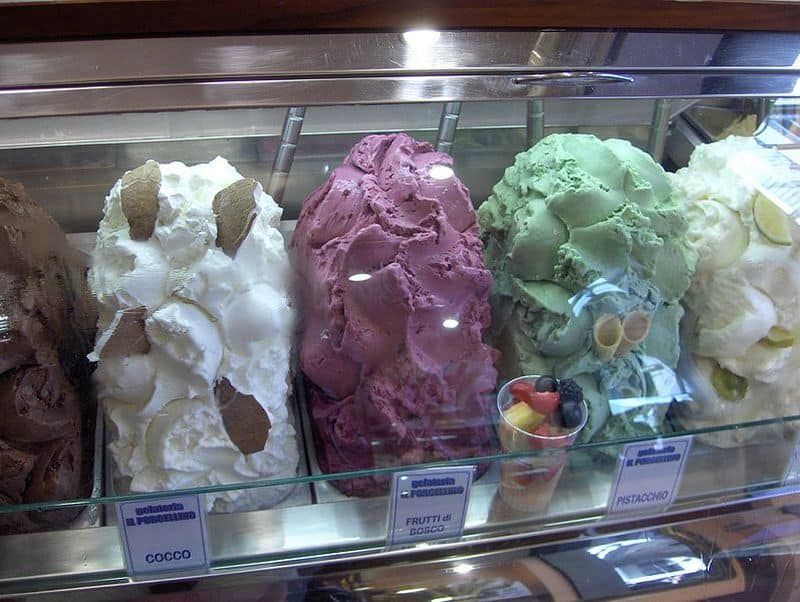 Before we travelled to Italy, we really didn't know the difference between gelato and ice cream.

We thought it was simply the Italian word for ice cream. Gasp! Don't ever say that to an Italian.

Gelato is very different from ice cream and if you have ever been to Italy, you will agree. But how do you know a good gelato from a bad gelato?

Well, just outside of Bologna, you will find one of the largest gelato equipment manufacturers in the world.

Carpigiani Gelato not only sells quality gelato machines, they also offer courses to the people who buy them. And here we thought all gelato was made by hand.

If you love Gelato, this tour may intrigue you.

A short half-hour bus ride (€2) from downtown Bologna will take you to the manufacturer where you can tour the museum and taste the gelato that students make.

I have to admit, learning that the Romans and Greeks were the first gelato makers by taking ice down from the mountains and flavoring it themselves wasn't much of a stretch.

That's sort of like saying someone was the first juice maker by squeezing oranges or adding lemons to water.

But, really how much can you come up with when it comes to the history of ice cream making?

If you are looking to start your own gelato business, Carpigiani offers a week-long course for around €900.

They're main business is selling machines though and if you do decide to open your own gelato shop, you will need to invest in one.

If by the end of the week, you are feeling confident and buy a machine at about €20,000, you'll have that €900 put towards the cost of your machine.

Like every new business though, do your research and think long and hard about it before jumping in feet first.

We were not taking the course and chances are you won't be either, but if you are like us, you will want to learn all about how to choose the best gelato.

Plus, if you visit the museum, they'll send gelato home with you!

They donate thousands of kilos a year to hospitals, orphanages and homeless shelters and they still can't get rid of it all, so take advantage and bring some back for a midnight snack!

How to Spot Good Gelato

Here are the tips we learned that help you eat the very best gelato during your next vacation in Italy.

So instead of eating a bunch of empty calories as you do in ice cream, you are eating pure cream when indulging in gelato.

Ice cream can have over 100% air pumped into a scoop whereas the average air found in gelato is 35%.

What does that mean?

Too Much Air in Ice Cream

Well, when people make ice cream, they make sure that when the milk fat and sugar are mixing, a lot of air is being pumped into the mix to take up more space and give the illusion that you are receiving more product.

Ah, that explains the supersize helpings of the US compared to the tiny servings in Italy.

I always feel so satisfied when I have a single scoop in Bologna compared to a giant helping in the US!

Another difference between gelato and ice cream is the amount of fat and sugar.

So, don't feel guilty eating gelato, embrace it and join the Italians.

hey claim that it is very healthy for you and who are we to argue?

How to Spot Fake Gelato

So now that you know the difference between gelato and ice cream, it's important to find the right gelato shop to buy from.

Many shops in Italy claim to serve proper gelato, but they pump air into it and put in powdered flavouring as opposed to fresh.

If you are in a very touristy destination, you will find a lot of impostors churning out bad gelato to unsuspecting tourists.

Don't be one of them, find the best gelato in town!

See that wonderful looking gelato up there all swirly and bright in colour? Doesn't it look delicious?

The above is not good gelato, avoid shops like this one that make the ice cream look fancy and high. Here is why.

Never buy gelato that is pumped high above their containers.

First of all, they won't stay cold and fresh and second, this means that the gelato has had a lot of air pumped into it.

You want rich and creamy gelato, not light and airy. So look for gelato that is flat in it's cooler. This is the real deal.

As I said above, a lot of touristy gelato makers will add powdered artificial flavouring.

It's easy to spot the fakes, just look at the colour.

There are three tells that will easily help you identify bad gelato.

And finally, you are entitled to a dollop of real cream on top of your gelato and you should be offered the choice of two flavours.

Pairing Gelato flavours is important so don't be afraid to ask the gelato master.

They'll know what you should have alongside your favourite flavour.

Most of all, enjoy!

Don't be intimidated by Gelato, walk into that gelateria and show them who's boss.

You know what you're doing now.

And seriously, how can one ever go back to ice cream once you've had gelato?

It's more satisfying, better for you an oh so Heavenly.

I can't understand it when I see tourists in Bologna walking down the street eating a McFlurry when there's delicious gelato next door.

Rome Food Tour, Our First Culinary Journey
Best of Bologna, 10 Must do's to Enjoy your Stay
Fast Cars, Get Your Adrenaline Fix with Ferarri
Traditional Balsamic, 150 Years in the Making

Our Trip to Italy was part of the This is a Blog Ville campaign, created and managed by iambassador in partnership with the Emilia-Romagna tourism board.