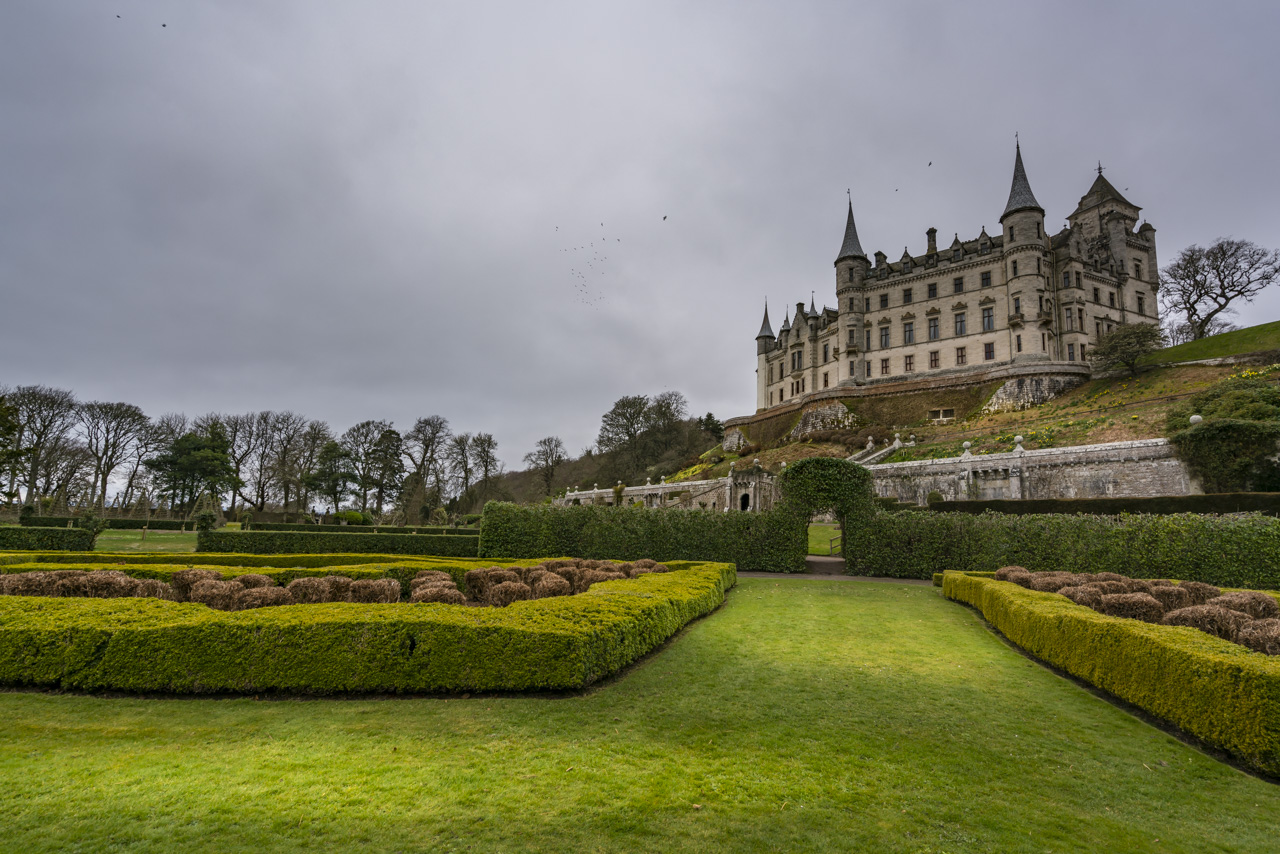 Are you thinking of driving the North Coast 500? Make sure to add Dunrobin Castle to your itinerary.

The Scottish Highlands are home to arguably one of the most dramatic coastlines in the world, not to mention rich history, epic battles, and storied architecture.

Driving through the region, you feel like you’re a world away from the frenzied, urban energy of Edinburgh, and wonderfully so—quaint fishing villages, cafes, and dramatic castles make the highlands a stunning getaway.

Dunrobin Castle: What’s it all about?

Dunrobin Castle is a quintessential romantic castle and the ancestral home of the Earls and Dukes of Sutherland.

It’s a castle that feels like it ought to belong in a fairytale and a must-see for anyone traveling through the highlands.

It’s located on the east coast of the northern highlands, just north of Golspie and Dornoch villages and is one of the largest in northern Scotland.

Dunrobin is definitely a good way to channel old Scotland!

The castle contains an impressive 189 rooms that have all been decorated extravagantly (and remain perfectly preserved).

From inside the castle, you can get some fabulous views of the sea and the surrounding gardens.

A walk through those gardens will prove no less spectacular as falcons soar above your head thanks to a daily falconry display—the only of its kind in the region!

What makes Dunrobin so special is the fact that you can walk through it and the surrounding gardens without feeling like you’re visiting a museum—the rooms, though lavish, feel authentic and welcoming in their presentation rather than contrived.

Information is readily available to visitors, and the grounds are well-maintained and downright stunning.

The whole property feels a bit like a Scottish Disney Castle.

Dating back to the Middle Ages (circa the 1300s), Dunrobin Castle is one of the oldest continuously inhabited houses in Scotland, having been home to the Earls and Dukes of Sutherland, and then later used as a boarding school.

The building has undergone a number of changes since then, including being remodeled by famous architect Sir Charles Barry, but a portion of the original structure is still visible from the interior courtyard.

Since the castle was built, ownership has been passed down to a variety of Sutherland royals who each added a particular flare, protection, and expansions with series of renovations.

A good portion of the original structure is still visible today; the oldest part of the castle, the tower-keep, remains vaulted on every floor and has walls two meters thick!

During World War I, the castle was used as a naval hospital and subsequently endured a fire that damaged a large part of its interior.

Afterward, the main tower and clock tower were renovated to embody more of a Scottish Renaissance style.

The castle’s final incarnation prior to its public opening in 1973 was as a boys boarding school from 1965 to 1972.

To this day, the Sutherland family retains a private area of the house—but this part is not open to the public.

One thing you should try to see when you visit are the carved cat gargoyles that rest atop the castle’s windows—this is an ode to the Scottish family crest, which features the wildcat.

What to expect at Dunrobin Castle

Once you arrive in Dunrobin, you’ll find that there are both group and self-guided tours, although the latter is more strongly encouraged (castle guides are available in the main rooms to answer any questions guests might have).

Mostly all the castle grounds are accessible to the public, with the exception of the Sutherland family private area.

And of the 189 rooms of the castle’s interior, visitors are only able to take a tour through about 20 of them including the drawing-room, library, study, bedrooms, nurseries, and more.

This is more than enough though, as many of the rooms start to look the same after a while.

Still, each of the rooms has its own unique flair and includes a variety of paintings and portraits.

And no room is without some kind of collection of furniture, photographs, artwork, uniforms, china or family memorabilia.

Dunrobin is deeply inspired by French architecture, and the surrounding gardens were modeled after the Garden of Versailles—the resemblance is uncanny!

Once you make your way out to the terrace, the garden views expand into a spectacular 360-degree view of the entire property and sea.

Since visiting Dunrobin Castle essentially feels like you’re stepping into a Scottish version of Disney Castle, come prepared to immerse yourself in a magical enclave in the middle of the northern highlands.

Unfortunately, photos are not permitted inside, which is a bit of bummer, but then again not having your phone or camera glued to your hand does make for a more immersive experience.

Save the photos for the gardens and exterior shots of the castle perched on the hill.

Be sure not to miss the falconry display in the garden.

With the exception of Sundays, there’s usually an employee there who can give you an overview of the display and show you a thing or two about falcons.

If you’re lucky, you’ll have the opportunity to watch one of those birds of prey land and take off from your wrist!

There’s also a little museum at the edge of the grounds that houses historic artifacts like spearheads and Pictish stones from the area, as well as the taxidermy that has been collected by castle inhabitants over the years.

When all is said and done, you can visit the gift shop and grab a bite at the castle tea room which offers light meals and snacks.

Base Yourself at one of These Great Hotels

We stayed at this 3 Star Hotel and loved it. Quaint rooms with great views and the selection of Single Malt Scotch in the bar is to die for. Perfect for any history buff or whiskey lover.

If you are looking for 4-star luxury this is it. This 21 room hotel is situated on the golf course and has stunning views and beautiful rooms. And it includes breakfast!

It’s a good idea to leave at least a couple of hours for your visit to Dunrobin, as there’s a lot of things to see beyond the interior rooms.

You’ll want to take your time and enjoy the atmosphere of the place, which is at once magical and haunting thanks to its dense and fated past.

Where to Stay in London

Things to do on the Isle of Man