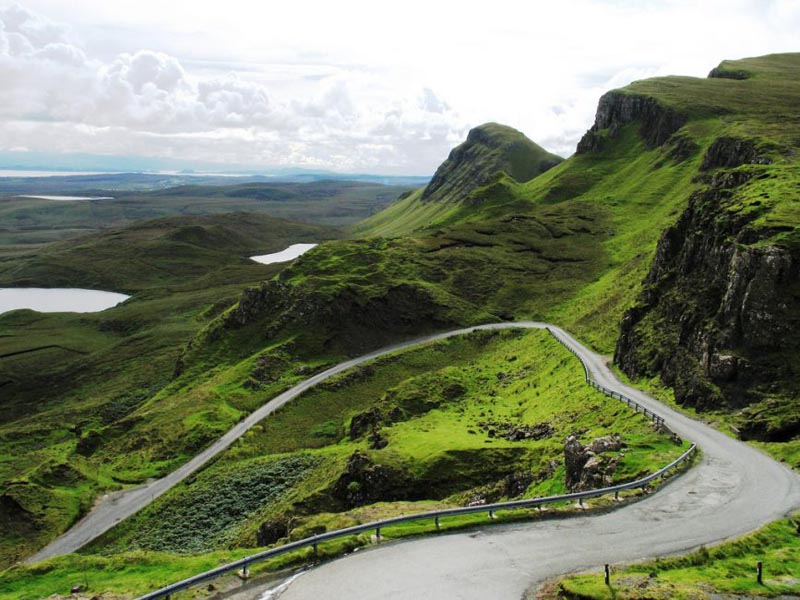 I love the expressions that I get when I tell people I lived in Edinburgh, Scotland for five years. (See, you just did it.)

Scotland is one of Europe’s wildest terrains.

From the raging waves pounding the North Sea coastline, to the pubs and tearooms of the capital streets, Scotland has a variety of experiences beyond the stereotypical images of tartan kilts and rainclouds.

While in the country I belonged to a local walking group that took a number of fun trips all across Scotland.

It’s hard to narrow it down to 7 favorites, but here are some of my favorite Scottish adventures.

Hopefully, you’ll have plenty of time on your trip to explore these and more to find your own.

1. Put Your Hand on the Center Stone of the Standing Stones of Callanish

You probably know of Stonehenge, made famous when Chevy Chase backed his car into one of the Neolithic stones in European Vacation. (While it would be hard to back a car into Stonehenge, sadly there IS a highway running right next to it.)

One of the oldest stone circles – many say centuries older than Stonehenge – is the Standing Stones of Callanish, found on a windswept plain on the west coast of Lewis, an island on the Outer Hebrides.

There’s not much here for miles, and the historians have more questions than answers about this stone, but one thing is certain: you’ll understand why people have been coming here for centuries by placing one hand on the center stone.

2. Visit the Moon… I mean, the Island of Staffa

If there were a place almost like the moon in Scotland, it would be the island of Staffa.

Getting here is no feat and isn’t possible on inclement weather days – you’ve got to get to Oban, Mull, or Iona and then grab an onward smaller boat to the island’s dock – which is simply a spot where boats can pull in and you can jump off.

The island is made up of s a stone that looks like some sort of human giant built the island.

Shown above is Fingal’s Cave, a spot that looks – and sounds – like something out of an Alfred Hitchcock film.  This place is strange and if you manage to get here (as I said, only on calm weather days is the final boat ride possible), you’ll never forget it.

Read: The Legend of the Giant’s Causeway for more on Basalt Columns in Ireland.

3. Spend the Night in a Haunted B&B

If you want to spend the night in a haunted castle (or B&B, or hotel, or normal apartment building), Scotland is the place to be – I’ve seen more ghosts and “unexplained” things there than anywhere else in my life.

Perhaps it’s all of the wars and battles that have been fought on these grounds, from the Vikings to the Scottish Clans to Scotland and England’s warring days (which are now mostly just political, thankfully).

My top recommendation would have been Lunan Lodge – without a doubt the most haunted place I have ever been to in my entire life.

I can’t even explain some of the things I’ve experienced here.  Sadly, I have just learned the owners have decided not to open the B&B this year.

However, there are plenty of other options – Airth Castle and Tulloch Castle are both very comfortable and have a lot of “strange goings on.”

Order Now: How The Scots invented The Modern World

Despite the weather, hiking is perhaps one of the most popular outdoor sports in Scotland – and for good reason, because there is plenty of gorgeous terrain to cover.

You are spoilt for options if you’re staying in Edinburgh, but if you’re heading north into the Highlands, consider munro bagging.

A Munro is simply a mountain over 3,000 ft.  Some people spend years trying to climb them all (“bagging”) – there are nearly 300 of them.

The most famous of all is Ben Nevis, which is the tallest mountain in the British Isles.

A great hike if you’re staying in Fort William, I would agree with most others in saying that the most picturesque trail up this Munro is the main route, known as the “Tourist Trail.”

Whenever hiking up mountains, small or large, please bring warm clothes, water, and make sure someone knows where you are going – bad weather can settle in rather swiftly.

5. Raise Your Glass in one of Scotland’s Oldest Pubs

A visit to some of Edinburgh’s many pubs that line the Royal Mile will leave you thinking most bars in the city are centuries old – or at least haven’t been cleaned in centuries.

But the bar that calls itself the city’s oldest, fact or not, is the Sheep Heid Inn, which is located behind Holyrood Park.

A walk in/around the park is a great way to stretch your legs, before kicking back a pint here in the pub.

While you are here, how about a game of skittles (bowling) – the alley here is still in use since built in the 16th century!

Visiting Scotland? Pick up your copy of The Lonely Planet Scotland Travel Guide

6. Practice Your Driving Skills on a Single Track Road

I actually didn’t think they still existed, but Scotland still has single track roads – roads that are made of one lane, with pullouts in various points along the road to allow for passing.

This is not for the weak of heart – you’ll need to remain vigilant of traffic and be prepared to pull over into a passing point ahead of meeting an oncoming car.  Y

ou may also want to practice courtesy and allow faster drivers to pass if you’re taking your time.

You might notice the above photo there are two lanes – the extra lane ends shortly. I was too scared by my driving partner’s somewhat harsh driving skills to get the camera back out!)

Edinburgh has plenty of adventures, and it’s hard to pick just one – but I will, and I’ll suggest you take one of the many haunted Edinburgh tours by Blackheart Entertainment.

Their guides are the best and will not only take you into some of the city’s darker, stranger spots, but they will also provide insightful commentary on the history of Edinburgh.

The city has a very quirky, strange history (you would too if you spend centuries being beaten up by neighbours from all sides) and the result is a wonderful atmospheric city we have today.

Feel like watching something Scottish? Rent or Buy the Academy Award winning Braveheart

Scotland has many more miles of hikes, shoreline, hills and valleys.

I encourage you to spare plenty of days, take your time, and explore the details of this colourful country.

There are adventures waiting around every corner.

Where to stay in Scotland:

About the Author: Andy Hayes is the author at Plum Delux  where he writes about light adventure travel.