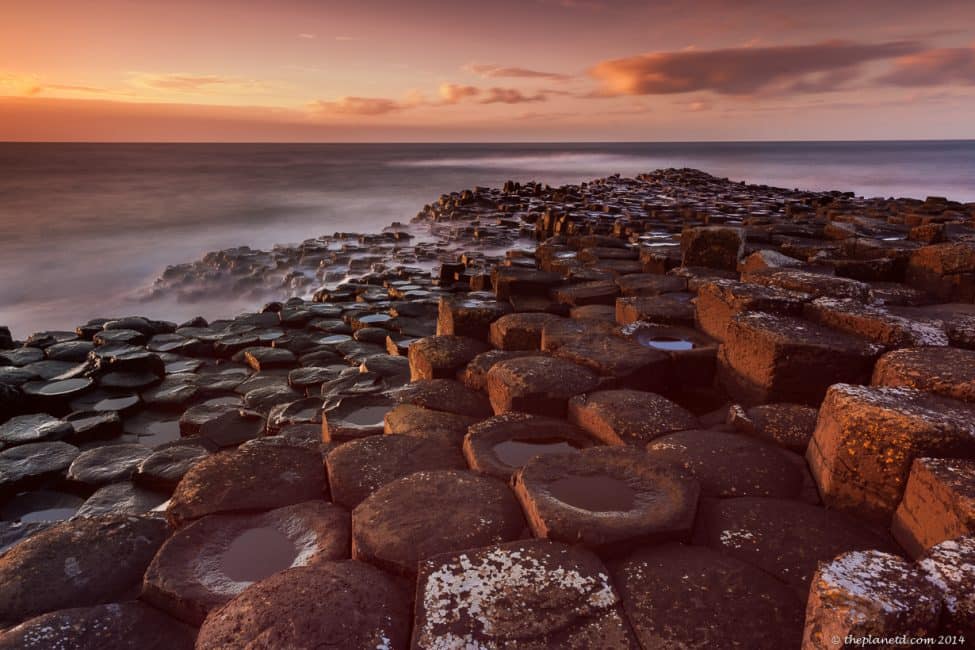 Science tells us that the Giant’s Causeway on the coast of Northern Ireland was formed by a volcanic eruption 60 million years ago. But there is a legend of the Giant’s Causeway that I find far more intriguing. Because when you see it with your own eyes, it’s hard to believe that it was made by Mother Nature.

A UNESCO World Heritage Site, the Giant’s Causeway is Northern Ireland’s top tourist attraction. Located in a beautiful setting in Country Antrim along the Causeway Coast, it is the most unique place we’ve ever visited!

The Giant’s Causeway – The Myths and Legends of Northern Ireland

Science tells us that a volcanic eruption formed the basalt pillars of the causeway 60 million years ago. When the flowing lava crashed against the coast, the water cooled it creating symmetrical hexagonal pillars in stacked upon one another.

When we first laid eyes on the Giant’s Causeway, we found the science nearly impossible to believe. It’s too perfect.

It looks more like a man-made interlocking brick walkway than the remnants of a volcanic eruption. Each hexagonal tube is stacked meticulously in the form of a staircase. Lava can’t flow that perfectly can it?

It is said that there are more than 40 thousand basalt columns created by the flowing lava crashing against the waves of the ocean that cooled the volcanic stones. That may be the scientific explanation, but we tend to lean towards the legend of the Giant’s Causeway and a Giant named Finn McCool.

Instead of trusting the science and listening to the experts, we chose to believe in the legend of the giant Finn McCool (aka Fionn Mac Cumhaill) and the Giant’s Causeway. (Hey, it was either that or aliens)

Standing on the Giant’s Causeway and examining the pillars made it easy to believe that it was built by giants. They look like they had to have been carefully placed there by someone larger than life.

The Story of Finn McCool and Scottish Giant Bennandoner

For generations, the story of a Finn McCool has been told in Ireland. People believed that the causeway was built by giants. When looking at it, it’s easy to see why.

I could totally picture a family of giants creating an interlocking brick walkway to create a causeway across the sea to connect Northern Ireland and Scotland. (I wonder if they bickered as much as Dave and I when we placed our patio stones at the front of our house?

Legend says that rivals Fionn Mac Cumhaill of County Antrim in Ireland, and the Scottish Giant Bennandoner were constantly bickering from afar. One day Finn McCool decided to build a bridge to cross the sea and challenge Bennandoner to a fight.

He ran across the causeway from Ireland to Scotland to sneak up on Bennadoner, but when he got a closer at the giant, he discovered that he was larger than he imagined. McCool quickly turned around and ran back to Antrim. Bennadoner noticed McCool and followed him home.

Being a smart man, the Irish giant Finn McCool ran to his wife for help. (As we women know, most husbands do) He told her that he challenged by the giant Bennadoner to a fight but the giant was much bigger than he imagined. What could he do now?

She made a plan quickly dressed him in a bonnet and shawl disguising him as a baby and tossed him in a crib. When Bennadoner saw the giant baby, he realized that a full-grown giant would be too big to fight, so he hightailed it back to Scotland destroying the causeway on his way home. The bridge across the sea was gone, but remnants still remain.

Watch the video of the Myth of Finn McCool at the Giant’s Causeway visitor’s centre.

When walking along the 40,000 or so pillars that are left of the Giant’s Causeway it is easy to envision these stone pillars as steps leading out over the sea. It’s so perfectly formed and beautifully crafted it makes it hard not to believe in the legend. We could easily imagine a bridge across the sea.

When we hear that there are similar basalt pillars at Fingal’s Cave on the Scottish Isle of Staffa it reinforces the belief that it could be true. Just imagine a giant causeway linking the two islands to each other. Wouldn’t it be beautiful? And isn’t it fun to believe in giants, even if it’s just for a few minutes?

The best way to see the Giant’s Causeway is on a road trip through the Causeway Coast. Having a car allowed us the freedom to see all the top sites of Northern Ireland without the crowds.

Tour buses arrive at about 10 am and continue all day long.

We stayed at the Giant’s Causeway Hotel and visited the Giant’s causeway at sunrise and sunset. There was barely another soul in sight. By staying at the hotel, we could walk down to the causeway ourselves and take in the views. For sunset, we shared the basalt columns with only two other people.

Be sure to visit the Giant’s Causeway visitor’s centre to learn more about your visit.

Do you believe in legends or are you science all the way?

For more information on travel to Ireland visit GoToIrelandCA for accommodation at the Giant’s Causeway visit the Causeway Hotel.

See The Best Road Trips in the World