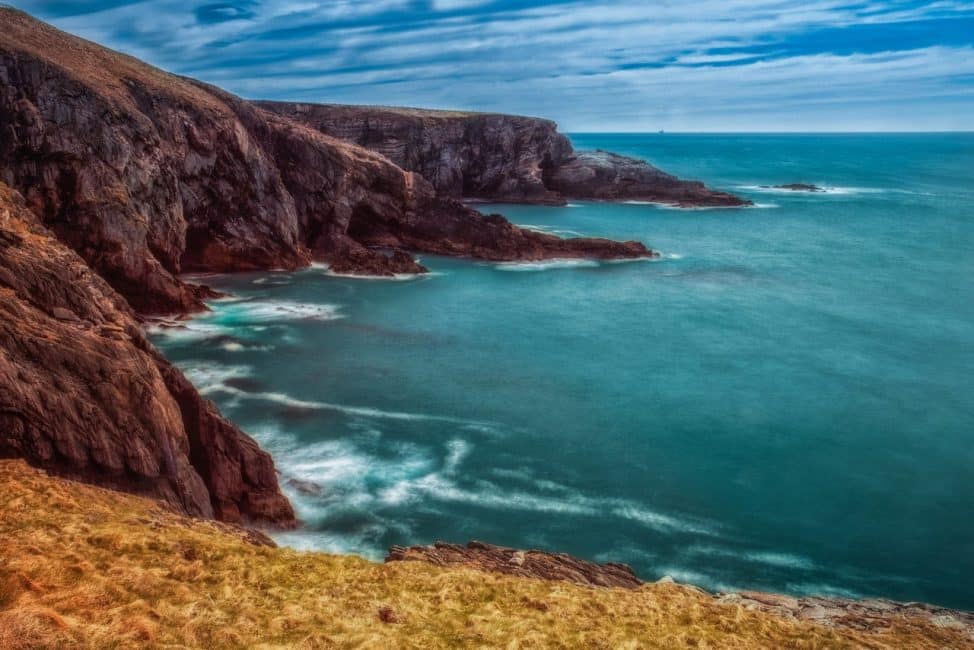 The Wild Atlantic Way of Ireland is the longest defined coastal driving route on earth. It's easy to navigate and understand, but there are a few things you should know before you go. 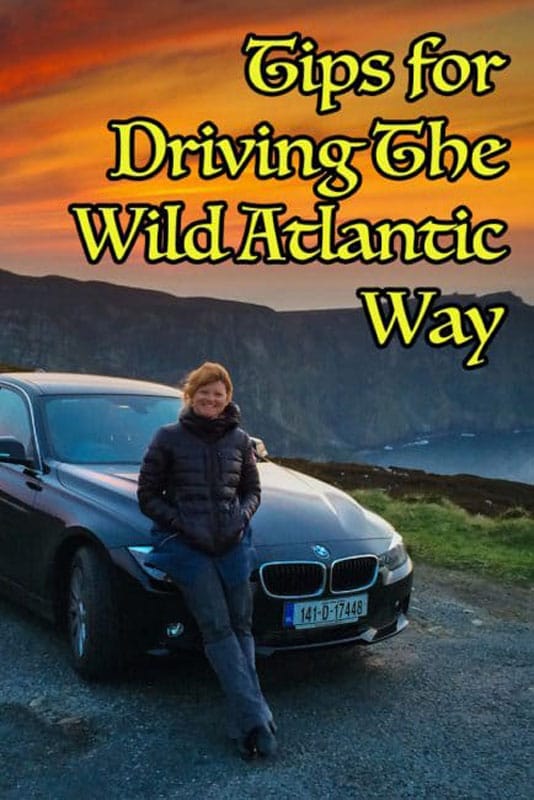 We started in Dublin where you will most certainly want to spend a few days. Check out The Best Things to do in Dublin. We'll let you read that at another time and get down to business now to talk about the Wild Atlantic Way.

The Ireland tourism website has the route outlines from North to South, but we chose to drive it starting in the south of County Cork. Why drive South to North? For one, you will be on the ocean side of the road.

Remember, driving in Ireland is on the left hand side of the road, so if you drive north, the Atlantic Ocean will be on your left allowing you to pull of easier to take photographs and take in the view. You won't ever have to worry about crossing traffic. 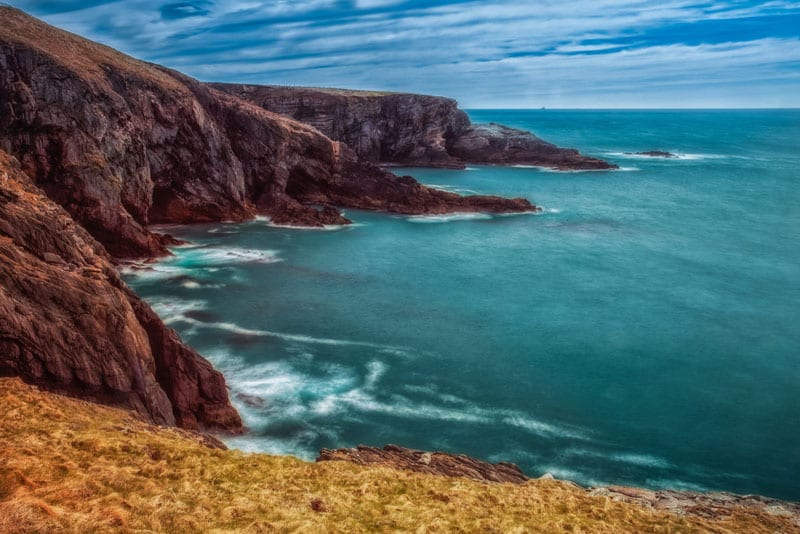 The View from Mizen Head in Co. Cork, Ireland

It's difficult to get lost on Ireland's Wild Atlantic Way, roads are marked with the WAW logo. If Dave and I ever took a wrong turn, we'd just look for the signs, if we didn't see one for a few km we knew we were off the WAW and turned around until we saw the sign again. It's brilliant! 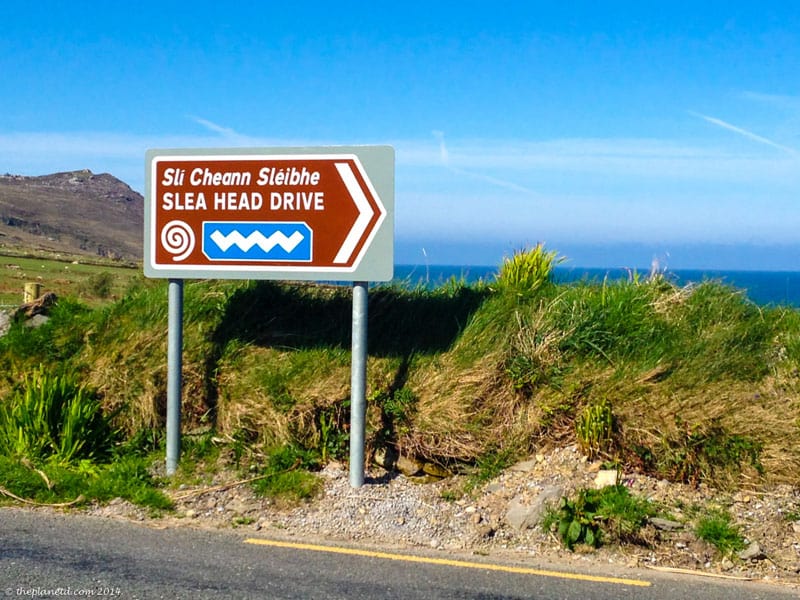 Just follow the signs on the Wild Atlantic Way.

Travel Tips: Where to Stay on the Wild Atlantic Way

#2 Give The Wild Atlantic Way Time

Most people think of Ireland as being a small country, but remember, the Wild Atlantic Way is 2750 km in length. You can't assume that you will be able to see everything in a week or two. We found two weeks to be quite rushed and feel that three weeks to a month would have been the perfect length to explore all of it.

If you don't have that long, choose either the South or North portion to explore. Don't try to rush to fit it all in. 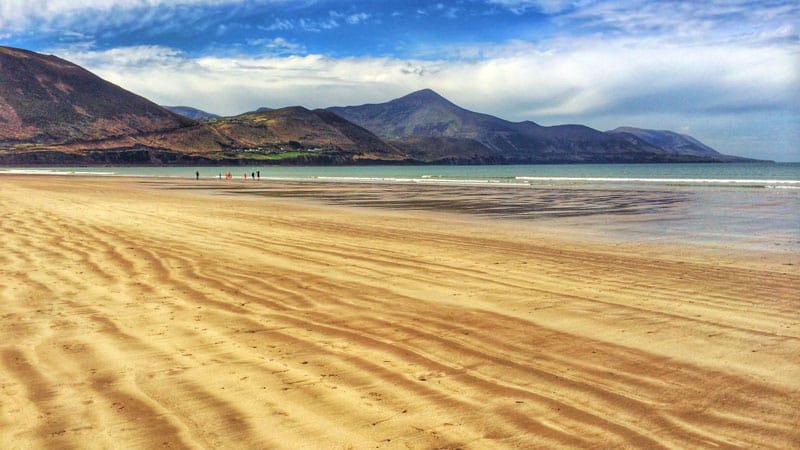 We found that we could have concentrated on just one or two counties of the Wild Atlantic Way and still be quite content. There are spectacular lookouts all along the routes and often times we wished that we had more time to explore one place rather than moving on the next day.

#3 All Two to Three Nights in Each Location

We suggest giving yourself 2-3 nights in each location and either exploring less of the WAW or taking longer than the 2-weeks that we had. 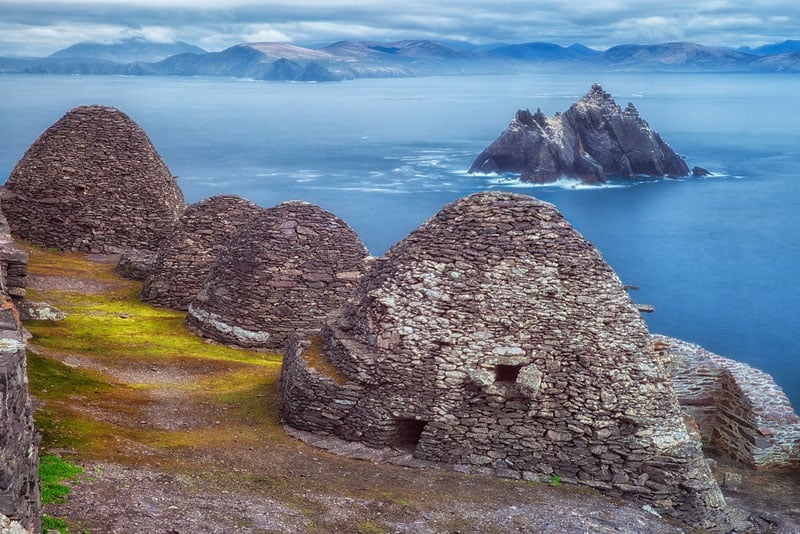 One of the must see places on the Wild Atlantic Way is Skellig Michael, read all about it here!

Distances may seem short on the map, but you will find that you are in your car a lot. In Canada and the US, 100km takes one hour to drive. (Less than an hour if you are like most people and set the speedometer at 118 kph)

While most of the time the speed limits posted on the Wild Atlantic Way are 100km, you are driving on narrow and winding roads.

We found it nearly impossible to keep our speed up due to sharp curves, giving the right of way to oncoming traffic, following tractors, cyclists and even stopping for cattle and sheep crossing. You will need a few hours each day to get to your destination. 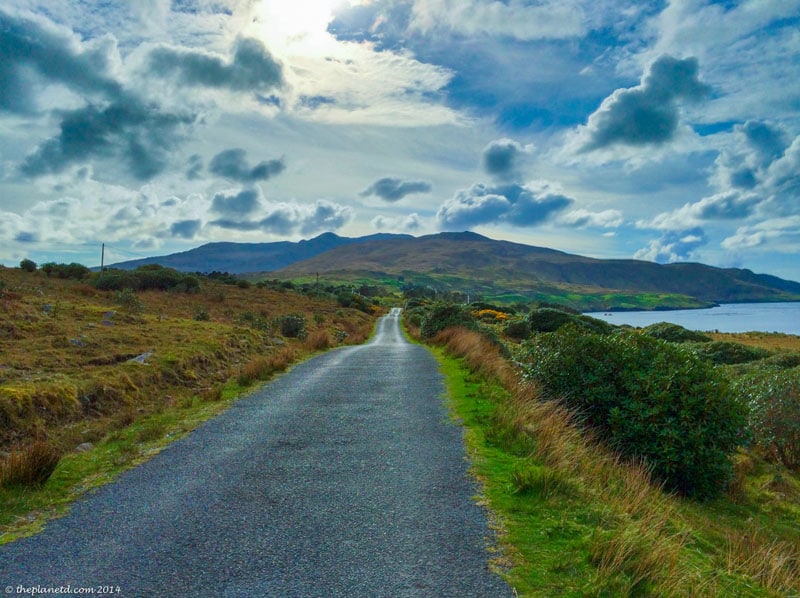 Remember, the roads are narrow and curved. I think this is the straightest road in the country.

As we said, roads are narrow, so don't rent a large 4X4 truck. Rent a medium sized sedan for comfort. Cars felt a bit narrower and smaller in Ireland, so a medium size automobile should do well. If you can drive stick, rent a car with a manual transmission. 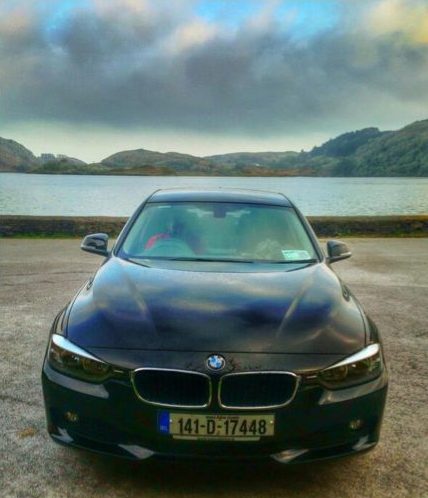 Because most people from North America prefer automatic, Dave and I received and upgrade to a manual BMW. Manual transmissions are cheaper to rent too.  Also, book yourself a diesel – they go longer and diesel is cheaper  by a few cents a litre in Ireland. 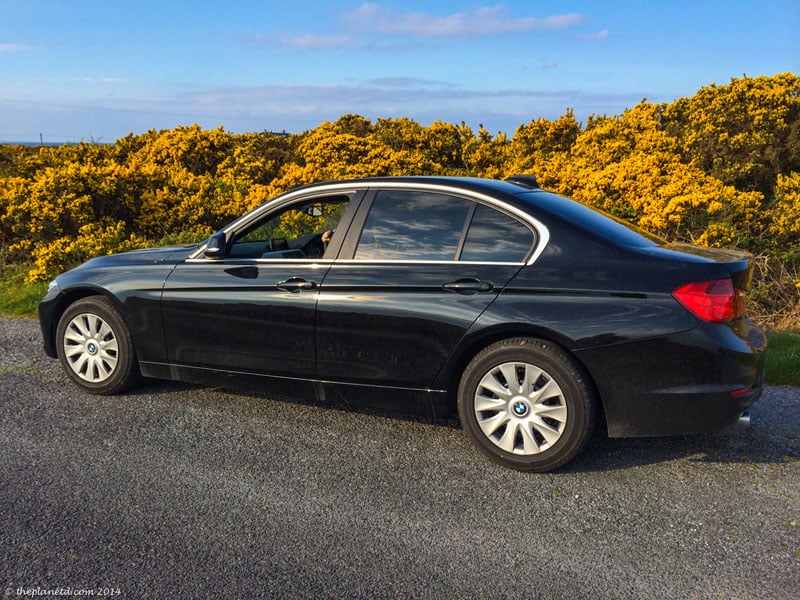 A mid-sized rental car is perfect when driving the Wild Atlantic Way.

There are several different types of accommodation along the Wild Atlantic Way ranging from BnB's to farm houses, hotels and luxury resorts. You can even stay in castles. Most places offer breakfast included in your stay.

It's a good idea to plan your route and book your accommodation in advance, however, we were there in April and most places had a lot of vacancies.

The B&B options are amazing like this one at the Dolphin Guest House in Clifden.

Often times we were the only people staying there, so if you are more of a go with the flow type of person, you may be able to take a chance and keep an eye out for accommodation on the road. We saw rates as low as €20 per person and stayed in places with prices as high as €500 per night.

The Wild Atlantic Way food choices can range from budget to five star. It depends on what you want to spend. Many times we'd buy lunch in a gas station and spend less than €10 on our meals. 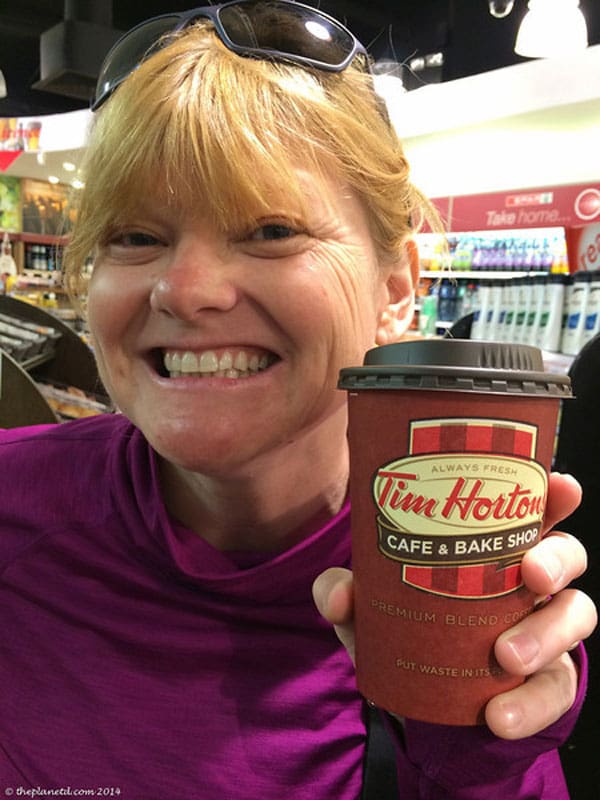 Pubs are quite reasonable to eat at and there are supermarkets in towns to pack picnic lunches as well as food carts all over the country.

Tim Hortons has infiltrated Ireland, so you can get coffee and donuts on the road as well. We found gas stations best for take away coffee. If you want upscale dining, the hotel restaurants were our choice for a night out. People in Ireland are always open to giving recommendations. 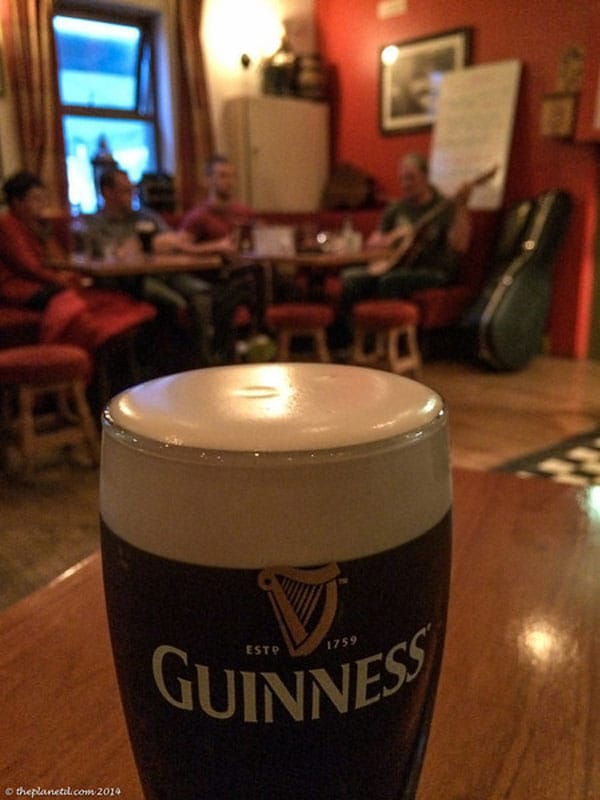 We loved the pub culture in Ireland.

But for us it was the Pubs that offered the perfect combination of something hearty to eat and the true Irish culture. You don't want to miss that.

#7 Must See Sites on the Wild Atlantic Way

Our best advice is to decide what you like and plan your trip around that.

Do you like active vacations? Scenic vacations? Photography? All along the coast there are amazing scenic views and activities to suit everyone's needs. 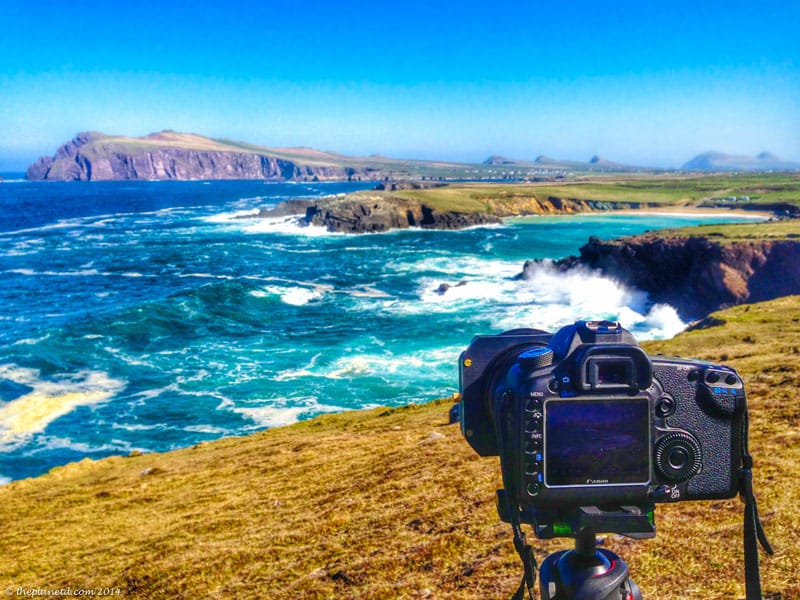 The views are magnificent along the Wild Atlantic Way.

Ireland is a separate country from Northern Ireland although they are the same Island. The Wild Atlantic Way Doesn't cross into Northern Ireland.
Currency: Euro
Distance: kilometres
If you cross into Northern Ireland there is no border, but currency changes from Euro to Pound and speed limits are in miles. (we forgot about the miles and quite a while thought 30km per hour was awfully slow until we realized that it was 30miles per hour. Haha)
Electricity: 230v 50hz it's the same three pronged formation that is used in the UK
Most hotels and guest houses offer free wifi
Portable wifi can be rented from Tep Wireless

The Best Things to Do in Dublin, Ireland

Offbeat Things to Do on The Wild Atlantic Way of Ireland

Where to Stay on the Wild Atlantic Way

21 of the Very Best Things to Do in Ireland