You never know who you're going to meet in the world. During our tour outside of Quito, Ecuador with Urban Adventures, we expected to have an ordinary day sightseeing. The plan was to see condors, hop over to the equator and take in the view of San Pablo Lake.

During one of our stops as we ate some delicious biscuits with sweet caramel butter, our guide talked about the famous doctor that he met the other day. We nodded our heads politely as we continued to eat. It was a little while later when we stopped for lunch that we understood what he was talking about.

We were standing at reception when a bunch of clowns walked in with big smiles on their faces. “Well, that's just odd” we thought. They said hello, asked us where we were from and went on their merry way. It was when the second batch of clowns came in that I had to ask what they were doing here.

A man replied, “Have you Heard of Patch Adams?” Of course I had, Dave and I have both met Robin Williams while working on Jumanji in Vancouver. He was always such a nice and gracious guy. He'd chat with anyone and always made time for his fans. We have a story of seeing Pulp Fiction with him. He stood in line with us and everything!  We've continued to be fans of his work. 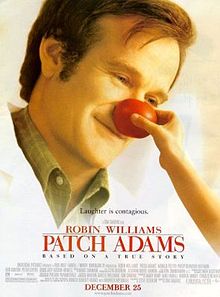 If you don't know who Patch Adams is, he is a U.S doctor who treats his patients through humour and kindness. His philosophy was so well received that a move was made of his life. 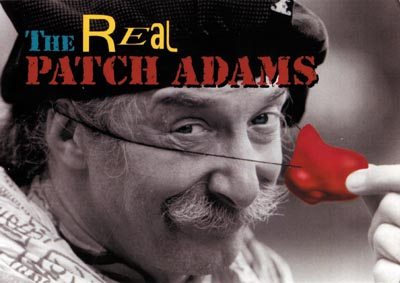 Mr Adams continues his work at the Gesundheit Institute where he lives by his philosophy of health care.

He told us that when he first had his vision of his hospital, he expected it to open in a few years, he instead is breaking ground on the first one next year, as he puts it “40 Years behind schedule, I wasn't discouraged at all”

So What Is He Doing in Quito?

He leads tours where people can volunteer to be a Humanitarian Clown. People can sign up to travel with Adam's around the world to help uplift the spirits of  people suffering in orphanages, schools, psychiatric facilities, nursing homes, and special needs facilities. So far they've reached 60 countries on 6 continents. Today they had just returned from working with handicapped children outside the facility.
If you are looking to do some good in this world while travelling, this is the trip for you. We asked the volunteers how it was going and their response was incredible. Many were doctors and grad students and had nothing but positive and rave reviews about what they were doing. They didn't know who we were as we sat on the balcony eating our delicious Ecuadorian meal. They just knew that they wanted to share their experience and inspire others to take part in something so meaningful. 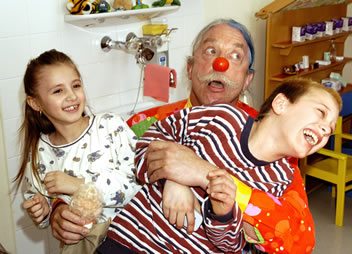 It is said that Patch Adams wasn't happy with the movie and the liberties taken. He was not please with the fact that none of the film's proceeds or any of William's 21-Million Dollar salary went to his free hospital.
While the film inserted the inaccurate statement that “Gesundheit had already built its free hospital hindering their ability to fundraise,” this movie put him on the map. People want to travel with him and be involved with him because they saw the movie or heard about him through the publicity machine of Hollywood.
People follow Mr. Adams on life changing, meaningful tours like his Humanitarian Clown missions. It looked to me that at least 20 clowns had signed up for this tour in Ecuador and while his hospital and vision are still struggling to survive, he continues to inspire and do good around the world.
Way to go Mr. Adams and thank you for being gracious and kind when we talked to you on that beautiful balcony overlooking the lovely valley of the Andes Mountains in Ecuador. We wish you all the success with your cause and your mission.

To find out more about the Gesundheit Institute and the Real Patch Adams visit his website. Follow him on Twitter  and Facebook too! Who knows your next vacation could make a difference in a child's life.

Take your own Urban Adventure in any city around the world. Use our exclusive discount code for a whopping 20% off your own adventure in either your home town or the next city you visit. Coupon Code: PLANETD12

WebsiteFacebook
You are Here: Home » Travel Blog » Would the Real Patch Adams Please Stand Up