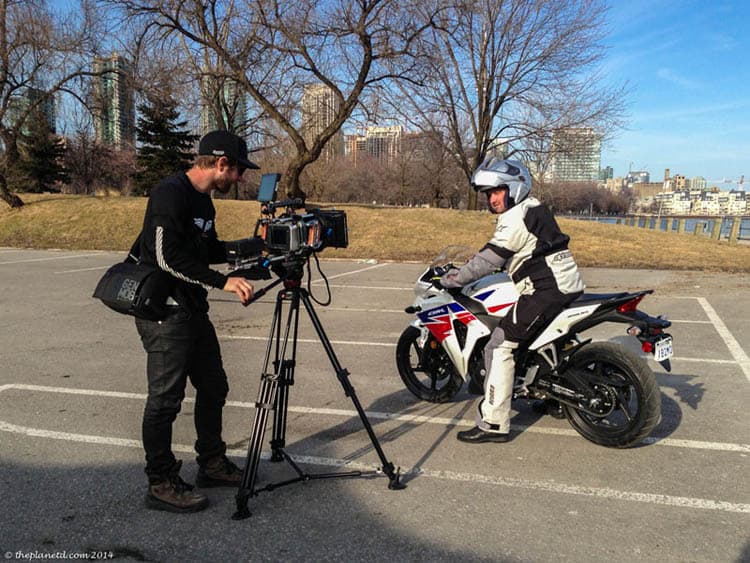 When Dave and I passed our M1 motorcycle licenses we fell in love with traveling on two wheels and spent a summer doing motorcycle road trips all around Ontario. While on a long motorcycle ride around Lake Superior, I went through a list of some of the best motorcycle movies and motorcycle moments on film that we’ve ever seen.

I was definitely fantasizing about being the star of my own motorcycle movie. I had Born to Be Wild cranked in my helmet and visions of Easy Rider living free in the 1960s.

Obviously Easy Rider made our list of the best biker movies, but there are many other great motorcycle movies out there too!

Also read: The Best Road Trips in the World

Our trip around Lake Superior stirs up many memories of this heartwarming movie starring Joshua Jackson of Dawson’s Creek fame.

Diagnosed with cancer, Ben Foster buys a motorcycle and starts a cross Canada tour contemplating the meaning of life.

He stops at many of the monuments we’ve seen during our journey, including the Terry Fox Memorial near Thunder Bay. This is our pick for the best motorcycle movie out there.

Anthony Hopkins plays Kiwi Burt Munro. We love this soft performance by Hopkins chronicling the lifelong dream to take his 1920 Indian motorcycle to the salt flats of America and test the speed and performance of his beloved motorcycle.

It’s an inspiring journey against all odds and it would be number 1 for us if it had taken place in Canada.

It was a close call between One Week and The World’s Fastest Indian for the number 1 spot, but we settled on One Week for the best motorcycle movie because it is pure Canadian.

However, we say rent both!

Watch it on Amazon

While riding my motorcycle I had visions of Uma Thurman stalking Sofie Fatale through the streets of Tokyo.

Her yellow jumpsuit ala Bruce Lee is an iconic scene that definitely deserves a mention in the best motorcycle movie moments.

Check it out on Amazon

This movie was all the rage a decade ago.

I remember everyone at work talking about it. If you have wanderlust, this will make you want to travel more.

This movie made Gael Garcia a star.

Whenever I think of motorcycle moments on film, I can’t help but think of Arnold on a bike.

I think the chase in Terminator 2 where little Edward Furlong tries to outride the new model Terminator on his dirt bike.

Arnold saves the day on his Harley that he stole from a guy at a biker bar. Remember this? “I need your clothes, your boots and your motorcycle” Ah, the good old days of Arnie.

Check out the trailer

This is a movie that not many people have seen, but seriously, it’s a goodie. Kurt Russell stars as a motorcycle daredevil down on his luck after a stint in jail thanks to his bumbling partners.

After taking a fall on a jump at a fair for a few hundred bucks, he gets pulled back into a life of crime and shenanigans ensue. It takes place in Niagara Falls, Canada too, so how cool is that?

Make it your movie night tonight

Mad Max was the first of the Road Warrior movies starring Mel Gibson. A cop and family man takes revenge on a motorcycle gang who murdered his wife, his son and his partner.

There’s a lot of leather, mayhem, violence and oh yeah…motorcycles.

It’s the original motorcycle road tripping movie. From 1969, the summer of love!

Dennis Hopper and Peter Fonda travel through America’s Southwest by motorbike while carrying a cocaine deal.

I’ll never forget being in the New Orleans Cemetery where Hopper created so much mischief, he sparked the no public entry law without a guide that is still in place today!

This ragtag group of suburbanites take off on a cross country trip to get some adventure back in their lives only to burn down a bike gangs hangout.

All kinds of shenanigans ensue.

10. Place Beyond the Pines

Ryan Gosling and Bradly Cooper star in this drama follows Gosling trying to reconnect with this son.

A motorcycle daredevil turned bank robber who uses his motorcycle as the getaway vehicle. This is a crime drama and one of the first places we get to really see Bradly Cooper’s acting chops flourish.

And we just had to add…

Ghost Rider with Nicholas Cage gets a lot of flack and it deserves it, but I think it’s a fun movie night in. Who doesn’t want to see a flaming skeleton ride a motorcycle and punish the evil doers of the world?

Add to that a flaming horse and cowboy and you’ve got yourself a hell of a night indoors. Besides, the entire movie stars a motorcycle, so if you love to ride, you’ll enjoy giving Ghost Rider a shot.

No Motorcycle movie list would be complete without Marlon Brando’s vehicle the Wild One.

It’s a classic, if not dated motorcycle film, but if you love old movies and Marlon Brando, you’ll. enjoy watching his performance and the gang at war with a small town.

Ewan McGregor and Charley Boorman take an epic motorcycle trip around the top of the world.

Dave and I have done both the routes that these two best friends took in both series The Long Way Down (when cycling through Africa) and Long way Round (During the Mongol Rally) so we loved these series resisting many of the places that we had been ourselves.

Who doesn’t love Ewan McGregor and seeing him as an average dude (albeit on a BMW motorcycle) is pretty cool to watch.

Charley Boorman took things even farther when he decided to race to Dakar.

This is an epic race that I really enjoyed watching. There is more at stake in this film, as it is more dangerous and wild than the Long Way Round.

The 16 day race is brutal and Charley had a severe mishap while another of his teammates were stranded on this trip.

Get the Complete DVD series

It is considered the most exciting film ever made about Motorcycle sports. It was nominated for an academy award and reminds me of those old Warren Miller Ski Movies.

Steve McQueen stars alongside motorcycle champions and it is all about the sport of motorcycle racing. Get your adrenaline fix as it answers the question of why do people risk their lives on tracks around the world.

16. Riding Solo at the Top of the World

This is a motorcycle movie and a travel movie. Follow Mumbai native Gaurav Jani as he rides solo from the busy city of Mumbai to the Himalayas of Ladakh.

The cultural experience takes you through India as he interacts with the people he meets along the way as he showcases the landscape, beauty and hardships of India.

It reminds me of Suvivorman as he is a one man production. It is truly amazing what he accomplished.

Other Shows to Watch for Motorcycle Lovers

So that’s our choices for best motorcycle movies and moments out there. What’s yours?