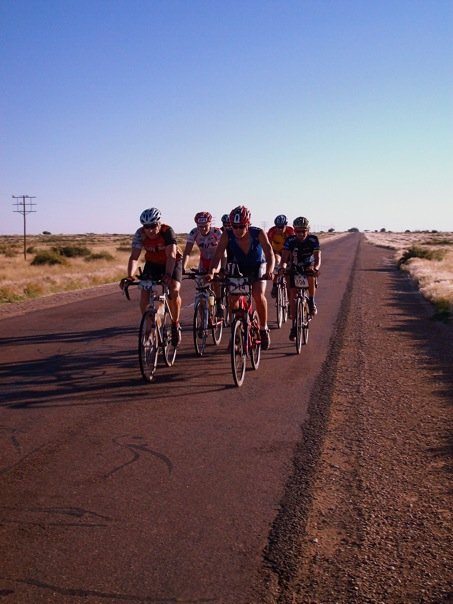 As we speak, we are in Egypt speaking at a travel conference. Nearly 4 years ago to the day, we are back in the country that changed our lives. It was in 2008 that our entire adventure began and ThePlanetD was born when we flew into Egypt for the start of the Tour d’Afrique.

We had no idea what we were getting ourselves into. All we knew was that we had made a New Years Resolution to change our lives and cycling down the continent of Africa seemed like a good start.

The Tour d’Afrique is a 12,000 km cycling race from Cairo to Cape Town. One year after making our New Years resolution toast, we found ourselves in Africa to follow through on that epic promise to ourselves. 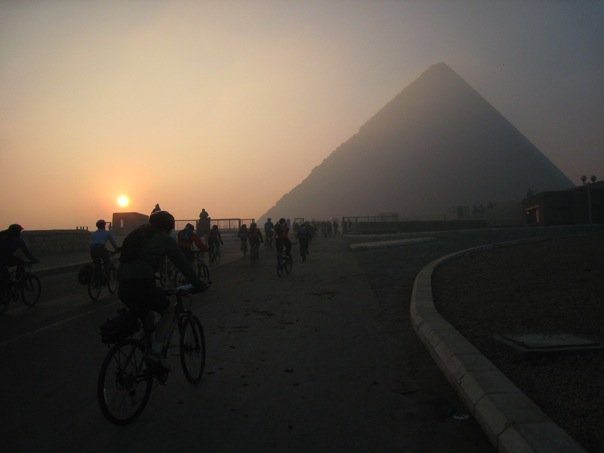 Cycling by the Pyramids of Giza, Egypt

Little did we know that we’d still be on the road 4 years later fulfilling our dream of becoming full time adventurers?

The TDA was one of the most difficult experiences of our lives. We went into this race with high expectations; to win, and to achieve EFI (cycling Every Fabulous Inch) In the end, we ended up accomplishing both. Deb was women’s champion and Dave ended up in the EFI Club. 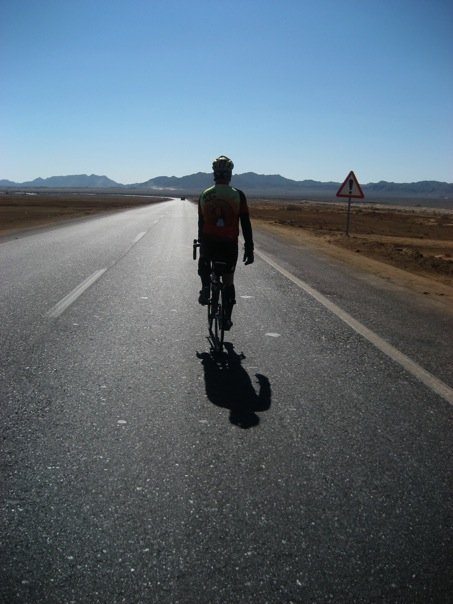 To this Day, Dave still says that cycling Africa was the best experience of his life. Sure it was difficult, but he loved the simplicity of waking up day in day out for 4 months knowing that the only thing on his agenda was to make it to camp waiting somewhere between 120km to 200km later before the sun went down.  We thrived on riding his bike and entering a state of complete meditation while riding through the ever-changing African landscape.

navigating the non-existent roads in Ethiopia

To this day, Deb still says that it was the most difficult and miserable experience of her life. Each day was a struggle as she pushed her body beyond its limits for a solid 4 months. Alienated from the other female riders who didn’t understand her need for achieving success and drive to ride as hard and as fast as she could, she felt emotional and frustrated from beginning to end.

Together as a Couple 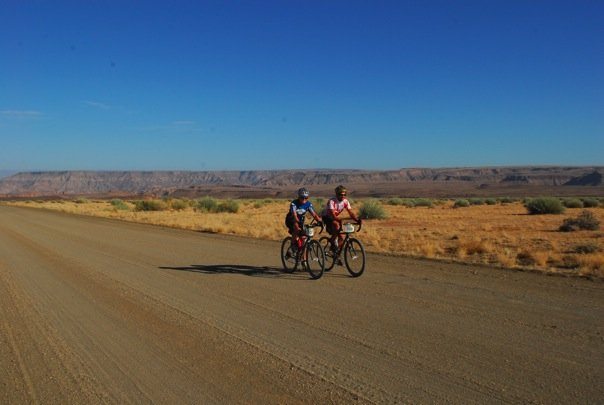 Cycling Together in Harmony by Namibia

Luckily we had each other to rely on and Dave sacrificed much of his total overall race time to help Deb make it to the finish line each day. You see the top 4 spots were clearly locked up. With a category 1 racer, a Canadian Iron Man, Switzerland’s Mountain Bike Champion and The former coach of the Finland National Cycling Team taking part in this year’s race, there was little chance barring an absolute catastrophe that Dave could overtake these career cyclists. Instead he decided to focus on the EFI club. By slowing down his pace a bit to stay with Deb, we could ensure staying healthy and strong giving him better odds of cycling every inch of the continent. He never had a sick day, a bike malfunction, a need to step on the truck or hitch a ride, and he always made it in before sun down.

Many people didn’t and each time we took a ride on the support truck if we were racers, we received a 12-hour penalty added to our total overall times. 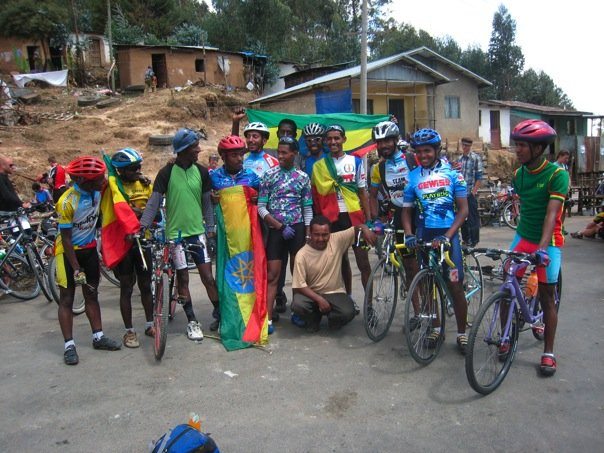 The Ethiopian Racing Team Joins Us for a Leg

The Tour d’Afrique was a stage race. Each morning we all left camp at our leisure. The stronger racers slept in and left later while the other riders left at daybreak to be sure to make it in before sunset. The time it took you to get from one camp to the next was recorded and accumulated each day. The person with the shortest time at the end of Africa won.

The beginning was tough.

We had trained hard for a year, riding up to 400 km per week, taking spinning classes and hot yoga, enrolling in a bicycle mechanics course and working out with weights but nothing could prepare us for the absolute torture of sitting in the saddle for 8 hours a day.

It took 1 month before I could finally get on my bike without having the pain take my breath away. 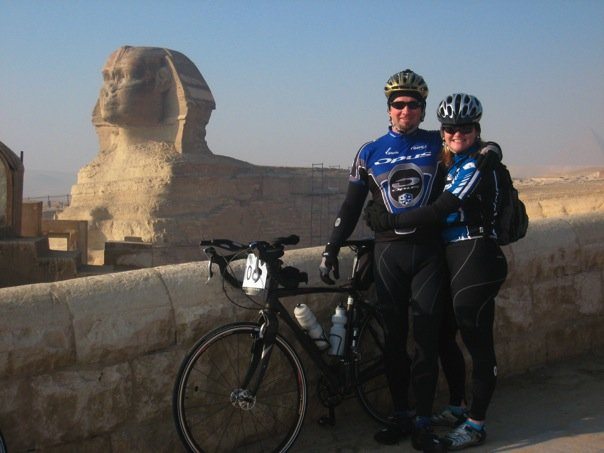 The Start of the Race at the Sphinx in Egypt

The fist day of the Tour d’Afrique began at the Pyramids of Giza and we were feeling confident. We had trained hard and we felt prepared for this moment. Our group of 60 people had the pyramids to ourselves and men were just arriving with their camels and horses to take people on tour. We took our starting photo at the base of the pyramids and then stopped at the Sphinx to admire its splendor. One last glance and we were heading down the continent for the next 120 days.

The day was brisk and we started off slow with a police escort stopping cars and helping to navigate through the dense traffic. We weaved through the city until we finally reached the highway and everyone started to break away.

The pace of the leading cyclists was furious. 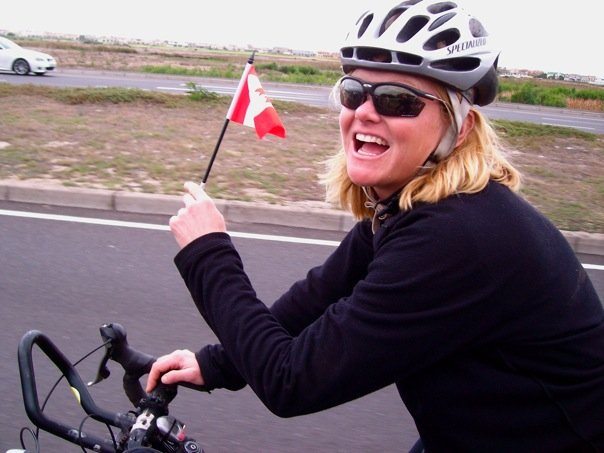 Representing Canada in the Tour d'Afrique

Thinking we were prepared, we held on to the lead group for as long as we could. My lungs heaved and my legs burned and I wondered how I could possibly keep this up.

It didn’t take long before I hit the wall and soon I had fallen far back from the pack. I had about 100 km to go by the time I reached lunch and it was there that I reconnected with Dave and a few other cyclists. It seemed that today was taking its toll on everyone.

Traditionally the first day out of Cairo on the Tour d’Afrique has always had a strong tailwind but during our tour, we had killer head winds. Some people joined forces to form a peloton, but Dave and I were so exhausted from trying to keep up with the racers at the beginning of the day, we couldn’t even try to stay with the middle pack.

So we pushed on alone 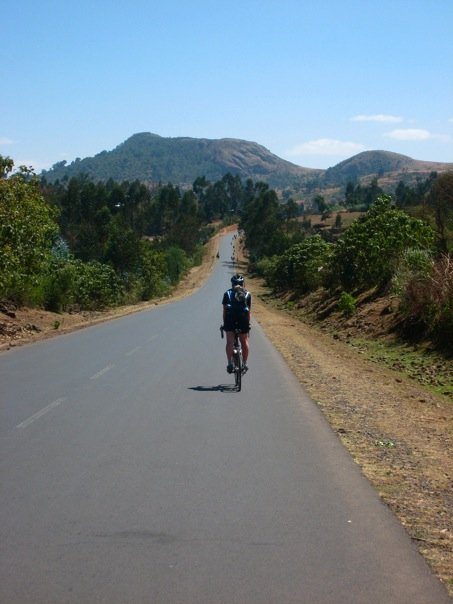 Alone as Usual While Cycling through Africa

We talked each other through and pushed on throughout the next few agonizing hours. We were in dire straights. If we didn’t make it to camp before sunrise we would lose our chances for EFI on the first day! Our hopes would be dashed before they even had the chance to begin.

The sun started to set and we weren’t exactly sure how far we were from our campsite. During this tour we were given a hand drawn map to follow with estimated mileage. We couldn’t be sure of exact calculations. Camp could always fluctuate up to 20 km from where they said it would be. It all depended on how the driver felt and where the support trucks could find a safe and secure place to park. 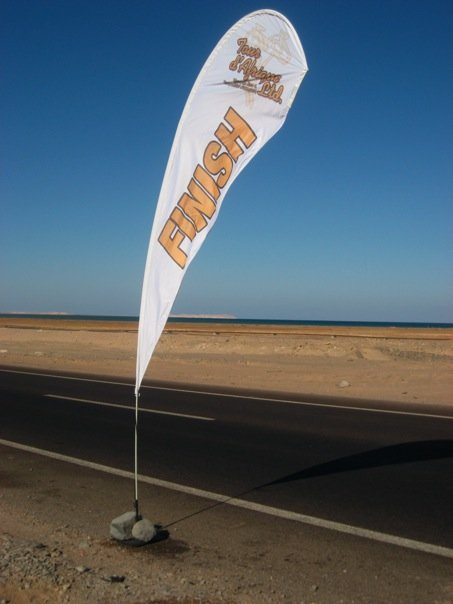 Imagine our elation when we saw the finish line flag just minutes before the sun went down.

We had finished our first day. We were exhausted, scared and overwhelmed with the task at hand, but we had made it through the first day and like so many other situations in Africa and beyond, we could only do it because we had each other. We didn't have any time to celebrate though, we had to set up camp. 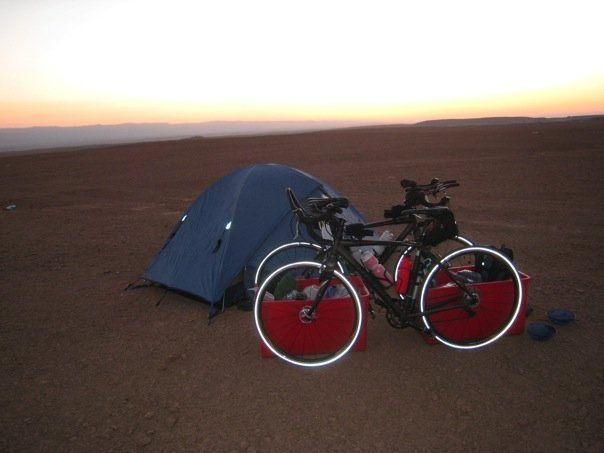 It turned out that 1/3 of the riders lost their EFI that day. Many people had to be picked up throughout the day by our support vehicles and many others decided not to push on after lunch.

We were happy we did, but for the next 5 days leading up to our rest day in Luxor, we suffered greatly.

Our butts never stopped hurting, our legs never stopped burning, we felt the fatigue and aches and pains that come along with sleeping in a cold desert with nothing to keep you safe from the wind but the thin nylon tent and a small sleeping bag and because we had spent 2 weeks seeing the sights in Cairo before hand, we were both suffering from an infectious cough brought on by the pollution of the city.

We started to look like athletes and ride like professionals. We no longer cringed at steep hills or desert sands and a 200 km day wasn’t terrifying.

We grew mentally and physically and while it was tough, we never would be where we are today if we didn’t take that chance and make that toast on New Years eve just a few years ago.