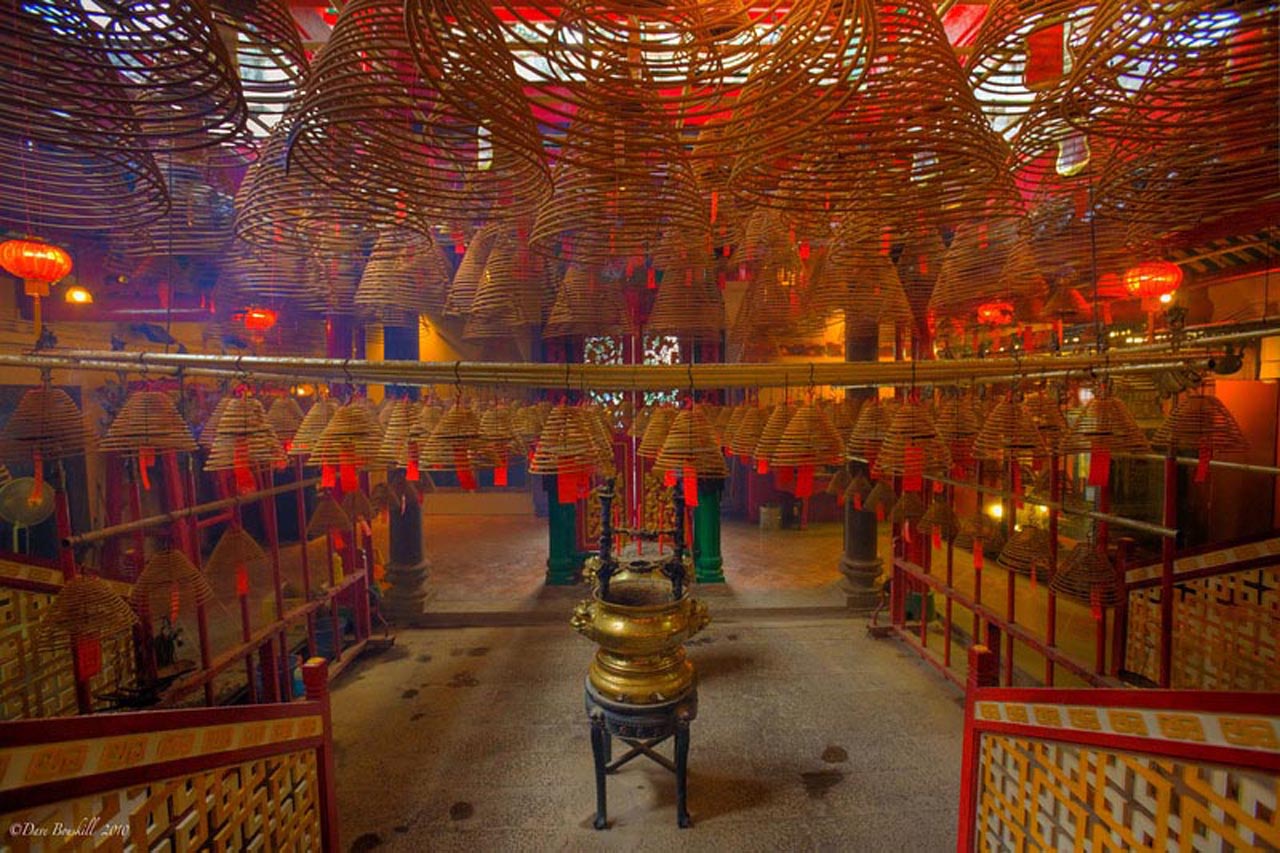 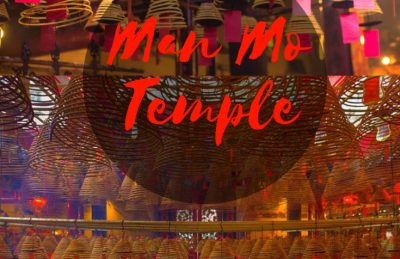 Man Mo Temple is a smoky, atmospheric, magical delight of a temple located in Hong Kong.

Built in 1847 during the Qing Dynasty, it is considered one of the oldest temples in the city and is famous for its saturated hues of gold and red coils of incense.

Man  Mo Temple has been used to worship both the god of literature, Man and the god of war, Mo.

Where is Man Mo

Its lavish interior invites ancient visions of long ago, while the city’s bustling downtown lies just a few minutes away, creating a contrast that is at once captivating and delightfully mysterious.

What is the Man Mo Temple?

The Man Mo Temple, a place where locals and visitors alike gather to worship the god of literature (Man Tai) and the God of war (Mo Tai). It is poised halfway up Victoria Peak on Hollywood Road.

Its prime real estate overlooking the city, just a few minutes walk from the heart of the trendy SOHO district of Hong Kong.

The temple is a smoky, aesthetic wonderland used to this day by locals to pray for academic or literary success.

When visiting the Man Mo Temple, be sure to have your fortune told.

There are fortune tellers around the temple, but a more interesting way is to use the fortune sticks inside the temple.

On a counter, there is a tube of sticks that once you ask a question, you shake the jar until one stick rises to the top.

Take that stick and bring it to the Man Mo Fortune Stick predictions book, and turn the page to the number your stick tells you.

It will then give you a prediction to the answer to your question.

The temple is also used to safely and calmly settle disputes (hence: god of war!). As such, it isn’t uncommon for the odd visitor to witness a meeting among locals calmly discussing a matter!

To this day, Man Mo Temple holds a critical place in society, as it represents the traditional, social and religious practices of the Chinese community.

As a structure, the temple is evidence of exquisite craftsmanship and remains a quintessential example of traditional Chinese architecture.

The temple is comprised of the main building and several adjacent assembly halls.

The main building of the complex is dedicated to Man Tai and Mo Tai, and the other halls are subsequently dedicated to their appropriate gods.

The entire complex a vast and colourful marvel that’s a must-see for anyone visiting Hong Kong.

Man Mo Temple was built in 1847 during the Qing Dynasty by wealthy Chinese merchants.

Since 1908, it’s been managed by one of the city’s hospital groups (Tun Wah Group of Hospitals).

It was given the prestigious title of a “Grade I historic building” in 1993 and, not surprisingly, declared a monument soon after.

Besides being a place of worship, Man Mo Temple has historically been used as a court of sorts—a place where Chinese and the colonialists resolved their conflicts during the time of the concessions.

Its other halls served different purposes, which ranged from worship spaces to general meeting places.

To this day, the temple still honors its historical purpose and continues to be used by locals to settle disputes!

Man and Mo Gods of the Temple

The two gods for whom the temple is dedicated, Man and Mo, can be seen throughout the temple in various depictions.

Man, the god of literature, is often holding a writing brush, while Mo, the god of war, wields a sword.

Historically, the two gods were sought out by Chinese in the event of an examination—it was believed that proper worship would bestow upon them good fortune and academic success.

Man Mo Temple is part of a complex that comprises three adjacent blocks—Man Mo Temple, Lit Shing, and Kung So.

All are open to the public (and free), which makes visiting a breeze

The temple’s outside is unassuming, and its rather plain wooden exterior is extremely misleading considering the wonders that lie inside.

Also outside the temple, a series of plaques can be found—these were often carried around during processions.

Though they are not written in English, one of the plaques requests silence and the other warns menstruating women to keep out of the main hall (don’t worry, ladies, this isn’t in effect today!).

Once inside, prepare for a smoky, mystical atmosphere full of reds and golds; large incense coils hang from the ceiling and burn nonstop.

Seen as offerings to the gods, incense is everywhere at Man Mo Temple, so take precaution if you’re especially sensitive to smoke!

People purchase a coil and write a wish on a red card. As the incense burns, the smoke carries the wishes to the heavens.

Although Man Mo Temple has often been renovated, its original appearance is completely preserved and has therefore not lost an ounce of authenticity.

This is perhaps part of what makes it such a unique destination—it’s untouched by time.

As part of the temple’s centerpiece, two exquisite chairs from the 19th-century can be found, each carved with intricate designs.

They are extremely impressive pieces that were used to carry Man and Mo during festivals.

Things to do near Man Mo Temple

Things to do in Beijing

10 things to do in Shanghai

Top Things to do in China