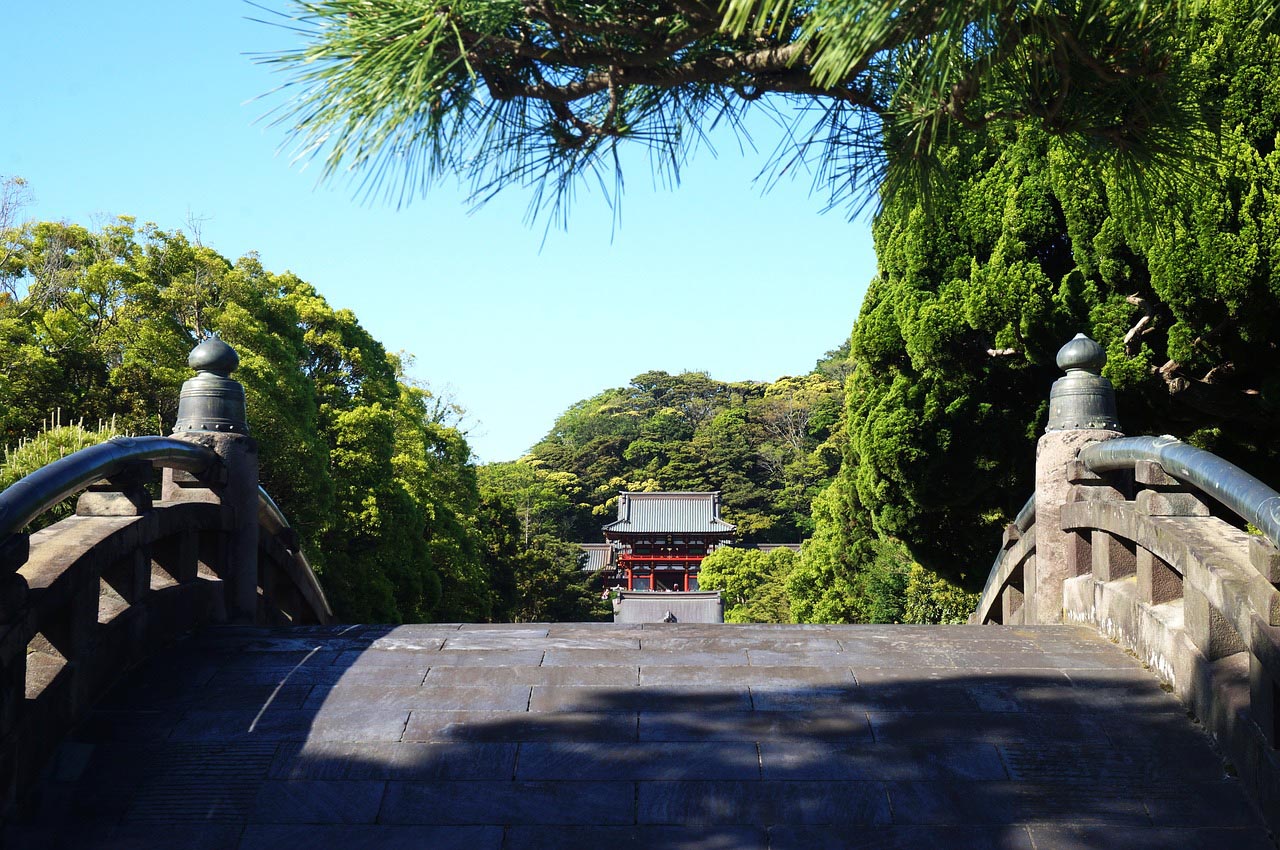 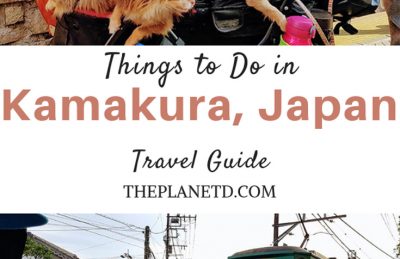 Less than a two hour trip from Tokyo is Kamakura, Japan. A small town so striking, it’s been the setting for dozens of Japanese movies, anime series, and even music videos.

Once the very real battleground of Samurai and Ninja, Tokyoites and savvy tourists flock to the seaside every weekend to escape the fast-paced city life, devour fresh seafood, and visit temples.

I was lucky enough to land myself a volunteer position in a 200-year-old traditional Japanese house nestled in the family-friendly neighborhood of Inamuragaski where I began my explorations.

While working at an Airbnb is hardly something to write home about, my time off was magical enough to inspire a full-length Ghibli film.

One thing’s for sure—if you visit Kamakura, you should finish your days watching the sun disappear behind Mt. Fuji and walk the beach by moonlight to see the black volcanic sand sparkling like it was made of diamond dust.

Things to do in Kamakura

There’s so much to see in Kamakura that you should probably decide where not to go right away. Here’s my personal “if you miss this, you didn’t go” list.

Continue left towards the giant red torii gate, and you will be standing at the entrance of Komachi Street—be prepared to pull out your wallet.

It all starts with a Ghibli shop stuffed high with memorabilia (giant Totoro plushie anyone?) and builds up to chopsticks, jewelry, colored cloth, art, and street food.

Various Kimono rental shops are ready and waiting to dress you up for a traditional day out.

Worried about cultural appropriation, I asked plenty of Japanese friends if foreigners wearing traditional Japanese garb was offensive, and every single person expressed happiness that tourists were taking part in their culture, so don’t hold back!

Be aware that the wooden shoes (called geta) will start to hurt your toes after a couple of hours!

If you’re really lucky, you might spot the elusive chihuahua man. Why he has so many tiny dogs no one will ever know.

This beautiful shrine is about 20 minutes’ walk from the shopping street, and through a couple of massive torii gates.

The stone stairway leading up to the scarlet main shrine is immediately striking enough to warrant the walk.

After climbing back down the steps, head left and do some quality people watching at the best public Japanese lily pond I’ve ever seen.

In autumn and winter, the lilies and turtles disappear, but the koi remain as fat an hungry as ever.

One day, two monks carved two intricate statues of the god of mercy—Kannon—out of a single, gigantic tree trunk.

They threw one statue into the ocean, sending with it prayers to bring good fortune wherever it landed. Years later, the whole wooden Kannon washed up on the shores near Kannonyama mountain.

The Hase-Dera temple was built in honor of the good omen, and the statue of Kannon was enshrined and coated with a dazzling gold leaf.

This is honestly my favorite temple in Japan.

It’s got a spectacular view of Kamakura, one of the most awe-inducing statues I’ve ever seen, a small cave network dedicated to women, thousands of Jizo statues, and over 2500 species of Hydrangea to boot.

It’s always in bloom and always beautiful. If you visit just one temple in Japan, visit this one.

On the tiny island of Enoshima, the shrines far outnumber the residents. At the bottommost level, you’ll find restaurants and street food stalls selling all manner of fresh seafood.

Make sure you try the pressed octopus cracker called ‘tako-senbei,’ which goes “squeeeee” when it’s pressed into shape.

Each level of the island is beautiful in its own right, but the top is truly astounding.

Named the Sea Candle, a structure sits at the highest point of the island, working as a lighthouse for boats, a viewpoint for tourists, and a cell phone tower for everyone.

From the top, you can catch a superb view of Mt. Fuji and limitless views of the ocean and beyond.

If you’ve got time to spare, there is an incredible onsen and spa on the island with both traditional split onsen baths and mixed outdoor hot pools that require a bathing suit.

The indoor onsen includes a carbonated pool, so if you’ve ever had the desire to soak in a fizzy drink, this is your chance.

Fun Fact: If anyone’s a sailing fanatic like me, Enoshima is also the location of the sailing Olympics in 2020.

Although I think Inamuragasaki Park is picturesque every second of every day even when it rains, it truly shines at sunset.

The park is right on the beach and includes a gigantic rocky overhang that gently slopes into dramatic crashing waves. Photographers flock to this rock to catch a shot of Mt. Fuji framed by the setting sun.

Every day I stayed in Kamakura, I would head down to this beach with ice cream, Japanese beer, or green tea in hand and watched the sun sink tragically below the waves.

For Photographers: This is the spot to go for the elusive ‘Diamond Fuji’ where the setting sun touches the peak making it the volcano look like a diamond ring.

Other Cool Things to do in Kamakura

If you don’t get to these it won’t be a train smash, but I strongly recommend checking them out if you are staying for more than one day.

Pop open a sugary Ramune drink and play old games on classic consoles and try your hand at Japanese board games.

The Japanese man who owns this store loves his shop and lives a very interesting yet simple life—it’s worth chatting to him over a game of Super Mario and coaxing out his life story.

The store is quite the hidden gem, but you can get directions from the owner here.

Home to one of the biggest sitting Buddhas in Japan The Great Buddha at Kotoku-in Temple is a must visit in Kamakura.

The Buddhist temple walls and roof blew away during a powerful storm, leaving the bronze Buddha outside to weather the elements ever since.

Pop in to explore the small bamboo forest and a center your mind with a delightful green tea ceremony.

There are plenty of things to do in Kamakura out in nature and besides the beautiful bamboo forest, be sure to visit Kamakura during the cherry blossoms season when the cherry trees are in bloom.

Where you wash your money in a natural spring and hope for it to multiply into riches.

If you’re good at surfing, head towards the beach and rent a board. The local surfers are always happy to share a wave.

Japanese train enthusiasts flock to Kamakura just to snap a pic with the historic Endoen Train.

The first station opened in 1902, well over 100 years ago and the old-school charm still shines strong.

Packed to the brim on weekends, mornings, and evenings, it’s unlikely that you’ll get a seat unless you are first in line at the Kamakura station.

The train is a stately shade of deep green matched with plush seats covered in faded red velvet.

The Endoen hugs the coastline, moving through neighborhoods and running parallel to the main road.

The main stops include Hase, Inamuragasaki, and Enoshima.

The train looks beautiful when it clatters through a pedestrian crossing and many tourists get off the train at a smaller station just to get a good crossing picture— it’s such an iconic sight.

An anime has even featured a crossing in their opening song.

Tip: The ticket prices can add up fast and are rather expensive. I suggest buying a day pass if you are planning to make more than 3 stops (including your return journey).

Having Google Maps installed and connected is a must if you want to plan train routes and discover the more secluded shrines without getting lost.

I highly recommend getting a tourist sim card or resigning yourself to piggybacking off the free (but annoyingly patchy) WiFi at convenience stores like FamilyMart.

Kamakura is a quick and convenient train ride from Tokyo that takes 2 hours at most. You will arrive at Hase Station which is close to many of the top Kamakura tourist attractions.

Instead of scrolling aimlessly through your social media feed, look out the window as the city fades to the countryside and see if you can spot the traditional houses, zen temples and rice paddies in the distance.

I’ll be honest, my first bicycle ride in Kamakura did not go well.

I wobbled like a drunk thanks to the thin road tires and my French buddy laughed at my general inexperience with far too much gusto.

But after a little refresher and a slight fall, I was glad I persisted in this somewhat sweaty mode of transport.

Kamakura has plenty of challenging hills, beautiful panoramas, and quaint streetside shops, but the best cycle is along the coastline opposite the railway line.

Right next to the deep blue ocean, you’ll have views of Mt. Fuji on clear days and the mesmerizing sound of the seaside to accompany your thoughts.

Waves crashing over rocks, seagulls and hawks cawing out in the sky, and the urgent mid-pitched “ding ding ding” of train crossings will provide you will all the energy you need to get from A to B.

Most accommodation in Kamakura will offer rental bicycles to their guests, or you can pick one up at the bicycle shop near Kamakura Station.

When to Visit Kamakura

Kamakura truly shines in summer when festival season is in full swing and the sound of cicadae fills the air.

It’s a great time for swimming and surfing and you simply have to try shaved ice or fruits topped with syrup (called Kakigori in Japanese).

Remember, this is a popular tourist destination, so it will be packed.

I visited in September (early autumn) and found the weather to be just right for lazy beach days.

Autumn is perfect for temples, as all the leaves turn to brilliant shades of red and orange.

Mt. Fuji is visible on a few days during late summer and Autumn, but it becomes clearer in Winter and Spring months when humidity is at its lowest.

My month exploring Kamakura passed in a whimsical haze of happiness.

It’s the perfect compliment to aband an antidote to a stressed mind. If you have any questions, feel free to pop me a message or leave a comment and I’ll get back to you.

The Complete Guide to Nikko – Things to See and Do

10 Things to do in Kyoto

Claire is a travel and tech copywriter travelling the world and indulging in a devilishly fun digital nomad lifestyle. Get in touch with Claire via her website Copy Island, and follow her on Medium. She’s in love with Japan and aspires to visit it as often as her bank account will allow.