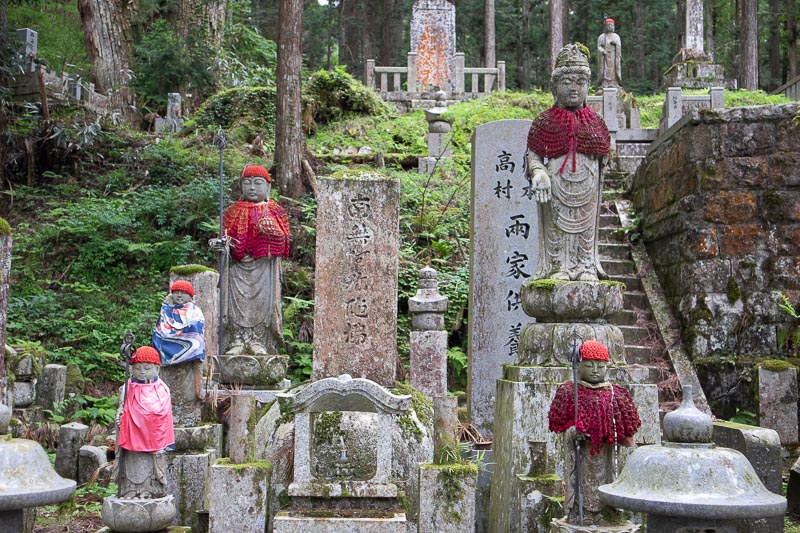 Okunoin Cemetery At Night is a one of a kind experience.

The lights from the stone lanterns begin to flicker on at dusk emitting a ghostly yellow light that casts shadows among the moss-covered tombstones.

Eerie sounds from screeching flying squirrels and night owls add to the otherworldly atmosphere. The Buddhist monk gathers his little tour group and leads us deep into Okunoin Cemetery.

A Visit to Okunoin Cemetery.

The most notable features along the stone paths are little statues with red woven hats and aprons.

These are the Jizo Bosatsu, stone figurines that represent spiritual beings who strive for the enlightenment of all creatures, not just themselves.

They may appear quaint and cute, but they tell a sad story. These small, child-like statues represent the Jizo Bosatsu that protect the souls of children.

The Okunoin Cemetery in Koya-san is Japan’s largest cemetery. It is the final resting place of hundreds of thousands of souls. No one knows the exact quantity because the cemetery is over 1200 years old.

The place is interesting enough during the day. But at night this vast necropolis becomes ghostly yet somehow beautiful. And that is the best time to visit.

The local monks sponsor night tours where they talk about the history of the cemetery itself, the daily lives of the monks and the aspects of the Shingon Buddhism religion they practice.

Koya-san, or Mount Koya was founded in early 800 CE and grew to encompass over 120 temples.

It is regarded as sacred by adherents of Shingon Buddhism because it houses the mausoleum of the religion’s founder, Kobo Daishi.

Check out: The Very Best Things to do in Tokyo, Japan

The mausoleum lies in the center of the cemetery surrounded by tall cedars and thousands of stupas or gravestones.

The interior of the mausoleum is ablaze with thousands of lanterns which, legend has it, have been burning since the spiritual leader began meditating here over 1,000 years ago. Kobo Daishi is believed to still be in a state of deep meditation even today, and food is lovingly and ritually prepared for him daily.

It is important for believers to be close to their religious leader.

Adherents don’t necessarily have to be buried in Okunoin, a physical representation, even a lock of hair, is sufficient to have a meaningful connection to Kobo Daishi and be among the first to welcome the future Buddha upon his return to earth.

The complex is so meaningful to its adherents that it was named a UNESCO World Heritage Site in 2004.

It’s not just size and religious significance that makes Okunoin such a fascinating place. The headstones are what stand out, particularly the Jizo Bosatsu.

The Monuments of  Okunoin Cemetery

In keeping with the tenants of Shingdon Buddhism which values all creatures, there are monuments to insects erected by the pesticide company that exterminated them.

There is a monument dedicated to the enemies of Japan that were killed in wars throughout the ages. Japanese companies maintain monuments for their employees as a corporate benefit.  There are monuments representing spaceships, eating utensils and pyramids.

But the most poignant and touching of them all are the Jizo Bosatu.

It tugs at the heart to imagine parents coming to Okunoin and presenting offerings to these little spirits in return for peaceful passage of their children to the afterlife.

Most of the offerings consist of small coins, candles, coffee cans, incense and sometimes food.

Keeping the Spirits Warm and Happy

To ensure the spirits are warm in the chilly nights, most are given simple woolen hats and bibs or aprons, but others can sport elaborate capes, make-up and lipstick.

The sight of hundreds of these stone figurines clad in children’s clothing in a cemetery setting at dusk is downright gripping.

Admission to Okunoin Cemetery is free. \Night tours can be booked at tourist kiosks around town or online.

The tours begin at the entrance to the cemetery and end at the mausoleum of Kobo Daishi.

You are on your own walking back to the cemetery entrance at night but there is enough light from the stone lanterns to help you find your way.

A visit to Okunoin is a unique experience that will stay with you for a long time.

If you enjoyed this article, why not save it to Pinterest?

10 Things to do in Kyoto

Memoirs of a Male Geisha

Tokyo on a Budget

Talek's personal and professional background have led her to travel to over 110 countries and her work has appeared in several travel publications. Talek lives in New York City with her husband.