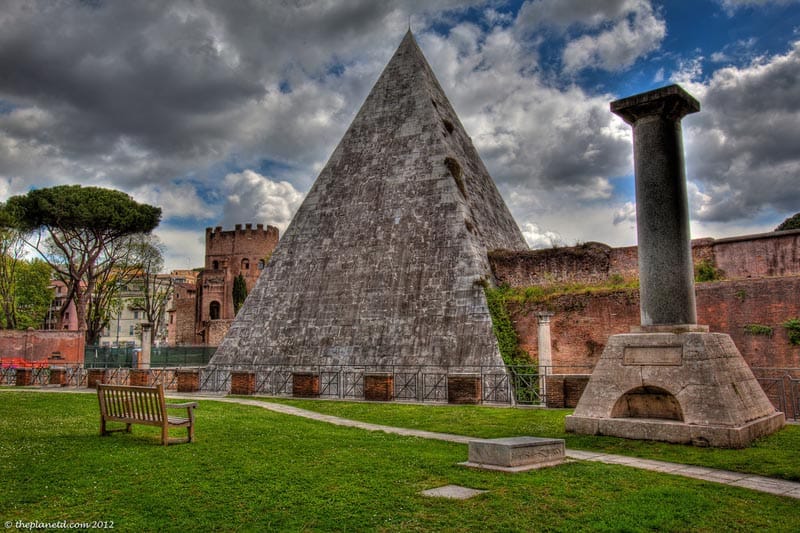 The Protestant Cemetery of Rome also known as The Non-Catholic Cemetery for Foreigners is a lovely escape from the hustle and bustle of the city.

Like the Pere Lachaise Cemetery in Paris, the Protestant Cemetery of Rome is filled with beautiful tombstones and famous residents.

The Non Catholic Cemetery for Foreigners claims to have the highest density of famous and important graves anywhere in the world.

While I would argue that there are many cemeteries that rival Rome’s claim to fame, I cannot deny that it was impressive.

It’s most famous resident of the Protestant Cemetery in Rome is the poet Keats.

His tragic story comes to a bitter end here, at this serene resting place. Suffering from tuberculosis, his doctors told him to go to Rome to take advantage of the Mediterranean climate.

Sadly, he only lasted for 4 months before succumbing to his disease.

Regrettably, Keats was never acknowledged as a great poet during his short life.

Neither the critics nor the public embraced his prose.

It tormented him to be dying at the young age of 25 before he had the chance to be recognized by the world resulting in his final wish to have his name omitted from the gravestone.

Instead, his epitaph read:

What is interesting is he is buried alongside a man who died some 50 years later.

Joseph Severn was with Keats on his deathbed, and while some people believe that he pays tribute to his dear friend by stating on his own epitaph “Devoted friend and deathbed companion of John Keats.“

Other’s state that he was a name dropper, who even in death needed to be associated with fame.

When you look closely at the grave of his own son just behind the Keats and Severn graves, you can draw your own conclusions.

It states: “The infant son of Joseph Severn…accidentally killed in 1837. The poet Wordsworth was present at his baptism.”

He seems like a bit of a name dropper to me.

After all, Keats didn’t want his name written on his tombstone, we wanted to float away into obscurity and here his friend Joseph Severn buried himself right beside Keats and put his name on his own tomb!

Keats isn’t the only famous poet in Rome’s Protestant Cemetery.

The poet Shelley is also buried among these grounds.

Percy Bysshe Shelley (Husband of Mary Shelley of Frankenstein fame) wasn’t suffering from a disease but still died at the young age of 29.

A man living life on the edge, he sailed out to sea, even after everyone warned him of a coming storm.

“Nothing of him that doth fade, But doth suffer a sea-change  Into something rich and strange.”

Ancient Tombs in the Protestant Cemetery

One of the most striking tombs in the cemetery dates back to 12 BC. At 36 metres high, it is definitely an unexpected site.

Caius Cestius, a magistrate of ancient Rome had the tomb built for himself when everything Egyptian was fashionable in Rome.

Our guide Kenny told us that Cestius was against slavery – and yet he used slaves for the 330 days it took to build his tomb.

He also said that after Cestius’ death, it was discovered that he wasn’t as rich as he appeared to be and the estate didn’t have the money to cover the construction of the pyramid.

Instead of placing his body within the tomb, they threw it into the Tiber River.

There are many famous and important tombs in the cemetery and it is a wonderful stroll through Rome’s colourful past, but it is also a beautiful escape from the chaos of Rome.

This little oasis in the Testaccio part of town is not to be missed.

Information on the Protestant Cemetery Rome

We Book City Tours Through Get Your Guide – A Good Tour Company offering last minute tours and easy cancellation.

For More on our tour with Kenny visit Rome Food Tour, Our First Culinary Journey

To book with Kenny, Visit his website at Eating Italy Food Tours, voted #4 in best Tours in Rome on Trip Advisor.