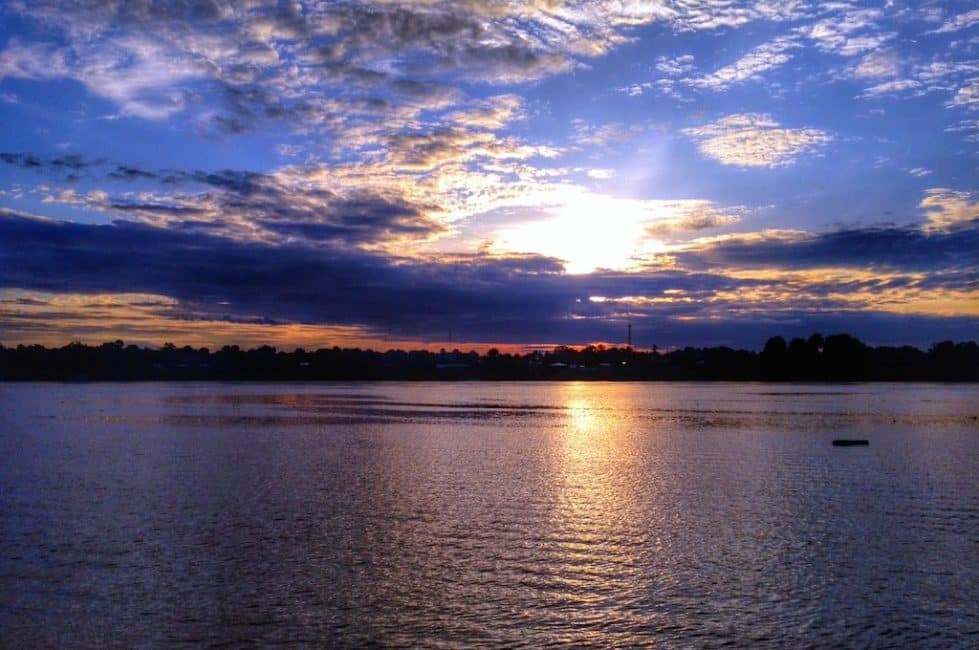 We were four days into our cruise with International Expeditions and we were deep in the Amazon rainforest of Peru and then it happened.

Airlifted from the Amazon

We had been floating farther and farther into the jungle to experience life on the river where we viewed hundreds of birds and primates that lived on its shores.

It was only one more day before the ship was to turn around to slowly make its way back to Iquitos – the jumping off city for expeditions to the Amazon.

The only way in or out was either by plane or several days on a boat. This was as remote as it gets.

Our morning river safari started early and we spent it cruising up and down tributaries in search of wildlife.

After a couple of hours, we stopped for picnic breakfast before taking a leisurely stroll through the jungle.

It was the first jungle hike of our expedition.

At the last minute, Dave decided to grab the flash for his camera.

It was darker in the jungle than expected and if we were to capture pictures of scorpions or tarantulas, it may come in handy. He ran back to the boat while I waited with the group.

Within seconds I heard a shriek.

The screams of agony were intense and I dropped everything to run to the direction of the sound of Dave’s voice.

When I got to the boat, I came upon a contorted body wedged into the nose of it face down.

He couldn’t move. Between the wails, he yelled, “my back my back!” I was terrified.

It was clear that something was seriously wrong and all I could think was that Dave just broke his back.

Luckily a retired nurse named Joyce was a passenger on our expedition and quickly assessed the situation.

Dave was twisted and completely immobile and I wasn’t sure if we should move him. Joyce said there was no way we could leave him in that position, so under her careful guidance, five crew members helped to move Dave onto the padded boat seat.

It was 45 minutes before we left the remote tributary.

During that time we put cold towels on Dave’s back and tried to make him as comfortable as possible as calls were made over the satellite phone to the office.

It was clear that the only thing we could do was have a plane pick Dave up.

It couldn’t have happened at a worse time.

We were nearing the farthest distance from civilization of our voyage and storms were circling above.

Planes weren’t flying out of Iquitos and we were stuck waiting for four hours before salvation finally came.

We called our travel insurance at American Express and they assured us that we were completely covered. So however we needed to get Dave out, make it happen.

Here’s a lesson for everyone. Purchase travel insurance before leaving home.

Dave spent the time laying in agony still strapped to the seat cushions from the boat.

They transferred him from the skiff to the riverboat by carrying him on the cushions through our rooms balcony doors.

It was another four hours before the float plane arrived.

It was 2:30 when the plane touched down, five hours after Dave had fallen on the steel steps and seriously injured his back.

The plane was tiny. I had no idea how we were going to load Dave through the doors.

He couldn’t sit up or roll over.  The had to load him in flat.

Eight men helped to load Dave into the tiny cockpit as I panicked that they would drop him in the river.

All I could think about was how Dave was strapped in with an injured back and if anyone slipped, he’d fall into the murky water never to be seen again.

He was in so much pain and he was tied to a board. he’d never be able to free himself to stay afloat!

He made it in safely as Joyce assured me he’d be ok. I remember her saying “Debra, I have taken care of things this long, I am going to take care of this.” Her reassuring voice put my mind at ease.

The flight to Iquitos was only supposed to be about a half an hour.

But it was less than 10 minutes before the pilot made a sharp turn to land on the river.

The sky was black ahead and there was no way this tiny plane would be able to fly through the storm.

I was terrified that Dave was going to fall out the door!

I remember the pilot closing the door before take off. He reached back over his shoulder and turned the lever with little regard as to whether it was completely locked or not.

I never thought much of it until we banked right in the direction where Dave could have fallen out if the doors happened to open.

The pilot found a sturdy tree to tie up to as we sat out the wind and the rain floating on the Amazon River.

It was hot and Dave was in agony. I couldn’t reach his head to give any comfort. I was sitting in the front seat and he was laying on the floor in the back with an assistant from Iquitos taking care of him.

About a half hour went by and we were finally back in the air. I was feeling optimistic that we would soon be in Iquitos.

We few by some villages below and a half hour later I was sure we’d be coming up to the city.

After a while, the pilot started circling in the sky and I couldn’t figure out what was going on. Was he lost? Did we go off course? But then, he banked right and descended towards the river once again.

This time he drove for a while on the river. Dave yelled, “are we there yet?” I had the task of having to tell Dave not to get his hopes up, we were landing again due to bad weather.

Dave felt every bump as we crashed over logs and waves. I could hear his faint groans over the engine.

My heart broke and I worried that his back was getting worse with every minute that went by.

I wasn’t sure where the pilot was driving until he pulled up to a village and hopped out of the plane. He handed a young boy a rope to hold onto our plane to keep us from floating down the river.

Then, he and the assistant from Iquitos disappeared. As Dave and I waited in the stifling heat, the entire village came out to stare at us.

We weren’t sure what was going on. Were we waiting out another storm? Were they just going to leave us here?

Were we anywhere near Iquitos? Our questions were finally answered.

The pilot came back with a group of strong men from the village to help carry Dave up a muddy bank into the narrow streets. I grabbed our bags and handed them to strangers running after Dave.

They loaded him into a moto taxi. We hopped on and drove through town.

We balanced on narrow bridges, bumped over potholes and made our way through dusty streets.

It was bumpy, it was hot, and Dave was in agony.

I had no idea how far we were from Iquitos, but I knew Dave couldn’t survive a long ride on this vehicle.

It was cramped and it jostled through the streets causing severe pain. He’d never make it!

Luckily it was only about 10 minutes of travel before we came to a small hospital.

A bare-bones ambulance was parked in the parking lot waiting for us.

After a few minutes of watching people scratch their heads and have animated discussions, they opened the doors to the ambulance and loaded Dave in.

I was left alone in the back with him and we sat together in the dark and silence for another hour.

I tried to comfort Dave, but there was very little I could do.

He hadn’t had any food or drink since his fall in the morning and it was now getting late at night.

He was not only in severe pain, but he was also nauseous, dizzy and his head was pounding.

His ordeal lasted over 10 hours and in that time he didn’t eat, drink or receive any painkillers.

He just laid on his side suffering in near silence. It hurt to speak and it hurt to move.

His shoulder wasn’t injured in the fall, but it was causing him more discomfort than his back at this point due to the fact that he had been laying on it for nearly eleven hours!

It was another 7 days before we’d get back to Canada.

The hospital in Iquitos told us that Dave fractured a vertebra in his spine. (Since returning to Canada we’ve learned that he fractured two!)

It was a difficult time that we will tell you all about, but we were grateful for everyone in the community rallying together to help a stranger.

The passengers on our Amazon cruise were patient and gracious as we held up the boat waiting for a plane.

The villagers came quickly to our rescue when we needed help, the hospital staff did their best to comfort Dave and control his pain and the staff of International Expeditions and Explorama were generous with their time and expertise.

We couldn’t have gotten through any of this without them.

It’s a trying time for the two of us, but it could have been worse and we are grateful that more harm wasn’t done.

Traveling to Peru? You will want to browse our Peru Travel Guide