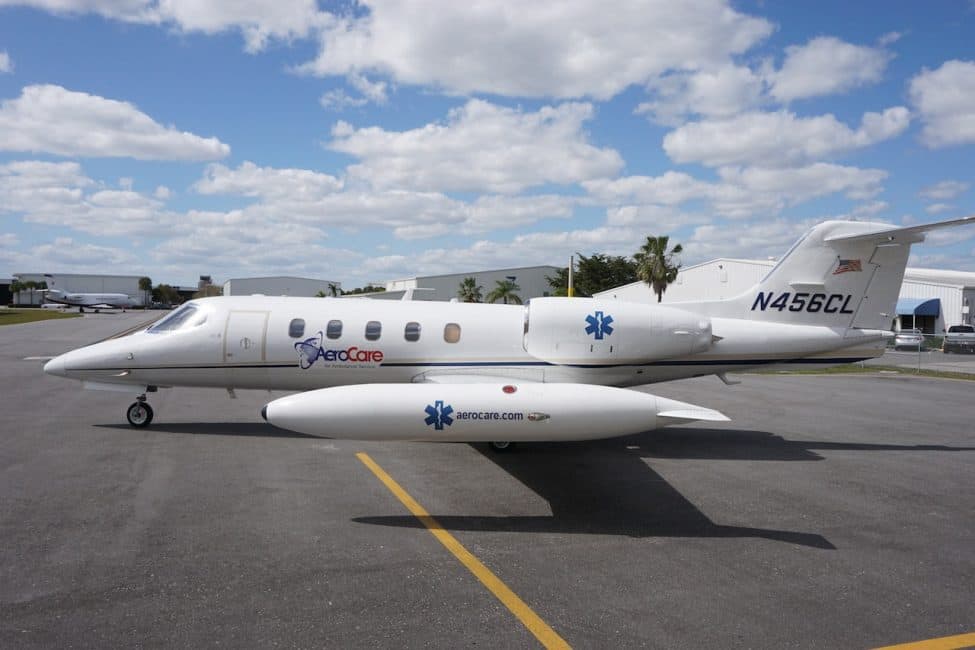 Have you ever wondered what would happen if you had a serious injury abroad? It's happened to us, and we were thankful that we had the foresight to always purchase travel insurance that included air ambulance service evacuation.

Most travellers don’t consider how they would get home if they are injured or ill while traveling in a foreign country. It's something you should think about.

When AeroCare contacted us to share their air ambulance service with you, we felt compelled to revisit our Peruvian Amazon experience.

What is an Air Ambulance Service?

First let me tell you that AeroCare is not a medical insurance provider. They are an air ambulance that you can use should you need medical evacuation.

However, it can be used in conjunction with travel insurance.  It always amazes me when I am traveling how many people don't have medical insurance. When Dave broke his back in the Amazon, we had four hours of waiting out a storm before a float plane could come in and evacuate him from the ship.

During that time, many people asked if we had air ambulance coverage. “Of course” I answered. “Don't you?” Nope.

Nobody seemed to have insurance or a plan. Even families traveling with children didn't have a back up plan. I couldn't believe this. We have always planned for emergencies and I am here to tell you, you should too.

It Won't Happen to Me

People always think accidents won't happen to them. But let me be the first to tell you, it can happen to anyone.

It was a simple slip on a set of stairs during a luxury cruise that we had our biggest travel medical challenge to date. Nothing was supposed to happen on this leisurely trip.

It was an air ambulance service that got us home to Canada where Dave could receive proper care with piece of mind knowing that he was close to home.

It's important to make sure your company has worldwide service, and AeroCare provides that. Their jets have a medical crew That can handle any type of patient.

We've been inside a medevac jet and the moment we got inside and started our flight home, I felt at ease.

Knowing Dave was taken care of by professionals with proper equipment allowed me to relax for the first time in eight days.

I was allowed to fly home with Dave and most of the time AeroCare allows one passenger unless the doctor recommends that nobody is allowed.

What you can expect

Like our medical service, the AeroCare jet is configured like an ICU. There is a nurse and a paramedic to take care of you and they offer bedside to bedside service.

Once you are on the plane, you are in good hands. There will be an ambulance waiting for you when you arrive and the team will stay with you until you arrive at your medical facility.

You can be sure you'll be in good hands because AeroCare is a CAMTS (Commission on Accreditation of Medical Transport Systems) accredited company. Only 65 air ambulance companies world wide have this highest accreditation.

To achieve these standards the CAMTS Board of Directors look at medical, quality assurance, communications, aviation, maintenance and safety.

Audits are performed regularly to guarantee everything is up to date. AeroCare has been CAMTS accredited for the past 14 consecutive years.

All insurance plans are not created equally. As I did my research, I realized that many people have to pay for this service out of pocket. Don't be one of those people.

It's often easy to find out if an air ambulance service is covered by insurance.

The problem is nobody asks. Many people use their credit card insurance blindly, or buy the basic package and then are left high and dry should something happen.

When choosing your travel insurance be sure to ask if it covers air ambulance services. And ask in detail what it involved and what they will cover.

Ours was 100% covered by our travel medical insurance but some plans may make you pay. It can be a little or a lot. Ask those questions beforehand. You don't want to be out of pocket tens of thousands of dollars so plan carefully.

If you have proper insurance, medical evacuation is a breeze if you are seriously injured.

All you need is a doctor in the foreign destination to sign off stating that you must fly by air ambulance.

There was no way Dave could sit up or move during his flight home, so the doctors in Iquitos, Peru stated that he needed to be transported by an air ambulance service flat on his back. That gave the green light to have a plane sent.

If you are unsure about your coverage, give AeroCare a call and ask them for assistance. AeroCare.com 800-823-1911

Their specialists can help you determine what plan or company to go with. Also, if you are faced with an emergency, they can liaise with your insurance company to obtain pre-authorization and be responsible for submitting all documentation. Believe me that takes a lot of stress away for the person traveling.

I spent a lot of time filling out, gathering and emailing forms and paperwork in Peru to secure a flight home.

I was terrified that I had missed something and would be slapped with a hefty bill. Luckily, I got all my papers in order and wasn't faced with a charge, but it was in the back of my head at all times.

We were lucky, our medical plan sent an air ambulance service that covered all the bases. We didn't have to look into a thing.

If we didn't have coverage though, it would have had a $50,000 price tag for the flight alone!

When choosing your Air Ambulance service there are many questions to consider.

AeroCare has a section stating the benefits of choosing them over other providers like their aircraft is certified by the FAA, they have a medical director, the aircraft pressurized, and they do evacuate from international destinations.

I would assume all of these would be a given for all air ambulance services, but it isn't and it's important to choose your Air Ambulance wisely.

If Dave were in better shape after his accident, he may have been able to be flown home on a commercial flight in first class where he could stretch out. He wasn't able to sit up at that point, but if he was, he could have had the option of flying home with a medical escort.

They would be able to monitor and keep an eye on his health and safety. This is another great option.

Every plane is equipped with a satellite phone that can be used for consulting a doctor during the flight, and flights can accommodate one family member to accompany the patient at no extra charge.

AeroCare specializes in transporting patients to and from hospitals, rehabilitation centers, and even private residences.

Each medical transport has a two-person crew that consists of a critical care trained Flight Nurse and either a Flight Paramedic or a Flight Respiratory Therapist.

AeroCare has been in business 22 years. It was started by CEO CEO Joseph Cece and has a perfect safety record.

AeroCare owns and operates their own fleet of medically-configured Learjets. They are not a broker.

The aircraft are equipped with a medical stretcher and base, oxygen, ventilators, multi-channel IV pumps, medications, and more, like a flying-ICU.

Read Next: Air Lifted from the Amazon, Our Worst Travel Fears Realized