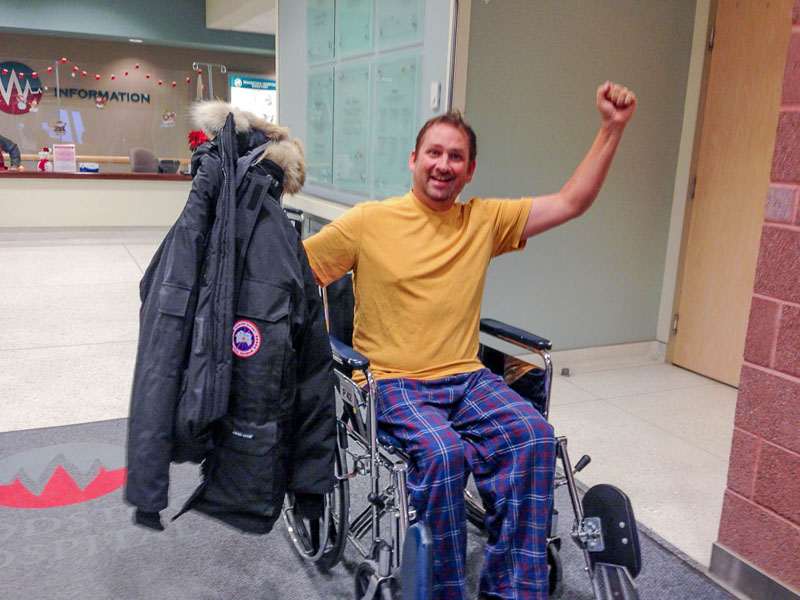 It's amazing how quickly life can turn around. A couple of weeks ago we were stuck in the Amazon thinking that it would be weeks before Dave could even sit up in a chair. Last week when we returned to Canada we had visions of him sitting in the hospital over Christmas.

Home From the Hospital 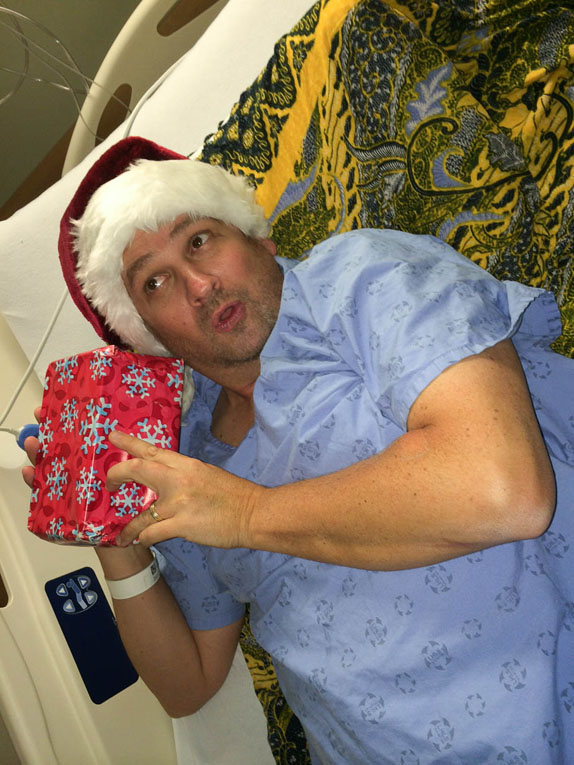 And now, just 18 days after falling on a set of steel steps and breaking two vertebrae in his back, Dave is home from the hospital and ready to begin the healing process.

If this were 20 years ago, Dave would probably be sitting in traction for weeks.

His mom hurt her back in a car accident when Dave was a child and he remembers her hooked up to pulleys and machines to ease the strain on her back. She ended up suffering through pain most of her life.

Today's medicine is a lot different. The minute Dave came to Woodstock, they told him they'd be having him up and walking in no time. 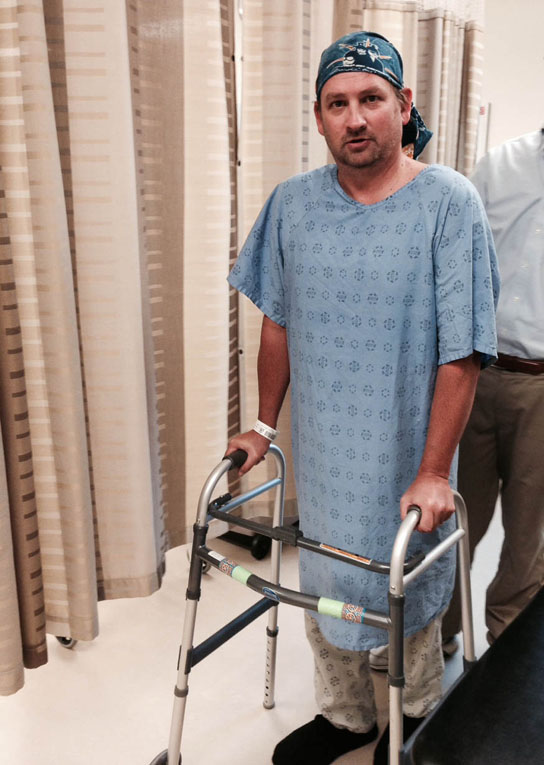 When he first arrived at the Woodstock Hospital via air ambulance from Peru, they told him that once he had pain management and constipation under control, they'd have him up walking with physiotherapy ASAP. 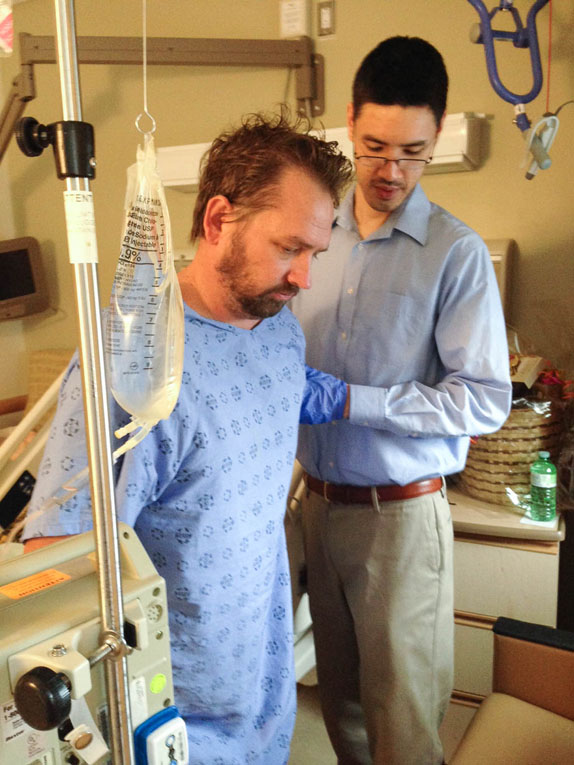 By the looks of him then, I couldn't imagine him being up and about anytime soon, but after a couple horrible nights of pain, discomfort and nightmares from the heavy does of narcotics, he turned a corner. For two nights he vomited blood, had chills and sweats, severe cramps and constipation.

It was scary and terrible. He looked grey and I thought something more was wrong with him that his injured back. It turns out, he's on some strong narcotic drugs and after a couple days of us worrying, the doctor came  in to ease Dave's mind.

Finally, someone explained why Dave was feeling so awful. 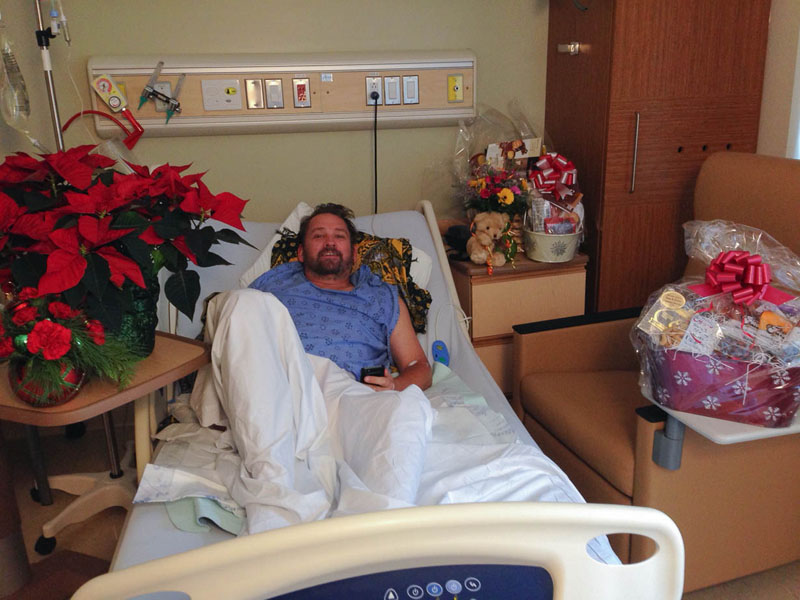 Constipation, sweats, nightmares…they are all a part of being on narcotics. Dave is on some pretty heavy painkillers and he's never had narcotics in his system before. His body is now going, What's going on?

So, once they realized he was having such bad side effects to the drugs, they gave him medication to counter it. Antinauseants, sleeping pills, stool softeners and laxatives were all prescribed to counter the effects of the narcotics. And it worked! Within two days, he was feeling so much better. 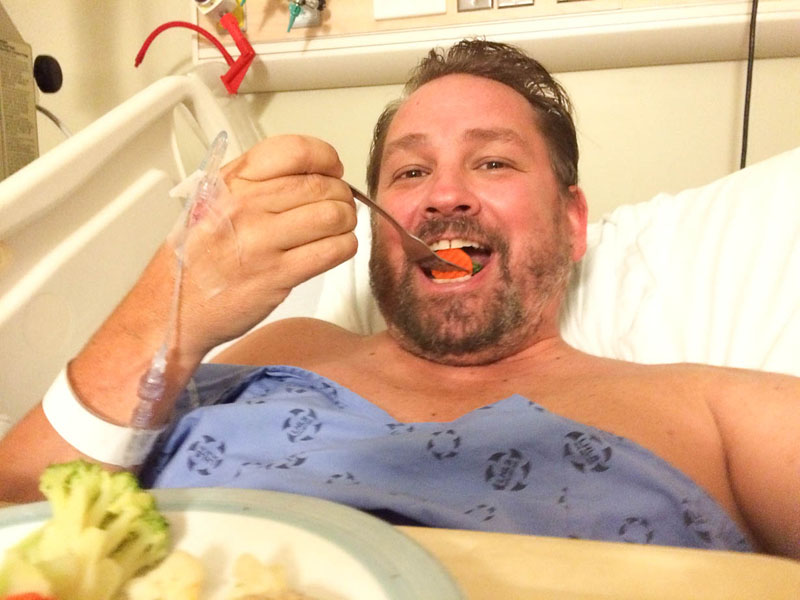 Once the pain was managed, (without the side effects bothering him) he could start the healing process. And heal he did!

Dave has every intention of getting strong fast. His physiotherapist David gave him some core exercises to help build the muscles around his spine and during the first session he had Dave sit up and then stand! 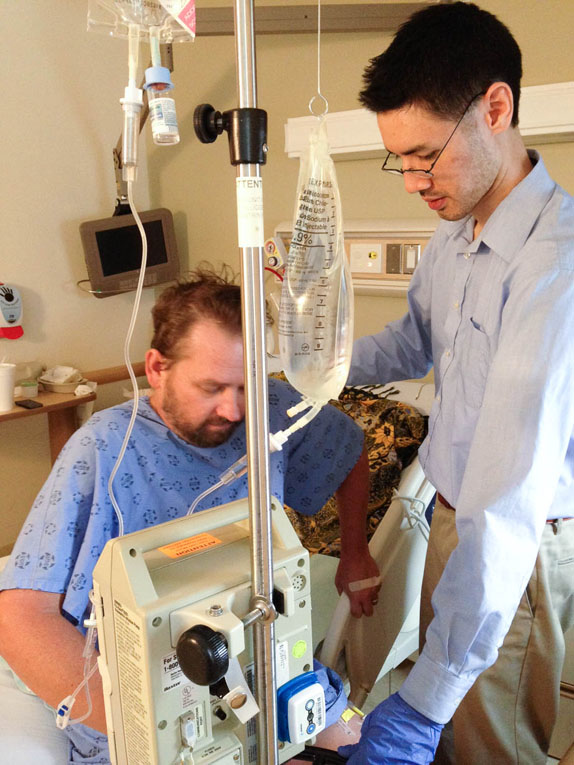 Can you believe it?

Just a few days ago he was lying in agony, now he's standing!

Once he took that first step, his entire outlook changed. He was able to eat for the first time in days, his sweats disappeared and the colour came back into his face. I suddenly had hope that he'd be ok. 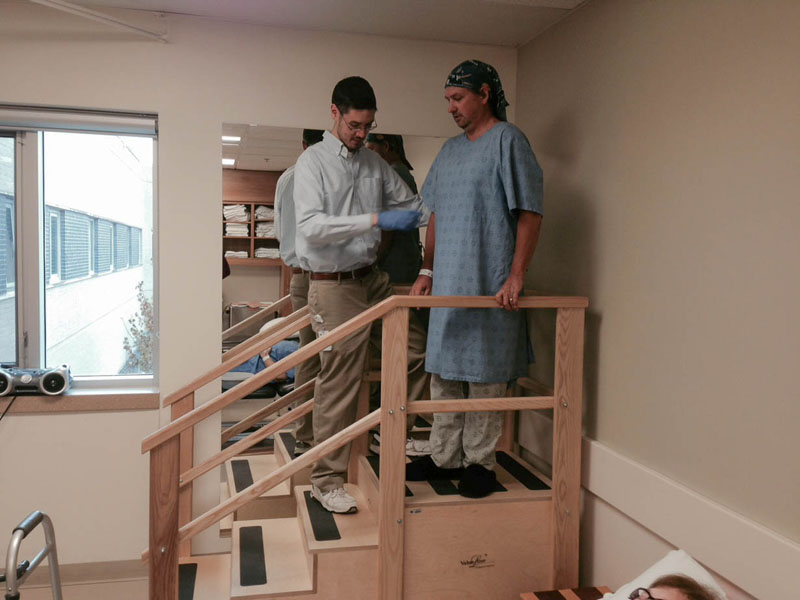 That's not to say that there were not setbacks.

The following day, David took my Dave for a short walk to the front of his hospital bed and back. He then asked Dave if he'd like to sit in the chair for a bit. Dave replied, “Yes…Anything to get out of that damn bed.”

Unfortunately, when everyone left the room, “Dave said to me, I'm not feeling so well. Are my cheeks losing colour?” 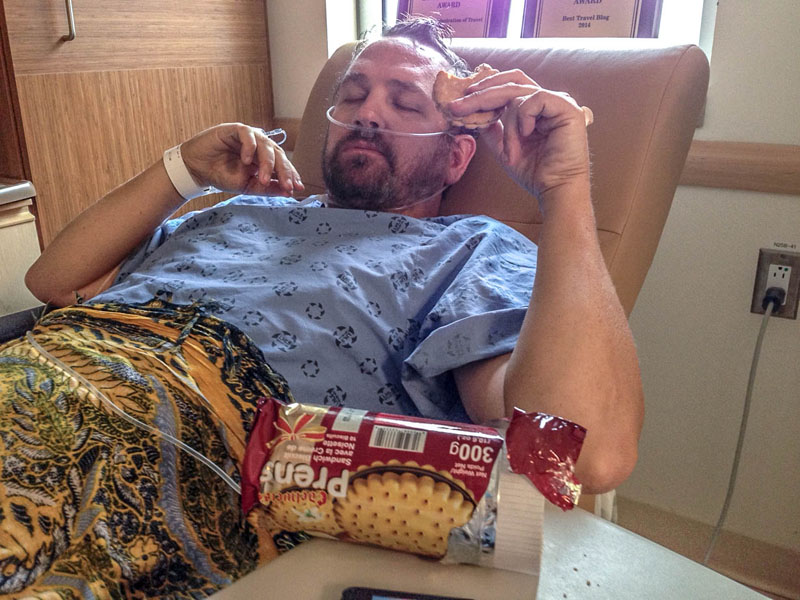 Sure enough, Dave was about to pass out. It's common to lose blood pressure after you've been laying in bed for a couple of weeks and all the excitement was a bit much on his system.

We pressed the call button and I ran about the halls frantically looking for someone to help.

Within minutes, the nurses arrived to give Dave oxygen, check his vitals and keep him awake. I was thanking my lucky stars that I was there for Dave and thanking the nurses for the job they did reviving him. It was scary, but it's part of the process.

Dave continued to have dizziness and lightheadedness for several days after physiotherapy but it has slowly but surely been subsiding.

Dave did so well, they decided that he could go home! It all happened so fast. One morning David said “I think we can skip sending you downstairs for therapy and instead have you continue your recovery at home.”  He was discharged the next day.

If it weren't for my sister in law, Heather, who is a home care nurse with 20 years experience in every department of nursing from Texas to Toronto, I think Dave would have been in hospital a couple more days just because of all the paperwork that needed to be done. But, she talked me through everything and made check list. I then hounded the staff to get everything done. 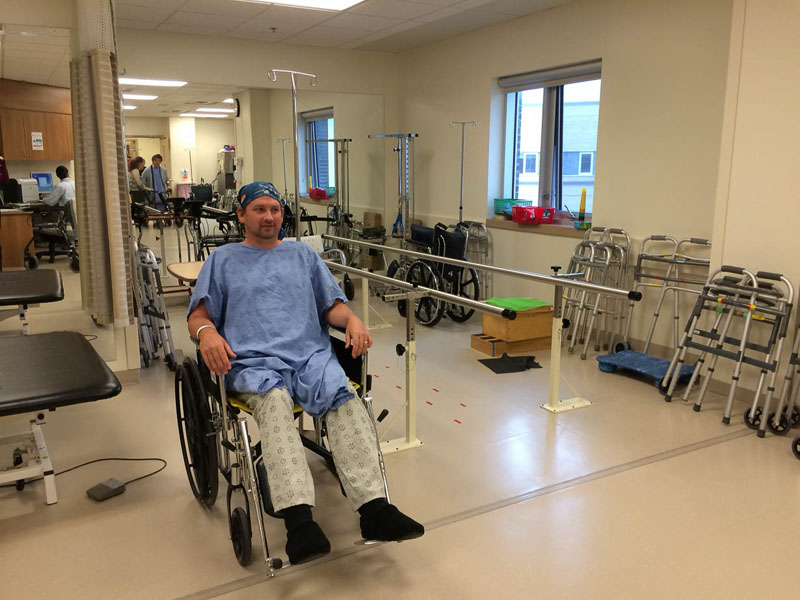 We scrambled around all morning and got everything done in a day.

The representative from CCAC said “I was just getting all the paperwork done to send you downstairs for physio next week. This is a great surprise to send you home!”  But she did warn us that she may not be able to do everything in a day.

It takes time for the medical company to ship a walker, it takes time to have the doctor write out prescriptions, and it takes time to contact the occupational therapist and physiotherapist. They may not be able to come to the house for several days.

We were determined to get him out of the hospital though and we had faith.

Sure enough, I got a call from the medical supply company telling me the equipment would be at the house in 3o minutes. All the proper organizations were contacted and when I called Dave at the hospital to tell him everything arrived, he said “Come and get me!” 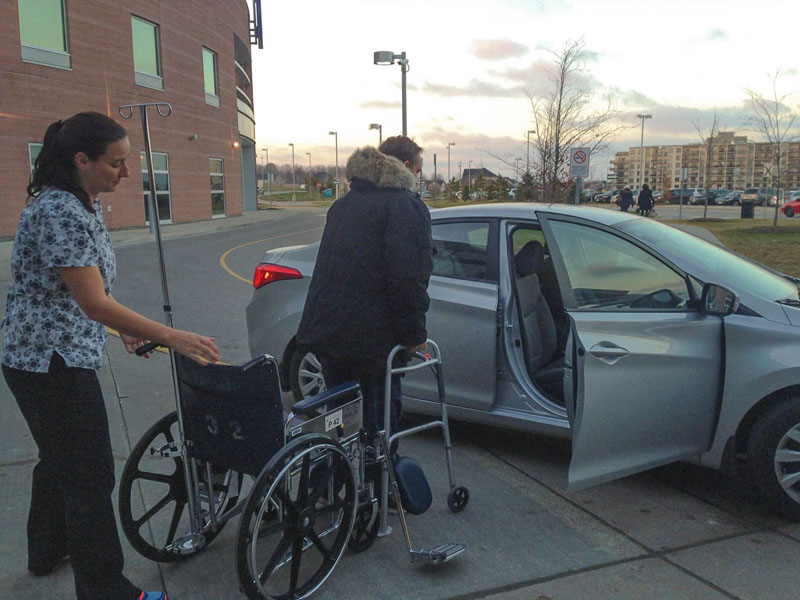 The nurses scrambled to have Dave's package of prescriptions ready for him and faxed them over to the pharmacy. We popped in on our way home to pick them up, but were told to come back in a couple of hours. It was a lot of medication.

I was expecting a three week supply of 10 prescriptions to be a small fortune, but did you know that if you have home care assistance in Canada, drugs are covered by insurance?

I went to the pharmacy and found out that 8 of our 10 prescriptions were completely free. It was an incredible feeling as I was expecting at least a $500 bill. 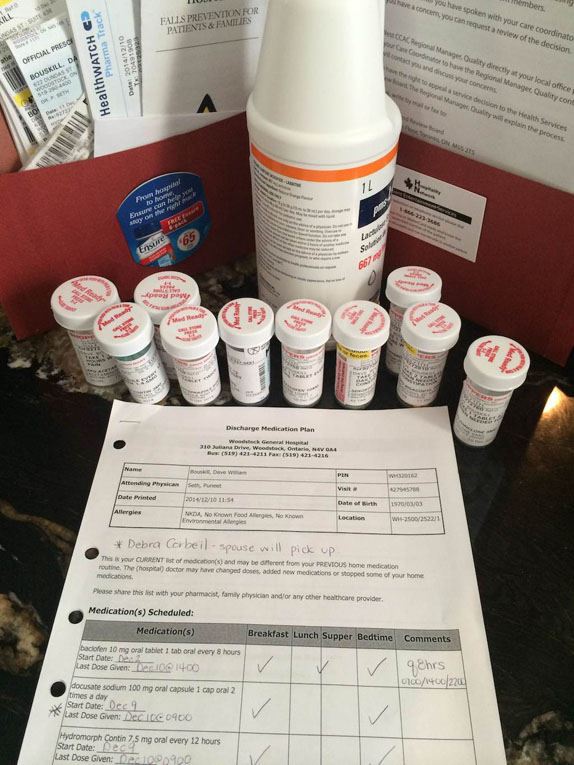 With Dave tucked comfortably at home, I could finally relax. For the first time in nearly three weeks I slept through the night.

I know Dave wasn't quite as comfortable, but I couldn't keep my eyes open. My man was out of the hospital and I was content. I drifted off to sleep, thinking just how lucky we are.

It's going to be a couple of months before he's fully recovered, but he's getting around with his walker and I've got him home.

Airlifted from the Amazon

The White House Called, but we can't come out to Play

Dave's Broken Back and a little Healing time