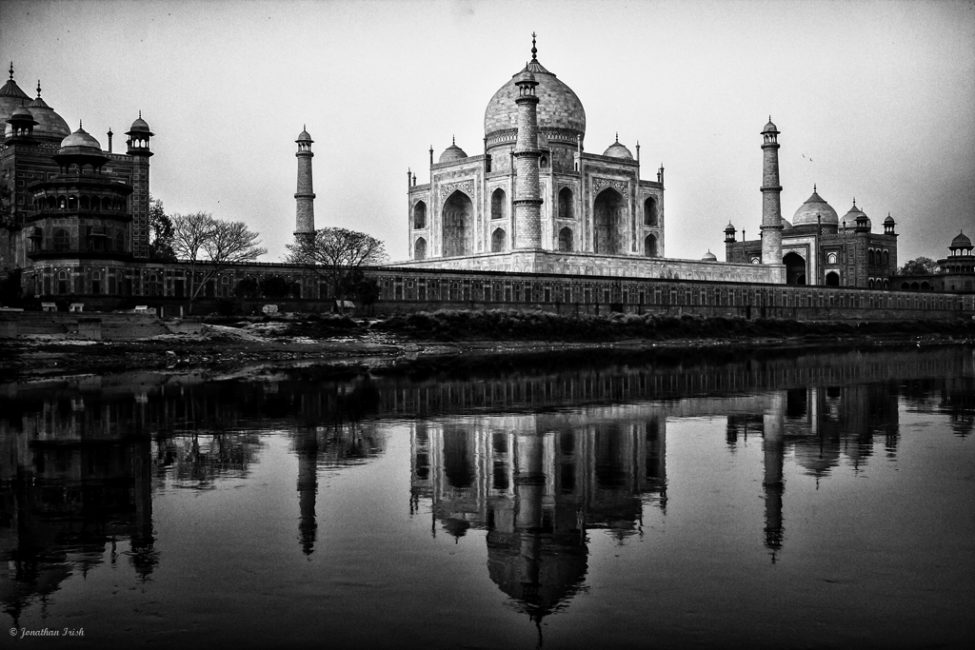 Hi friends. Today I share with you a Black and White photo of the iconic Taj Mahal, in Agra India, taken from the Yamuna River.

Built by the Mughal Emperor Shah Jahan in memory of his third wife, Mumtaz Mahal, The Taj Mahal is often referred to as the greatest monument to love ever built.

An incredible architectural feat completed in 1653 that is now a designated UNESCO World Heritage Site, one should be sure to not miss this incredibly beautiful white marble mausoleum.

The Taj Mahal in Black and White

Taj Mahal facts you may or may not have known:

I love this image…it almost looks like a drawing to me (which is partly what I love about it). I struggled whether to post this in Black and White or in color. In truth, the color version is just as beautiful, but in a different way.

The warm early morning color of the sun gave the Taj a beautiful pink glow, which is totally lost when it is in Black and White. And yet, something about this image…the texture and the lines……draws me to post it in black and white. I guess it comes down to personal taste…

I just love Black and White photos. What about you?

This was not an easy shot to get by any stretch. I knew that I wanted to get a different perspective of one of the most photographed sights in the world. But it’s hard (not impossible, though) to get that shot where EVERYONE else walks (i.e. within the Taj complex). So what do you do? Think outside the box.

While at the Taj, I walked to the very back of the walled-in complex and noticed the Yamuna river flowing behind and thought to myself, “Now, if I could get out on that water, that would be a much better photo.” I thought I noticed a little house and a small oar boat down the river, and felt pretty confident I could find my way to it.

So I put a plan into action: I’d come back even earlier in the morning the next day (about 5:30 or 6 a.m.) and would not get in line to enter the Taj complex, but would rather walk to the Northern side of the complex along the outside wall and try and find the owner of the little boat whom I would offer some moulah to take me out on the river for an hour or so.

(On a side note, some people don’t like to pay for things like this while traveling, but a few dollars here and there will really make a big difference not only in the shots you get but also the lives of the locals. Just don’t go overboard or pay too much.) And what happened? It all worked out smoothly…I found the owner and worked out a small charge for him to row me out on the river and hang there for an hour while the sun came up.

It was not only a tremendous photo opp, but also a very peaceful and serene way to experience the Taj (away from the crowds). As I’ve said before, you gotta dig and really work a subject to get a great photo….so next time you think you got the shot, ask yourself how you can improve upon the shot by looking at the subject outside the box (or in this case, outside the complex).