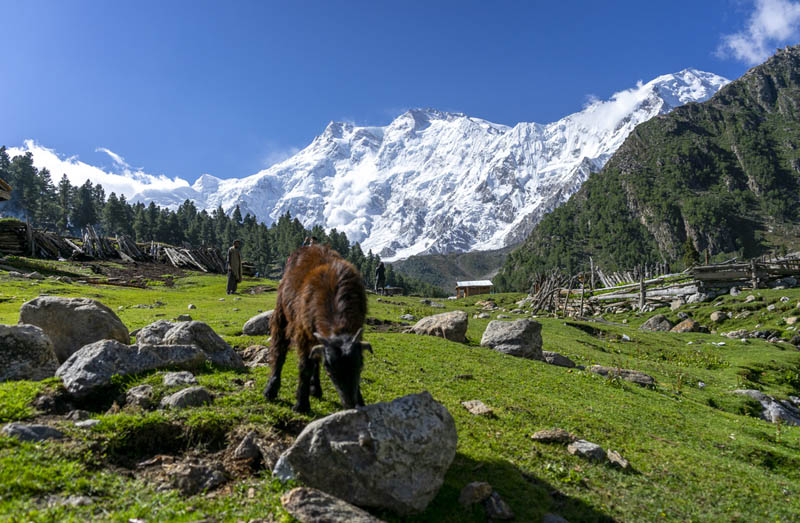 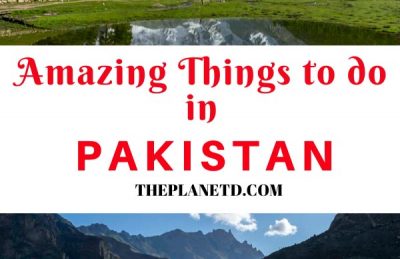 Pakistan isn’t usually the first country that comes to mind when planning a trip to Asia, but it should be on your radar. The country has so much to offer those who visit.

From epic adventures in the northern mountains to historical sights in the south. With the government’s recent efforts to make tourism more accessible through a new e-visa, visiting Pakistan has never been easier.

To inspire your Pakistan travel plans, I’ve rounded up 13 amazing things to do in Pakistan.

The Best Things to do in Pakistan

Getting to Fairy Meadows campsite is no easy feat, but it’s one of the most gorgeous places you could ever spend a night.

With incredible views of Nanga Parbat Mountain just outside your tent, it’s a paradise for mountain lovers.

How to Get to Fairy Meadows Campsite

To get to Fairy Meadows involves an hour and a half jeep ride up a mountain, which is not for the faint of heart.

The drive involves hairpin turns alongside a mountain with no guard rails.  After the jeep drops you off, another 2-3 hours of hiking is required to reach the Fairy Meadows campsite.

There are also horses available for hire if you aren’t feeling up for the hike.

What makes Fairy Meadows so special is the accessibility to Nanga Parbat, the 9th tallest mountain in the world.

The long journey will be all worth it when you first see the magnificent mountain appear in front of your eyes. It’s one of the most beautiful places to visit in Pakistan.

Fairy Meadows is the perfect base for hiking Nanga Parbat, but there are also smaller trails to go on around the campsite.

Pakistan is home to some of the world’s highest mountain peaks.

Pakistan has many exciting opportunities for trekkers making mountain climbing one of the top things to do in Pakistan.

One of the most accessible hikes in Pakistan is Nanga Parbat Base Camp. The 9th highest mountain in the world reaches a height of 8,125m.

It’s not common to be able to access one of the world’s highest mountain peaks without doing a multi-day trek, but Nanga Parbat Base Camp is only 8 hours round-trip.

The trailhead for Nanga Parbat starts from the Fairy Meadows campsite.

Although it can be done in one day, this hike is still challenging due to the altitude which goes past 4000m.

The first half of the hike, which goes to the viewpoint of Raikot Glacier, is much easier. It takes about two hours from Fairy Meadows and goes through a beautiful alpine forest.

This is a great option for anyone looking for a more moderate version of the base camp trek.

3. Soak in the Views at Baltit Fort

Baltit Fort is one of the best places to take in the views of the Hunza valley and learn more about the region’s history.

This fairy-tale-like fort was built in the 8th Century CE on top of a hill overlooking Karimabad, which was once the capital of Hunza district.

It’s strategically located so the inhabitants could control the seasonal trade between South and Central Asia, and spy on enemies from the top.

You can go on a guided tour inside the fort to get a glimpse of what life was like during that time.

Even if you don’t go on a tour inside, Baltit Fort is still worth visiting just from the outside.

It’s set high in the mountains, making it one of the most amazing viewpoints in Pakistan.

From the top, you can get panoramic views of the surrounding mountain landscape and valley below. It’s hard not to take a thousand photos here!

4. Drive through the Karakoram Highway

The Karakoram highway is one of the highest paved international roads in the world, linking China with Pakistan.

Regarded as one of the world’s hardest alpine climbs, just driving on the highway is an adventure in itself. It’s become a hub for adventure tourism in recent years, with expert cyclists taking to the roads.

Driving the Karakoram highway will take you through some of the most beautiful parts of Pakistan, as it runs through the Karakoram mountain ranges.

One of the best places to stop along the highway is Passu Cones, also known as Cathedral ridge. These unique mountain ranges are unlike anything I’ve seen before!

The Karakoram highway takes you all the way to the border of China.

To get to the border you’ll have to go through the Khunjerab Pass, which goes up to a total elevation of 4,673m! Since the elevation is so high, even during the summer months snow can fall.

With hairpin turns through the snowy mountains, this is one of the most scenic drives to take in Pakistan.

On the Pakistan side of the border, you can take out money at the highest ATM in the world which is a fun novelty.

The border is a popular spot for tourists and you will see many locals showing their Pakistan pride with flags.

It’s a great atmosphere to be around, especially with so many people seeing snow for the first time.

6. Shop at the local street markets

The markets are an important part of daily life in Pakistan. Although hectic, this is a great way to see how locals live and try some of the best food in the country.

Markets can be found throughout the country, but if you’re traveling through Karachi, don’t miss Jodia Bazaar.

Jodia Bazaar is one of the oldest, busiest, and largest markets in the country. Daily trade is estimated to be between 3-5 billion Pakistan Rupees!

Given its size, you can imagine walking through is complete chaos.

You can find just about anything you want at Jodia Bazaar. All imaginable groceries, live animals, textiles, stationery, and spices.

Walking through was a sensory overload, but one of the most memorable experiences I had while in Pakistan.

Lahore is the capital city of the Punjab province and has many interesting historic sights to visit. One of the most remarkable forts in Pakistan is Lahore Fort, a gorgeous piece of Mughal architecture.

The Fort has been destroyed and rebuilt many times throughout history, but what remains is well-preserved.

Another sight worth visiting in Lahore is The Shalamar Gardens.

This royal complex is located just 7km away from Lahore Fort. The gardens were influenced by Persian and Islamic traditions, and are a prominent example of Mughal Gardens.

Both sites were declared a UNESCO World Heritage site in 1981, for their outstanding universal value.

In Lahore there are two mosques not to miss:

10. Discover the ancient ruins of Sindh

If you’re interested in learning more about Pakistan’s ancient history, then you’ll want to visit the province of Sindh.

Sindh home to some of the most important historic sites in the country including the Mohenjo-Dara archeological ruins, one of six UNESCO world heritage sites in Pakistan.

Mohenjo-Daro was one of the largest and most advanced cities in the world during the Indus civilization period.

Built around 2500 BCE, they remain one of the best-preserved urban settlements in South Asia.

It’s best to plan a visit to Mohenjo-Daro either early in the morning or late in the afternoon, as the weather can be extremely hot and there is no shade at the site.

Sindh is also home to Ranikot Fort. Measuring an impressive 35 kilometers in length, with an area of more than 65 square kilometers, it’s one of the largest forts in the world.

The fort’s ramparts have been compared to the Great Wall of China, but unlike the latter, you’ll find hardly any other tourists here.

Being a predominantly Muslim country, Pakistan has a lot of impressive mosques to visit.

If you plan to visit mosques in Pakistan, then Shan Jahan should be high on your list! The display of tile-work is one of the most elaborate in the Indo-Pakistan sub-continent.

The elegant design and beautiful colors will leave you feeling mesmerized as you walk through.

Shan Jahan mosque took three years to build after starting construction in 1644. It was a gift to the people of Thatta for their hospitality from the Mughal King.

The mosque is well preserved and as you walk through today you can see how much work went into its creation. If you visit the mosque make sure to dress conservatively, covering your knees, shoulders, and head if you are a woman.

Attabad Lake hasn’t been around for long but has quickly become one of the most popular places to visit in Pakistan.

Just over 10 years ago, a massive landslide dammed the Hunza River, creating a lake that now measures 13 miles and is over 300m in depth.

During the spring and early summer, the lake becomes a stunning turquoise color due to the meltwater from the surrounding glacial mountain.

Since the creation of the lake, it’s become a hub for tourism and water recreation sports. One of the best ways to enjoy the beauty of the lake is on a boat ride, which will give you stunning views of the surrounding mountain landscapes.

For those who prefer more adrenaline, jet boat rentals are available at the docks. Or you can simply walk around the lake and soak in the beauty of the area.

If Pakistan wasn’t already on your radar, I hope this post could inspire you to add it to your list.

Aside from all these attractions, what makes Pakistan so special is the world-class hospitality you’ll find throughout the country. Combine this with so much natural beauty, it’s not surprising to see tourism growing each year in Pakistan.

Get there now before the crowds do!

Lora is a solo female adventure travel blogger living nomadically around the world. Raised on a rock in the middle of the Atlantic Ocean, she has a deep love for nature and wildlife.

Lora has traveled to over 57 countries and is on a quest to visit them all, seeking out the best adventures each one has to offer.

For more adventure travel inspiration and solo female travel tips, visit her blog at Explore with Lora or on any of the social media channels below.