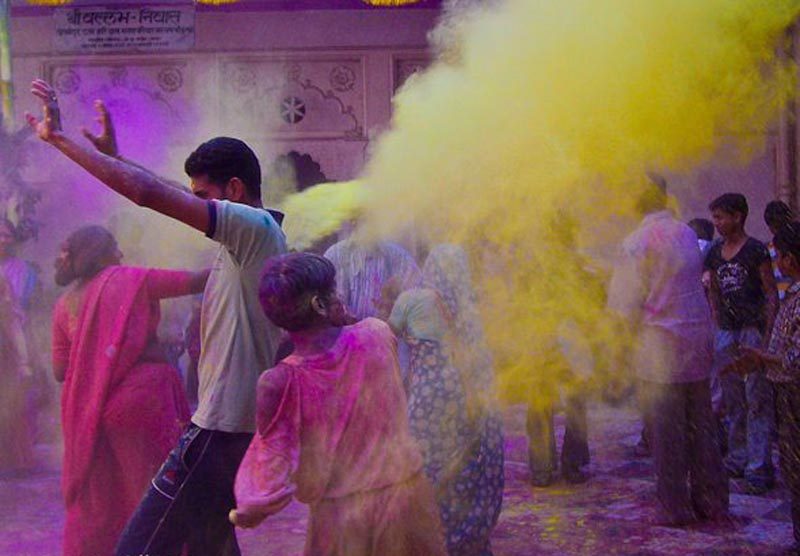 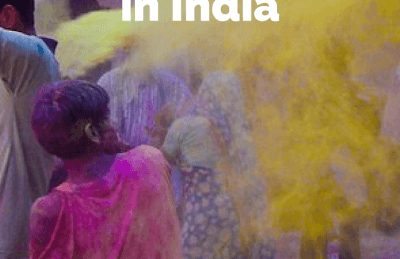 It is known as the Festival of Colours and it is unlike anything you’ve ever seen. Holi is a Hindu festival that takes place across India but nowhere celebrates the Holi Festival with more spirit than Mathura, the birthplace of Krishna.

We were traveling in Punjab at the time wondering where we should celebrate when we heard that the best places to celebrate Holi is in Mathura.

So we hopped on a train and took the 12-hour journey to meet our friends there.

And I’m glad we did!

What is Holi Festival?

Holi is a Hindu festival takes place across India each year to celebrate the arrival of spring and to signify the victory of good over evil.

While it is a Hindu festival, but most Indian’s celebrate since it is such a vibrant and festive occasion.

It doesn’t matter what your caste, creed, or religion is, today everyone comes together as one.

People throw colored powder through the air covering everyone with hues of the rainbow as they parade through the streets and dance in temples.

Everyone looks the same as their skin, hair and clothing are coated with red, green, yellow and everything in between creating a feeling of inclusiveness.

You can purchase powders from vendors on the street, but even if you don’t, you’ll be covered in powder regardless.

When is Holi India?

Each year the date changes for Holi as it takes place on the full moon day of the Hindu calendar month, Phalunga.

It marks the end of winter and the beginning of spring.

That means Holi can happen anytime between February and March.

How Long is Holi Celebrated?

But the celebrations have extended to several days beforehand.

During our time at Holi in India, the colored powders were being spread in full force four days in advance.

On the day we arrived, parades took place in the street with dancing and music blaring from loudspeakers. Everyone has taken to celebrating Holi for days!

For several days leading up to the festival, people gather wood to make large bonfires that are lit the night before Holi begins. This is known as Holika Dahan.

Holika was a demon in Hinduism who was burned to death by Lord Vishnu.

The sister to demon king Hiranyakashyap, Holika was asked by her brother to kill his son Prahlada.

The king hated his son because of his devotion to Lord Vishnu. He made several attempts to murder him, but Prahlada survived. That is when he brought his demon sister in to help.

Since the Gods had given Holika immunity to fire, she sat in a fire with Prahalada trying to burn him to death. Instead, the Gods punished her for using her powers for evil and she burned while Prahalada lived to rule as a wise king.

During the even of the festival, once the sun goes down, people light the fires to celebrate the triumph of good, Prahalada over evil Holika.

The fires burn late into the night and people are out dancing and celebrating to the wee hours of the morning.

The entire country is alive with energy.

Where to Celebrate Holi in India

If you are in Agra to see the Taj Mahal, it is an easy trip to Mathura. Mathura is located just 50 km north of Agra and is a very easy train ride.

It is also easily reached by Delhi by train making it an ideal location.

Word of advice, if you are going to celebrate Holi at one of the popular celebration destinations, book your hotel in advance.

When we got off the train, we couldn’t believe the crowds! It is overwhelming.

We foolishly arrived in Mathura with no plans or hotel and were stuck in a $4 per night hovel that left me not even wanting to use the toilet.

But at least we found a place, I have a feeling many people were left sleeping on the street!

Holi can be overwhelming

On the day of Holi, we wandered aimlessly through the streets of Mathura because we weren’t sure where we should start.

There were crowds building along the sidewalks, but we weren’t quite sure where the epicenter of the festivities took place.

Luckily, we stumbled across a small courtyard where a man caught our attention.

He beckoned us to join the festivities inside. Never being ones to refuse an invitation, we accepted.

Everyone welcomed us with open arms and smears of color.

We all came together under the colors of Lord Krishna.

Lord Krishna is portrayed with blue skin but the festival represents the rainbow of colors for each caste.

We certainly felt the love with Holi.

The Holi Head of the Temple told us that Holi is a time in India for all people to let go of prejudices, creeds, castes, and discrimination.

Women took turns dancing with me, swinging me around one after another. It was exhausting yet exhilarating all at once!

Everyone wanted to dance with us.

As the only westerners in the temple, we were somewhat of a novelty, but the people of India are genuinely welcoming and friendly.

I believe they wanted us to have the best time possible.

They even had Dave join in drumming at the head of the temple.

The men loved holding Dave’s hands high in the air as they danced and laughed in a circle.

Television cameras were covering the energetic dances in the courtyard and we were all encouraged to join in.

We were even stopped to give our views and comments on Holi.

We were filled with joy and praised the festival as one of the best and most unique we’ve ever seen.

If you celebrate the Holi Festival in India, you will have one of the most memorable travel experiences of your life!

The camera operators followed each of us as we did everything from dancing and spinning to drumming and singing.

The events of Holi can get a little hairy at times, and you have to keep an eye out for one another.

It’s easy to get lost. Everybody starts to look the same and it is easy to become separated.

I just held on to Dave’s hand with all my might when weaving my way through the thick crowds.

As a foreigner, you are sometimes targeted by overzealous festival-goers.

I am sad to report that women are often groped during Holi, myself and my friend Becca included.

Men can be aggressive when throwing foam or powder in your face, so be on your guard.

But for the most part, the Holi Festival is a wonderful and fulfilling experience.

Holi goes on for hours on end, and it eventually caught up to us.

We had been the center of attention for more than 6 hours straight and we were exhausted from all the smiling and dancing.

Happy be in the moment, we rarely refused a dance with the women and gents, but in time we could barely stand any longer and needed to get back to our guesthouse to wash up.

Cleaning up after Holi

It is not a fun process cleaning up after Holi.

The sun is hot and the mix of colored foam, water, and thick powders has baked on our skin.

The mixture of powder and water-stained our skin and hair, and we have to scrub until our skin is raw to eventually look close to normal.

It took over an hour to clean ourselves up with the bucket and scoop bath and the four of us never quite make it back to our former selves.

My hair was pink for weeks, and our feet? Well, our feet never did recover from Holi.

We tossed our clothes in the trash and found bits of powder in every crevasse of our body for days to come.

But it was worth every moment.

Holi Festival is a once in a lifetime experience.

To take part in Holi while enjoying with great friends is something that we will never forget!

Enjoy this Holi guide? Why not pin it to Pinterest for future travel planning?

5 Experiences to have in Arunachal Pradesh