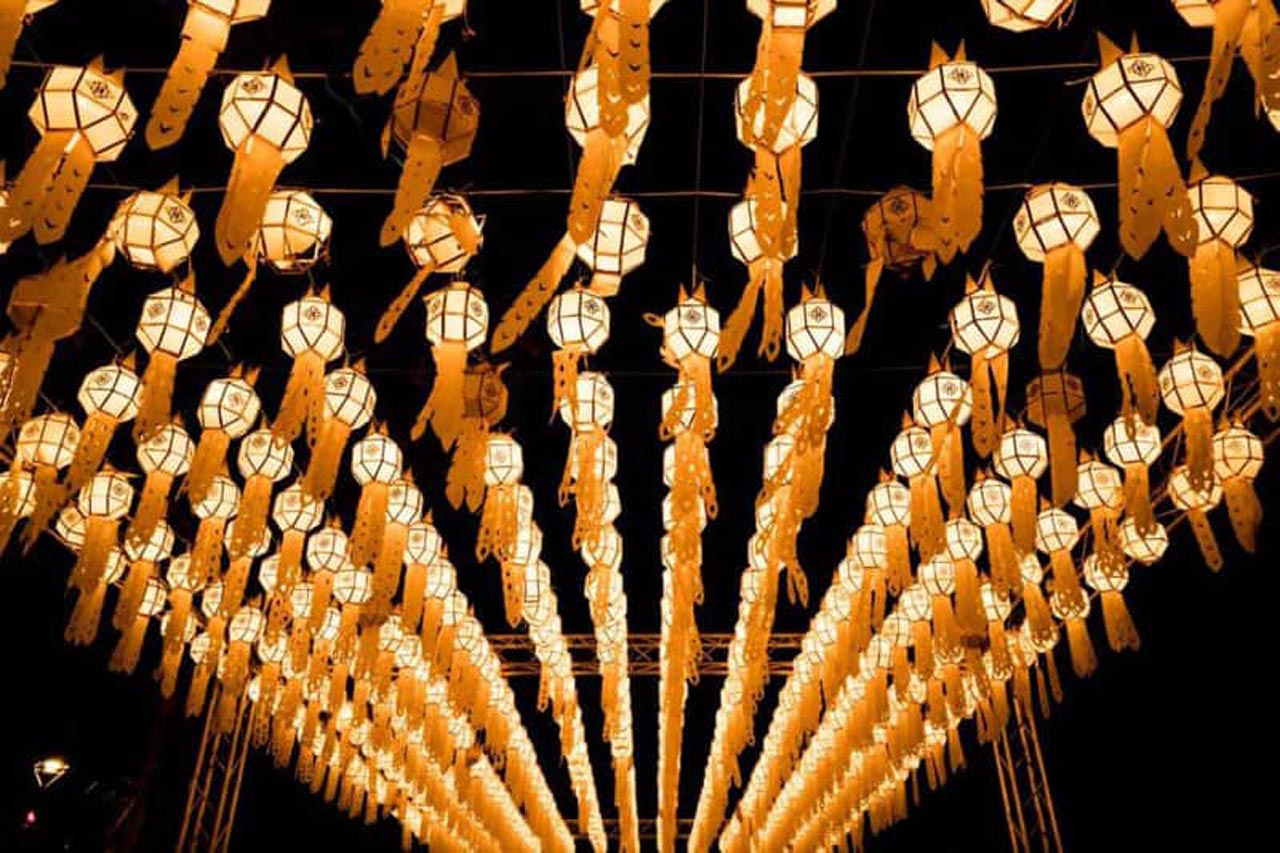 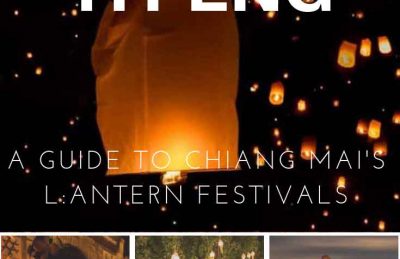 One of the most beautiful celebrations in Thailand is definitely in Chiang Mai during the Loy Krathong and Yi Peng festivals.

People often confuse Loy Krathong with Yi Peng. We always thought they were the same thing but Loy Krathong and Yi Peng are two different festivals.

The two festivals take place at the same time over a four-day span in November. Each year the date changes to coincide with the full moon of the Thai Lunar calendar.

Thanks to social media, people are flocking to Northern Thailand each year to take photos of paper lanterns floating on rivers and being released in the sky.

But there is more to Yi Peng and Loy Krathong than a photo opportunity.

Loy Krathong is the festival where candles are placed in banana leaf boats and set on fire as they sail down the Ping River to thank the Goddess of water for a good harvest.

It is also a time to let go of negative thoughts and ask for forgiveness of your sins.

People also make a wish as they release the lanterns to the river.

Incense, flowers and trinkets are also placed inside the banana boats. Some Krathongs are very elaborate.

There is even a competition for the best Krathong, so many people go all out!

Vendors line the road leading to the Ping River and you too can purchase your own Krathong to light and set free into the water.

Foreigners are welcome to take part in the events and you can even join in the lighting celebration on the streets to light your own candle as you make a wish.

We highly recommend taking part in the celebrations and entering the temple grounds to see the lanterns.

There are beauty pageants, contents, temples bustling with activity as monks pay respect to Lord Buddha.

The biggest ceremonies of Loy Krathong take place at the Ping River where the Krathongs are released.

Yi Peng festival (also spelled Yee Peng) is where lanterns are released into the air setting the night sky ablaze with a golden hue.

This is the one that attracts all the people hoping for that perfect Instagram shot.

Candles are placed inside the lanterns, and as people light their crafts they make a wish.

The flame heats the air within the lantern causing it to rise where it floats into the sky until the fire goes out.

It is an incredible sight to see thousands of lights sparkle like shining stars in the night sky.

Be Kind to the Environment – Eco Friendly Yi Peng

Important Note: Be wary of cheap lanterns made out of metal, this is not good for the environment.

Too many tourists released lanterns made out of wires that have a huge impact on nature.

Be responsible and only buy biodegradable bamboo framed lanterns before you go to Thailand.

You can buy biodegradable floating lanterns on Amazon – Set of 5 Large for $23.99

We Chose Not to Release our Lanterns

Unfortunately, we didn’t release our lanterns because when we opened it, we saw that the frames were made out of metal.

We didn’t want to end up strangling a poor dolphin or have our metal hoop wrap about a turtle, so instead, we took photos and videos of the event crossing our fingers that others in the crowd chose wisely.

We learned a valuable lesson to buy our lanterns days in advance to make sure we get an environmentally friendly craft in advance.

We suggest bringing your own Wirefree lanterns to set free in Thailand so you don’t hurt the environment or fragile wildlife.

You can purchase on Amazon.

It was impossible to find lanterns around Chiang Mai leading up to the event.

We looked everywhere but only found that one vendor the night of the release. I think Thailand should work on creating stricter rules.

If they let shops sell lanterns in advance, they wouldn’t have black-market vendors selling wireframes on the street (like we unwhittingly ended up getting.)

One thing we can tell you is that if you are really keen to see lanterns released in Chiang Mai, you are wise to book a spot for one of the mass releases in advance.

There are several types of tickets available offering VIP access to general admittance.

Our request was last minute, but they did respond (albeit no tickets were available) so it seems like a good site to book.

And I have seen others post saying that they booked here too.

We were in Chiang Mai working on an assignment, but it just so happened to be the Loy Krathong festival when we arrived. Needless to say, we didn’t plan very well before arriving.

We didn’t have a clear idea of what the Loy Krathong or Yi Peng festivals were all about. All we knew was that we wanted to be a part of it.

So, we took an Uber (very cheap in Chiang Mai by the way) from our hotel the Rati Lanna Riverside Resort to the Old City.

It’s very easy to get around Chiang Mai by tuk-tuk and songthaew as well.

Once you are in the old city, you can walk anywhere you like to the celebrations.

It was easy to find the Loy Krathong celebrations around Chiang Mai, but the Yi Peng festival was a bit more confusing.

Since we were too late to purchase tickets, we stayed in Chiang Mai to celebrate.

The locals have to celebrate Yi Peng somewhere right?

After a lot of digging, we learned that there might be a lantern release at the Nawarat Bridge.

We kept our eyes peeled for lanterns for sale on our way to the bridge excited with anticipation that we’d finally be witnessing a lantern release.

But we had no luck.

There were vendors all around the river and road leading to the bridge, but they were selling boats and candles, flowers and decorations,

Nobody sold the lanterns that float into the sky.

The sun was starting to set, the crowd was forming on the bridge, but I barely saw anyone with a lantern in their hand.

Did we go to the wrong place?

Finally, people arrived with paper lanterns and I asked everyone where they got them. Each person had a different answer.

I decided to set out to find some lanterns and left Dave to hold our place.

Running frantically through the streets of the old city, I finally found a vendor tucked into a corner with a crowd around him.

I shoved my way through the people, purchased 4 lanterns and ran back to the bridge before dark.

The crowd was thick with people and I had a hard time finding Dave, but sure enough, he had a great spot at the side overlooking the river.

We had about 10 minutes to spare before people started lighting their lanterns and releasing them into the sky!

It was absolutely beautiful.

We had been to Chiang Mai before, but to see the temples lit with thousands of candles creates an entirely different atmosphere.

We marveled at work put into lighting up the temples and spent the evening going around to each wat and pagoda to see how they were lit.

Loy Krathong takes place over the entire four days whereas the Yi Peng mass release happens only once; the night of November 23.

Chiang Mai is by far the busiest and most attended by foreigners.

Other Places to Celebrate Loi Krathong in Thailand

Tourists are most attracted to Yi Peng as it is the more visually stunning festival. But Loy Krathong is visually beautiful as well.

Plus, Loi Krathong continues over several days giving you the chance to really delve into the celebrations.

“It is a truly magical time to visit Chiang Mai”

Temples are lit with candles, lanterns hang from the roofs of shops, trees are decorated with lamps, and the water is lined with sparkling lights.

Lanterns decorate all the streets of Chiang Mai and the city is beautiful.

There are many celebrations that you can take part in.

Yi Peng and Loy Krathong attract a massive amount of tourists, it is wise to book accommodation well ahead of time.

Chiang Mai is very crowded during the lantern festivals and people book way in advance.

We stayed at the Rati Lanna Riverside, but there are many hotel options in the city to suit all budgets. We enjoyed the Rati Lanna because it was quieter than other times we stayed in Chiang Mai.

It’s a little farther from the Old City (a 30-minute walk) but getting around Chiang Mai is cheap and we preferred the quiet.

It will save a lot of headaches.

We spent four days taking part in lantern festival events. There is a lot to do in Chiang Mai day or night.

Nighttime wasn’t the only time to explore Chiang Mai.

There are many things you can do in Chiang Mai during the day. If you decide to visit during the lantern festivals, be sure to give time to explore the city and surrounding hills too.

Thai people are welcoming and as friendly today as they were when we first visited in 2000.

We will always have a soft spot for Thailand and its amazing festivals that happen throughout the country.

For more information and tickets you can visit Yee Peng Festival

Are you going to the Yi Peng Festival in Chiang Mai or the Loy Krathong Festival in Thailan? Save this guide to Pinterest for future planning.

When is Loy Krathong and Yi Peng Festivals?

Yi Peng and Loy Krathong are normally celebrated in November during the full moon of the twelfth lunar month. Read more here.

Where is Yi Peng Festival Celebrated?

What is the difference between Yi Peng Festival and Loy Krathong?

Yi Peng festival (also spelled Yee Peng) is where lanterns are released into the air. Loy Krathong is the festival where candles are placed in banana leaf boats and released down the Ping River