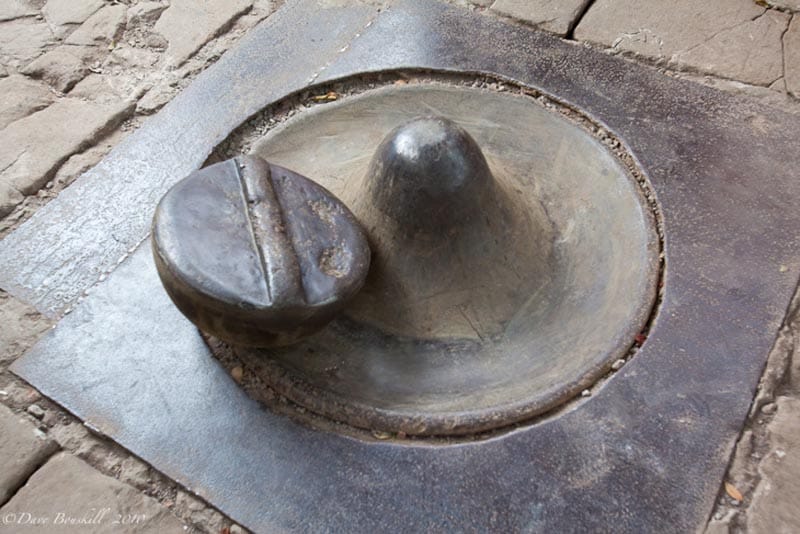 “Are you an honest person? Do you think you will go to hell?” These we the questions we were faced with as we approached the first steps of the Ghost City of Fengdu during our cruise down the Three Gorges of China.

The Lost City of Fengdu, China

Our guide, was a petite chipper local resident full of knowledge and ready to share it over her small loudspeaker that was slung over her shoulder.

After a short ride on an electric golf cart from the ship to the entrance we were dropped at the gate of what is supposed to be one of the most sacred sites in this province of China.

I must say I wasn’t overly excited as the entrance was littered with new wooden shacks that were recently erected to house all the vendors that would flock here to earn a living in the new season. They had moved the gate and entrance lower as the whole “ancient” city was under renovations.

Sacred Sites are Being Replaced with Exact Replicas

It seemed a little odd to me that, basically everywhere in China, sacred sites and old temples are being torn down and replaced with new and improved structures.

I thought China was about history and ancestory. Perhaps I was wrong. When I asked our Intrepid guide Karen, she told me that they look at it as building a bigger and better home for the gods.

Chinese people believe that by doing this it makes the gods happy. Who was I to argue?

The Entrance to Fengdu

As we headed up the hill to the old entrance our guide told us that we would have to pass three tests in order to be allowed in the 600 year old temple at the top.  She said that if we passed all three we would be deemed innocent and pure of heart and would be allowed to enter.

We made through the first construction zone and were faced with the first test.

There were three bridges; one for health, one for judgment and one for money.

Our first test was to walk across the “Judgment Bridge.” You must cross the bridge while thinking of someone you want to spend eternity with, in nine steps, without slipping or falling on the bridge itself.

If you slipped and fell you would be judged as a bad person and spend your eternity in the rivers of hell. Obviously you would lose your credibility as an honest person.

But we all made it across unscathed and were deemed worthy to continue to the next test.

Looking in front of me I could see a crowd of people gathered around what looked like an ancient game of spin the top.  Further investigation revealed it was not that at all but our test number two.

In this test you had to prove you were a strong man and good husband material. (What this had to do with getting into the temple at the top I still have no idea).

We were told that the stone weight 200kg and we had to roll it around and balance it on top of the pedestal. Who wants to try? Well instead of having my manhood put into question in front of hundreds of people I graciously volunteered my fellow Intrepid Traveler Randeep to give it a try. He stepped in and was able to roll it twice, but there was no way it was going onto the top of that pedestal.

We had failed test number two. Or had we?

We were told to step aside and see how it was done. A small stocky Chinese farmer emerged from behind the crowd and rubbed his hands together.

Then in one quick motion the 200kg rock was balancing on top of the pedestal. Impressive. Apparently he is the only one in the village that can do this and it took him 2 years of practice.

That made Randeep and I feel better. I guess by having him do this it gives us a pass on test number two.

Up another flight of stairs, we came to more temples that were under construction. I felt like I should be wearing a hard hat and Safety boots. Cranes loomed above us and jackhammers broke what was probably once a peaceful spiritual journey. We were told that when we get to the 600 yr old temple at the top we should make sure and take photos as it was being torn down and rebuilt at the end of the year.

Approaching the gate to the final temple is a little daunting.

The road is lined with statues of gods and they stare at you as you walk up to the entrance. Crossing this gate is not as simple as stepping over the threshold. If you are a man you must step over with your left foot or you will be turned into a woman and vise versa for the ladies. Now I don’t know if I believe this but I wasn’t about to take a chance.

Left foot forward I entered the gate to the final challenge.

What would it be? Something daring I assumed. Well not exactly. At the entrance to the final temple we were faced with the challenge of standing on a small rock ball with one foot and counting to three all while looking into the temples entrance. Sounded easy enough to me.

As my fellow companions faced the final test I could see that the criteria for passing this challenge was solely based on how fast you could count to three. Approaching the ball I confidently stepped up, stood on one foot and proceeded to count to three as fast as I possibly could. As everyone praised my extraordinary fast counting skills, I was ushered through the gate and greeted with a splendid 600 yr old statue and the comforting knowledge that I was not going to hell!

The Great Wall of China