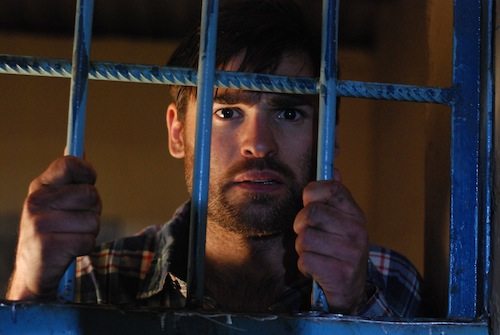 We first heard about Locked up Abroad while traveling in Jamaica. Our travel mates were chatting about all the different ways that clueless tourists manage to get themselves thrown in jail.

I couldn’t believe the stories and just had to see this TV series for myself. When we returned home, we caught a few episodes and found them to be very entertaining.

It’a amazing to see what people think they can get away with in other countries around the world.

If you aren’t allowed to do it at home, chances are it’s illegal in other parts of the world as well people!

Don’t Get Locked Up Abroad

When National Geographic Channel asked us if we wanted to review an episode and give some of our own tips to our readers about “How Not to Get Locked up Abroad” we just had to take part.

Besides, I was itching for some English TV and couldn’t wait for them to send me over the link.

The latest episode tells the tale of Dwight Worker, an American who attempts to smuggle cocaine out of Peru and into the US by hiding it in a shoulder cast.

He nearly makes it out but is stopped at the Mexican border where he’s thrown into the terrifying Black Prison of Mexico.

Life becomes a living hell for Dwight and after surviving a stabbing, a hunger strike and a stint in the psychiatric ward, he concocts an elaborate plan to escape.
Only one other person has ever escaped the Black Prison and that was Pancho Villa.

I was on the edge of my seat during this episode. I have to admit in the opening scene, while the real Dwight Worker uttered the words, “I went to Peru to smuggle cocaine” I channeled the movie Jerry McGuire and thought “you had me at cocaine!”

After Watching the Episode while riding a bus in Spain, I decided that I should give my fellow travellers some trip advice. People need to be informed of all the strange laws in those off the beaten path destinations so that they can remain free and happy during their own around the world adventures.

Being an informed traveler is a happy traveller and will keep you from being Locked Up Abroad!

Odd Laws from Around the World

1. Don’t Kill Sasquatch – In British Columbia, Canada it is against the law to kill a Sasquatch. So if you find yourselves out in the woods and sasquatch comes into your camp, you can scream and you can hide, you can have a cup of tea with him, but don’t ever pull a gun on it. Only in Canada eh?

2. Don’t kill a cow in India – Cows are sacred in India and if you kill one, even by accident, you are going to jail. How do you kill a cow by accident you ask? Well, if you hit it with a car, bus or train, you’re in trouble. If you feel sorry for one and decide to feed it some leftover food and it chokes and dies, you’re in big trouble.

3. In Thailand, do not insult the King. I remember an incident where a man peed on the King’s statue and was arrested. Thailand’s King is revered and you will not have a lot of sympathy from anyone if you do something against him. Even the slightest insult could put you in jail.

4. Do Not Buy Alcohol in Sudan. Sudan is a dry country and if you buy alcohol, you’ll end up in jail. Keep your binging at bay and buy some in Ethiopia once you cross the border. Kids will be eagerly waiting for you to sell you a bucket full. They know that travellers can’t stand to be without beer for long.

5. Don’t eat in public during Ramadan in the United Arab Emirates. You may find yourself in the big house. I know that two tourists have seen jail time for doing that exact thing in the past, so don’t do it when you go.

6. Don’t overstay your Visa – especially  in Central Asia. When we were driving in the Mongol Rally, a participant landed in jail for overstaying his visa in Tajikistan. This can be a very big no no in many countries and if you don’t pay attention, you could spend quite a while behind bars.

7. Don’t pee in the ocean in Portugal – Flipper doesn’t pee on your lawn, so don’t pee on his or you’ll find yourself having a run in with the law.

8. Don’t smuggle cocaine anywhere – I know it’s totally weird right? I mean, who would have thought that smuggling drugs would land you in jail? Oh, I know the thousands of tourists who are in jail right now for smuggling cocaine.

So the moral of this story is, do your research before you travel, know the laws of the country you visit and if you think that you may be doing something against the law, chances are you are probably right.