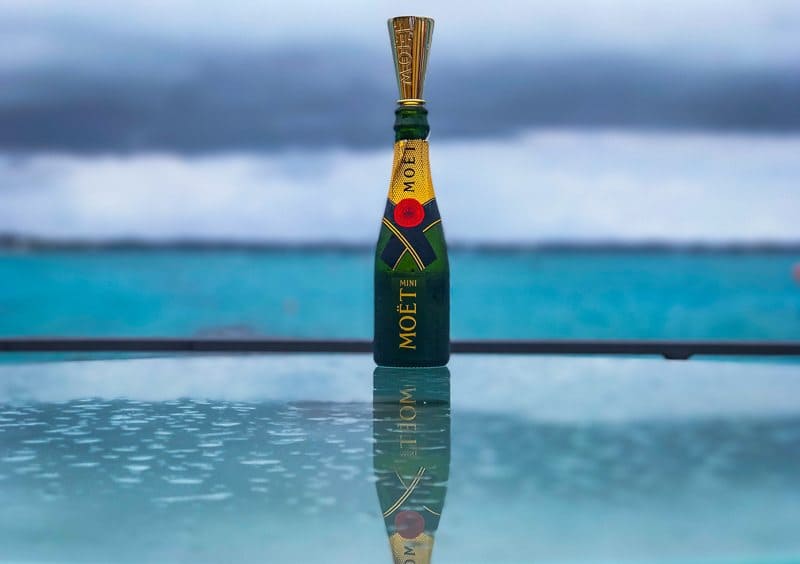 Bermuda is a destination we've often heard of but didn't know anything about. I remember the legends of the Bermuda triangle while growing up but for the most part, it's been a quiet destination on our radar. That is until the America's Cup Superyach Regatta took the island nation by storm.

Bermuda and a Superyacht Regatta 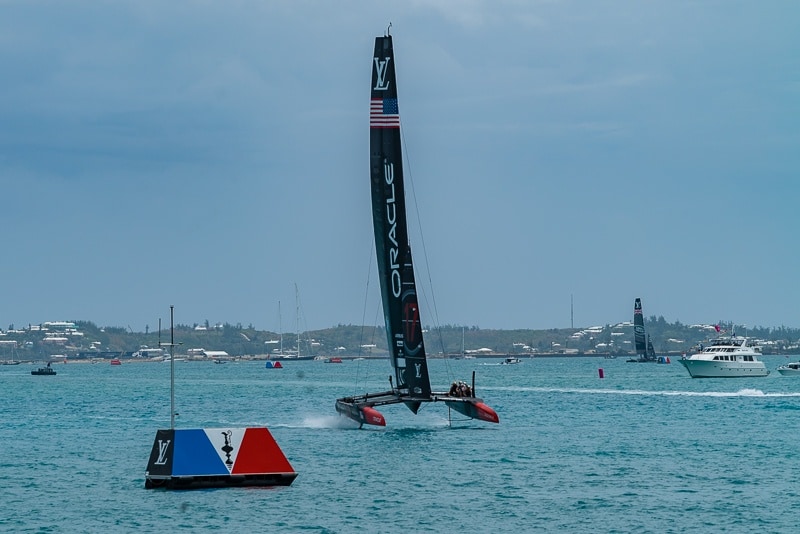 We were invited by Oracle Team USA and Air Bus to visit Bermuda and cheer on the team during this massive Superyacht Regatta.

The America's Cup is the oldest trophy in history dating back to 1851. 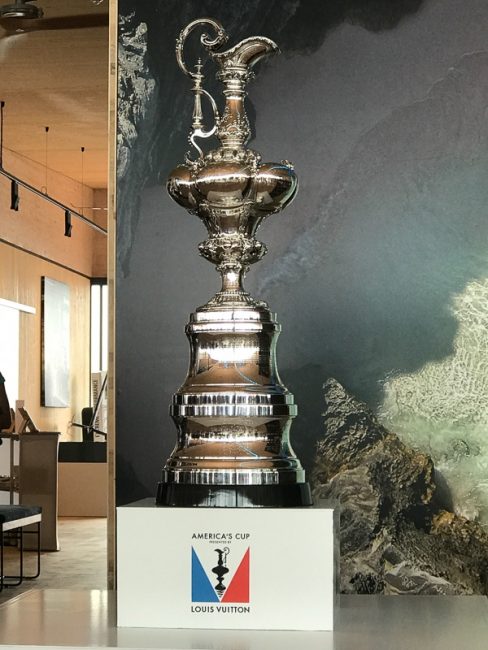 The Trophy everyone is going for America's Cup

On August 22, 1851, an American team raced against 15 British ships around the Isle of Wight. Rumour has it, Queen Victoria was watching and when the American team came racing to the finish line, she asked her aid, “who was second?” His answer went down in history by stating, “Ah Your Majesty, there is no second.”

For the next 136 years, America claimed victorious until it was finally defeated by the Australians in 1987. 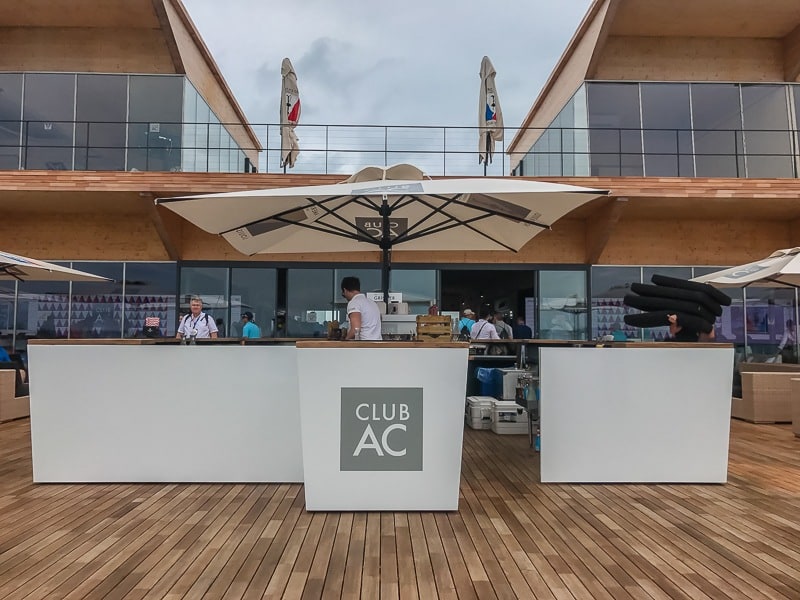 The VIP Lounge at the America's Cup in Bermuda

As we sat in the VIP America's Cup lounge to watch the race, it was once the American's sitting pretty as reigning champions.

Airbus played a key roll developing the technology used on the yacht to make it go faster and fly higher.

Yachting has changed immensely over the 166 year history. The biggest changes have happened in the last decade. 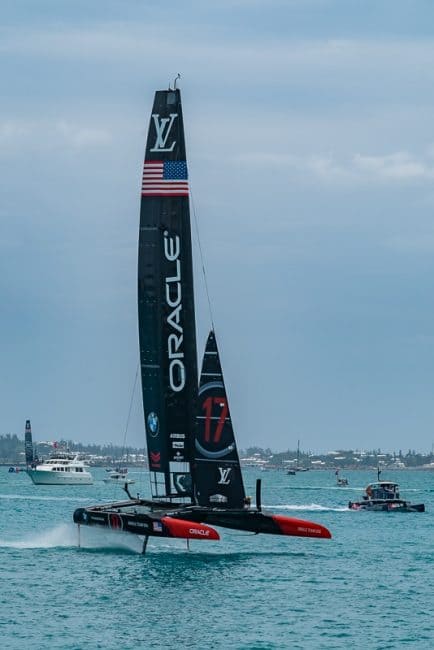 The Oracle Team boat at the America's Cup

I'm not sure if you should be able to call it the oldest continuous sports trophy when the race isn't even the same anymore. I mean, these yachts don't even use sails. Oh, and they're not proper sailboats anymore either, they're catamarans.

America's Cup superyachts use wings from airplanes as their sails. They're not flapping canvas sails anymore, they're ultra lightweight, solid wings!

And that is where Airbus comes in.

The race boats are more like flying aircraft than yachts.

The day we arrived, the local news reported that New Zealand flew around the entire course. When they said flew, they meant it.

The hull of the catamaran never touched the water. Instead, the technology created by Airbus and other aeronautics companies sliced through the water.

America's Cup catamaran's race on foils. Skinny little shark fins that lift the hulls right out of the water. They're literally hanging on by a thread. 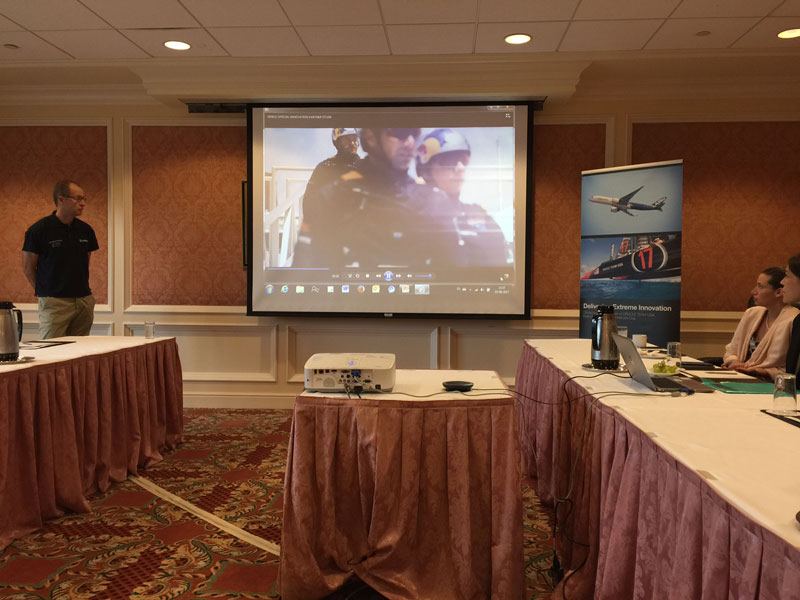 Learning about the technology from Airbus

We had a few meetings and lectures to attend where engineers, CEOs and other important people told us about the innovative technology and it was impressive. They are certainly a passionate bunch of people who live and breathe yachting. 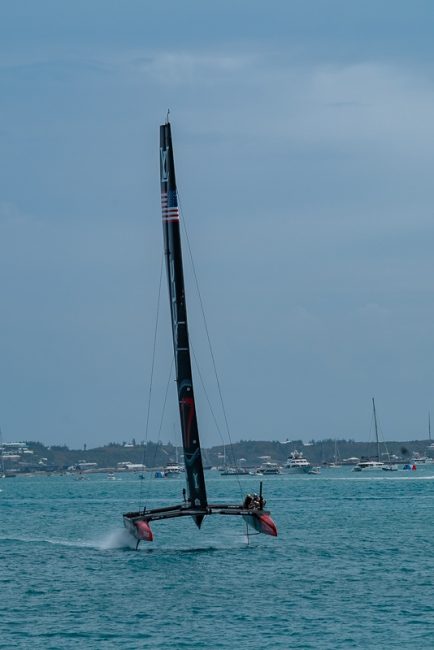 These Yachts can literally fly.

I can understand why it is one of the most expensive sports in the world. When there is that much money on the line, you better be passionate.

Airlines use this work to push the envelope and test new materials. What they use on America's Cup yachts, just may be used on regular commuter planes in the future.

The island of Bermuda is stunning.

Bermuda was a natural fit for an America's Cup event. Historical wind data indicates there should be racing conditions 90% of the time during the event in June!

Bermuda is also a beautiful vacation destination that is sure to attract the high rollers that frequent America's Cup events. 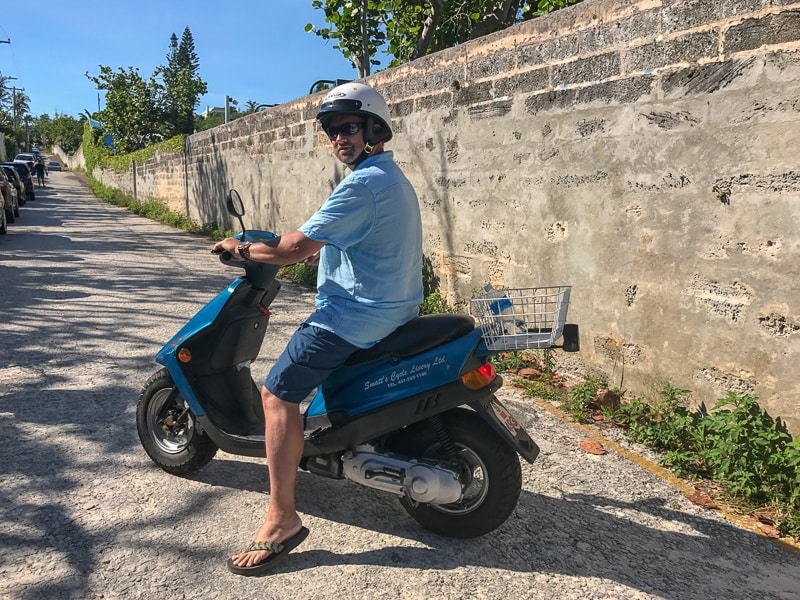 We took a day to explore the island by motorbike and fell in love with Bermuda.

The clear blue waters and pink sand beaches are inviting. 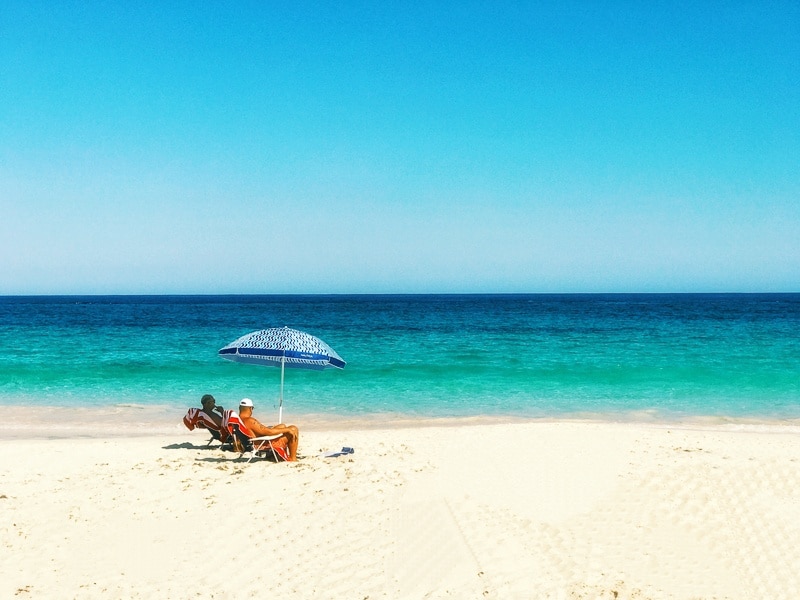 Bring on the beautiful beaches of Bermuda

Bermuda isn't located as far south as most Caribbean islands, but the water warms quickly. When we attended at the beginning of June, the air was hot outside and the water was a balmy 78 degrees Fahrenheit.

There are plenty of water activities from kayaking, snorkelling, diving and of course sailing. 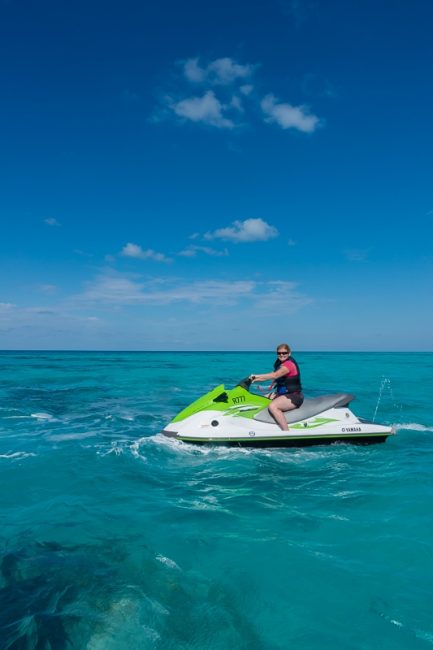 Get out on the water and explore by Jetski

We booted around the island one morning on a jet ski where we saw sea turtles in the harbour and plenty of fish out on the reef.

Bermuda is a wealthy island filled with beautiful homes and heritage buildings. I loved taking in the pastel colours of waterfront properties. 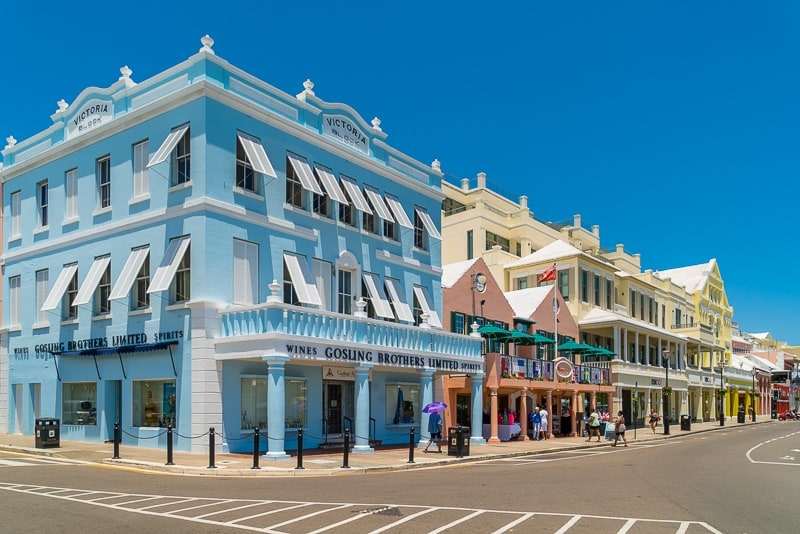 We loved the town of Hamilton, Bermuda.

The town of Hamilton is picturesque and filled with waterfront cafés and shops.

I couldn't understand why a tourist town would shut down on a Sunday though. Bermuda has a shorter tourism season than other tropical islands and you would think they'd take advantage of the influx of visitors and stay open on a Sunday.

We were disappointed to go downtown to a nearly deserted city. 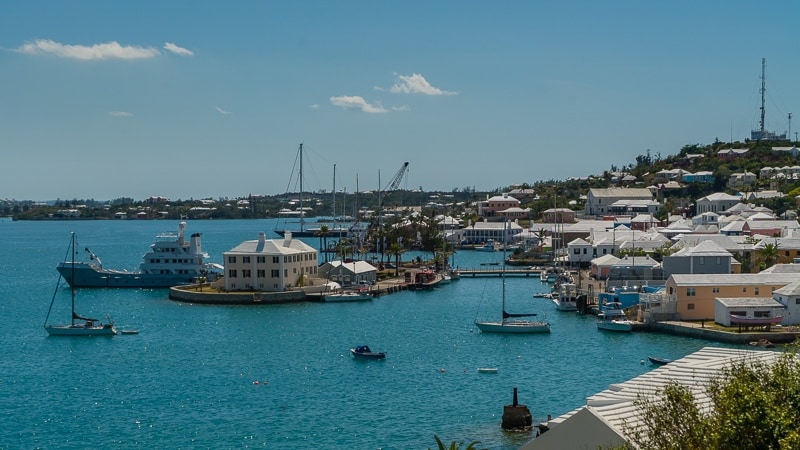 The other side of the island is equally as beautiful

Lucky for us, we were on a motorcycle, so we made an escape to the other side of the island to see St. Georges.

St. Georges is a UNESCO World Heritage Site dating back to 1612. It was the first permanent English settlement on the island. and it's the oldest continuously-inhabited English town in the New World. 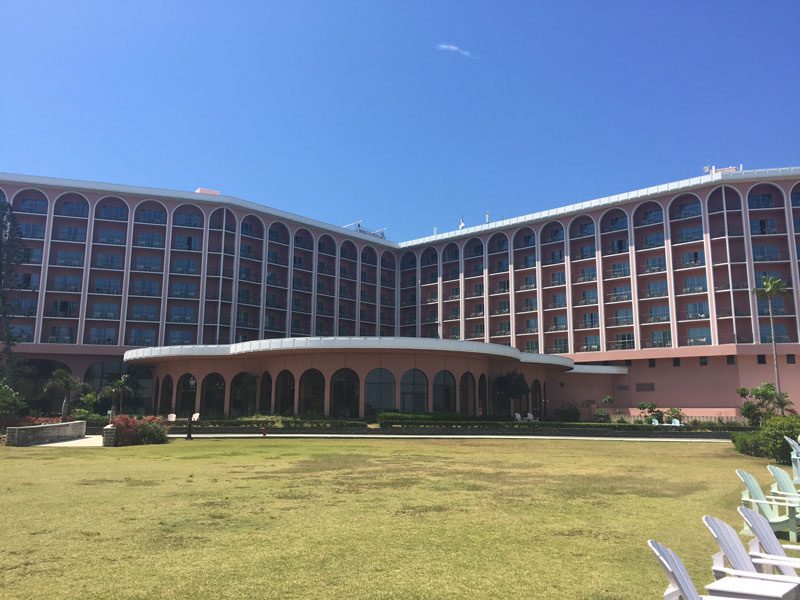 The Fairmont Southampton in Bermuda

We stayed at the Fairmont South Hampton hotel in Bermuda and it was wonderful. Located high on a hill overlooking the island, the Fairmont stands proud above everything else.

On one side is a private beach located next to the famous Horseshoe Bay Beach and on the other is boat docks. 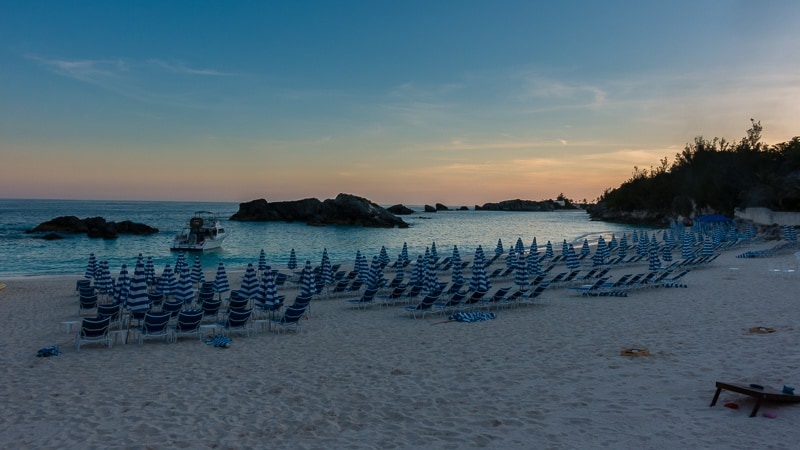 The private beach at the Fairmont Southampton in Bermuda

We rented our motorbike at the Fairmont for $75 + insurance that they make you buy for $15 for the day. It may be pricey, but we loved having the freedom to explore the island.

The Fairmont offers free shuttles to the beaches and docks and shuttles twice daily to Hamilton.

There are also public busses that go all around the island, so you don't necessarily need to rent a bike, but we highly recommend it.  (you can buy bus tokens at the Fairmont and take the shuttle to the bust stop) 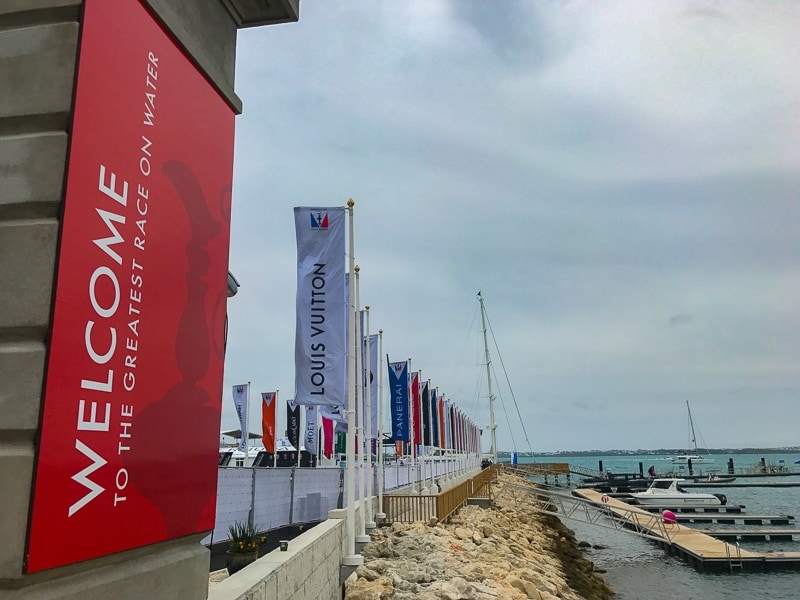 The America's Cup takes place at the Royal Dockyards in Bermuda

The America's Cup took place in Bermuda at the Royal Naval Dockyards. These were once Britain's largest naval base outside the UK.

Bermuda reclaimed 10 acres of land to create the perfect party spot and grandstand to watch the race. 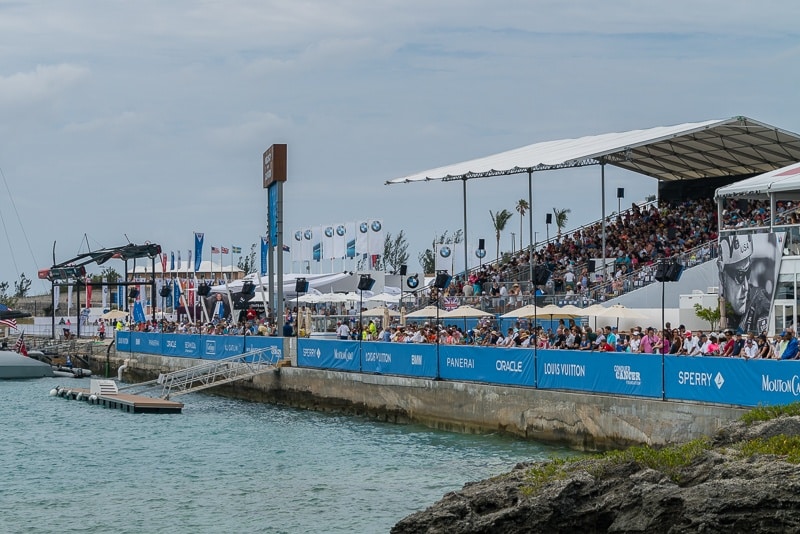 The Grandstands are a perfect place to watch the race.

It's a festive event with bands playing, activities, food stands and champagne lounges. We were fortunate enough to have access to the media room and America's Cup Lounge.

It's a whopping $600 US per person to enter, but you have a front row seat to the race with private screens, food and endless cocktails.

We were greeted with champagne. Not a bad way to spend the afternoon

When we entered the bottles of Moët et Chandon were freely handed out and we felt like a million bucks standing on the docks watching these multimillion dollar ships fly by.

Just how rich are the people inside this lounge with us? Who goes to the America's Cup? And who can say they've been front and centre watching the greatest race on water?

We feel lucky and privileged to have experienced not only the beautiful island of Bermuda, but to experience an America's Cup. Millions of people will be glued around the world to see who wins and we can't wait to follow along on the next one. 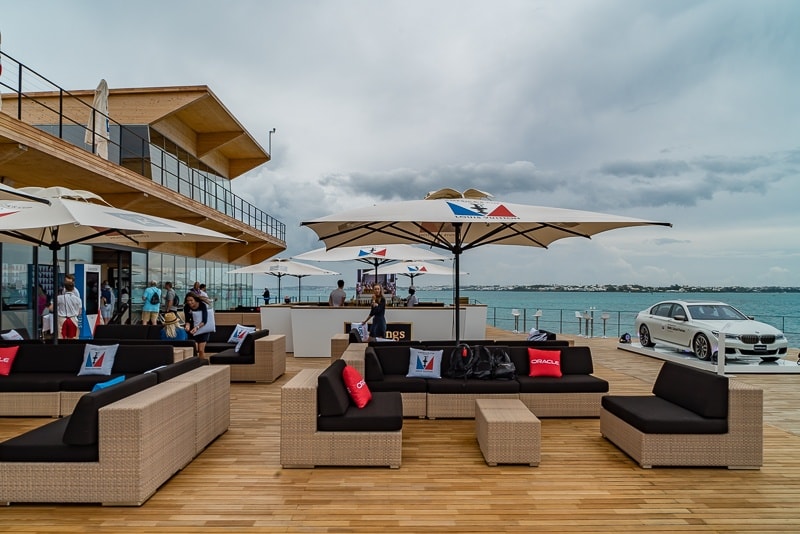 We now know the hard work that goes into winning not only by the sailors and team on board, but the dozens of people behind the scenes developing technology and implementing new designs.

Who knows where the innovation will take us another 136 years from now?

Congratulations to New Zealand for winning the 2017 America's Cup. We can't wait to see where it is and who will win next!

Read Next: What to do on Grand Cayman

WebsiteFacebook
You are Here: Home » Bermuda » Bermuda and a Superyacht Regatta – America’s Cup