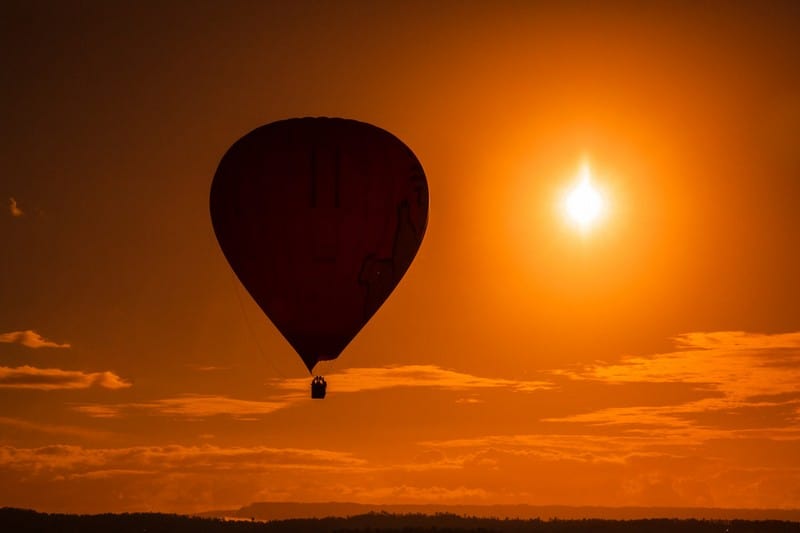 We have taken one other hot air balloon ride in our lives and that was a low altitude ride over the Masai Mara plains of Africa. It was incredible and I wasn't nervous at all. But in Australia's gold Coas we were hot air ballooning at another level. 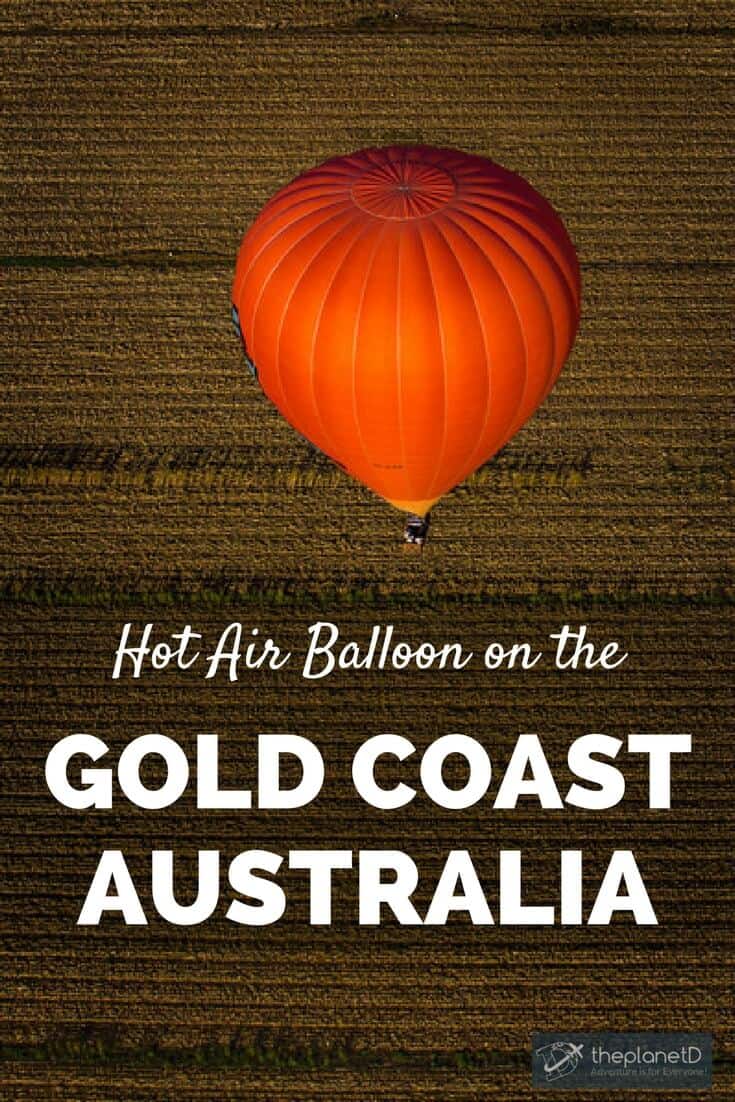 We're going how high today? I said to Dave after the pilot of our hot air balloon told us we'd be reaching an altitude of 3000 feet. That's 1 km in the air!

we'd be going way up, I started to feel my knees go weak. 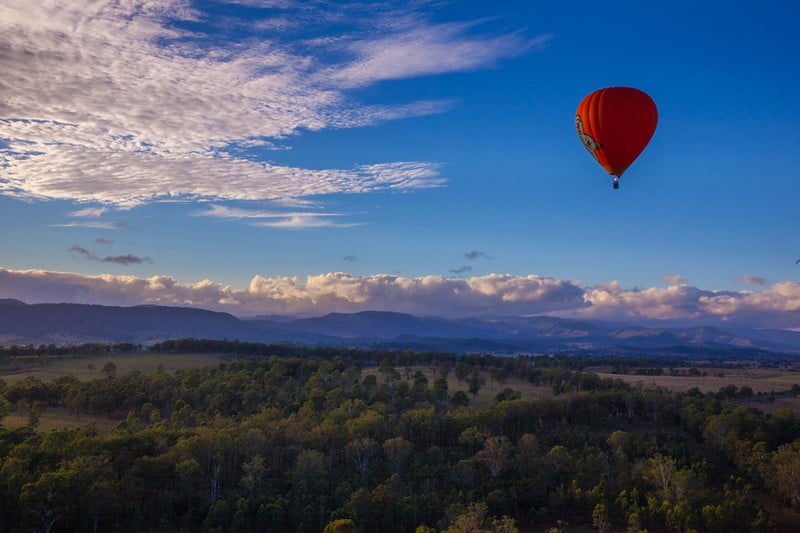 It was 4:30 am when our van picked us up at Peppers Broadbeach Resort on Australia's Gold Coast.

The rain was pouring down and we were sure our flight would be cancelled. We have attempted two other hot air balloon rides in the past that were cancelled due to inclement weather and we anticipated the same thing happening here.

During the drive I leaned over to Dave and said “They just picked us all up because they didn't want people to complain. There is no way we're flying in this weather.” 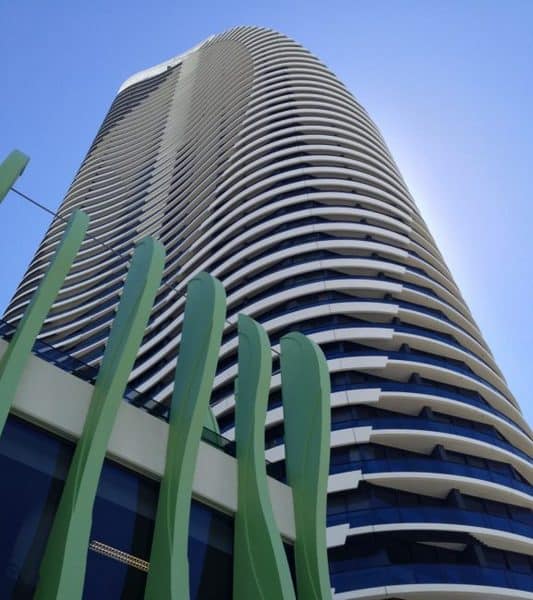 The stunning Peppers Hotel at Broadbeach

Hot Air Balloon away from the Coast

However, as we made our way farther inland to Canungra, the weather cleared and we were treated to a beautiful sunrise and things were looking good! 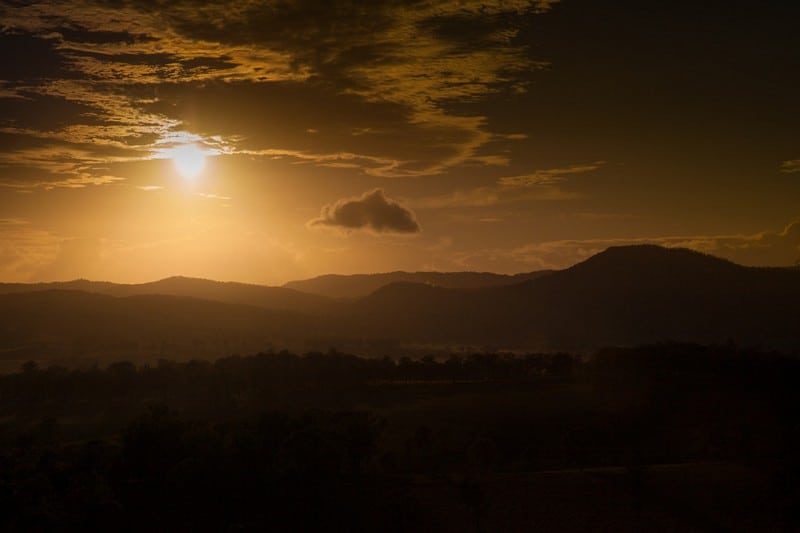 Sunrise from the balloon

We saw a smaller red balloon and a giant yellow balloon being inflated. For some reason, Dave wasn't thrilled about the huge yellow balloon. He said to me, “We're going to be put in that one, I just know it.” Sure enough, when they split up the group, we were on the  yellow one.

Check out 8 Great Things to do in Queensland Besides Surfing

When traveling with Dave I tend to get a bit frustrated. He is an amazing photographer, but often times the tour becomes about the photos rather than the experience.

He was armed with his two cameras ready to take pictures but because we were going on the larger balloon that holds more people, he was afraid that he was going to have heads in every shot.

I guess the guides took pity on his pouty face because even though we were standing at the front of the line, they left us for last when loading up and we lucked out with the corner of the basket giving Dave and unobstructed view of the horizon. 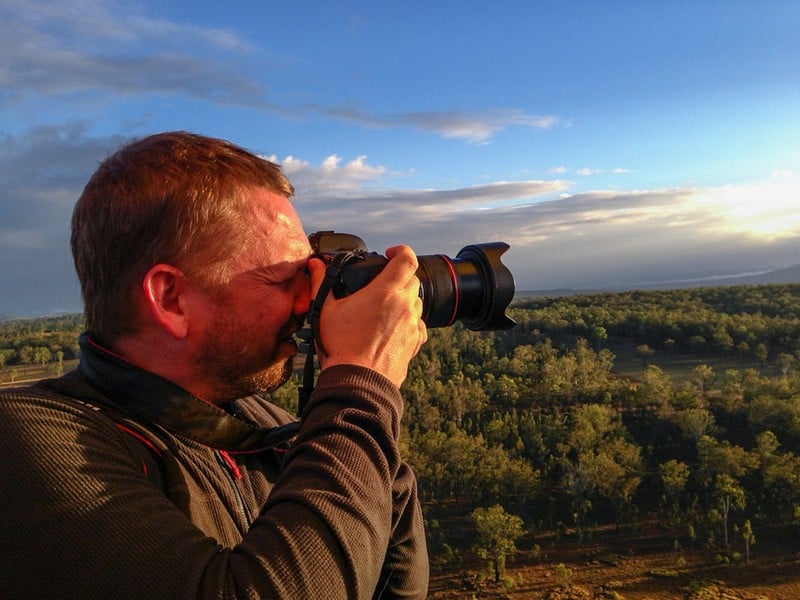 He was happy again!

As it turned out, the yellow balloon was amazing!

It's the largest balloon in all of Australia and there are only two that are larger in the world. That would be in Egypt and Turkey.

Our pilot had been flying all his life and he had the confidence to go higher and higher. When we reached 3000 feet, he said: “We're going to go to at least 4000 feet today”.

As the landscape below dropped far away, I felt a pang of anxiety. I know that a fall whether its from 4000 feet or 400 feet is going to do the same damage, but being up there with nothing but air around me, stressed me out.

Dave took photos like it was nothing while I clenched my grip to the basket pasting a smile on my face so nobody could see my anxiety. We drifted way up for a few minutes and then we lowered our elevation to see the kangaroos below. 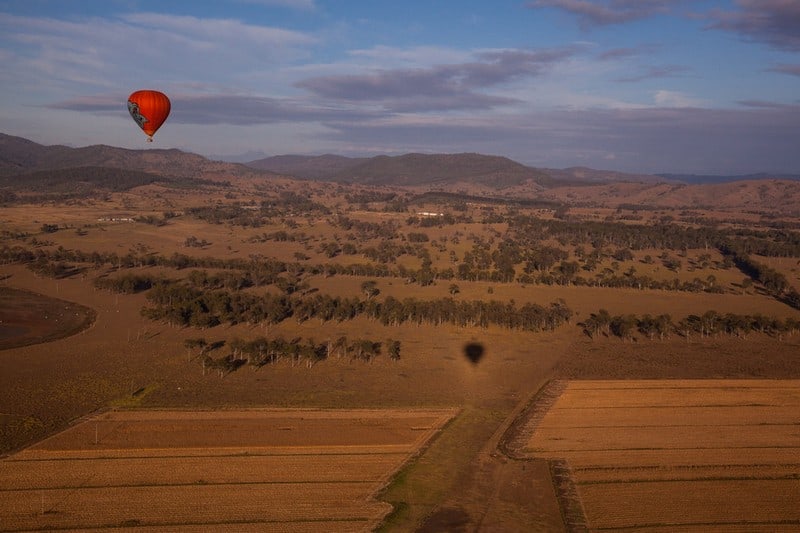 The landscape was epic on the Gold Coast in Queensland, Australia

It's amazing how much better I felt just being a couple thousand feet lower. Having a clear view of the ground made me comfortable and I could finally raise my camera again and take some video and photos. 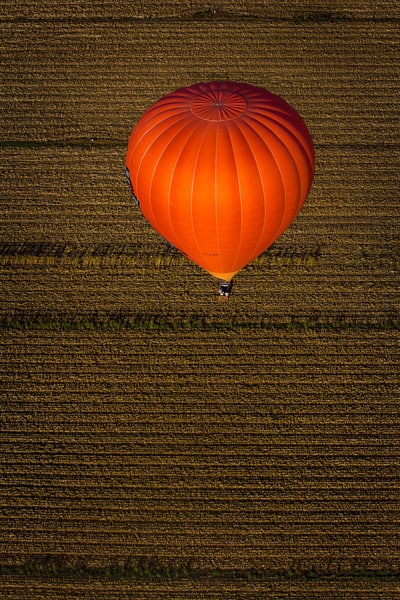 Flying high over the other balloon

We were still quite high though. We drifted over the other balloon and kept on flying as he landed his in a far off field.

Our flight was a half an hour, but time flies when you're flying high! It felt as if we were in the air about 10 or 15 minutes. Even though it went fast, we felt satisfied.

You don't need hours up in the sky in a hot air balloon. A half hour is more than enough time to enjoy the experience and to give you time to relax. By the time we landed, I was ready for breakfast. 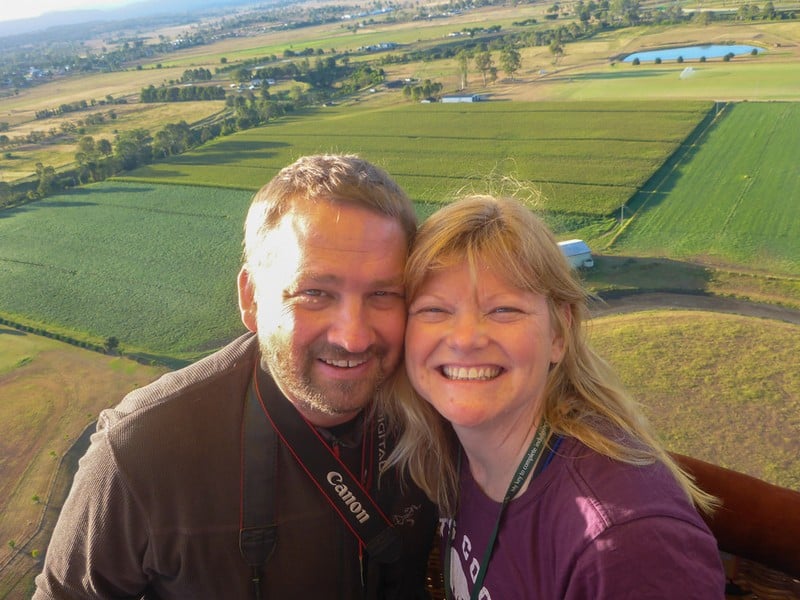 We enjoy the peacefulness of a hot air balloon Ride.

As the ground approached, our pilot told us to hold on, there could be a bump.

I have heard of people having huge bumpy landings during their flights, but both of our times in a hot air balloon have been smooth.

There is a little jolt once you hit the ground, but if the conditions are good and your pilot is experienced, I believe the landing isn't as painful as many believe. We braced ourselves for a tiny little hop and in a couple of seconds, we came to a stop. 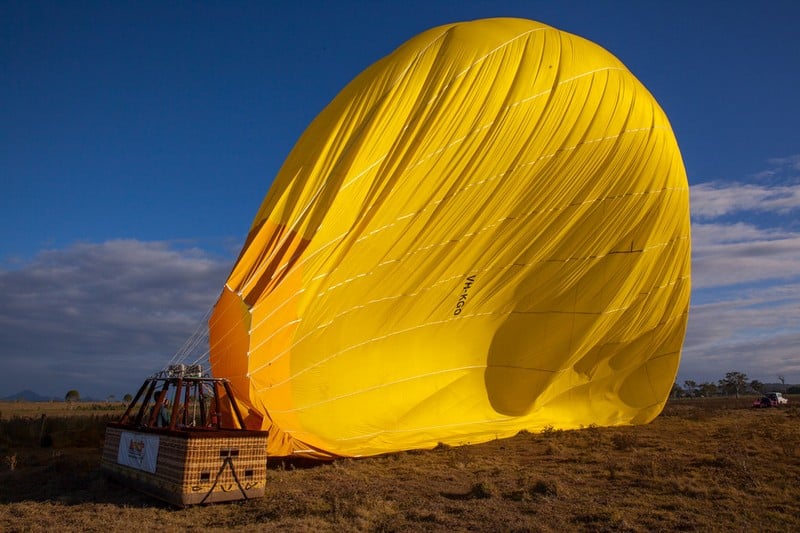 Once we were out of the basket, we helped the crew and pilot pack up the balloon.

It's a lot of work pushing the air out and folding the nylon in, but within about 10 minutes, we were packed up and taken for breakfast at a winery where we enjoyed a glass of champagne and a huge buffet.

The sun was shining, the air was warm and our bellies were full.

The perfect end to a perfect morning in the air

Ah, Queensland, how we love you and want to come back soon. If you get the chance to ride on a hot air balloon, anywhere, do it. It's a thrilling experience that you will never forget.

For information on hot air ballooning on the Gold Coast visit Hot Air. They have locations in Cairns, Brisbane and Port Douglas as well.
Our Trip to Queensland is brought to you by We were in Queensland as part of Room753 at Peppers Broadbeach in conjunction with Tourism and Events Queensland. Car Hire was provided by Vroom Vroom Vroom.