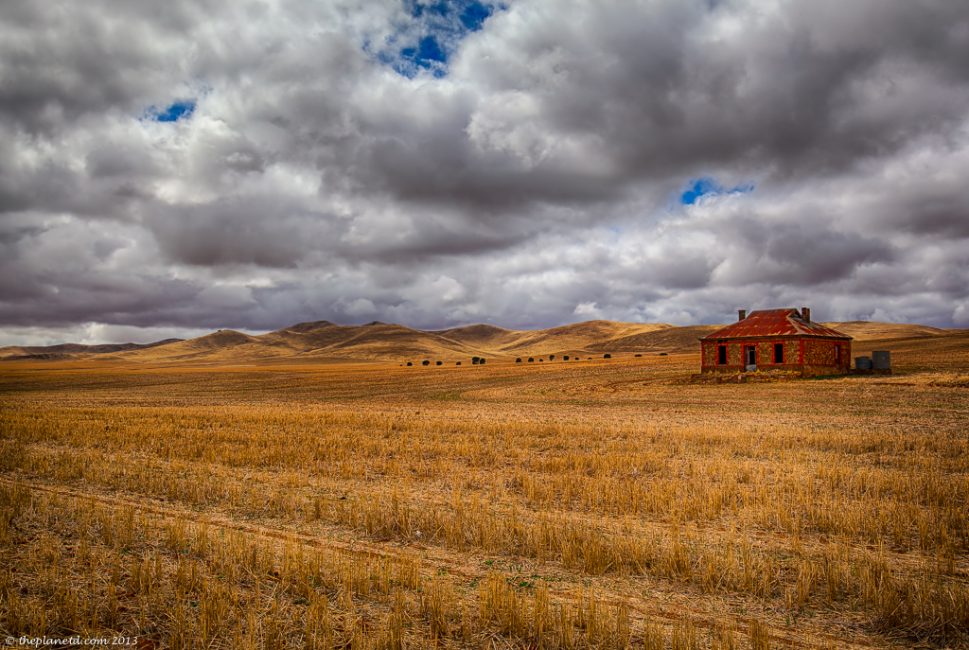 We made a point to take a detour from Wilpena Pound on our way back to Adelaide in South Australia to photograph the old Burra Homestead.

Made famous in the 80’s by Midnight Oil’s Album Diesel and Dust, (remember The Beds are Burning?) the Burra Homestead has turned into one of the top 100 must photograph destinations in all of Australia.

Burra Homestead – Is that the cover of a Midnight Oil Album?

Diesel and Dust was Midnight Oil’s biggest international album focusing on the struggle of the indigenous Australians and environmental issues. We were young when this album came out and didn’t listen to the lyrics, we only thought The Beds are Burning was a cool song.

I’m going to make a point of listening closely as it seems that there are still environmental and indigenous concerns in Australia. Has much changed since the 80’s? That I cannot answer as a Canadian looking in from the outside.

The Drive to Wilpena Pond

It’s a beautiful drive from Wilpena Pound no matter which route you take and if you are a photographer, by way of Burra is worth the stop. As we kept our eyes peeled while driving along the highway, we saw an old abandoned cottage sitting in a field. When we noticed another truck parked nearby taking photographs, we knew we were in the right place.

The setting is beautiful and the homestead takes you back in time. You can imagine sheep grazing in the fields surrounding the homestead that was once abuzz with sheep farmers manning the land.

At first glance, we wondered what all the fuss was about? It was a grey day and the building was in ruins. But then again, this is a famous cottage. Midnight Oil made Ken Duncan’s photograph a household name and this is the second best view in South Australia according to the Australian Traveller.

Besides, it may not be around for much longer, The Burra Homestead is in desperate need of repair and if the Burra community doesn’t come up with the 13,000 to fix the roof, there may be nothing left of this famous album cover locale, but the album cover itself.

You can’t get as close to this homestead these days as Ken Duncan could for the Midnight Oil Album Cover. There is a fence around the property with a no trespassing sign. But it still makes for a great photograph.

Note: The day was perfect for HDR photography. As Dave says “I use HDR whenever there are dramatic skies. It gives you a realistic view of what the eye sees. It shows the contrast between the foreground and the sky and picks up the texture in the clouds which would otherwise photograph flat. HDR brings out the drama of the sky while keeping the vibrance of the field and homestead as the focus. For more photographs from Dave, visit his photography section…and his portfolio.

23 of the Most Iconic Places to Visit in Australia