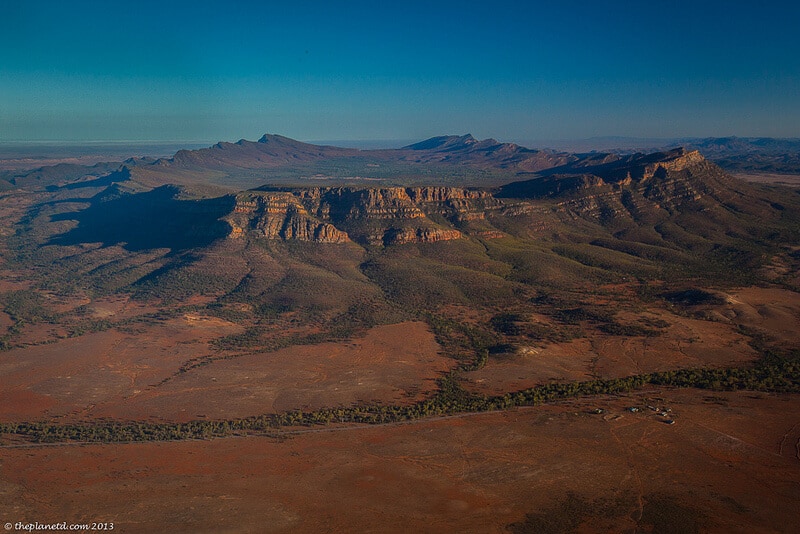 There is no better way to take in the beauty of Wilpena Pound than with a scenic flight from Flinder's Ranges.

They don't see a lot of rain in the Flinders Ranges Mountains of South Australia. But during our 429 km drive from Adelaide two days earlier, it poured rain all the way there.

All we heard from people at the park's office was how much they needed the rain, how there has been a drought and that the wet weather is very welcome.

I'm happy for the rain to help the eco-system, but couldn't it hold off until after we left?

As a matter a fact it did!

The rain stopped the next morning and we were free to explore the beautiful amphitheater of Wilpena Pound, an 80 Square kilometer circle of rock that is simply astounding.

What is the best way to see this incredible landscape? From above of course!

If there is one thing we love to do it is to take scenic flights.

There is no better way to take in the beauty and scope of a place than from a plane flying overhead.

We arrived at the Wilpena Pound Airport at dawn just as one lone plane was taking off. There was no one else in sight.

We had our own Ute hire so we waited in the warmth of the truck for the pilot and the rest of our party to arrive.

As we waited, we hoped and wondered if we were in the right place.

The airstrip is quite remote. It's not paved and there's no hanger or office.

There's a little shed and two planes parked in a gravel fenced in area.

Nobody arrived for quite some time, but eventually, two guys from Germany and another fellow from Sydney showed up to join us.

We felt much better knowing we must be in the right place.

The pilot showed up a short while later, stripped off the window covers, did a quick check of the plane, and then we all loaded in within a few minutes after being weighed and assigned seats.

Dave and I were placed in the back beside one another which was a bonus because we could photograph each other grinning through the flight.

It was a tight squeeze.

The plane only held six people and the two back seats were the most snug of them all.

I had to take a couple of deep breaths at the beginning because I felt a little claustrophobic as Dave's shoulder pressed against mine and I had nowhere to go.

All the anxiety was soon forgotten though once we took off.

The flight over Wilpena Pound was one of the smoothest scenic flights we've ever had.

The day was perfect, the sky was clear and there was zero turbulence. We had a bump free ride allowing us lots of time to take in the view below.

And wow! The scenery was some of the best we've ever seen!

Wilpena Pound has to be one of the coolest landscapes we've ever witnessed.

We heard a couple of conflicting reports and I wasn't able to figure it out even after checking for more details on the Internet.

Was it a meteor that caused this landscape or is it something known as a syncline, an occurrence that happens during a tectonic shift causing rocks to fold and shift?

As far as I can make out, it looks like the rock was folded up and then the valley was formed by erosion.

But it all seems too perfect to me when I look at the saddle like formation at the top of the page. I'm sticking with the meteor theory. (Call me crazy)

The Flinders Ranges are millions of years old and a walk through the Pound is just as interesting as the flight.

You can see the layers of eras stacked upon one another as the rocks tell a history of the earth. It's quite a fascinating destination.

But today, we're in the air and it's pure fun and beauty on our agenda.

Our pilot turned through the air giving each passenger enough time to see Wilpena Pound and the mountains of the Flinders Ranges.

Wilpena Pound may be the most impressive part of the Flinders Ranges, but the entire area is beautiful and not to be missed.

It's the quickest way to get the Outback experience in all of Australia. A few short hours from Adelaide takes you to an entirely different world.