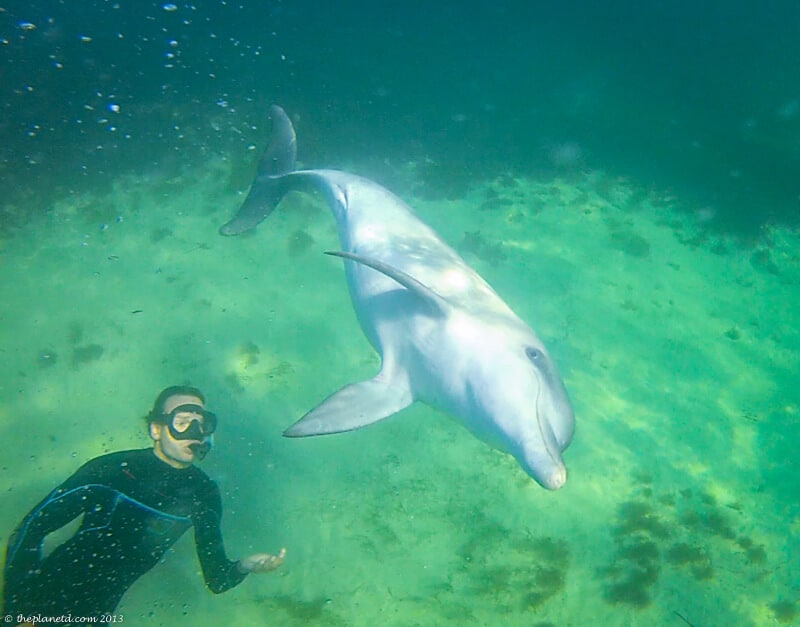 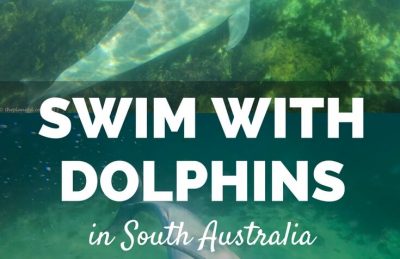 We arrived in Port Lincoln to take on some of our most adventurous activities in South Australia.

We may not have been pushing ourselves to the limits or huffing and puffing up any mountains, but it was here that we hopped into some of the most daring waters on earth.

Everyone always thinks of sharks when swimming in Australia, it’s the first thing that everyone mentions when you say you’re going in the water. Most people from Oz thought we were crazy to go in the sea here, but we had several excursions planned off the coast.

Our first trip took us to Baird Bay for an unforgettable wildlife experience.

We’ve swam with dolphins before and it is the most uplifting and beautiful experience on earth.

The only difference with swimming in Baird Bay, South Australia was that these waters were in shark territory and they were freezing!

When did we ask our captain what the temperature of the water was? He replied a chilly 16 degrees Celcius! For you Americans out there, that’s 60 degrees Fahrenheit.

When we spotted the dolphins and were told to jump in I wasn’t sure if I was more afraid of the cold or the possibility of becoming a lunch for a great white shark.

We had a quick briefing our swim where we were told stay close to our guide who was wearing a shark deterrent.

He wore an electronic pulse attached to his ankle that apparently scared sharks off. If we swam too far away we’d be prey.

However, the more we thought about it, the more it didn’t make sense to us.

If sharks and dolphins use the same sonar to navigate, how come it didn’t scare off the dolphins? It’s better not to think about these things so we just jumped in.

Each time we’ve swam with dolphins, it’s been reiterated that we must jump in as soon as the dolphins arrive.

They love to play, but they also have short attention spans and if you don’t act soon, you’ll miss your chance. So we did what we were told and jumped into the frigid waters.

It is said that if there are dolphins around, sharks will not bother you. That is a myth that has been debunked again and again. Dolphins and sharks do share the water and eat the same food but sharks are not terrified of dolphins.

They occupy the same space on a regular basis. What dolphins can do is defend themselves against sharks; even Great Whites, and when push comes to shove they can kill a shark while defending their young.

When it comes to the food chain in the ocean though, dolphins are up there as worthy opponents.

Hey, when we were swimming with dolphins in New Zealand, I saw a shark swim right underneath me.

It was big and it was curious, but thankfully nothing happened. Our captain didn’t believe me, but we’ve been up close and personal with enough sharks in our lives to know what they look like. He didn’t look afraid at all.

See video of us swimming with sharks.

Anyway, I’m here to tell the story, so clearly nothing happened… So, on to the dolphins.

As I said earlier, we’ve been lucky to have the opportunity to swim with wild dolphins on two occasions.

Once in Honduras and once in New Zealand and while they were amazing experiences, neither of these came close to the experience we had in Baird Bay, South Australia. We have never seen dolphins stick around for so long. They made pass after pass around us.

They dove and turned and jumped and sang in the water. You can hear their sonar while you are snorkelling.

Their eyes are so pure and innocent yet filled with intelligence. When you swim with dolphins, its as if they know your being to the core and can read your mind. I have heard that dolphins and whales can feel your heartbeat and when you are in the water with them, you believe it. You sense that they know exactly what you are thinking.

The more relaxed you are and the more you play with them the more they want to interact with you.

What I love about the experience in Baird Bay is that  it is completely wild. We’ve never swam with enclosed dolphins before and I don’t know if I’d ever want to.

Out here in the bay, it is completely left up to the dolphins if they want to play with you. If they don’t want to visit, you they’ll simply swim away or not show up at all.

Both our captain and guide told us that this was one of the best visits they’ve ever had and we believed them. We’ve never seen dolphins so interested in staying with humans before. They seemed to really enjoy our company and we enjoyed theirs too!

For more information on swimming with dolphins, check out BairdBay.com – Adult swims cost $140 (AUD). To view from the boat with no swim is $100 AUD.

Australian Dollar is currently on par with the US Dollar.