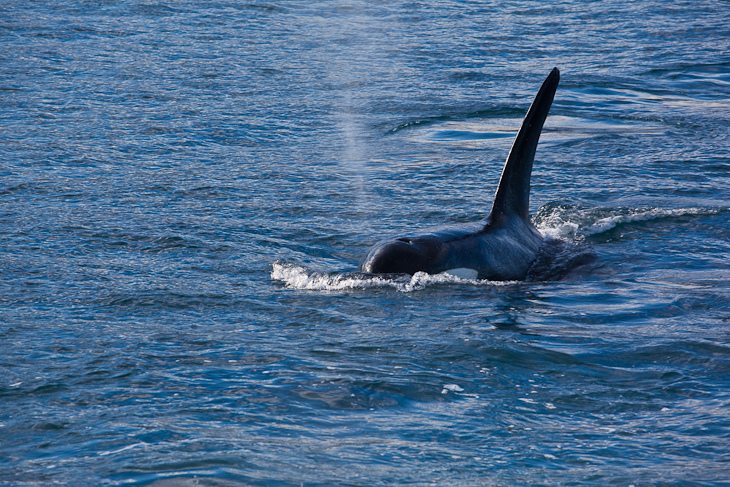 It is a glorious thing to see a whale in the wild.

We were the last tour of the day to go out with the aptly named Whale Watch Kaikoura in New Zealand.  Guess what we were on the hunt for? Oh Yeah, Whales.

There is an excellent chance that we will get to see whales in this part of New Zealand. So much so that if you don't see any whales on your trip, Whale Watch Kaikoura will refund 80% of your trip!

A Whale of a Time in Kaikoura 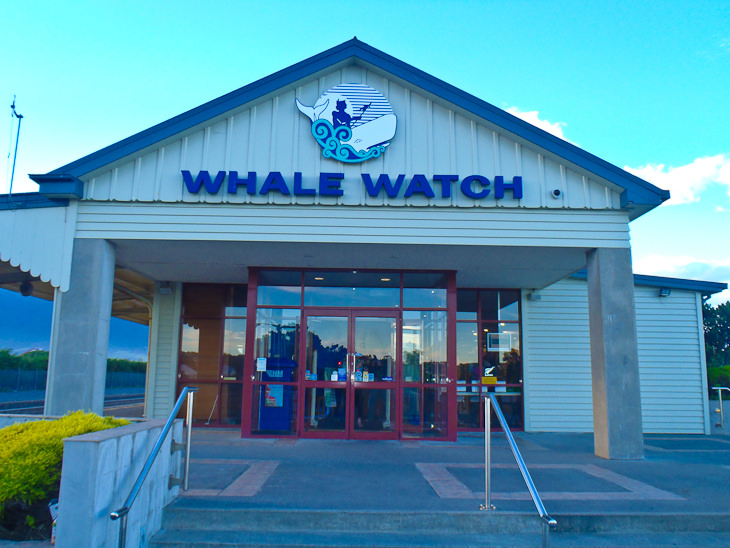 We had lady luck on our side today and it wasn't long until the captain and crew spotted a sperm whale in the distance.

It is a long journey out to sea and we had our guide tell us a little bit about the history of the company, the whales of the region and about what we could expect on our trip. For the first part of the tour, we all sat inside the boat as it plowed its way through the waves.

There are warnings to be prepared for sea sickness and let me tell you, it is a bumpy ride. We are not allowed out on deck until the captain gives us the okay.

Sleeping on the Boat

Dave and I didn't get seasick. Instead we were lulled to sleep by the rocking of the waves and the soothing sound of our guide's voice.

We both slept a total of 3 times on this Whale Watching Tour. We didn’t mean to keep falling asleep, but the boat was just so damn cozy. 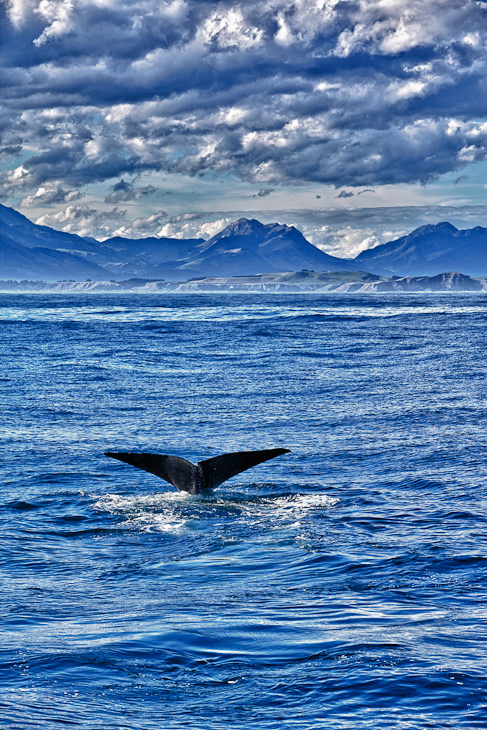 We were jolted out of our slumber when the boat stopped and there was an announcement that we have spotted a whale.

The whale dove once and we managed to snap a few shots of the tale breaching.  Our guide told us that they know the pattern of this whale well and there is a good chance that it will resurface soon.

She was right. The whale was back on the water within a few minutes… where it proceeded to fall asleep.

The waves were putting everyone to sleep this day my friends.

We watched it for a good 20 minutes while it slept. It is exciting to see a whale, but how long can you watch something that is just floating in the water doing nothing?

To make matters worse, they announced that a pod of Orcas was spotted by one of their captains that had the day off. 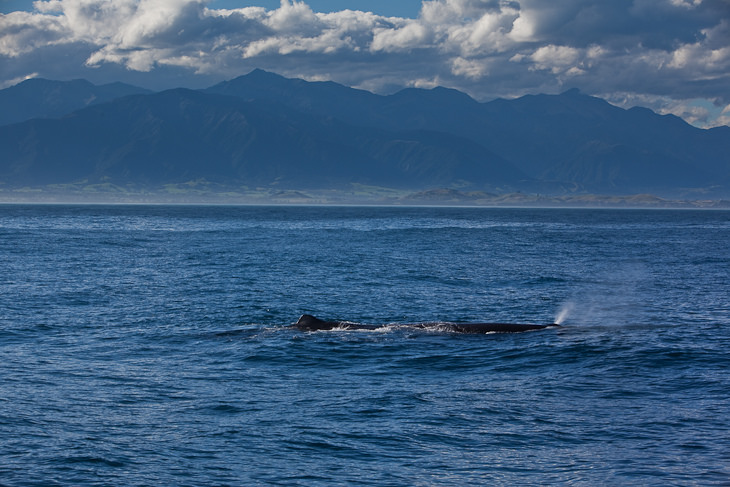 After a few more uneventful minutes, they finally made the announcement that we would go to see the Orcas (AKA Killer Whales)but don't hold your breath, they might be gone by the time we get there. 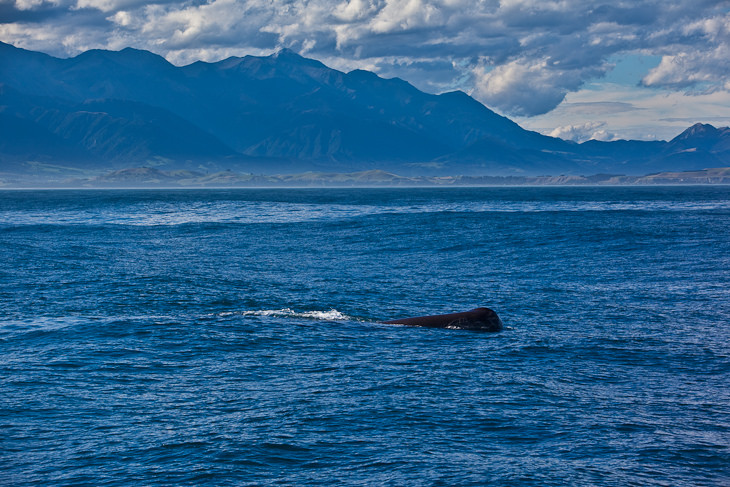 We did manage to catch the orcas before they moved on and it was a very exciting moment. Orcas are a part of the dolphin family and they behaved a lot like the bottlenose dolphins we had seen a few days earlier.

They played in the wake of the boat and surfaced regularly to check out what we were doing. These Orca Whales seemed to enjoy playing around the boat and had no intention of leaving. It looked as if they had come by to say hello.

We finally made it to see the Orcas!

End of the Tour

But alas, we only had a few minutes before the captain announced that we had to go. The crew had been working since this morning and we were their last trip. They had to get back.

If only they would have left to see the Orcas when they got the word over the radio in the first place.  We could have had more than a fleeting glimpse of them.

Yes, it was exciting to see the whales and yes they did what was promised. We saw whales and the job was done. But I do think that the tour could be longer.

For us, because we were either the final tour of the day or because they were running late, we didn't get the full amount of time on the water that they specified. Whale Watch Kaikura states that we will have 2 1/2 hours on the water. Our tour didn't make it to the two hour mark. 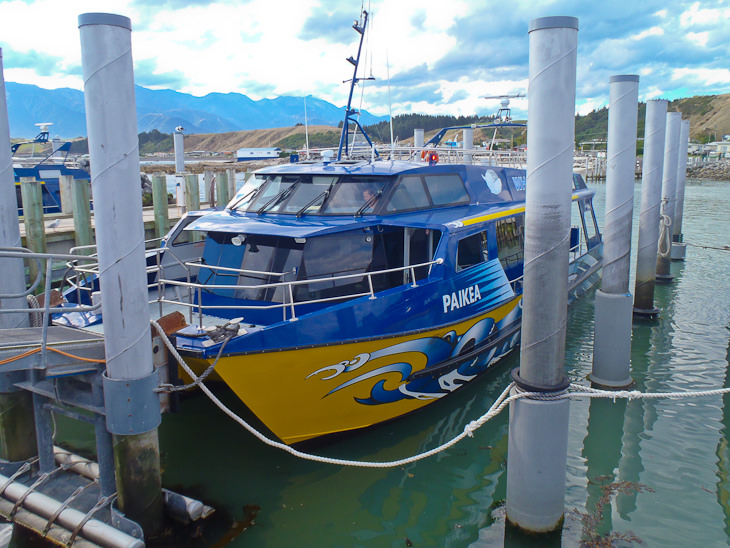 Thoughts on the Tour

There is a lot of ground to be covered and we understand the long journey to get out to the deep waters where the whales migrate. So therefore, it should be 2 ½ to 3 hours rather than 1 ½ to 2 hours.

We were a little bummed when we got back to the shop and everything was closed. We had planned on buying a stuffed whale and penguin for our friend’s kids in Christchurch but we couldn’t.

I think that they should keep the shop open for people on the final tour of the day.

But hey, we got to see some whales and that is something pretty special.

Find out more on Tours around New Zealand with The Flying Kiwi.

WebsiteFacebook
You are Here: Home » Oceania » New Zealand » A Whale of a Time in Kaikoura