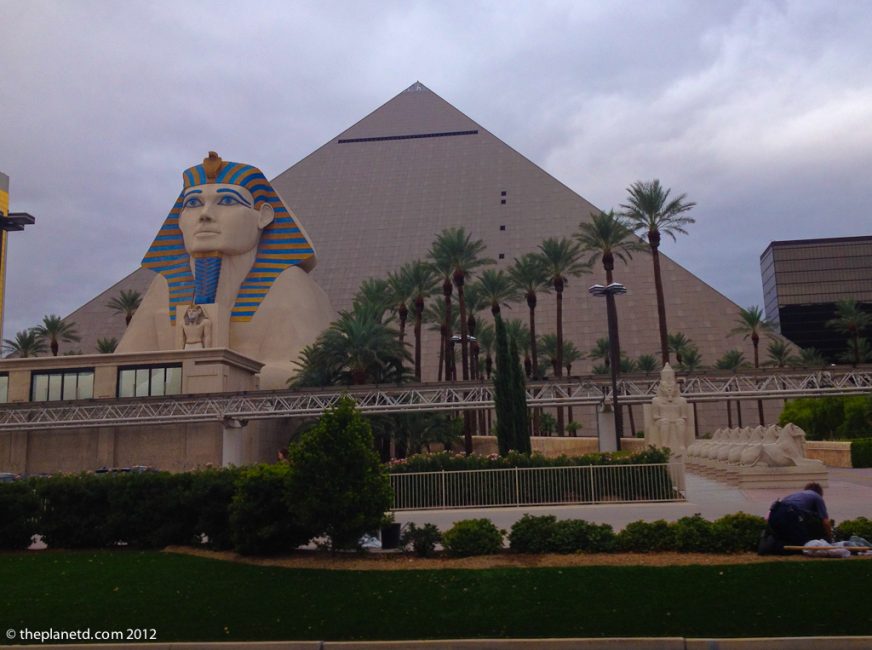 When we saw that Vegas was a part of our Road trip itinerary, we weren’t exactly jumping for joy.

So we were surprised to feel the excitement build as we approached Sin City from Death Valley.

We didn’t go crazy like the guys from the Hangover and we didn’t party like it was 1999. But we still had a ton of fun.

I can’t say that our two days in Vegas were very productive but we did notice a thing or two while we were there. Like how you can take an around the world tour in just a few blocks.

Vegas Around the World

We’ve had the honor of visiting most of the landmarks of Vegas in real life so we thought it would be fun to do a comparison photo post on Vegas Vs the World.

We noticed that Vegas really does have a love affair with the rest of the world and instead of looking at it as being kitschy, we look at is a an homage to the greatest places on earth.

We were in Rome for the first time in 2014 and it is one of the most impressive cities on the planet.

It’s ancient and filled with history while its inhabitants are chic and progressive.

The Trevi Fountain, Colosseum, and the Roman Forum are intertwined throughout everyday life in the city and each turn takes you to yet another historical monument.

In Vegas, you will see all the monuments of Rome.

The Trevi Fountain sits in front of a restaurant and Ricky Martin can be seen strolling through the halls of the Roman Forum.

While Vegas-style spectacles play at the Colosseum instead of gladiators fighting to the death.

In Vegas all the structures are almost as massive they are in Rome.

I mean, Caesars Palace goes on forever and it recreates almost every major sight that you will see in the real Rome.

However, I’m pretty sure that Ceasar would give Celine Dion a “thumbs down” for her performance at the Colosseum.

One thing is for sure though, Caesar would definitely love the excess of Vegas.

As we were walking through the city, Dave said to me “This is how the Romans would have built Vegas.”

So we give Caesars Palace a thumbs up. It’s the Roman Empire of the 21st Century.

As we walked further down the strip, we came upon the Venetian.

We had heard that there were gondolas in the Venetian so we had to find them.

They weren’t difficult to spot, they’re right out front, just to the left the Rialto Bridge, only this Rialto Bridge has moving sidewalks!

The gondoliers had the same striped shirts as Venice and you can even eat dinner on the Grand Canal – just like Venice.

There are Italian restaurants and wine flowing and even a painted blue sky overhead the climate-controlled environment.

It’s very refreshing. And you know what else? The Venetian is almost as crowded as Venice. Verdict…The Venetian gets a thumbs up as well.

The Pyramids of Egypt are astounding. To see them for the first time takes your breath away.

The Sphinx stands guard in front of the three pyramids of Giza looking over the Sahara Desert.

It is a dream come true to see the great monuments of Egypt.

When you see the pyramid and Sphinx in front of the Luxor it doesn’t exactly take your breath away, but their Sphinx does have a proper face and it’s very colourful and pretty.

The pyramid itself is quite large too.

If King Tut were alive today, he may not be proud of the recreation of his homeland. The pyramids were a sacred place of burial and worship. But I’m sure he’d be having a ball with the other high rollers in the VIP Rooms.

I can just picture him and Ramses sitting at the poker table betting their fine gold and jewels.

Verdict – Thumbs up. The royals have always been over the top and if ancient Egypt rulers were alive today, they’d be playing in Vegas.

Like tombs similar to the Pyramids? Check out our tour of the Catacombs of Paris

During our first visit to New York City we were blown away by it. And each time we’ve visited since, it just keeps getting better and better.

Everything about NYC lived up to the hype. It truly is one of the greatest cities in the world.

We loved checking out all the monumental sights that we had seen in the movies and on TV and we could go back again and again.

If we had all the money in the world, we’d choose to live in New York.

Well, in Vegas they have their very own New York City as well.

You can marvel at the replicas of the Statue of Liberty and the Brooklyn Bridge.

You can even witness the New York Skyline.

The New York, New York Hotel in Vegas wasn’t as exciting as New York City itself, but it does have a roller coaster zipping through the buildings.

If you want a thrill, you can take a ride on the roller coaster, go for a drink at the Bar at Times Square and then party all night long.

Verdict – Thumbs up for a fabulous external recreation.

While walking through both cities, the Eiffel Tower is the centre of attention and when lit up, they are both beautiful. However, the one in Vegas offers a thrill ride and dinner at the top.

Why go to Paris when you can do it all here? Okay, that’s an overstatement, but you have to admit Vegas captured the look of Paris quite well.

See the real Paris in our Paris at Night Photo Story. As for the feeling of being in Paris, well that’s another story.

The Arc de Triomphe is impressive at both Vegas and Paris, except in Vegas you get to look at Gordon Ramsay’s face.

I think Gordon Ramsay took things a little too far, but then again, this is coming from a guy who has an out of this world ego.

He couldn’t give one hoot to my opinion.

Verdict – We’re Sitting on the fence. I love my Paris and Gordon Ramsay should not be on the Arc.

Vegas is a spectacle.

You will get a taste of the places on display around the world in Vegas.

The architects did a wonderful job replicating all of the monuments, and you have to give them credit for putting together a city that truly amazes.

Even the statue of David can be seen at Caesar’s Palace. While David is located in Florence, not Rome in real life. It is still impressive to see Michelangelo’s masterpiece on display.

You really can see it all tere!

Vegas doesn’t inspire awe and wonder that one gets from visiting all of the above cities around the world.

But it does excite the senses and it is worth seeing once.

Just make sure you don’t lose all your hard-earned money while visiting.

We’ll stick to visiting the world, but it was cool to stop at this little city in the heart of the Nevada Dessert.

Discovering Egypt: A Photo Story
12 Amazing Ruins of the World: A Visual Memory
The World in Black and White: A Photostory
It’s A New York City Christmas
6 Tips to Make the Most of your New York City Photography