Montreux and its Musical Legacy

Music plays a huge part in our lives and our travels. Montreux has a vast musical history and a famous music festival to celebrate. There is even a Freddie Mercury (frontman of the band Queen) statue commemorating his death.

He chose Montreux as his hideaway to live out his final days. Smoke on the Water was inspired by the Casino burning down in Montreux and Montreux hosts one of the largest music festivals on earth.

Whenever we enter a new country, some song or artist always springs to mind about the location we’re visiting. Smoke on the Water was the song that sprang to mind when visiting Montreux Switzerland.

Smoke on the Water- Montreux

It was the first song I ever learned on the guitar. One Christmas I was given an acoustic guitar as a gift and I remember my brother Jim putting it on his lap. He played four notes.

A four-note blues scale that goes down in the history of music as one of the most memorable guitar riffs of all time. It is the opening of the song Smoke on the Water.

Montreux Casino – Burning Down in 1971

Deep Purple’s “Smoke on the Water” tells of the events of the Montreux Casino burning down in 1971. It was during a Frank Zappa concert when a fan-shot a flare gun at the stage. Deep Purple was recording an album at a mobile studio attached to the Casino which just happened to be owned by the Rolling Stones.

As Deep Purple watched the blaze from their hotel room, they noticed smoke spreading out over the waters of Lake Geneva. And the rest is history

When it came to Montreux, we knew that Montreux had one of the most beautiful waterfront walks in Europe along Lake Geneva.

We knew that Montreux was an excellent location to base ourselves to explore the terraced vineyards of Lavaux or to hop over to the Medieval town of Gruyere. What we didn’t know was that it had such a colourful history in music.

Montreux has a long musical history and today it hosts the Montreux World Music Festival. The second-largest annual festival in the world second only to the Montreal Jazz Festival. (who knew?)

Artists such as Miles Davis, Santana, Eric Clapton, and Stevie Ray Vaughan have performed at the festival, but what we’re here to talk about is Rock and Roll!

Years ago, I remember watching a biography on Freddie Mercury where it said that he spent much of his final days in Switzerland. Little did I know it was Montreux.

I can understand why Mercury chose this location on Lake Geneva. It is magical.

“Under Pressure” was Recorded in Montreux

It was in 1978 when Queen bought the legendary Mountain Studios and recorded such iconic songs as Under Pressure with David Bowie. Queen also recorded The Show Mut Go On from Innuendo; The last album released while Freddie was alive.

Their final album Made in Heaven, featuring Mercury was also recorded and mixed in 1993, two years after his untimely death. There is an iconic statue on the promenade paying homage to Mercury as he strikes a pose over Lake Geneva. It is this vision that comes to mind whenever we picture him singing.

A true performer and front man, nobody could compare to his presence and power on stage and to this day, I can’t think of anyone who comes close.

The Plaque on the statue states “He appreciated the kindness and the discretion of the townspeople and Montreaux became a haven for him. His second home and setting for his final work”

Our Freddie pilgrimage had started before our trip to Montreaux. In 2008 after our climb to the summit of Mount Kilimanjaro, we flew to Zanzibar to relax on it’s sandy white beaches while being captivated by its turquoise waters.

Freddie Mercury was born on the island and we made a point to visit a few of his old haunts listed in our guidebook. The most notable stop was the Freddie Mercury bar. After three months in Africa, there was nothing better than walking into a waterfront bar, sipping a cold beer and listening to one of our favourite rock bands of all time.

Montreux is beautiful. Staying at the Grand Hotel Suisse Majestic was like staying in a palace. Overlooking Lake Geneva, we really got a feel of what it was like for the many rock stars and celebrities that chose this town for their own inspiration.

When we look back we’ll always think about the important role that Montreux has played in Music history and continues to do so.

The Montreux Music Festival is held annually in early July. 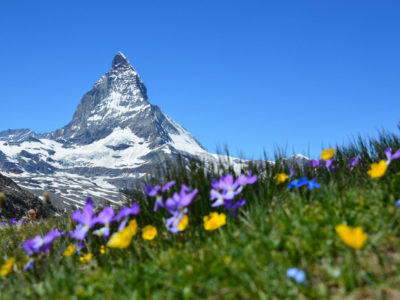 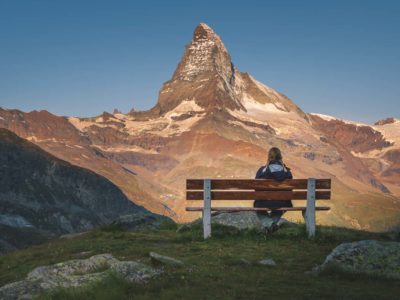 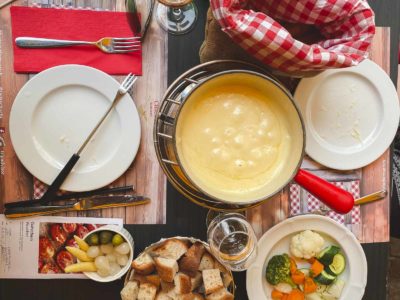 10 thoughts on “Montreux and its Musical Legacy”