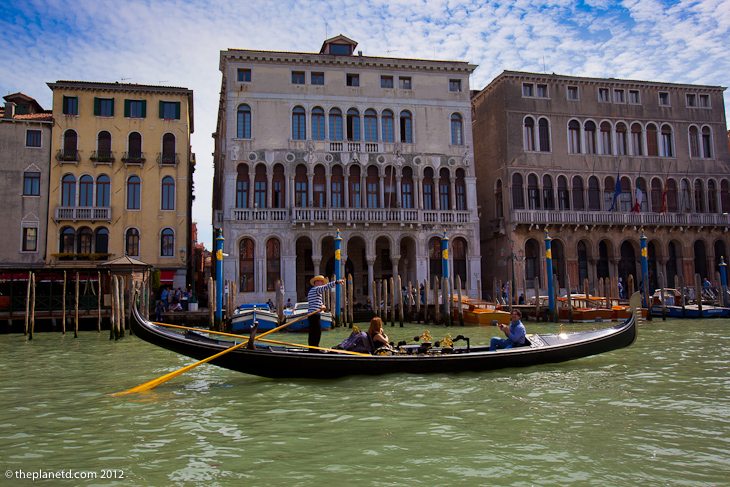 Venice is meant to be seen by boat. That is what our guide Jennifer said to us while we waited at the pier for our private tour of Venice.

We were taking a tour of one of the most romantic city’s on earth by water taxi in a sleek and classic white boat where we lounged under the sun in the lap of luxury.

Jennifer was our guide to everything Venice and she is definitely an expert.

We met Jennifer by the pier at the Piazza San Marco on the Grand Canal where we caught our boat for a two hour tour with her around town.

This Aussie native moved here from London 30 years ago, met her husband a half after landing and has stayed every since.

Elegant and chic she is exactly what we expected a resident of Venice to be. It really is one of the most sophisticated cities in the world.

Changing our Perception of Venice

We had already been in Venice for a day and weren’t overly blown away by this world-famous city.

However, all that changed the minute we stepped onto our boat for an alternate tour of the city.

Jennifer’s love for the city was contagious and as we learned more about this historical destination, we fell in love with it as well.

Once on the boat and away from the hustle and bustle of the square, we could see why people have been lured to the city of love for centuries.

An inspiration for many artists and musicians such as Vivaldi, Giovanni Bellini and Monteverdi, Venice is truly a work of art.

Great thought went into each façade as families competed to have the most opulent home on the waterways. Venetians were a proud people who made their money from trading and commerce.

They weren’t born into aristocracy and appreciated every penny that they made. And made money they did.

Strategically located at the head of the Adriatic Sea, Venice was once a great empire that controlled the trading route between the west and the east.

Their need to impress was our gain as we are now blessed with viewing a living and working art gallery. To float through Venice is to float through historic beauty.

This private VIP tour with Walks of Italy includes two glorious hours of sightseeing and exploring the canals of Venice. We immediately detoured off the Grand Canal to a waterway leading under the Bridge of Sighs.

This is a famous sight in Venice as the Bridge of Sighs connects the interrogation rooms of Doges Palace with the old Prison.

Convicted criminals took their final walk over this bridge and had their final view of Venice before serving their long and brutal sentences. And so, with a final sigh, they were sent to face their fate.

We checked out many historical buildings and Jennifer referenced classic literature as we snapped our vacation photos at places like the Rialto Bridge, the Cemetery of San Michele, the Madonna dell’Orto Church and St Marks Basilica.

When she pointed out the balcony where Johnny Depp and Angelina Jolie shared a kiss in the Tourist and the building that James Bond blew up in Casino Royal we could finally honesty admit that we understood what she was talking about.

We learned that Gondoliers uniforms were changed after the film Summertime with Katherine Hepburn put them in striped shirts with corn hats.

It’s the spot where postcards are made and as the bells rang, we looked out and admired our 360? view of all the islands surrounding the city.

What an end to a perfect day on the water in Venice.

We started the tour as an adventure couple who didn’t think much of Venice and ended it with a new love and respect for one of the most unique cities on earth.

For more information on your own City Tour of Venice or other Walking Tours of Italy check out Walks of Italy.