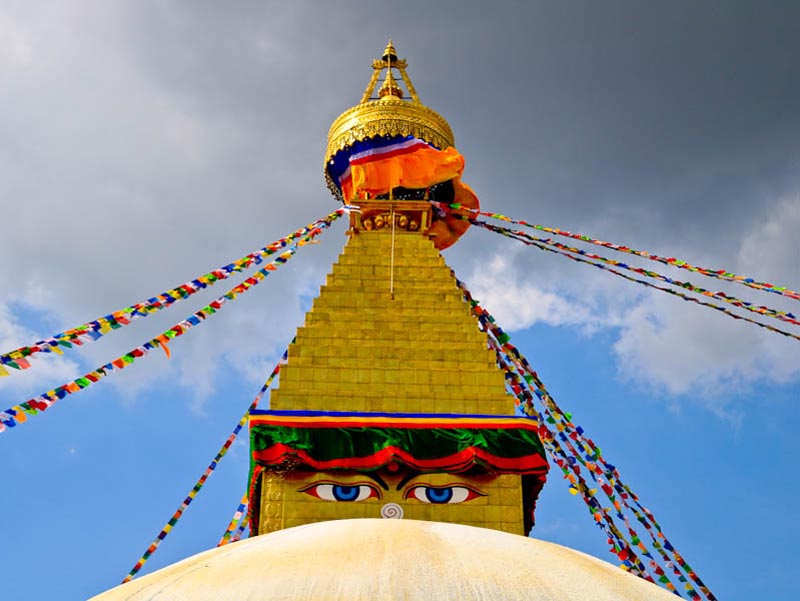 Most people use Kathmandu as a quick jumping off point for a trek to the Himalayas, but it’s worth spending a few days exploring this Nepalese City.

Parnashree Devi of My Travel Diary shares her picks for the top places to visit in Kathmandu before or after your trek.

The very first impression of Kathmandu was that of a very densely populated city with a gorgeous Himalayan backdrop.

The capital city of Nepal was my gateway to this Himalayan country that flaunts the mighty Mount Everest.

Often referred to as the paradise for mountain trekkers, Nepal has a plethora of things to offer to the tourists.

The tagline “Once is not enough” by the Nepal Tourism Board makes perfect sense as you can’t absorb everything on your first visit.

Nepal is more than high peaks and Sherpas and you can easily see that when exploring Kathmandu.

More to Kathmandu than the Crowds of Backpackers

If I talk about Kathmandu, the city is crowded and chaotic yet charming. The confusing narrow lanes of Thamel, rickshaws making their way through the streets and the strong smell of street food can be overwhelming.

But the cultural magnitude of Nepal is a celebration of the age-old cultures and their rich traditions.

This country is one of the most fascinating countries I have ever traveled to.

With medieval temples, the heritage of Durbar square and the breathtaking view of the valleys surrounded by the rolling hills, Kathmandu offers everything to give you a taste and feel for this Hindu country.

So why not begin your expedition to this amazing land by exploring the country’s capital, Kathmandu.

Chances are you are going to Kathmandu to begin a trek into the mountains.

We used SimRik Real Nepal Treks to climb to Mount Everest Base Camp.

It is owned and operated by Nepal native Dipendra Simkhada who has decades of experience in the Himalayan Mountains.

If you are looking to book a trek in Nepal, Tibet or Bhutan, he is the man for you!

Thamel is the oldest part of the capital city. It was also known as Tabitha Bahal.

This haphazard commercial hub is a must-visit. It is one of the busiest neighborhoods in Kathmandu city.

Here you’ll find everything from, mountain gear to prepare for your trek at bargain prices. If you don’t have it, someone is bound to sell it.

There are antique shops, bookstores and clothing stores.

It also offers a variety of restaurant and cafés, and there is a mix of different hotels and hostels.

If you are in Thamel, don’t miss sampling the delicious street food.

One of the top places to visit in Kathmandu is the famous Boudhanath Stupa.

Built in the 14th century, the Boudhanath Stupa is the largest Buddhist stupa in Nepal and is considered one of the most sacred places for Buddhists.

The giant Buddha eyes on the top of the stupa and the colorful prayer flags make it one eye-arresting frame.

The stupa was hit by the earthquake in 2015 but was later restored and opened to visitors just eighteen months after the earthquake.

Most commonly known as the monkey temple, the Swayambhunath temple is one of the major landmarks of Kathmandu city.

Located on a hilltop, this holy shrine flaunts an imposing white stupa with  fascinating Buddha eyes and a shimmering golden spire.

One of the most popular sites in the city, the Swayambhunath temple also offers breathtaking views of the Kathmandu valley.

The name “Swayambhu”, means “Self-Created” and legend says the religious site came into existence more than 2,000 years ago when the valley was created out of a primeval lake.

The hanging colorful prayer flags over the stupas make for an absolutely stunning sight.

The Kathmandu Durbar Square is a prominent landmark of the city.

The heart of the old town, the Durbar square was once the place where the King was crowned and v The King’s palace is right there, from where he used to rule the country.

Also known as Hanuman Dhoka, this UNESCO World Heritage Site, used to be a bustling place filled with the locals and tourists.

The Pagoda styled temples and palace, dating back to the period from 15th to 18th Century, were badly hit by the devastating earthquake in 2015.

My heart sank seeing the tilted roofs and cracked palace in the Durbar Square of Kathmandu.

If you are in Kathmandu, a visit to Pashupati temple is a must. It is one of the most sacred places for Hindu devotees.

This temple complex located on the banks of the Bagmati River, is the largest in Nepal.

It was built in the 5th century and later renovated by the Malla Kings. The main temple in the complex is dedicated to Lord Shiva and is restricted to Hindus only.

If you ever visit the complex, you can also see the cremation ceremonies of Hindus on raised platforms along the river which I found quite disturbing.

Don’t get fooled by those painted saints (Sadhus) in the temple complex who demand money if you wish to take a photo of them. Either be prepared to pay or don’t take their photo.

If there is any place that swept me off my feet in Kathmandu, it has to be Patan.

Located 5 km south of the capital city in the Kathmandu valley, Patan is traditionally known as Lalitpur (City Of Beauty).

The locals also call Patan by its Newari name, Yala.

Patan is apparently the oldest town in the valley, flaunting the finest collection of temples, palaces and monuments.

The intricate details of the Newari Architectures, the large courtyard of the palace, the wood, and stone carvings in the temples are simply jaw-dropping.

Patan (the city of Lalitpur) is surrounded by four stupas which were built by Emperor Ashoka. Durbar Square is a lively place buzzing with locals and tourists all the time.

A visit to Patan is absolutely mandatory for first time visitors. It is nothing less than an architectural treasure

Have you ever been to Nepal ? If yes, share your fascinating tales with me

And there are my top 6 places to visit in Kathmandu.

If you find yourself in Nepal, be sure to give the city more than just a couple of days to prepare for your trek. Instead, enjoy the culture, local people and beautiful scenery.

Have you been to Kathmandu? What must stop places do you suggest people visit when traveling to Nepal?

Parnashree Devi is a travel writer, photographer, and a passionate filmmaker.

The infinite passion to share her travel stories led her to foray into the world of blogging and the existence of ‘My Travel Diary’. Being a globetrotter, she has been travelling to different destinations on various press trips by some of the prestigious Tourism Boards and Top End Luxury Properties across the world.

She has also been associated with leading Brands for social media campaigns and collaborations.

She loves meeting new people on her journeys. If she is not travelling, she loves watching travel shows and romantic world movies.

Sherpas of Mount Everest a PhotoStory