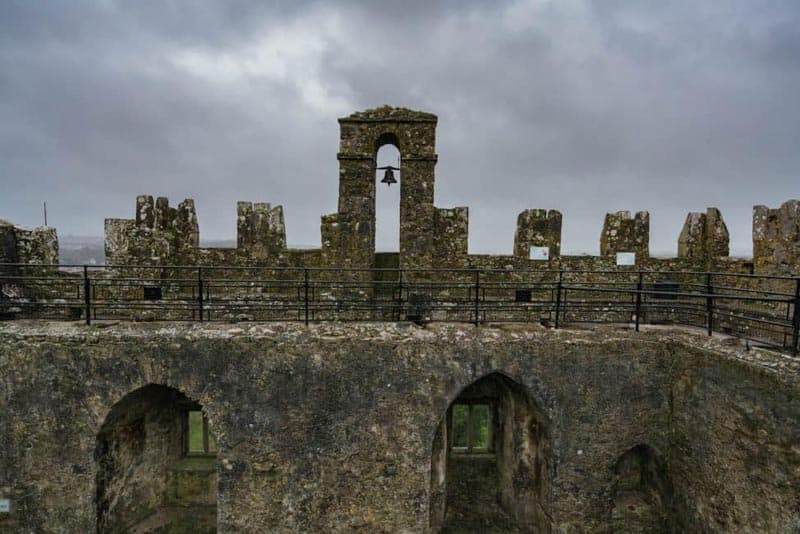 It’s a rite of passage when visiting Ireland to Kiss the Blarney Stone in Ireland.

It took us four visits for us to finally make it to Blarney Castle located just outside of Ireland’s second largest city, Cork. But we made it and were thrilled to finally be kissing the Blarney Stone! 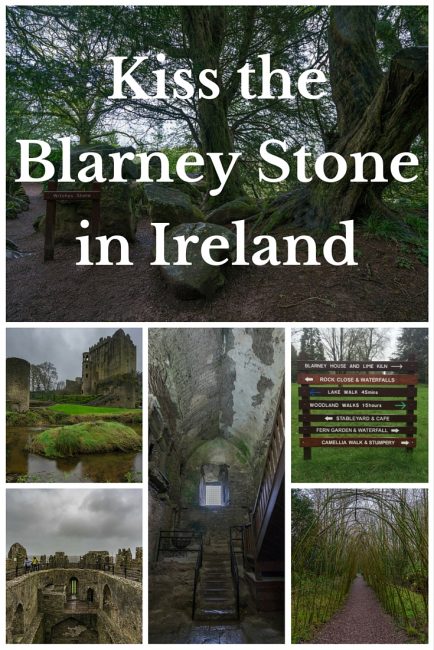 Kiss the Blarney Stone for the Gift of the Gab

We had wanted to kiss the Blarney Stone forever, but itineraries and schedules never let us make a detour to try our luck at the gift of the gab.

But during this past trip to the Emerald Isle,  we made sure not to miss it.

When we arrived at Blarney Castle, we expected to walk up to the stone, kiss it and move on.

But there is so much more to Blarney Castle than just kissing the Blarney Stone, make sure to give yourself a few hours to explore the grounds as well.

You may also like: The Best Things to do in Northern Ireland 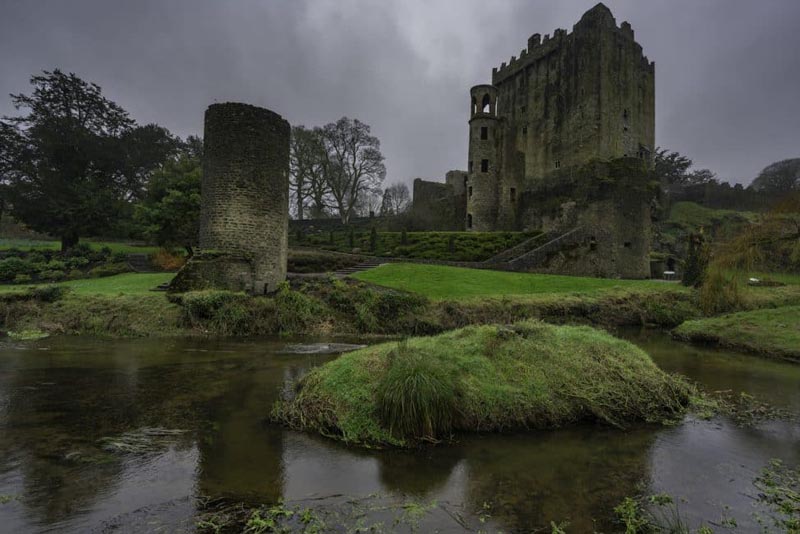 Interested in Kissing The Blarney Stone? Check out our Ireland Travel Guide for more things to do in Ireland

Blarney Castle is one of those magical castles that take your breath away when you first enter.

We’ve seen a lot of castles in our travels, but something about Blarney is special.

The moment you witness the view, you can feel the magic in the air. It’s in excellent condition standing proudly over picturesque parklands spanning 60 acres.

Built six centuries ago, the Blarney Castle is family owned and operated.

Built in 1446 the third of three castles standing on this site was built by Dermot McCarthy, King of Munster and has been standing ever since and kept running by his descendants who still live on the grounds today. 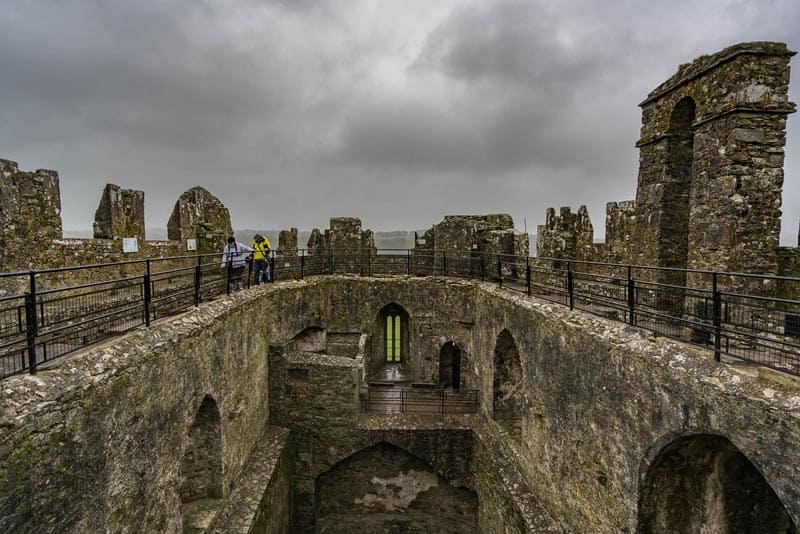 Looking over at the Blarney Stone

How the Blarney Stone Came to Be

The Blarney Stone came to be when Robert the Bruce of Scotland (we all remember him from Braveheart) won a famous victory over England’s Edward II at Bannockburn.

The MacCarthys provided 5,000 infantry to help him in this triumph and as a reward for their help, Bruce gave them a piece of the Stone of Destiny, the stone on which the Kings of Scotland were crowned.

Many Legends of the Blarney Stone

The Irish are excellent storytellers and there are many legends of how the Blarney Stone came to be.

But this is my favourite story, and our guide told us that the other half is on display somewhere in London protected under glass.

Traveling to Scotland too? Enjoy 7 Crazy Adventures in Scotland

But how did the Blarney Stone become a stone to kiss? 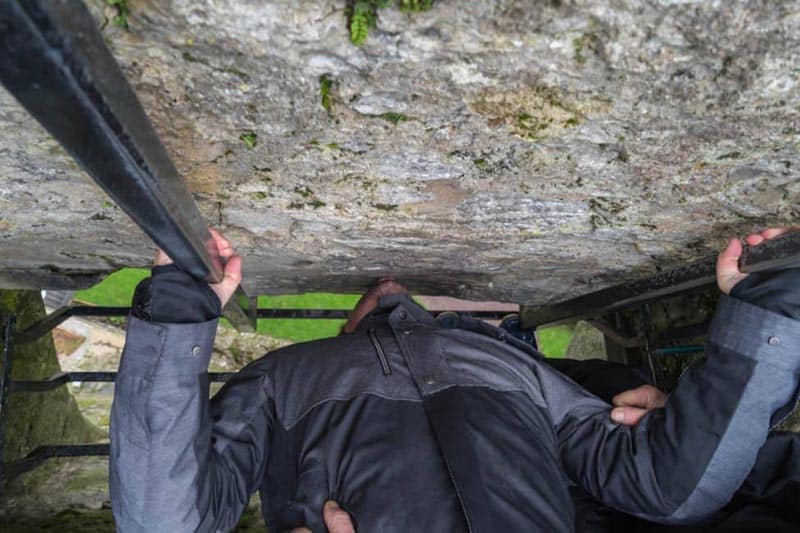 We were told that Cormac Teige McCarthy, the Lord of Blarney, received requests many requests from the Queen of England for him to sign his land over to her.

McCarthy had the gift of the gab and regularly sent letters flittering around the issue but adorning the Queen with flattery saying he would gladly pledge his loyalty to the queen.

Eventually, the Queen saw through his messages and flung his letter aside shouting “He’s just giving me more of his blarney!”

Flying into Dublin? Enjoy our tips of the 11 Best Things to do in Dublin

See our video! Dave and Deb Kissing the Blarney Stone

And so the magical power of the Blarney Stone began.

If you make a pilgrimage to Kiss the Blarney Stone, you will be granted the gift of eloquence and will be able to talk your way out of everything. 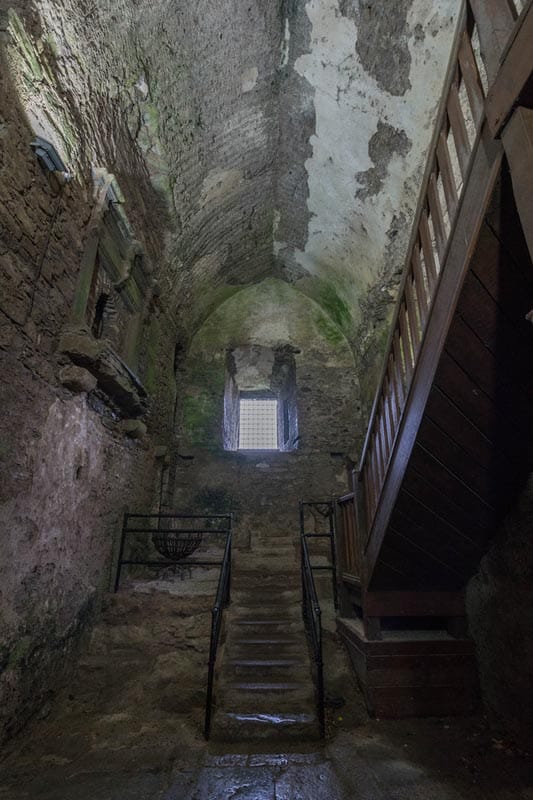 The Stairwell up to the Blarney Stone

Dave and I both kissed the stone, so something tells me, we’re going to have a hard time coming to a conclusion on who wins our next argument!

Do People Pee on the Blarney Stone?

Contrary to popular belief, locals do not pee on the Blarney Stone.

When we said we were going to Kiss the Blarney Stone, everyone told us they’d never do it because locals pee on it.

We wanted to get to the bottom of this controversy so we had to see for ourselves.

During opening hours, there are two men working at the Blarney Stone at all times.

One holds on to the person leaning back to kiss the stone and the other takes photos of people. W

hen the Blarney Castle is closed nobody can go inside.

When we asked our guide about the Blarney Stone peeing myth, he said that locals used to try to get a rise out of tourists at the pub when they said they kissed the stone.

Oh yeah, well you know what I did on the stone last night?”

And that is how it all began.

So on to more important things.

The Blarney Castle and Gardens 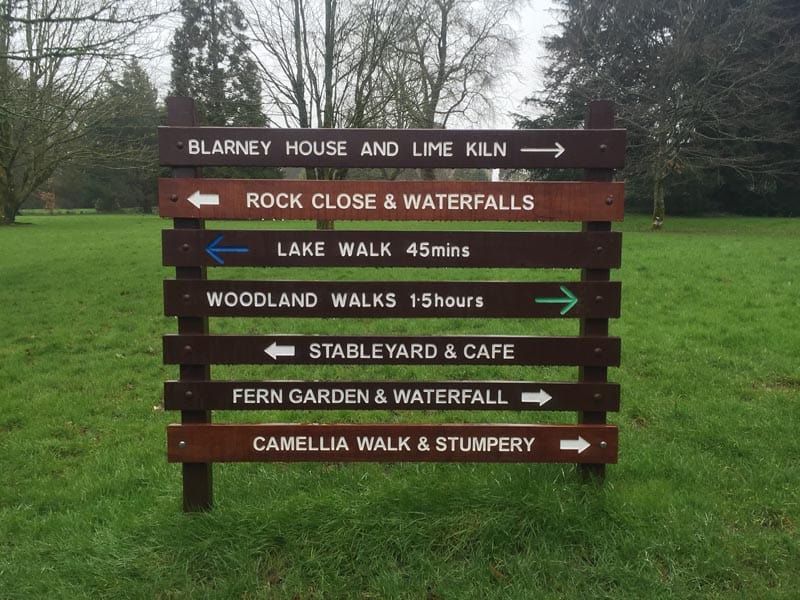 Signs to the Blarney Stone

When you visit the Blarney Castle, be sure to spend at least an afternoon touring the castle gardens.

There is a poison garden fit for a royal family looking to eliminate their rivals.

Filled with plants like Mandrake, Ricin, Wolfsbane, and Opium the gardens go back to a time when plants were used to treat ailments and relieve illnesses.

I tend to watch a lot of movies and TV so I imagine a darker time when kings and queens were poisoned by their loyal servants looking to succeed the throne.

Or maybe I’ve just been watching too much Game of Thrones.

Catch up on Season 5 of the Game of Thrones now. 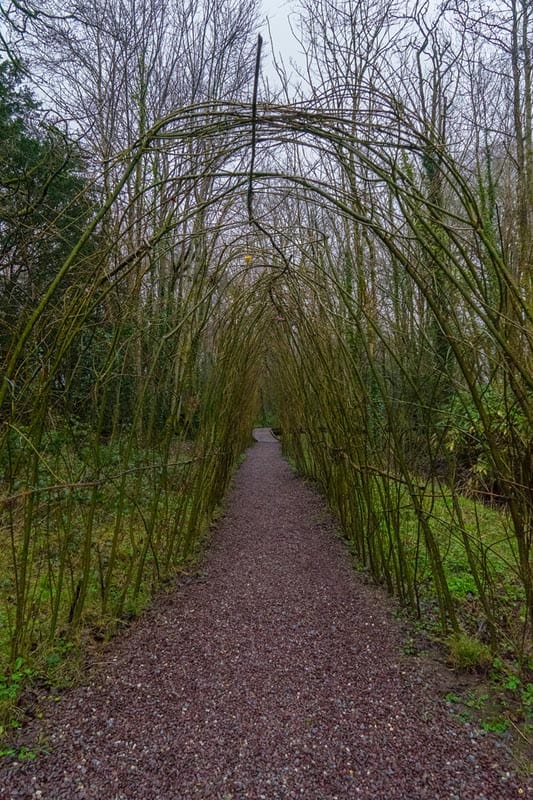 The McCarthy’s had a witch living on their land who advised them and told them of the powers of the Blarney Stone.

Visitors can leave a coin and ask the witch to grant their wish.

But don’t worry, it is said she only comes out at night when the castle grounds are closed.

But you can tour her kitchen where a famous chef once cooked a pot of porridge or you can witness the sacrificial stone set at the top of the path.

Cork is a great stop on your way to the Wild Atlantic Way, see all there is to see and do! 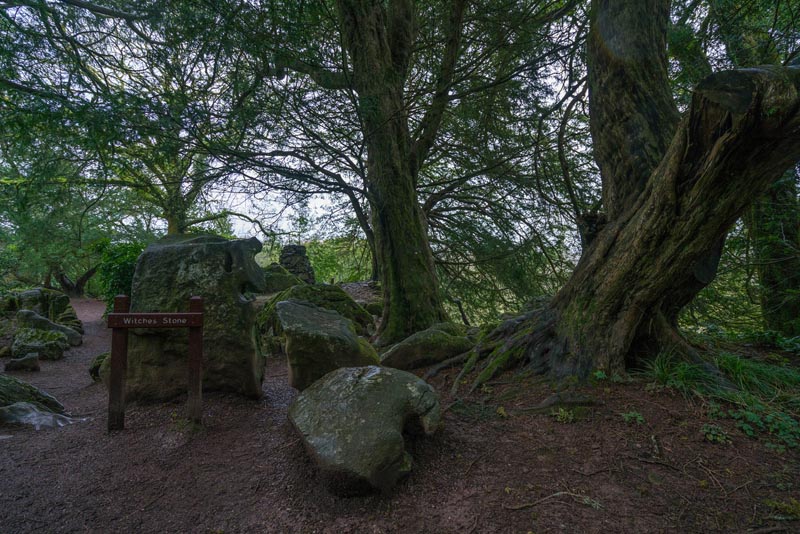 The Witches Stone of Blarney Castle

If you are brave enough to walk down the wishing steps backwards with your eyes closed thinking of nothing but your wish, that wish will come true in a year!

When walking through the Fairy Glade there are signs telling you to keep a eye out. You don’t want to step on any mischievous fairies today.

Kissing the Blarney Stone is a popular adventure. Try something unique and visit Skellig Michael too. 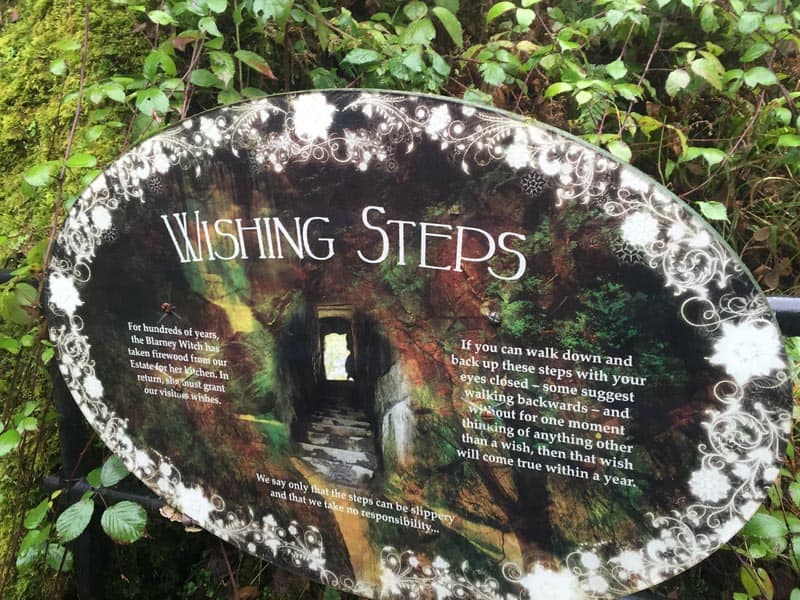 I had just finished saying to Dave that we could spend all day on the castle grounds when I heard a group of young American guys saying the same thing.

It’s an attraction for all ages to visit Blarney Castle.

Millions may flock to Kiss the Blarney Stone, but it’s the Blarney Castle gardens and grounds that make it special.

We visited Blarney Castles in February and barely saw another soul. If you visit in the summer, we hear the lines are agonizingly long.

We walked up the narrow steps of Blarney Castle straight to the top and didn’t have to wait a moment to kiss the stone.

If you go during the off season, you will have the stone all to yourselves and a clear and quiet scene to walk the paths and soak in the magic and mystery of Cork’s Blarney Castle.

The bench at Blarney Castle

21 of the Best Things to do in Blarney Castle

16 of the Best Things to do in Dublin

Do You Believe? The Legend of the Giant’s Causeway

The Mysterious Island of Skellig Michael