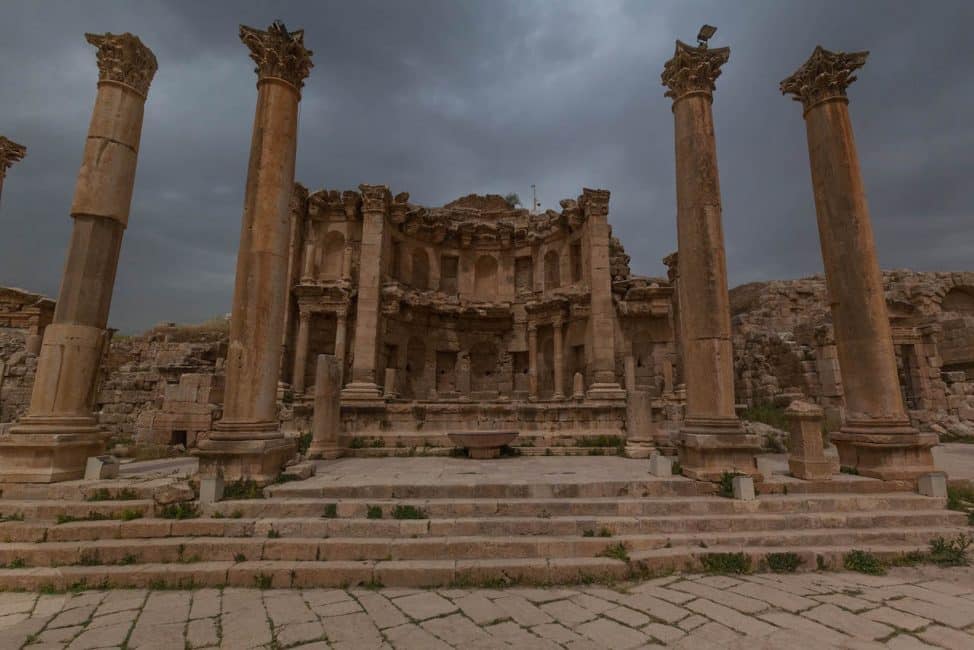 Jerash is a fascinating ancient Roman city that is located just 50 km from Amman, Jordan. Jerash is considered the most well preserved Roman ruins outside of Italy.  It is also one of the busiest tourist sites in Jordan.

One wouldn’t expect to see such a magnificent Roman complex in the Middle East, but the Roman empire stretched far and wide at the height of its power. While recently going through old hard drives we found some long lost video footage of our time in the Middle East. I forgot that we even took footage while at Jerash, but sure enough, we had a lot of it.

Overnight Tours can be booked from Amman showcasing Jerash, Petra and Wadi Rum.

Jerash makes for a great day trip from Amman where you can explore the ruins and learn a bit about historic Roman culture. Dating back 6500 years

The amphitheatre, arches and plazas are in excellent condition due to the dry climate it is located in.

It was hidden for centuries under the desert sand and has only recently been excavated in the past century.

It was only rediscovered by the west in the early 1800s and excavations began in 1925.

Check out our favourite ancient cities from around the world.

I recommend hiring a guide in Amman as they can help you navigate the massive complex.

Our guide Ali helped us stay one step ahead of the crowds of tourists coming in droves on tour busses.

If you arrive on your own, hire a local guide to help you navigate the ruins, Jerash is huge and to understand the story and what you are looking at.

Your tour begins at Hadrian’s Gate an imposing arch dating back to 129 AD.

At its prime, Jerash housed 20,000 people and really began to flourish during the time of Alexander the Great. Located along the trade route, the city thrived and continued to grow until 800 AD.

The History of Jerash

While inside make sure to visit the Forum, Temple of Artemis, and the North Theatre of Jerash.

All structures are beautifully restored giving you a sense of what life was like in this ancient Roman city.

After visiting Jerash, have an Eco Experience at Feynan EcoLodge

A highlight for us was the re-enactment at the Hippodrome.

Jordan has great history like here in Jerash, but it also has beautiful nature too.

Here you will be treated to a show of Roman legionnaires displaying military drills followed by gladiators fighting as they did in the days of Roman rule.

It ends with a chariot race around the hippodrome as the crowd cheers and roots for their favourite team.

The Temple of Zeus is another must see at Jerash and its yet another example of how well the city has been preserved. The stone pillars are reminiscent of Athens own Temple of Zeus and I wonder if

We have never been to a Roman ruin in Italy. I look forward to seeing the Colosseum one day, but in Jordan I got the next best thing.

Entrance to Jerash is 10JD (approx. 14 usd)
Jerash is located 50km from Amman
Several Different companies hire day tours from Amman
We recommend hiring a private car if you can afford the extra money. It’s an excellent way to see the country. Ask at your hotel for details.
Cost of local guide at site: Approx 20JD