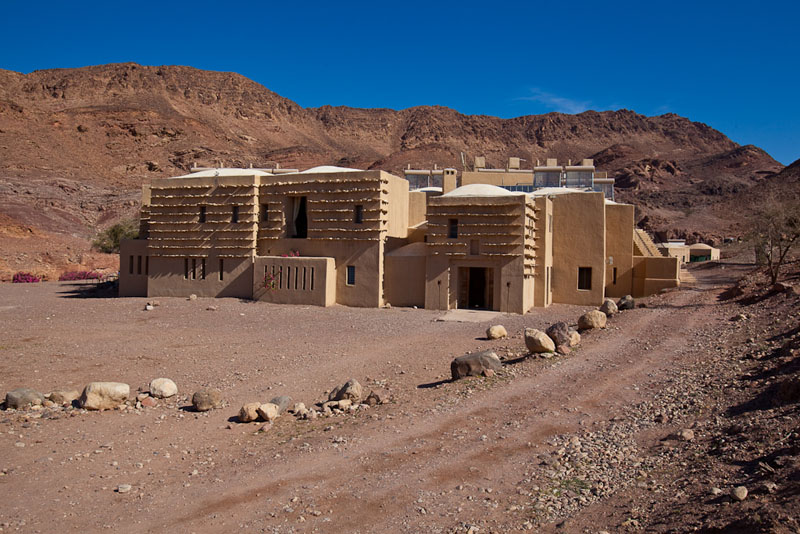 We didn't know what to expect as we drove along the deserted bumpy road to in a remote desert of Jordan. The Feynan Eco-lodge was our destination and all we knew about it was that it was hailed as one of the top eco-lodges in the world by National Geographic Traveler. Set back in a quiet valley of Wadi Feynan this resort is a standout destination in the country.

Located in the Dana River Biosphere Reserve, The Feynan Eco Lodge is a solar-powered retreat offering peace and quiet while promoting conservation and encouraging its visitors to hike and explore the surrounding area. Nick, a representative of the property told us that they have no plans on grooming the road because they don't want people to take their cars into the reserve.

They want patrons to leave their automobiles at the visitors centre and take a shuttle to Feynan. It not only is better for the surrounding environment, but also helps to employ the local people. 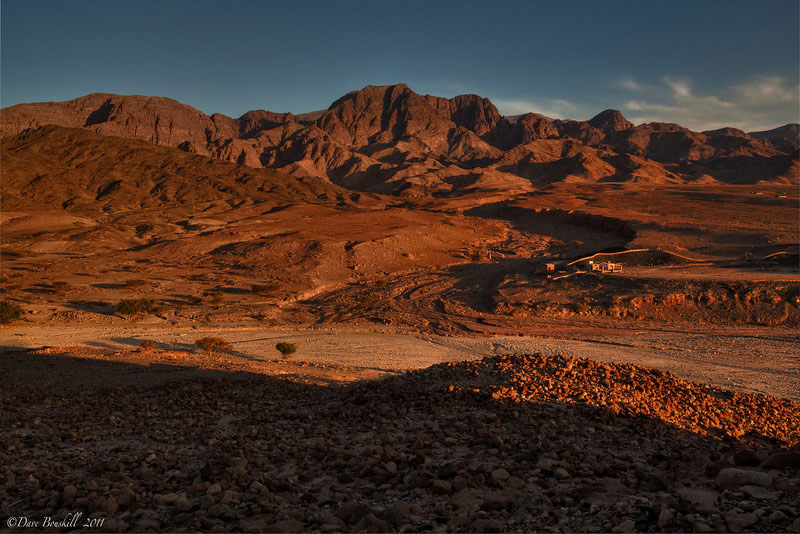 The Feynan Eco Lodge is a part of The Royal Society for the Conservation of Nature. It is a project that makes protecting Jordan's natural resources and wildlife. It also works to develop programs to support the rural communities of Jordan by creating jobs in eco-tourism and craft production.

Today we were being guided through the reserve by a member of the community, Mohammad grew up in this very reserve and knows the area like no one else. 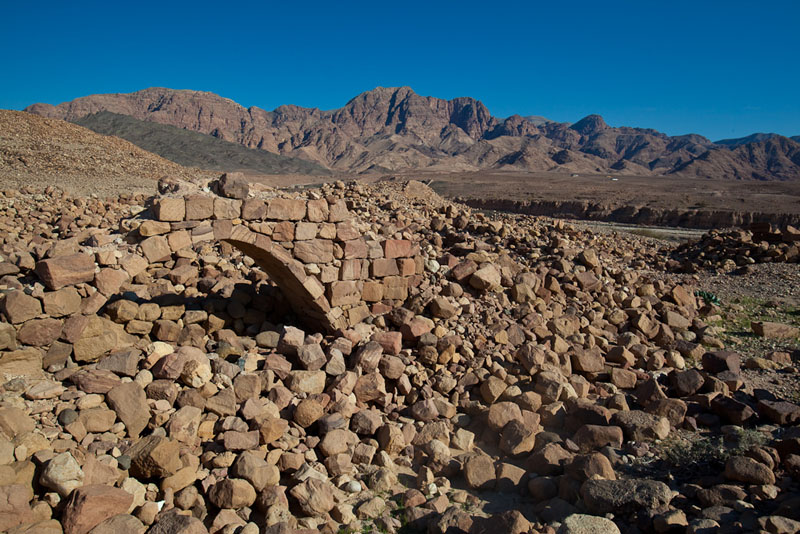 Jordan is an ancient land and Wadi Feynan has been inhabited for centuries. It was fascinating to us how Mohammad would pick up a piece of glass and tell us casually that it is from Roman times dating back to around the 7th century.

Mohammad told us that he grew up in a cave in these mountains. He then lived in a Bedouin tent and has since gone to university, moved into the city and now lives in his very own house in a nearby town.

His life has changed immensely from his early childhood when he herded goats far into the mountains for days on end. He was only a child of 7 to 10 years old when he would camp out alone to take care of his herd while fending off wild animals. To keep his fear in check he would play the flute to cut the silence of the night.

He played his flute for us as we watched the sun go down and told us stories of his life and family. 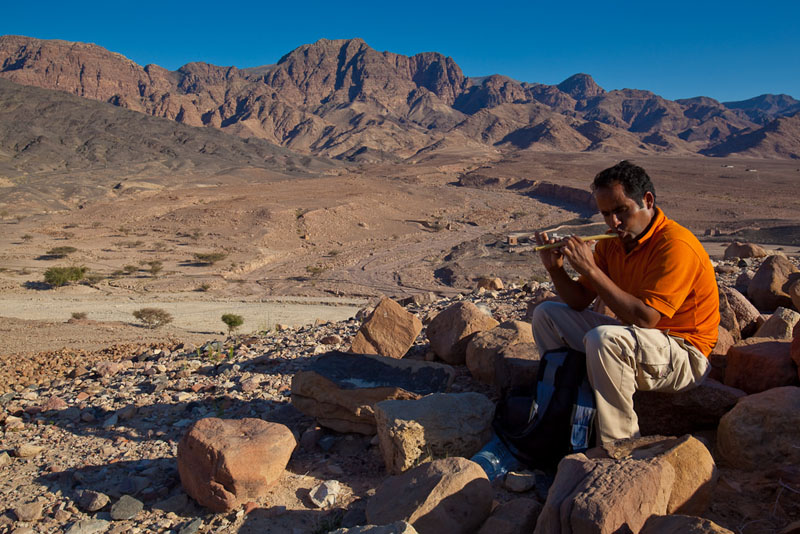 He tells us how he couldn't imagine sending his son off into the mountains today, but it was so normal when he was young. Mohammad is a well spoken and highly educated man that studied Arabic Literature in university. He has big plans for his future and the future of the Bedouin tribe that he belongs to.

Working together as a community, everyone supports and respects one another. He speaks with great thought and intelligence when he discusses politics, economics and history and I am drawn to his every word. 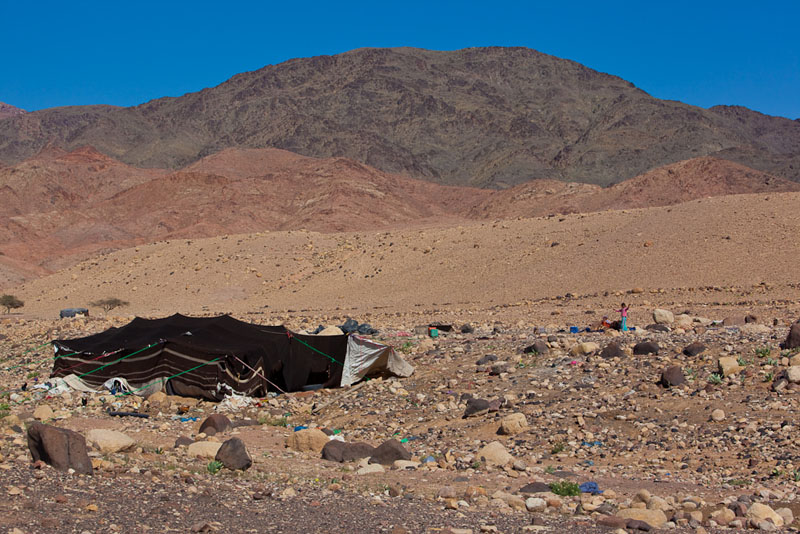 We thoroughly enjoyed our hike through the valley learning about its flora and fauna. Mohammad pointed out plants and trees that provide everything from sustenance and shelter to cleaning supplies and remedies. But it was the conversation that we truly were captivated by. 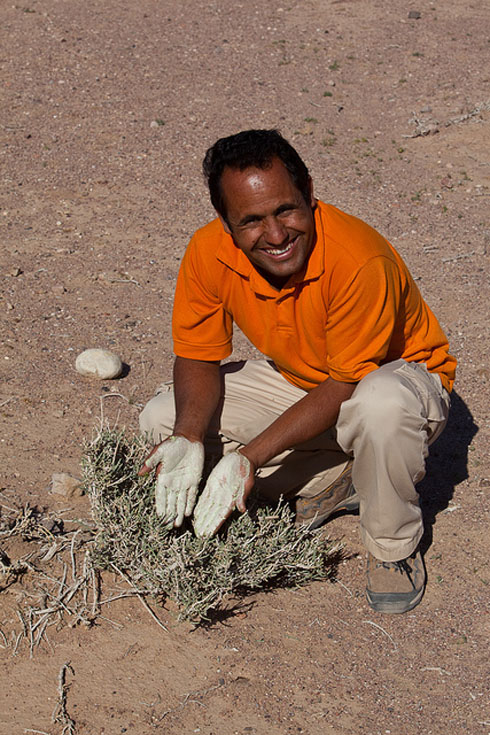 We made our way to the top of a mountain which turned out to be an ancient ruin. From afar it simply looks like a big hill in the valley. Upon closer look it is a pile of rubble from a castle thousands of years old. This was an Byzantine monastery dating back to 300 AD.

When the Romans came to the area, they turned it into a castle. Looking at it on the way back to the lodge, we imagine how magnificent it must have looked to outsiders happening upon the Valley. 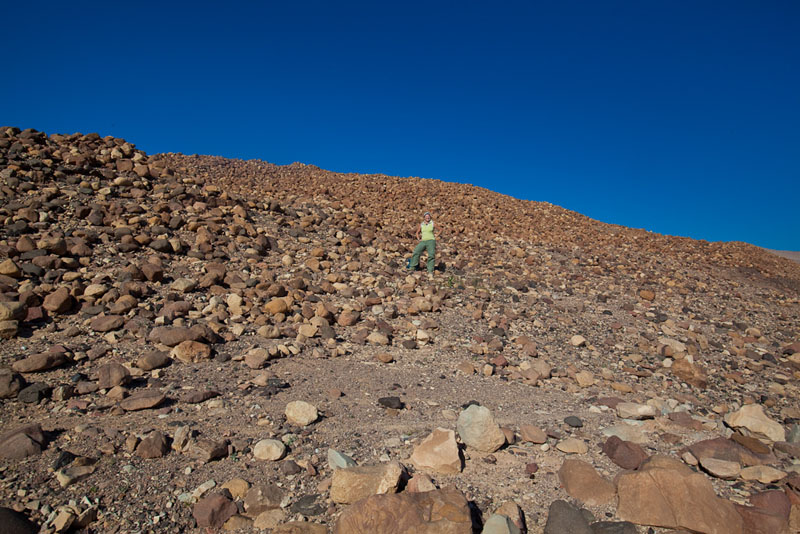 As we talked with Mohammad, the sun set in glorious shades of orange. We sipped tea made over a small fire and discussed our lives and his.

We enjoyed ourselves immensely and as we walked back to the lodge and Mohammad asked us if we would like to meet his family. We stopped in at a Bedouin tent where children were playing and a fire was burning. We met 3 generations that night. Mohammad's sister in law, her children and his mother.

We ate fresh bread cooked in the earth and laughed as Mohammad translated as we spoke our few Arabic words that we had learned over the week. The kids got a kick out of my name. Debra means “a bug that bites” in Arabic and they didn't believe I was called that.

In return they decided to call themselves made up names to match mine.  Just before leaving, Mohammad's brother came home and we enjoyed another pleasant exchange. 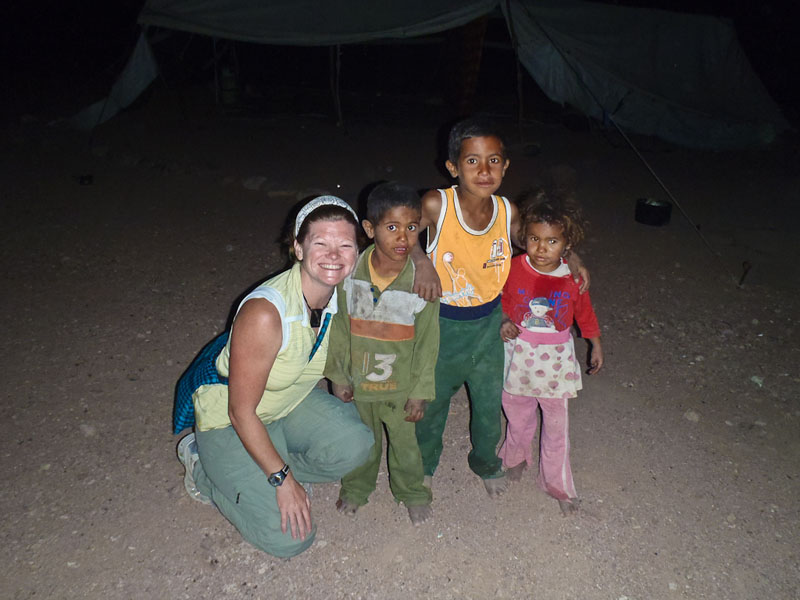 It was now dark and our guide for the week Ali was getting worried. He called us regularly and finally came out looking for us with Mahmoud our driver. Finding us laughing and joking on the side of the road, we put his mind at ease and told him that we would meet him at the lodge.

Upon our return, we were greeted to a feast and a candlelight dinner out on the patio. It was the perfect ending to a perfect day in Jordan. 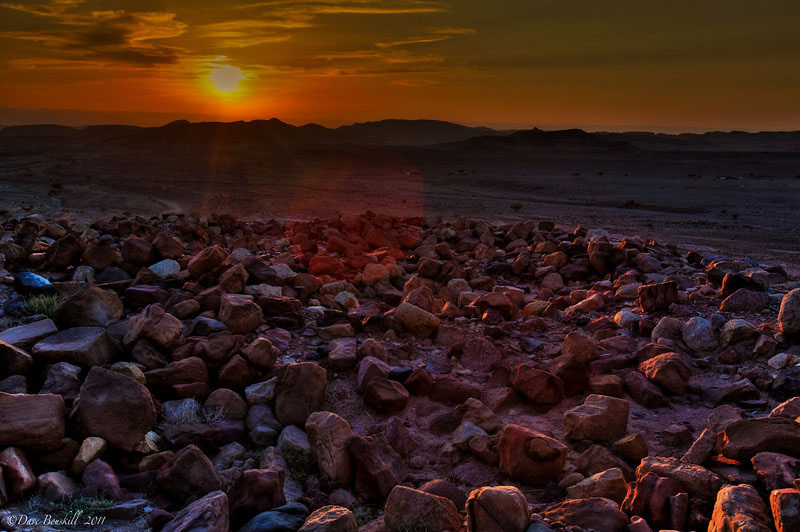 But that wasn't all, we finished off the night laying on mats on the roof looking up into the crystal clear night sky. Millions of stars danced above as we gazed into the darkness free of any light pollution to distort our view.

We felt euphoric and couldn't keep ourselves quiet. We laughed and joked with Ali, Mahmoud (who had become good friends by now) and Nick until we finally felt the cold desert air enter our bones giving us the signal to turn into our room. 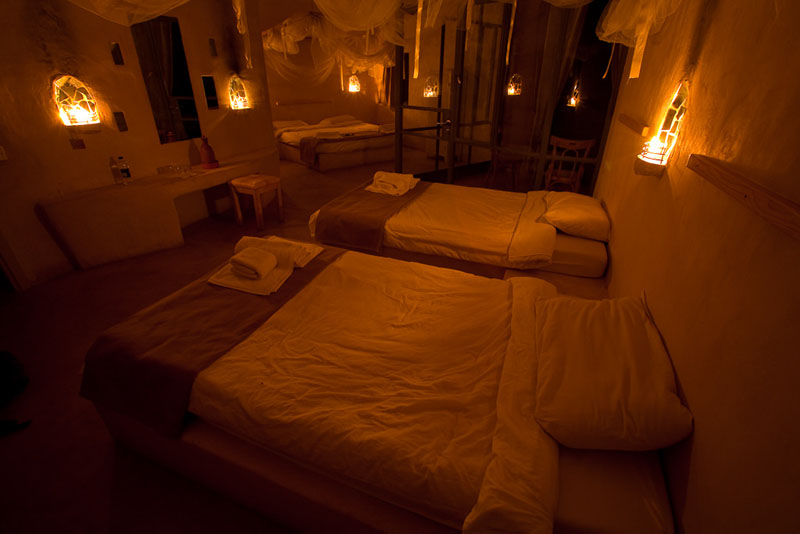 The rooms at Wadi Feynan are exactly what you would expect from an eco-lodge. Inviting and comfortable. A place that you never want to leave and could simply curl up with a book and while away the days. We slept peacefully in our silent sanctuary and morning came too soon for us.

Looking for more things to do in Jordan? Check out our Best of Jordan photos and video

We could have stayed here for weeks exploring the area and can't wait to go back and do exactly just that.

Jerash – Welcome to the Ancient Roman City of Jordan

An Unexpected Adventure – Slumber Party in a 2,000 Year Old Cave

12 Amazing Ruins of the World: A Visual Memory