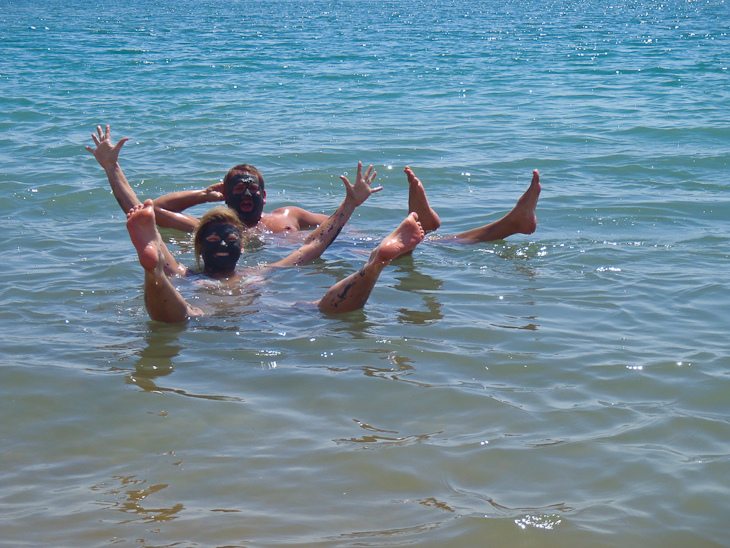 “I can’t float.” That’s the first thing dave said when entered the Dead Sea in Jordan. It’s a fact and I am envious of Dave because he can always lay back in a pool, relax and enjoy floating on the top of the water with very little effort. Unless I constantly tread water, wave my hands or kick my feet, I cannot float. The minute I stop moving, I sink.

So it was very exciting when we went to the Dead Sea in Jordan. This is a place where anyone can float and I was determined to put this rumour to the test. 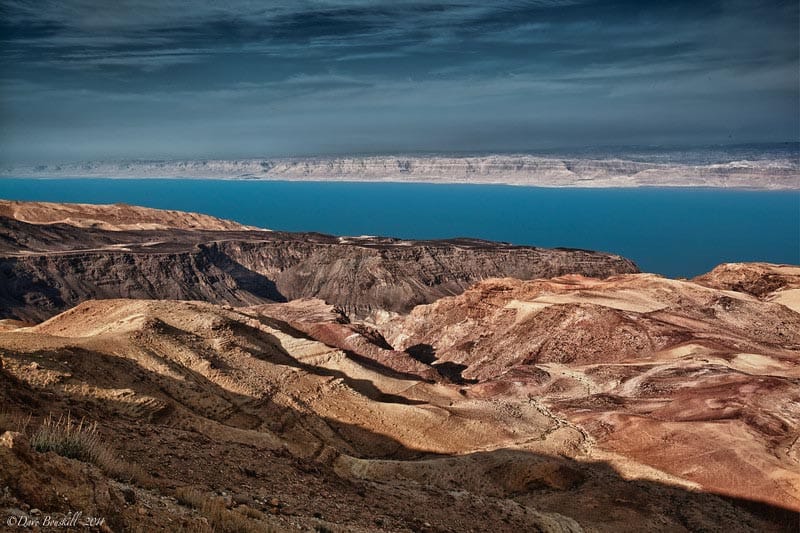 While we did have our fair share of problems with two other 5 star hotels in Jordan this was one of the better ones we stayed at outside of Amman. It isn’t your typical Holiday Inn, it is more upscale than the ones we normally frequent during our road trips to Florida and hey, we were here for the Dead Sea, not the hotel.

The only problem was how generic this hotel is. It could be located anywhere in the world. Sure it is nice and has all the amenities, but if I am staying in the Middle East, I want to feel like I am in the Middle East. 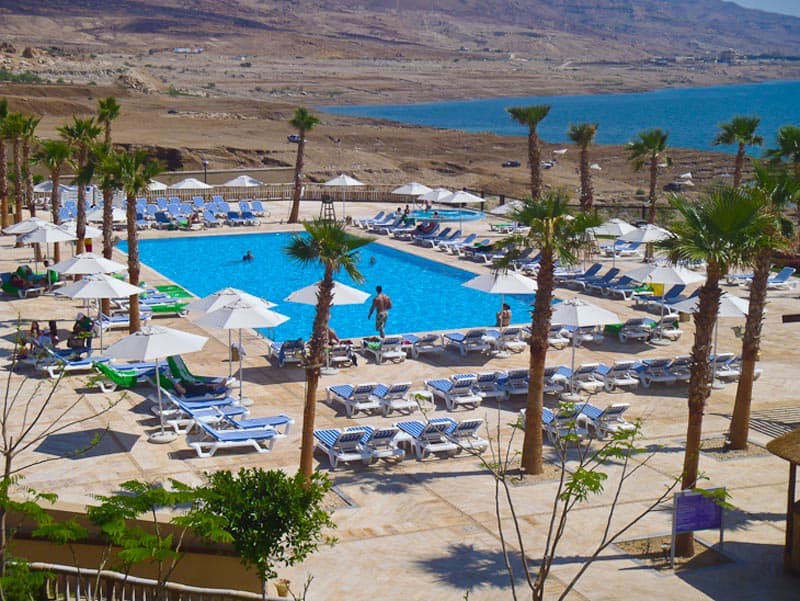 The Dead Sea has a salt level of a whopping 33%.

To give you an idea of the saline levels, the ocean has a salt concentration of only 3.8%. And that my friends is exactly why we humans have such an easy time floating in the Dead Sea. 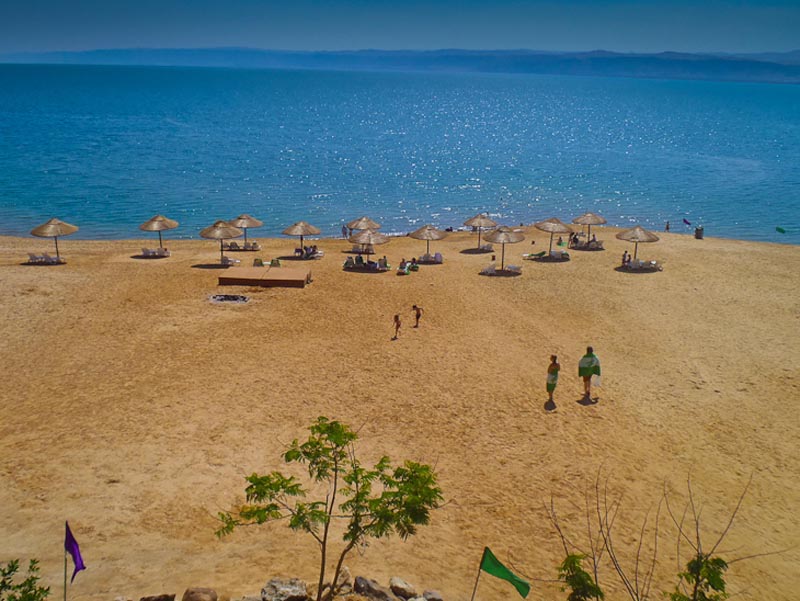 About the Dead Sea

It is only 67km long and 18 km wide at it’s widest point. However it is deep. At 77 m ( or 1,237 ft) deep, the Dead Sea is the deepest ultra salty lake in the world. Where we were located it is only about 7km wide giving us a clear view of Israel across the pond. At night the lights of Jericho flickered from a land so close to us and yet so far away for many Jordanians. 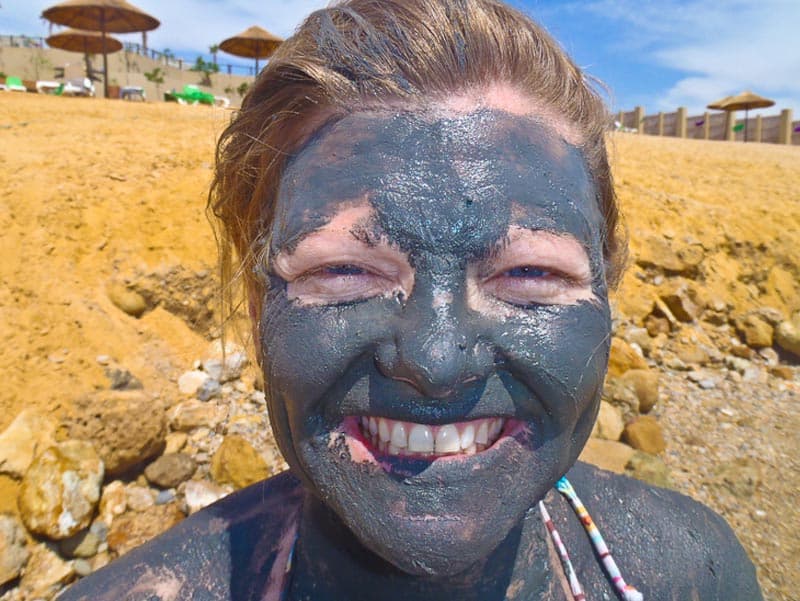 We love being full blown tourists and instead of heading for the water, we made a detour  for the mud. You can’t visit the Dead Sea without slathering your entire body with the black goo. It just wouldn’t be right! 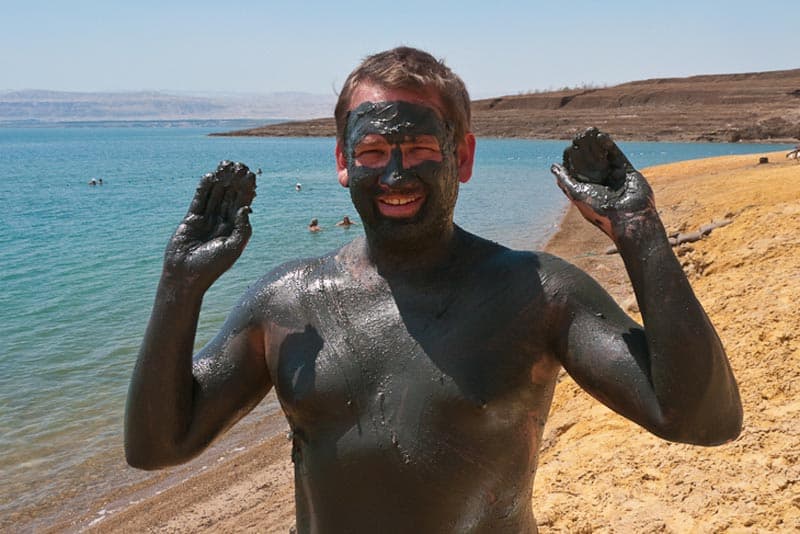 The medicinal mud from its shores have a healing power that people swear by and after you have washed yourself off, your skin will feel just like a baby’s bottom. People actually come to the Dead Sea for a month at a time to take advantage of its healing benefits.

We just wanted to look good for the photograph!

You Really do Float in the Dead Sea!

Once we were thoroughly “muddied up,” we took our waterproof camera with us into the water 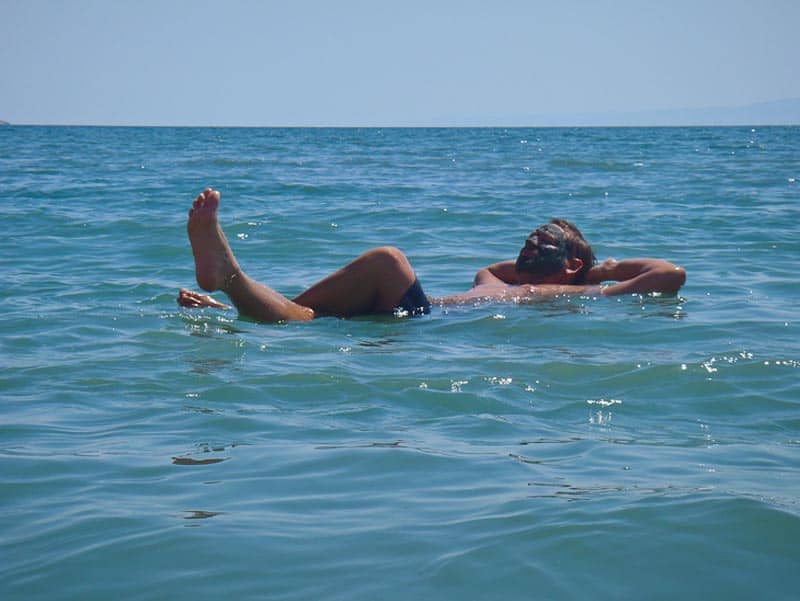 . It was warm and didn’t feel too different from any other body of water I had walked into, but I was a little worried about what the salt concentration would do to the camera. Dave told me to relax and enjoy the experience. I dutifully listened. 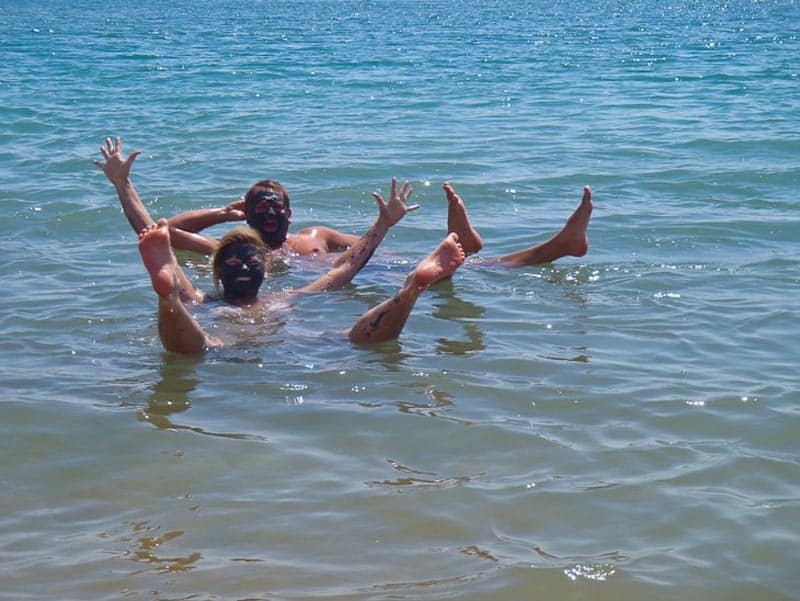 The minute I laid back into the water, I could not believe the feeling. I actually felt like I had water wings on my legs and shoulders allowing me to float with ease in the thick waters of the Dead Sea.

Dave could still float higher and easier than me, but I didn’t care, I was floating! Dave kicked himself for not bringing a newspaper down so that we could grab that ultra cheesy tourist shot of us reading the newspaper in the water. But no matter, we still managed to be quite cheesy when it came to grabbing snapshots. 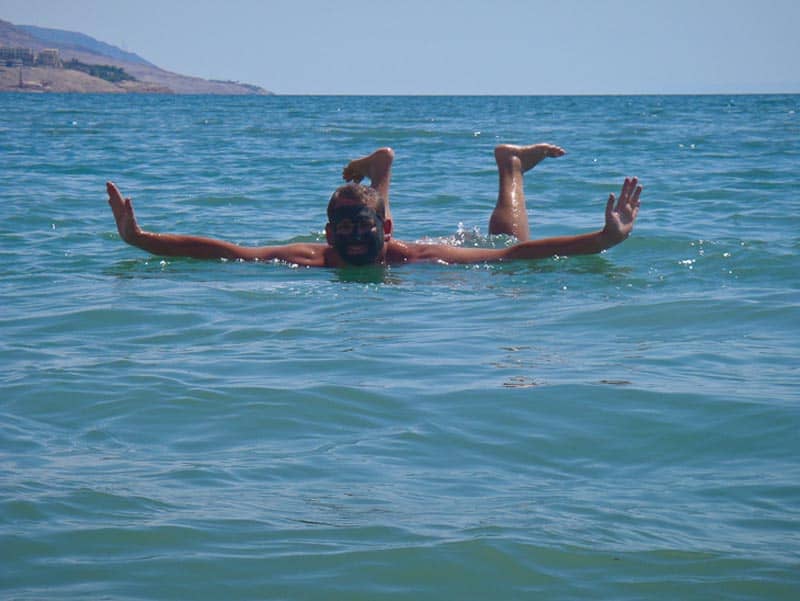 We played around in the good old Dead Sea for quite a while until it began to sting my skin. Dave lasted 15 minutes longer than me. I enjoyed a shower on the beach and a lounge under a sun umbrella while he took advantage of every minute in the water.

This could be the only time in our lives that we could experience such a phenomenon and he was taking advantage of every second.

The salt of the Dead Sea is strong and you must be careful not to submerge your face into the water. It will sting your eyes something fierce. If you have a cut of any kind, you will definitely feel it and will not last very long in this second most densely salted body of water in the world. 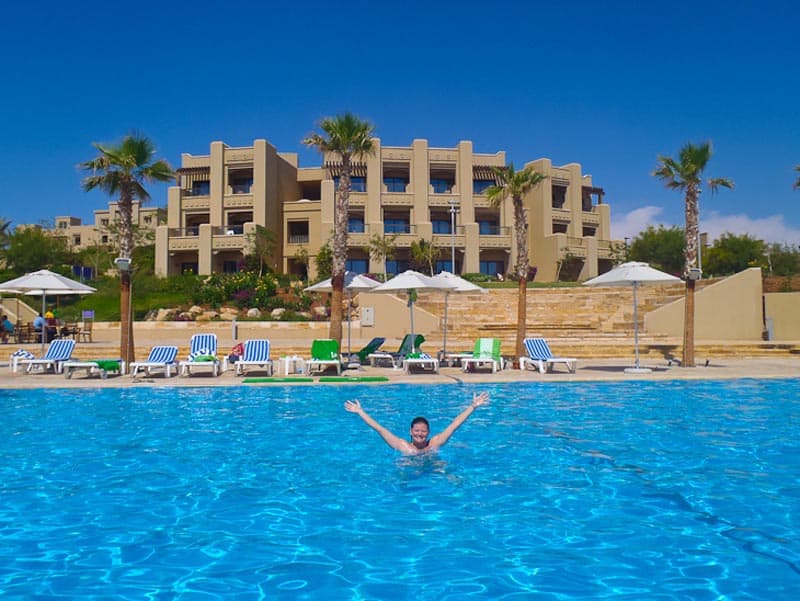 After our fun and frolicking, we hit the pool of the hotel for a little bit of pampering. We laid back on the lounge chairs of the “adult only pool” and took in the views of the infinity pools, the muli-level pool, the wading pool and our pool.

This Holiday Inn definitely has it’s fair share of pools. We even found a quiet kiddy pool near our hotel room complete with canopy to shade the little tykes from the harmful UV rays of the sun. 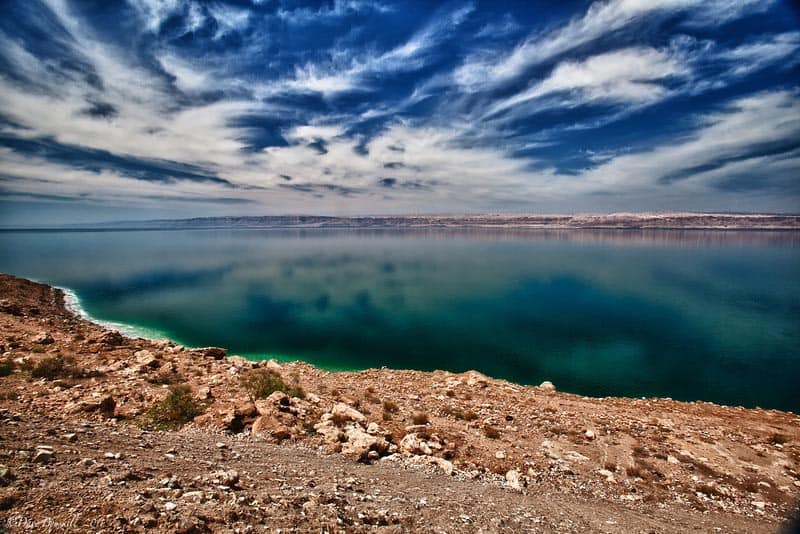 It was pretty cool being at the Dead Sea. Not only is it an awesome break in your Jordan Adventure to spend a day or two by the sea, it is a major historical destination.

It was a refuge for King David, a health resort for Herod the Great and it was used in the mummification process for the ancient Egyptians. This sea has definitely seen it’s share of history. 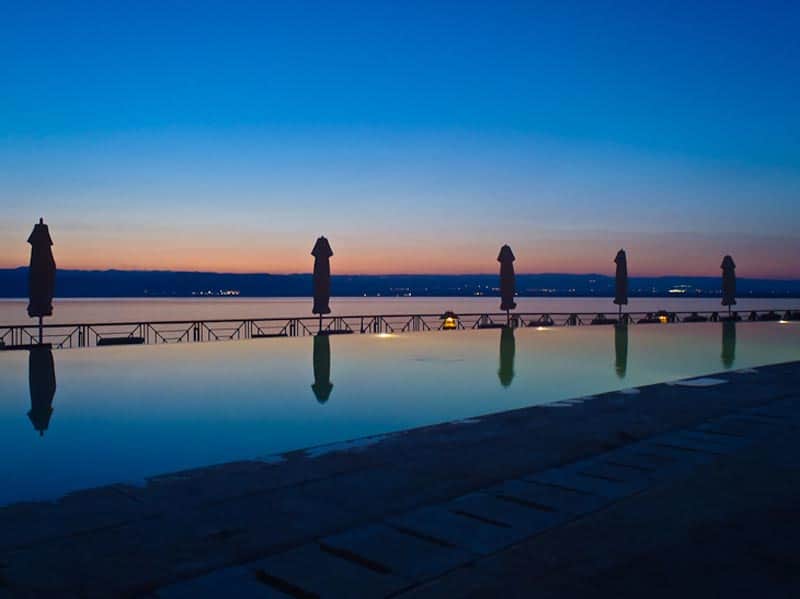 We ended our night having dinner at the Movenpick Hotel. Their friendly PR contact came out to greet us, took us on a tour of the hotel and treated us to a delicious meal of anything we would like.

We stayed all day at the Holiday Inn and didn’t hear a peep from them. One dinner at the Movenpick and we felt like we could stay the week and never tire of the atmosphere.

10 Exciting Things to do in Jordan