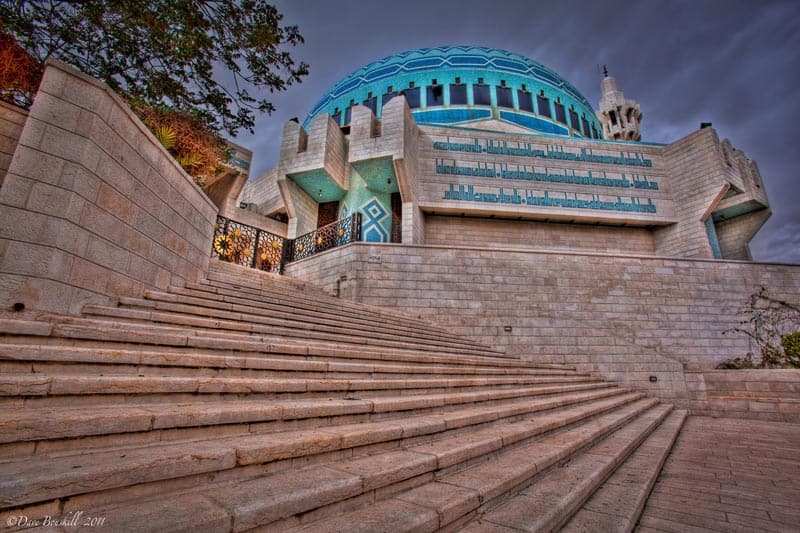 Walking Amman was a magical experience. People were friendly and welcoming as we visited the King Abdullah Mosque and various street vendors throughout the city.

We could have had another buffet dinner at a fancy hotel, but our clever guide Ali decided that we would enjoy a meal out with the locals for our final day in Jordan.

He was absolutely right.

It was an incredible 10 days in Jordan courtesy of the Jordan Tourism Board and it started off on a high note with our stay at the luxurious Four Seasons Amman. W

e know the Four Seasons well here in Toronto. The Flagship store is located in the heart of Yorkville and we have visited many a room during our days working in the film business

. It is a very busy place during the Toronto Film Festival.  Every movie star that comes to the city stays here. We never thought that we’d stay in a Four Seasons ourselves let alone one of the top hotels in the entire Middle East. 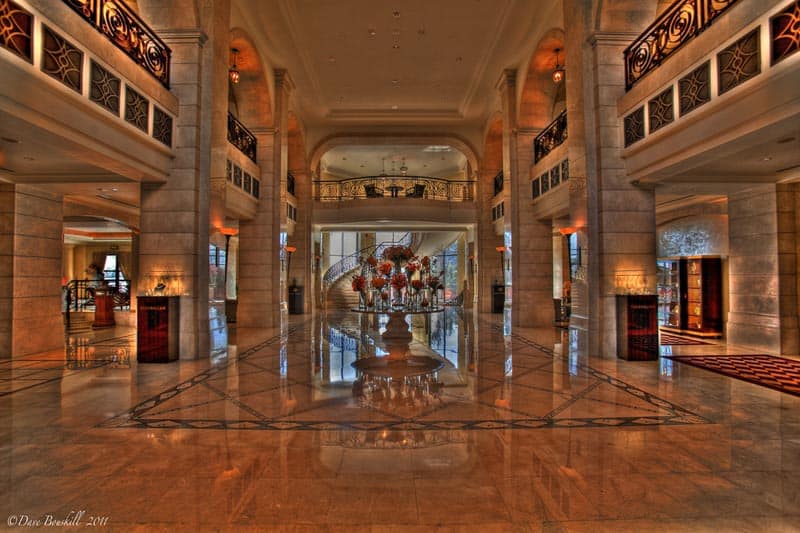 We were greeted by Halla upon our arrival and dinner was set for 7:30 pm. It was a delicious 4 course meal of seafood, pastas and decadent desserts. Oh yes, we could get used to living like this. Even though the Four Seasons Amman is a luxury hotel, we never felt the stuffiness or uncomfortable feeling you get when you sit somewhere you don’t belong. Everyone is relaxed and welcoming; the guests and staff included. 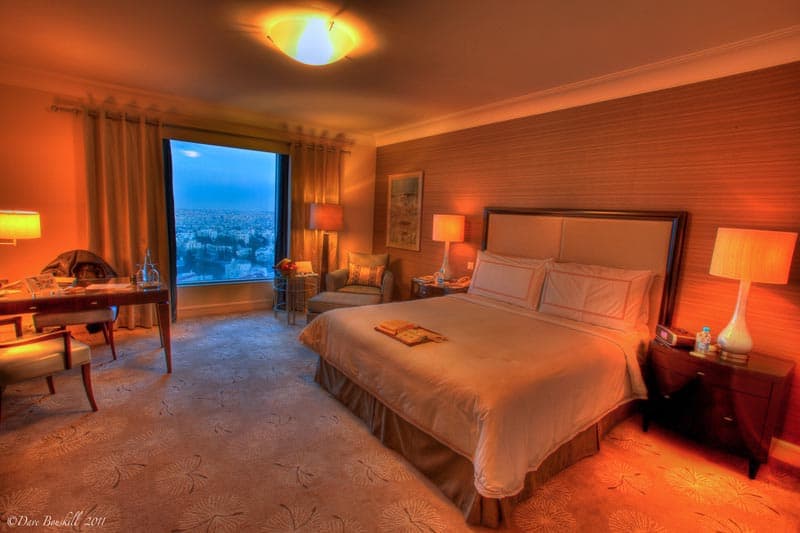 Our suite at the Four Seasons

The Four Seasons Amman has a reputation of being the best hotel in Jordan and it lives up to it.

What we loved about it was how, yes, it is well known around the world, but it had a definite Jordanian feel and atmosphere. We had the best of both worlds, a little bit of home with a Middle Eastern Flare. We made sure to wake up early to use the pool and spa before setting out on our Jordan adventure, but it was difficult because we didn’t want to leave our cozy yet spacious room.

It was time to venture out and see the country.

We had amazing adventures in Jordan from Canyoning in Wadi Mujib, Swimming in the Dead Sea, Visiting Petra, A Safari in Wadi Rum and Hiking through the Dana River Biosphere Reserve.

We felt that we got a taste of the best of what the country has to offer and we can’t wait to go back one day to explore some more! 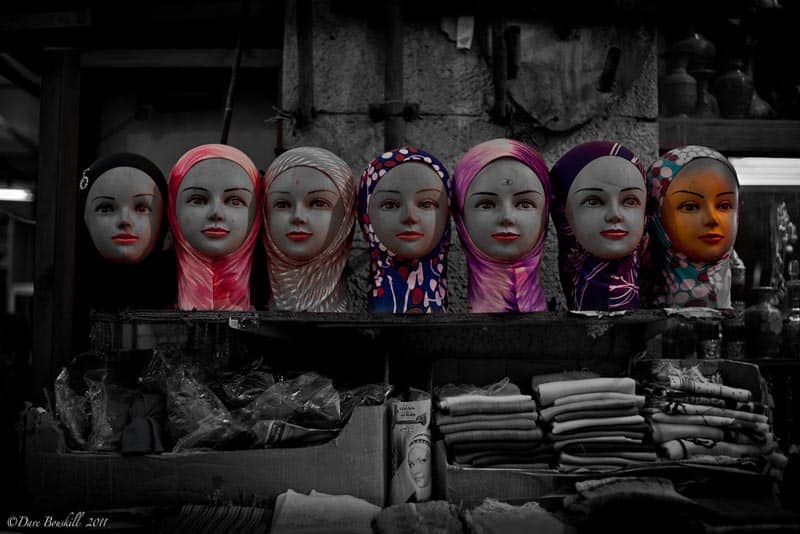 Upon our return to Amman, we were eager to see how people lived in Jordan’s largest city.  Our driver Mahmoud and our guide Ali had gotten to know us quite well over the course of 10 days and knew that it was time to take us out of our luxurious bubble and into the streets of Amman.

Fact: Amman is one of the oldest continuously inhabited cities in the world. 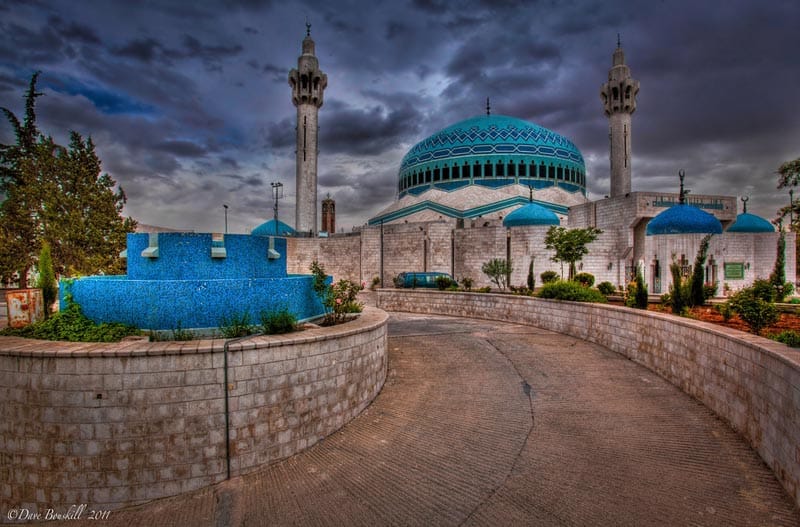 Steps to the King Abdullah Mosque

We started by visiting the King Abdullah Mosque, it is one of the most famous mosques in Jordan. Ali and Mahmoud were quick to point out the large church right next door.

They stated that the Jordanian people get along with each other and different religions live in peace. I thought is was a wonderful sentiment.

While people are protesting a mosque in New York, others around the world are opening doors and practicing tolerance.

We drove around the different districts and checked out the higher end shopping areas and cafés where the young and hip meet on Thursday nights, but it was our arrival to the market that made us feel like we were a part of the city.

For a historic tour of Jordan, enjoy our post on the Ancient Roman City of Jerash 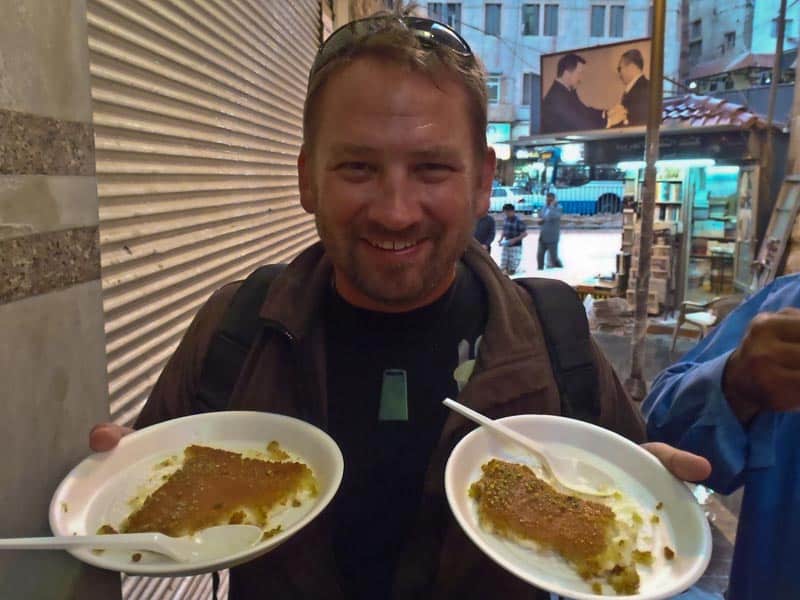 It started with a stop for dessert.

Ali always eats dessert first. If he had it his way, he’d skip the main course completely and only eat dessert. That is unless his mother is cooking. She is the best cook in Jordan.

We stood in the rain outside a crowded and small stand named Habibah Sweets where we ate the delicious and filling Kunafa dessert. This place is one of the most popular sweet shops in Amman and we could understand why. 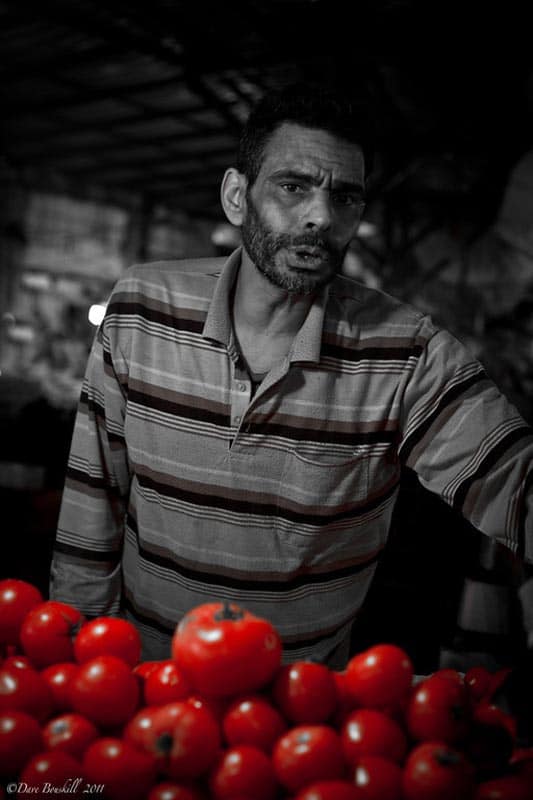 Now that our stomachs were filled, we were able to walk along the streets to enjoy the hustle and bustle of the city.

People were warm and friendly and we couldn’t believe how open they were towards us. When we strolled through the market, men asked Dave to take their picture.

They were yelling and singing and Mahmoud translated what they said. It sounded much more exotic when I didn’t know their words. “1 kilo for 1 dinar, buy now!” To me it sounded like they were singing, “The Day is beautiful, The Birds are singing, I’m in Utopia”

See – Petra By Night in Photos

The storefronts were decorated with Shishas and colourful headscarves. There were handcrafts and jewellery on display and people walked down the street smiling and chatting, it seemed like Mahmoud knew everyone in the city as we passed. We met his boss and other shop owners who invited us in for tea. 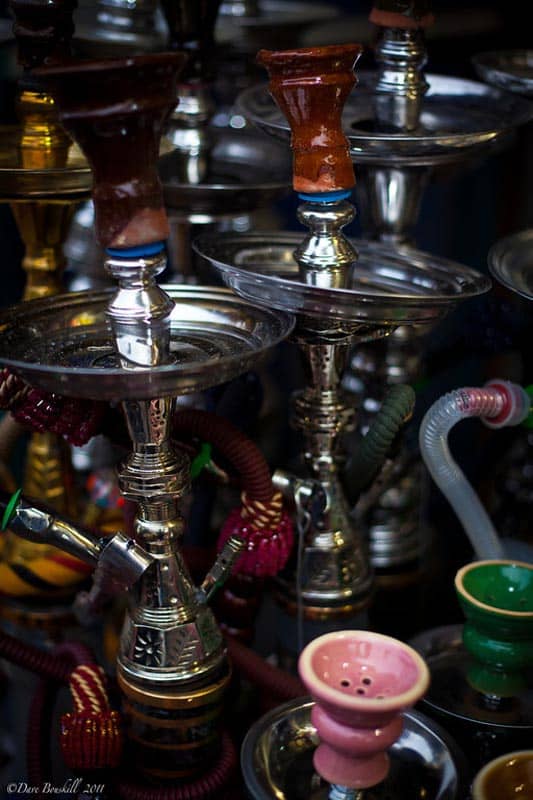 Shisha’s were in almost every store front.

We decided to pass on the tea and move on with the tour.  We had a constant guilt of keeping Mahmoud and Ali away from their families for such a long time.

They put in 14 hour days with us during our time in Jordan and we always had the thought in the back of our heads to move things along so that they could get home. 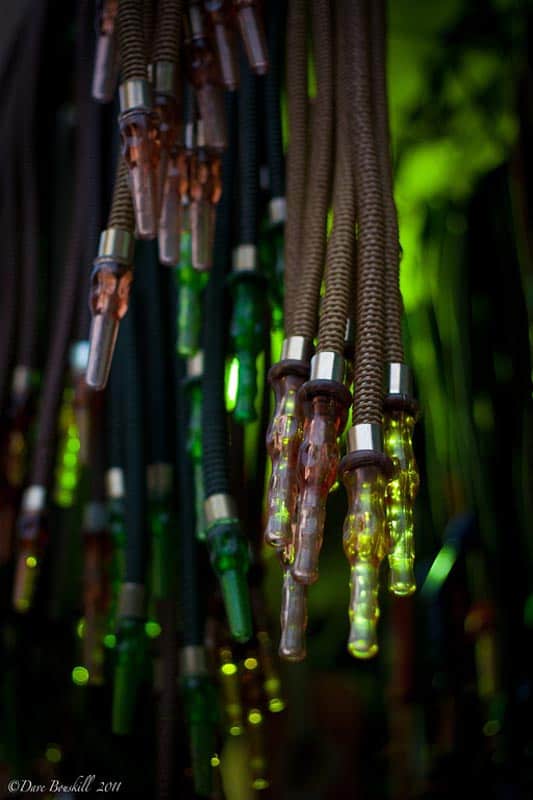 Not that they ever made us feel that way, it was us worrying for them. In the West People wouldn’t think of working so late into the night unless they were getting paid their overtime above and beyond their salaries.

In other cultures we always have a difficult time grasping how hard people work and how long they are away from their families. It is something we will never get used to and something we will always do our best to help send people home a bit early if we can. 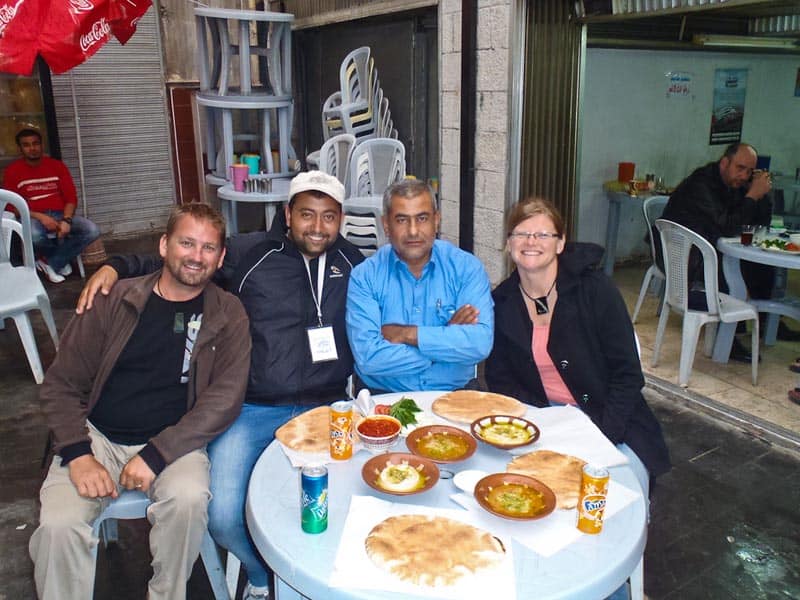 We ended off the night at the Hashem Restaurant an outdoor café located in an alleyway packed with patrons.  When we arrived, they busted out a table for us and quickly brought a feast of food. I was still full from the Kunafa and had a difficult time putting back all that food, but it was so delicious, I couldn’t say no. It is the oldest restaurant in Amman and is The King himself has eaten here and I can see why, we were eating a feast made for a king!

Our night with Ali and Mahmoud turned out to be one of the most memorable moments for us in Jordan and it was a perfect way to end our time there. We had ups and downs in the country, but one thing that was never down was the people we met, the friends we made and the scenery we saw.

For a different perspective of Jordan, Visit Solo Travelers, Shopping in Jordan, Souvenirs and my Wish List.

For more posts on Jordan

A Jewel of Petra, The Monastery

Camels at Sunset in Wadi Rum