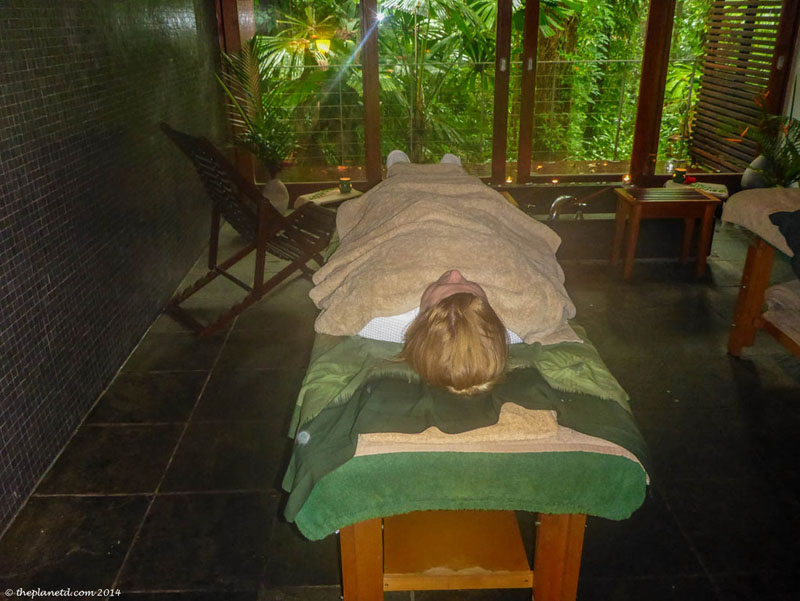 While staying in Alleppey India for our houseboat tour, we had to try an Ayurvedic massage. Alleppey is famous for its Ayurvedic massage treatments and our bodies needed the pampering after traveling by train in India.

But I must say, our Ayurvedic massage was a bit more than we bargained for.

Here’s a quick excerpt I wrote in my travel journal:

I learned how to shower like a true Indian today. Because I had a woman bathe me! I never knew how the people of India managed to shower with a bucket of water without making a mess.

Well, now that I’ve been bathed I know it all.

It all started when we arrived at Palmy Lake Resort after our houseboat tour.

Once we settled into our spacious bamboo bungalow, Marcy the owner asked us if we would be interested in a massage.

Dave and I love massages, but we were on a tight budget and we jsut splurged on a houseboat tour, so we kindly declined the offer.

There’s no pressure in Southern India. We said no thanks and she gladly said no problem.

You see, here in the south of India, we haven’t been met with any hard sales pitches.

As we lay on the bed wondering what we were going to do with the rest of our day, the thought of a massage was sounding more appealing.

Laying there listening to the birds chirping mixed with the horns blowing, we slowly cooled off and started to think that a massage would be a great idea.

What better way to detoxify our bodies and maybe help us feel ready to tackle the rest of India? (or at least the next few days).

We signed up and made an appointment for later that afternoon.

We arrived at Sreekrishna Ayurvedic and Panchakarma Center after a 15-minute walk from Palmy Lake Resort.

A stoic man, told us to sit down where he continued to look at us and say nothing.  We didn’t really know what to do, so we sat there and said nothing.

It’s funny how a massage is supposed to make you relaxed, but when we have one in a foreign country we are always so tense and anxious!

After a couple of minutes, he got up and left. Then he came back and sat back down and started talking to one of his staff members.

A little while later, he told us that they were cleaning the room and we would be right in.

That was a relief, we didn’t know if he was waiting for us to say something or not.

Dave and I were led into separate rooms.  I had a female masseuse and Dave had a male masseur.

My masseuse barely spoke a word of English. She motioned me to strip and then sit on a stool.

I didn’t know if I was supposed to strip naked or not, so I did.

While I was sitting on the stool, I felt quite silly thinking that I should have left something on. But, there was no turning back now!

She poured oil into her hands and massaged my hair and scalp.

She worked on massaging my scalp and face and then worked down my back and shoulders.

I didn’t realize that I had that much tension, but it has been a while since I carried a pack, so my shoulders were definitely feeling it.

After she was finished with my upper body, I was motioned to lay on the table.

In Canada, we would have a towel covering our bodies to make us feel more comfortable, not in India.

For this massage in India, I was laying out in all my glory as she massaged away kneading the oils into my pores.

For some strange reason she kept massaging my breasts. I didn’t quite know how to react, but I figured it must be an Ayurvedic thing.

Sure enough, when I looked it up after my massage, I found out that Ayurvedic breast massages are a thing and they are very good for maintaining healthy breast tissue.

Luckily I wasn’t too concerned, so I enjoyed the massage without tensing up. I couldn’t ask her anything since she didn’t speak English, so I just went with the flow.

The massage was heaven.

She applied just right amount of pressure mixed with the perfect blend of soothing motions to relax my mind and body.

I started to go into a trance. The fluidity of her movements seemed to happen in a regular beat and I found myself going completely blank without a though in my mind.

This went on for one hour.

After she completed her work, she tapped around the center of my bellybutton several times, folded my arms over my chest and covered me with a towel.

She then told me to stay.

I couldn’t believe how relaxed and centred I was, I could never have lay on a vinyl table for 5 minutes without squirming had I not just received a relaxing treatment.

After she came back in, I thought that she would tell me that I was finished and send me to the shower to rinse off.

Instead she beckoned me into the bathroom, put shampoo in my hair and washed off the oil, with scoop after scoop of hot water.

It has only been a week, but I forgot how good hot water felt on the skin. The guest houses we had been staying at didn’t have hot water. We were showering in cold water each day.

She gave me a bath from head to toe and cleaned me up good.  Working so very hard.

Scooping all of that water and scrubbing away the oils is a tough job.

As I said, she didn’t speak English, and I had no idea what was going, so I just went with the flow.

After walking home, we thought that we would go out for dinner, but after reading and catching up on a little writing, we felt the affects of the massage and an extreme feeling of fatigue came over us both

As Dave said during our walk back to our guest house, “Was that as awkward for you as it was for me?” “I feel like I should have bought him a drink or something!”

Yep, Dave is filled with the one-liners. But it is true. This massage was more invasive than a massage we’d have in Canada or at a five star resort. Usually the masseuse is very careful to keep you covered and to avoid any private areas.

In this massage, they weren’t being offensive or upsetting, they were just being open and doing their job. I never felt like they crossed a line, it’s just a different culture.

Tipping at a Massage

I don’t know if we were supposed to tip at an Ayurvedic Massage centre in Alleppey because they are considered therapudic massages. But we tend to tip.

It is hard to find information on tipping guides and masseurs, etc., but old habits die hard.  In Canada, tipping is widespread and we are conditioned to do so.

I also feel that the actual workers don’t see much of the money that we spend on activities such as this, so a 50 rupee tip will probably help to make the job worth their while.

We had the best nights sleep we had in weeks.