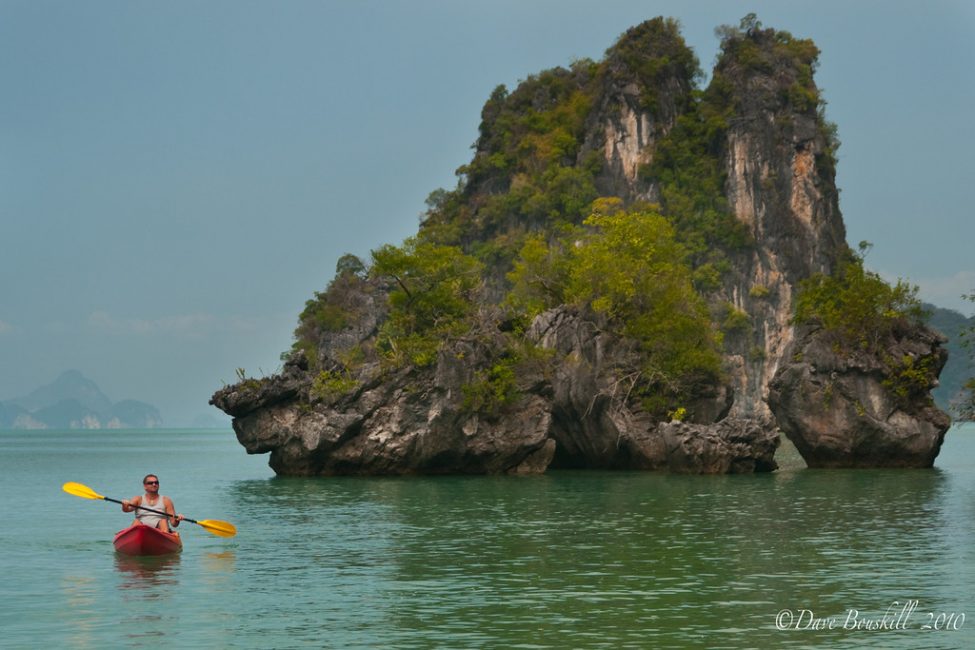 We always wanted to go camping on a private island and go Sea Kayaking in Thailand.  With John Gray Sea Canoe, we had the chance.

After a splendid day kayaking through tidal caves and into island lagoons, we were let off in the dark of night to be paddled to our private beach where we would spend the night.

Our camp was waiting for us as we paddled in with our gear and guide Natt.

Alan, a young apprentice had spent the day preparing camp and setting up our tents.

Towels and cold water were waiting for us by the roaring fire and once we settle in an icy cold beer and campfire snacks were brought out for our enjoyment.

We spent the night trading stories and walked over to the beach to check out some more luminescence plankton glowing in the water of the Andaman Sea.

It was early to bed as it had been a long day and we had even a bigger day ahead.

The islands aren't quite as secluded as they used to be and we awoke to the engines of longtail boats roaring by out in the bay.

After eating a feast big enough for a group of 10, but only to be consumed by our tiny party of tow, we readied ourselves for our day with John Gray.

As Alan stayed back to finish up at camp, Natt took us out to explore some more sea caves.

Today we had the chance to paddle our own canoes and we followed Natt through the choppy waters to our first cave of the day.

It was a little intimidating to be navigating our own boats.

The cave roof was low and we had to push ourselves through the limestone with our hands as we laid back in our kayaks.

Once we emerged from the cave, we were treated to yet another spectacular view.

High limestone cliffs reach up to the sky surrounding the entire lagoon.  These hollow openings known as Hongs can be found in the centre of islands all over Thailand.

Most of them can only be reached at low tide through sea caves.  Nat told us that we had about an hour before high tide. We explored the Hong quickly to have a look around.

We had seen several Hongs the day before on the John Gray regular day trip, so we were excited to be out paddling on our own today.

When we came out to open water, we were greeted by John and an intern studying with him from Holland.

We paddled on to another sea cave and entered an even tinier opening. Following Natt's every move, we crawled along careful to not cut ourselves on the stalactites hanging close to our heads.

The four of us sat in the lagoon for a while and talked about the environmental issues that Thailand is facing.

Many tour companies allow and even encourage tourists to sit on the fragile mangrove tree routes.

They make loud noises shouting and bringing their engines into some navigable bays scaring off wildlife and they throw their litter into the water.

John Gray Sea Canoe uses only glass bottles and recycles, they don't let anyone take anything from the lagoons and they don't allow people to touch or disrupt the natural environment.

Alan told us privately that he worked for another guide company for a few years, but came to John Gray because he cares about the environment and he wants Thailands future to be clean and protected.

After spending a little too long in the Hong, the tide has risen and both of us are a little freaked out having to paddle through the swelling water in the caves.

We tell ourselves that we are paddling with the world's foremost expert on Tidal Caves and sea canoeing, but that doesn't put your mind to rest when the water is filling up and you are laying on your back pulling yourself along the roof of the cave to make it out to fresh air.

In my controlled panic, I manage to keep it together but cut myself up a bit from the sharp rocks.

John and Natt seem unphased by it all, but we are happy to be back out in open water.

The large longtail boat is waiting for us to take us to the next island. Today is a completely different experience as we are heading to all the places that the tour boats don't stop at.

These are some of John's favourite locations in the area and the only other people we see is a catamaran and some fisherman.

I love traveling by longtail boat.

The weather is perfect today as the sun is shining, there isn't a cloud in the sky and the breeze is pleasant.

We spend the entire morning paddling and exploring different caves and then we stop for yet another feast made for 10 people but only to be consumed by our party of 3.

John tells us tales and some of the most extraordinary moments in his life.  He has lived a rich life in his 66 years.

Decorated with awards and accolades he could be living the high life in Hawaii, instead, he lives a humble existence giving back to the people who work for him.

Being an environmentalist and activist doesn't make for the most lucrative of lives, but he certainly has left a legacy for everyone to follow and he definitely hasn't thrown his hat into the ring just yet.

Looking for a place to stay in Bangkok? Check out our post on

Where to Stay in Bangkok – A Guide to the Best Neighborhoods