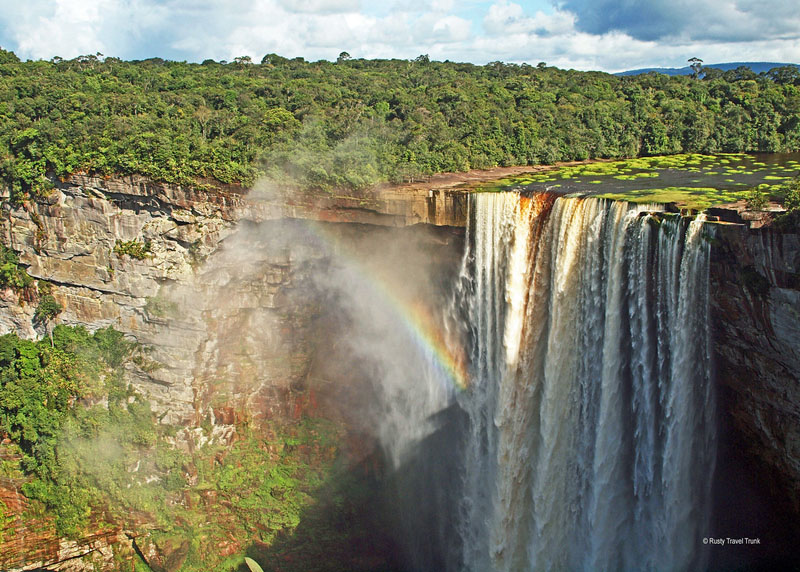 Many thousands of feet in the air, as I contemplated the piece of shiny silver duct tape adhered to the side of the puny plane soaring above dense rainforest, I started to wonder if I should have taken survival classes after all. Between the tape and being weighed for the flight right before the six of us ate our tour-provided lunch, I wasn’t feeling very secure.

But since I didn’t have five extra days in my itinerary to trek, this flight was the only way to get to my destination. On top of that, I was supremely lucky to even get on this rickety flight. So instead of freaking out, I took a deep breath and threw my life into the hands of Lady Luck. 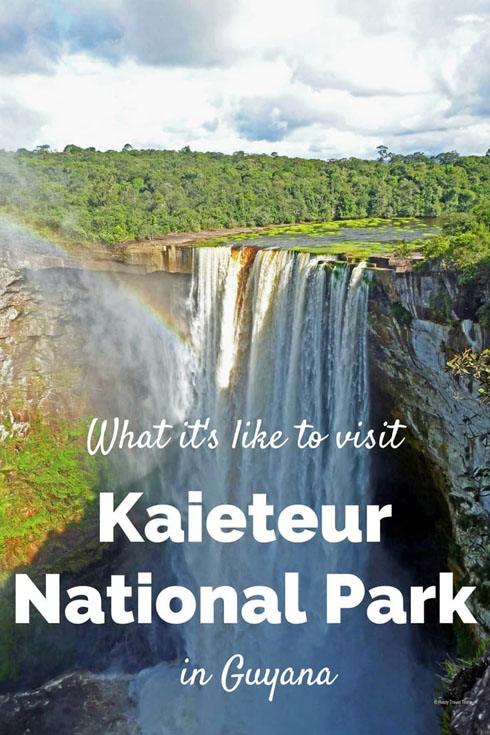 Why I traveled to the rainforest in Guyana

One of the main reasons I ventured into the rainforests of Guyana was to witness the awesomeness of Kaieteur Falls, an 822ft single-drop waterfall. While there are taller falls in the world, very few have the same combination of height and water volume, making Kaieteur one of the most powerful waterfalls in the world. I had to see it. 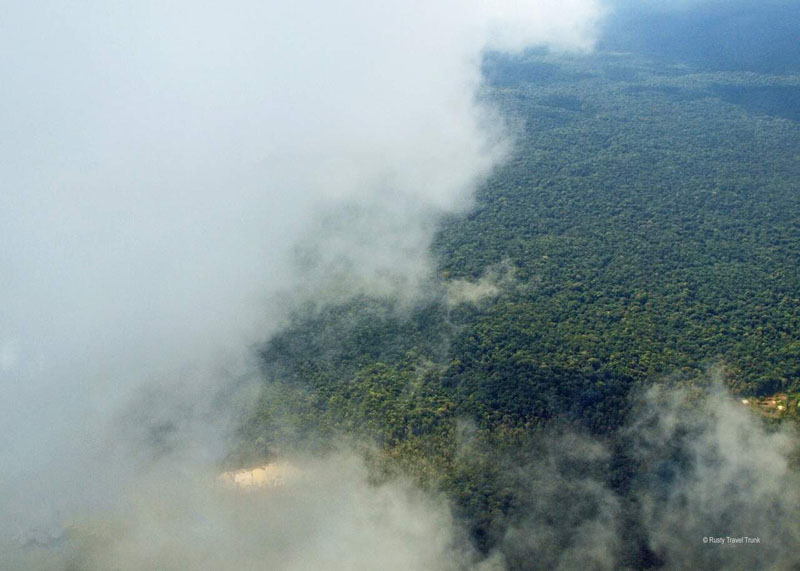 If you did a random survey of people’s travel history, the likelihood of someone having been to Guyana is very slim. Which is unfortunate because the country has absolutely gorgeous and unique flora, fauna, and landscapes. As a nature buff, Guyana appealed to my sense of adventure and a part of me that thinks I must have been a jungle explorer in a previous life.

Which would explain why I grew up loving the old computer game, The Amazon Trail. On this trip to Guyana, my game-inspired goal was to photograph a rare species: the tiny Golden Frog.

Read: A Journey Down the Peruvian Amazon in Photos 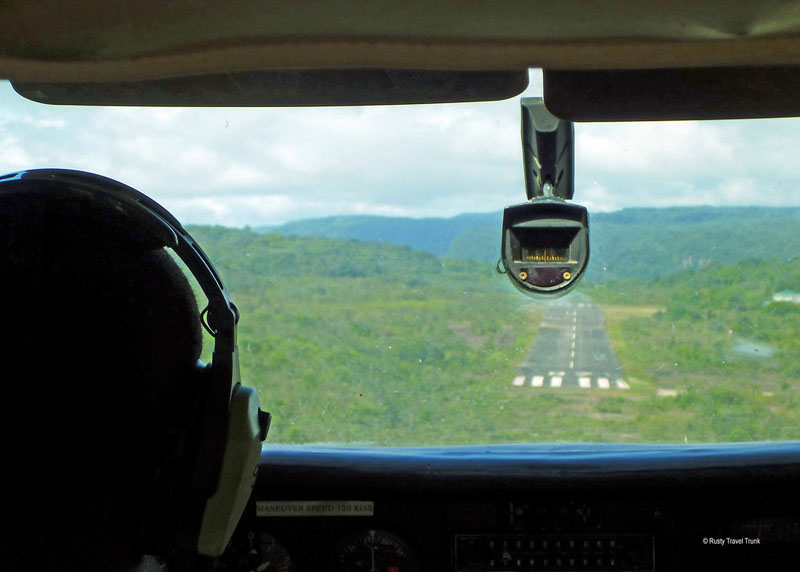 Getting a flight to Kaieteur Falls is an adventure in its own right. I met a pair of travellers who had been trying for five days! Luckily for me, I found out through a tour company that there was an American couple who had chartered a flight for themselves but were open to others joining them to cut back on the cost. Normally, it takes some doing to get a flight as tours run only when there are enough people to fill a six-seater plane (unless you’re Ms. Moneybags and rent the whole plane yourself). Some travellers just go to the airport and hang around hoping to get a spare seat on someone’s flight. 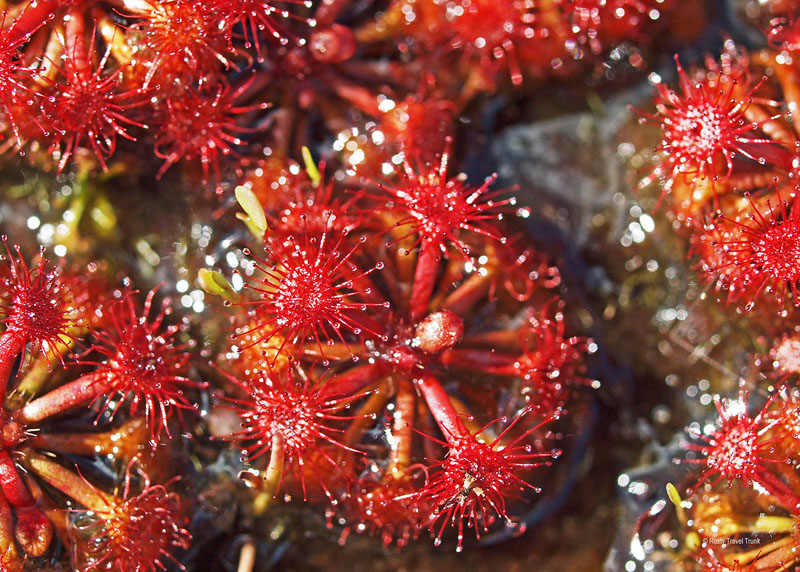 On the day of the tour, the organizers were about three hours late. Thank goodness for my sanity, the flight was still allowed to leave that afternoon. When the Universe gives, I take with both hands, smile, and run.

But as I eyed that piece of shiny duct tape after we lunch-heavy folks clambered aboard the puny plane, I started to wonder if the Universe was actually trying to tell me that my quest to see some falling water and a two-inch frog wasn’t actually worth my life.

Read: Airlifted from the Amazon: Our Worst Travel Fears Realized 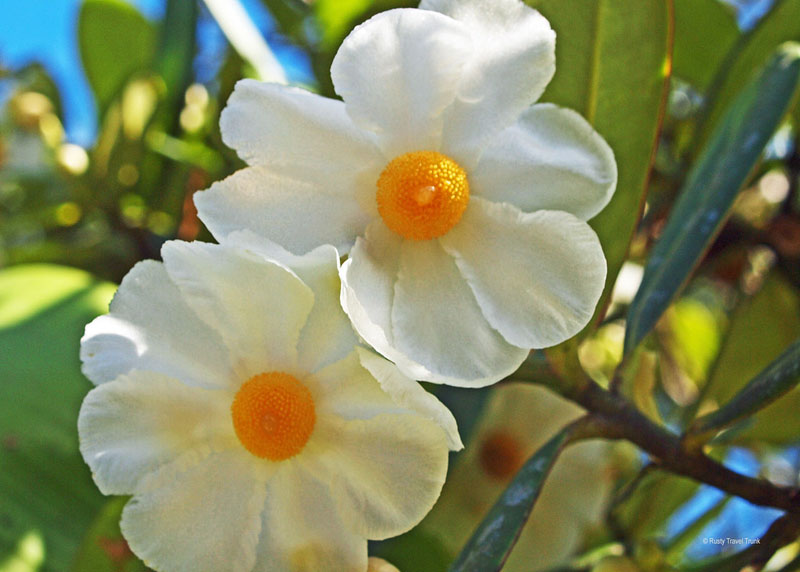 Arriving at the park

It was about an hour’s flight from Georgetown to the Kaieteur National Park, 627 square kilometers large. Once I decided to studiously ignore the duct tape, it wasn’t long before I became engrossed by the passing scenery – dense rainforests as far as the eye could see, deep green periodically punctuated by a pretty pink flowering tree or by grotesque scars made from Guyana’s mining industry. 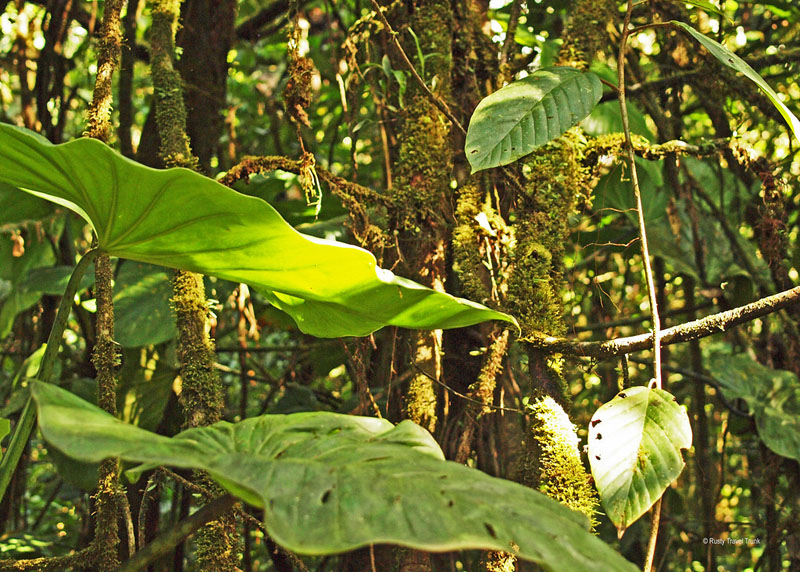 When we landed at the park, our pilot went into the Visitor Centre and promptly came back out; it turned out that there was no one actually at the Centre. In fact, as far as we knew, there was no one at all in the park! We had an entire national park all to ourselves! It was fantastic. 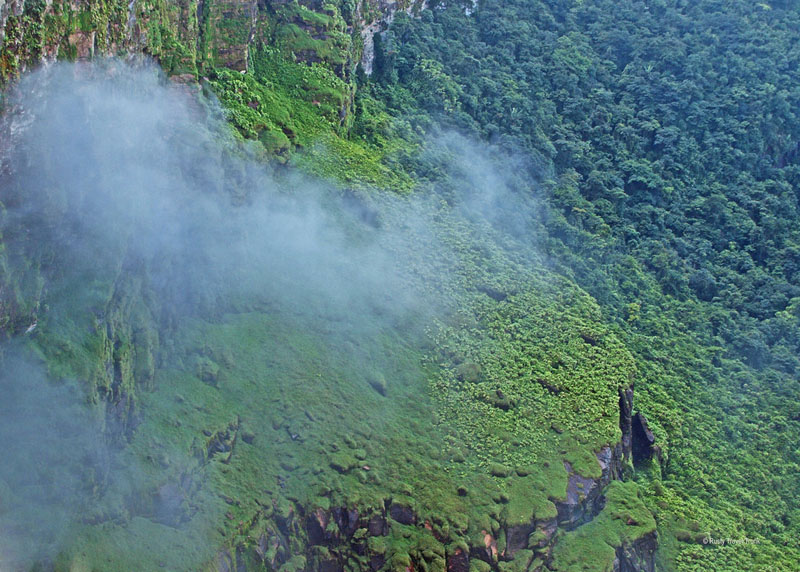 The walk to the falls was fairly tame as the path was groomed. It wound its way through the rainforest, periodically spitting us out to various scenic points that allowed us to see that we were getting closer and closer to our goal. There are no guardrails at the various lookouts so this really was “look here at your own risk”.

And of course I grabbed risk in both hands and peered over the various edges whenever possible. Falling would have sucked though – assuming one survives the long drop, there is a distinct impression that there are things down there waiting to eat you…

Read: 11 Fun and Unexpected Things to do in Iguassu Falls 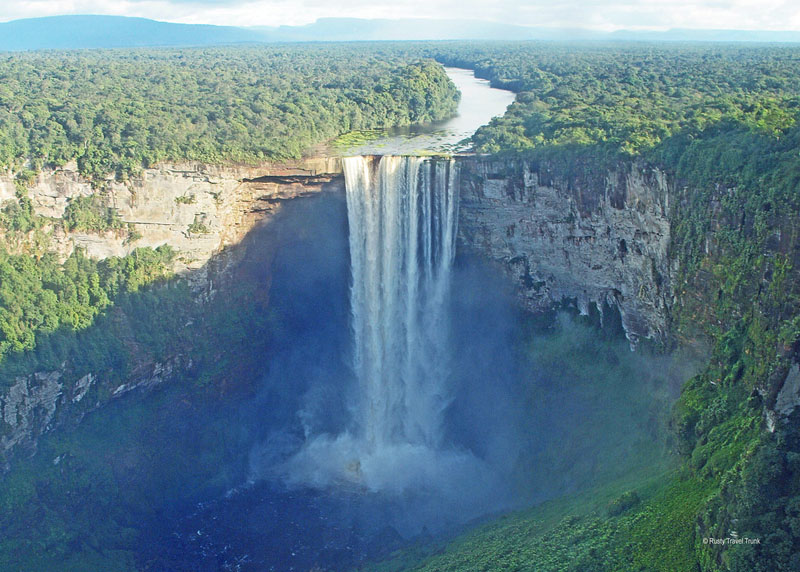 Soon enough, we reached the top of the falls. Standing up at the edge was mind-blowing, watching the water wind its way to the falls and thunder down into the valley. There was even a natural ledge that jutted out over the falls where one could walk and/or sit, depending on vertigo susceptibility.

As we watched the waterfall, we noticed that there was a depression behind the curtain. Our pilot-cum-guide explained that there was a cave back there and entry has been traditionally forbidden due to its sacred nature. Looking at the thunderous falls, I wasn’t sure how one could even get back there! 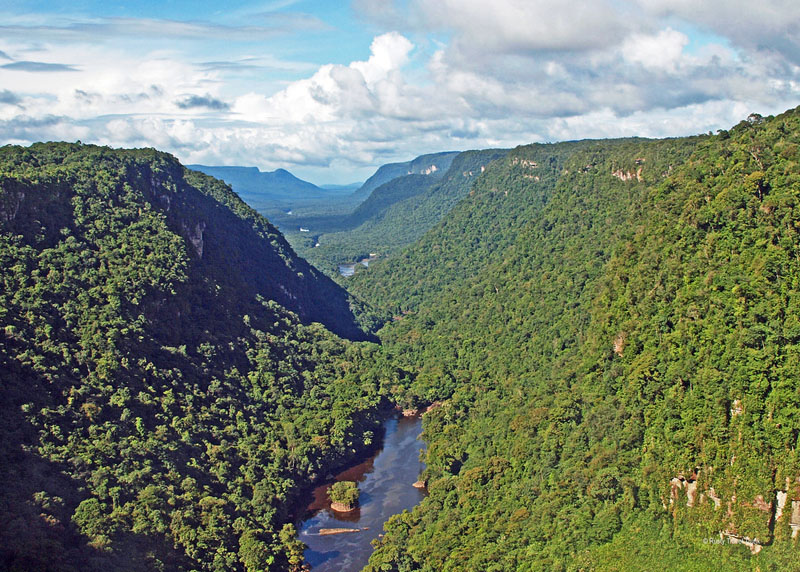 I ended up not needing to break out my computer game bush whacking skills to find the Golden Frog. This tiny yellow amphibian lives its whole life in Large Tank Bromeliads that are fairly common near Kaieteur Falls.

After peeking into a few, it wasn’t long before I found one. It was rather anti-climactic since it really was just looking inside a giant plant instead of some expedition-style drama. Ah well – I was excited to have fulfilled my quest, anyway.

Read: 20 Not to be Missed Animal Encounters From Around the World 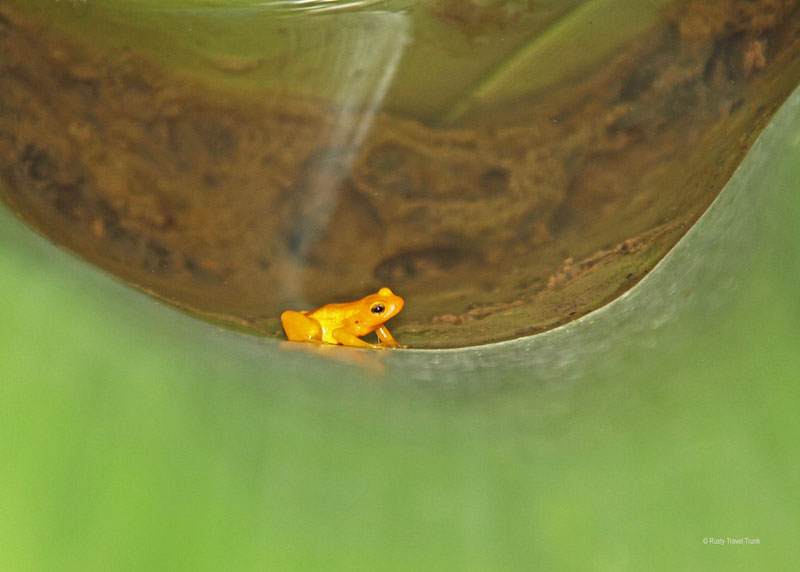 Visiting Kaieteur National Park was ultimately a fantastic afternoon of exploration. To me, this park summarizes Guyana perfectly – amazing landscapes, unique flora and fauna, and very few visitors save for a few hardy eco-tourists. I believe that Guyana has a great future ahead in eco-tourism and now is the time to go before it gets busy! 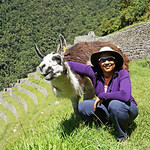 About the author: Kendra considers herself to be a cubicle escape artist: she tries to find ways to keep her job (which is in a cubicle) while also trying to escape it as often as possible. When she travels, she’s generally that solo female you see wandering with a camera firmly clutched to her face as she traipses around, narrowly avoiding being hit by some form of local transportation. You can find her adventures at her blog, Rusty Travel Trunk, Instagram, Pinterest, and on Facebook.

Top 5 Must See Cities in Colombia