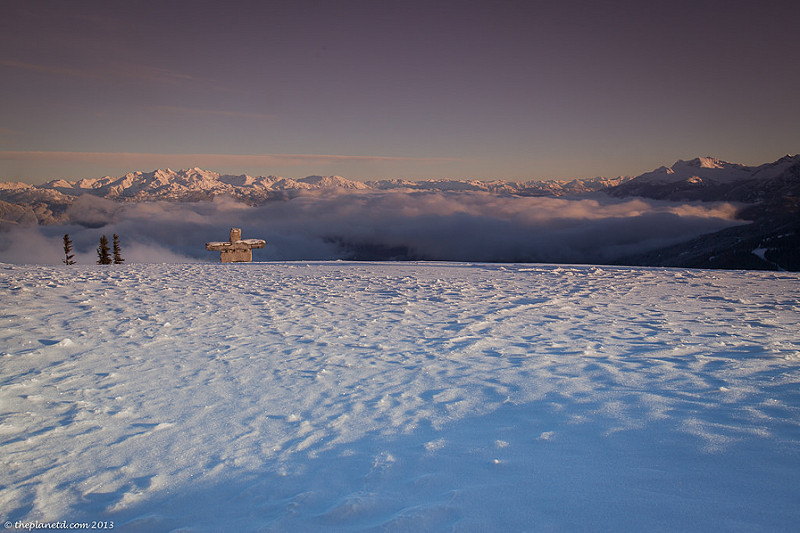 As we picked up our gear at Whistler Blackcomb for our week of snowboarding, everyone in the shop asked us if we would be doing Fresh Tracks.

After figuring out exactly what Fresh Tracks was, we made up our mind to give them a try at least once during the next 5 days of boarding. (we ended up doing fresh tracks in Whistler twice)

We bought our ticket in advance and two days later we were lining up for our first run on fresh tracks.

Fresh Tracks costs $20 and must be bought at least a day in advance. You can use it any day you want for up to a year.

This does not include your lift ticket which you must have to get up the gondola in the morning.

What is First Tracks?

First Tracks aka Fresh Tracks is that heavenly feeling of being the first group up the mountain before the ski hills officially open.

Those who purchase fresh tracks tickets get on the hill before everyone else and have the opportunity to skiw down a run with nobody else in sight.

We wanted to experience that!

It was day two of our snowboarding adventure in Whistler and we decided this was a good day to get up early and give Fresh Tracks a try.

Tip for Fresh Tracks in Whistler

Do not leave your boards with the ski valet at your hotel. Make sure you can access them early.

Instead of leaving our boards with the ski valet at the Westin (no ski or snowboarding gear is allowed in your room), we checked them with the bellhop the night before.

The ski valet doesn’t open until 7:00 am and we were told to be in line for First Tracks by 6:45 at the latest.

The website recommends to be in line between 7:15 and 8:00 am, but the guys at the Whistler/Blackcomb gear shop told us that it fills up quickly.

They were right! Getting in line early is worth it.

We arrived just before 7:00 am and there was already a crowd forming.

Only 650 people allowed on First Tracks

During peak season, you may risk missing Fresh Tracks if you are late because only the first 650 people are allowed up.

We weren’t in any danger of that today, there was a queue, but it was a small queue.

So, with fresh coffee in our hands, we joined the morning line up, got to know our fellow early morning risers and waited for the gondola to open.

Arriving at the top of Whistler Mountain

The morning sun over the Rocky Mountains is beautiful! We arrived at the top of the gondola to a spectacular sunrise over the snowcapped mountains.

The air was brisk and cool, but the sky was clear and blue.

We snapped photos of the scene before giving heading into the chalet for an enormous buffet breakfast.

Breakfast on the Mountain

The Whistler Blackcomb team had told us that Fresh Tracks was worth it alone for the amazing breakfast and they were right!

Nobody is allowed to simply go up the gondola and start skiing, you first have to get your nutrients and caffeine fix for the day.

We overloaded our plates with everything.

We didn’t really need all that food, but when it’s put in front of us, we can’t help but load up.

From waffles to pancakes and bacon and eggs, we ate it all. There was yogurt and bagels, fresh fruit and oatmeal.

We were thoroughly stuffed by the time the horn went off to signal the opening of the slopes.

Eat Fast to be first!

Arriving early had its perks because we had finished our breakfasts and we were strapping on our boards while other fresh tracks lovers were still riding up the gondola.

We were carving through the slopes with barely another soul in sight.

We really only had an extra half an hour before the gondola opened to the general public, but being up there for fresh tracks, actually gives you the opportunity to do several runs free from crowds.

It’s more than just one hill free from crowds

Because we took off a half hour ahead of everyone else, we skied down empty hills for ages.

We were one step ahead of everyone most of the morning!

Once we reached Harmony Bowl, we were first in again and we had the added bonus of being the right time of day when it was bright and sunny.

It was an incredible morning as we discovered new trails and routes that we had all to ourselves.

We had only been snowboarding once before in Whistler (and that was yesterday) so we made many wrong turns that led us to one spectacular view after another.

We could have kept our noses to our trail maps and stuck to our plan, but instead, we simply followed the wind.

There are 200 trails to choose from on Whistler Blackcomb so the sky is your limit.

We zipped down steep runs, got stuck on flat slopes, made a misguided choice which landed us in a field of moguls until we found our way to some leisurely scenic slopes.

At times we simply sat and stared out at the horizon or watched other skiers zoom by.

We played hard all morning long and by the time we stopped for lunch, we lost count of exactly how many runs we actually did.

We could have called it a day and been completely satisfied with our morning on the mountain, but we were here to ride and ride we did.

We didn’t stop until our legs were numb and our smiles were frozen on our faces.

I use this phrase a lot when I talk about Whistler, but there’s no tother way to put it…”We had a blast!”