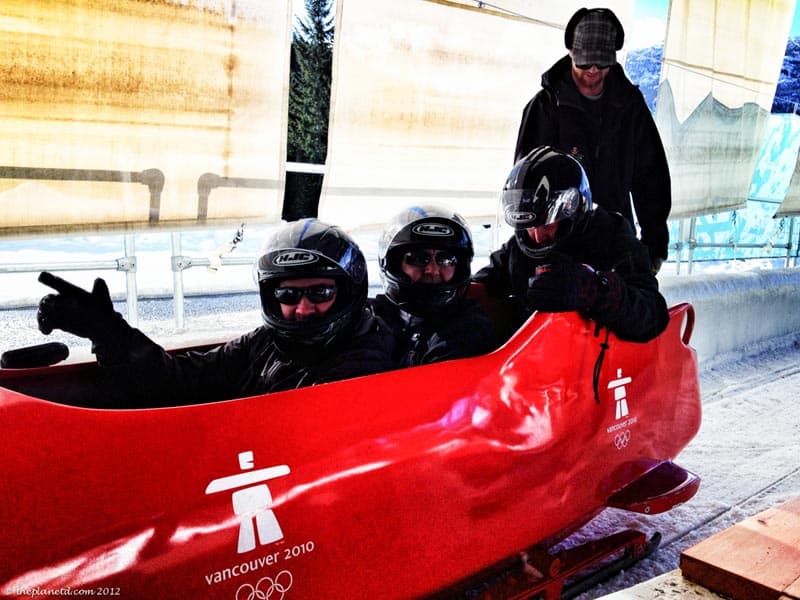 Have you ever wondered what it would feel like to be an Olympian for a day? When you bobsled in Whistler you'll get to fulfill that dream.

Dave gets ready for his whistler bobsledding debut

Imagine the thrill of speeding down the track just like the Olympic athletes of 2010. With former world class bobsled drivers at the helm, we had a once in a lifetime opportunity to shoot down the down the fastest Bobsled track in the world reaching speeds of 125 km per hour.

You don't need any experience or training, just a little bit of guts and a zest for adventure is all that's required to bring home an everlasting memory from your travels.

We arrived at the Whistler Sliding Centre with eager anticipation for the ride ahead. We didn't quite know what to expect and had visions of falling down while trying to jump into the bobsled at the start of the course. 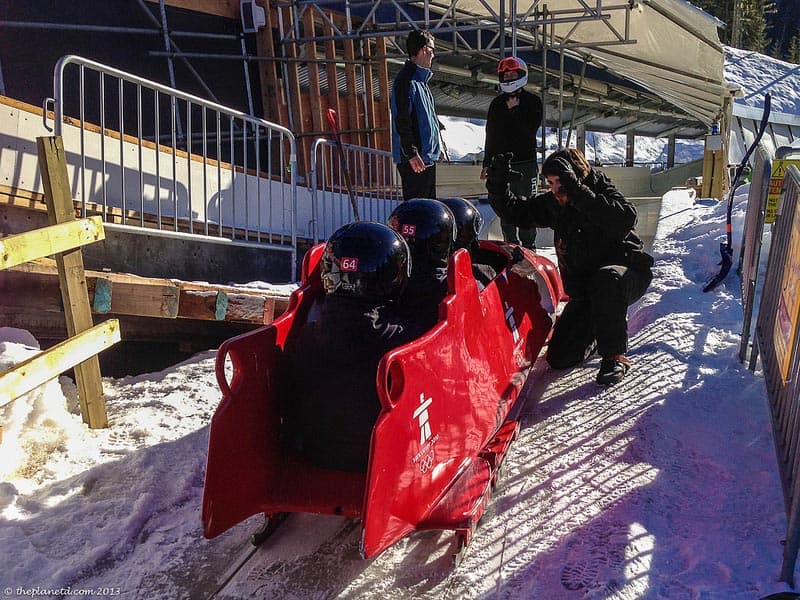 Getting our bobsleigh instructions

As we quickly found out during our half hour briefing session, we weren't going to be running along while pushing the bobsled at the start of the track. It would be impossible for amateurs to successfully squeeze four large bodies into this tiny coffin like tomb, so instead, they had us sit one by one in an orderly fashion before having a staff of two people push for us.

This isn't a makeshift bobsled course designed for tourists only. There are no tracks holding the sled on course it's a track made of ice and a smooth fibre glass sled whizzing down a winding course for 45 seconds of pure adrenaline.

It's a far cry from our Jamaican Bobsledding experience, but we were reminded of it when we found out that Pat Brown, the coach of the Jamaican Bobsled team of 1988 is one of the drivers at the Sliding Centre.

That story went on to be featured in the movie Cool Runnings starring John Candy. 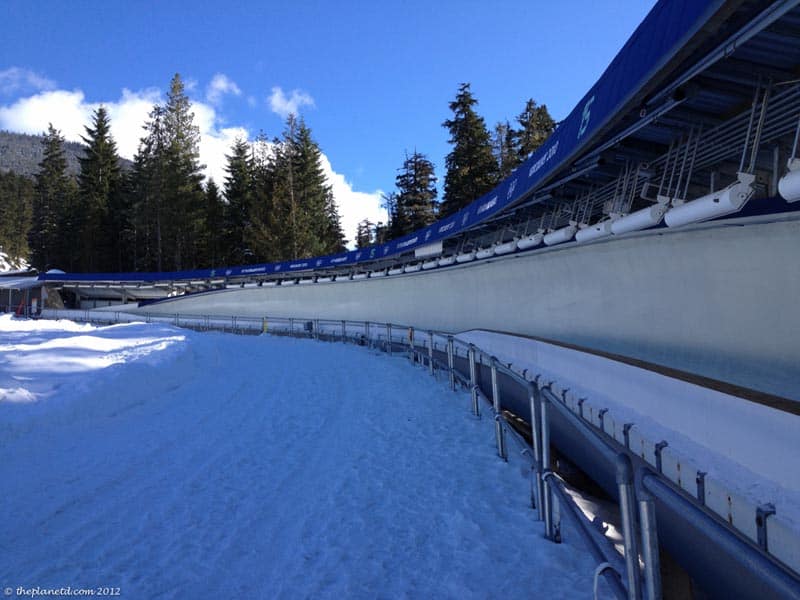 The Whistler sliding centre is one of only 15 competition sliding tracks in the world and athletes train and prepare on this track on a daily basis during the winter months.

However, for a couple of hours each day, the Whistler Sliding Centre closes down for training and opens up to the public.

You have your choice of skeleton or bobsleigh and anyone over the age of 18 and in good physical condition can take part. 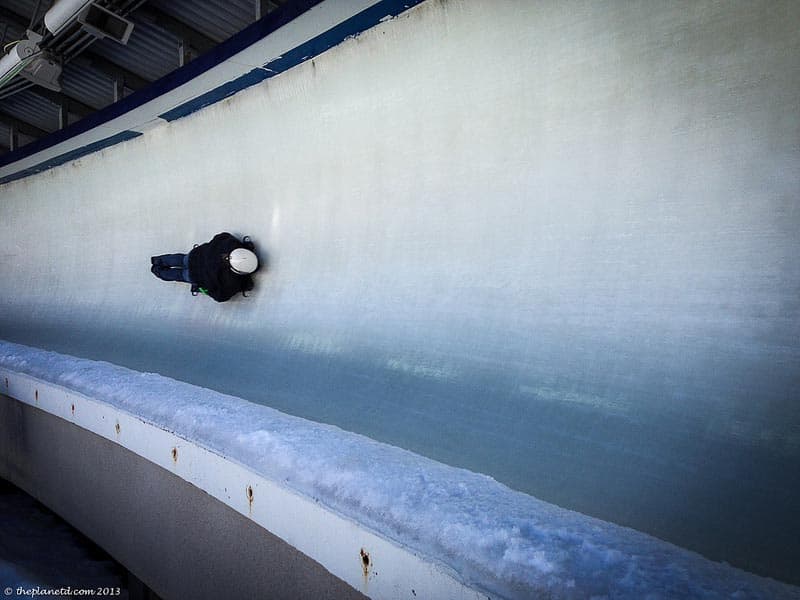 You can do the Skeleton instead

We arrived just as the public skeleton was finishing and needless to say, it looked a bit intimidating. The skeleton doesn't reach the speeds that the bobsled does, but you are on your own and there is nothing between you and the ice but your winter coat and a helmet! 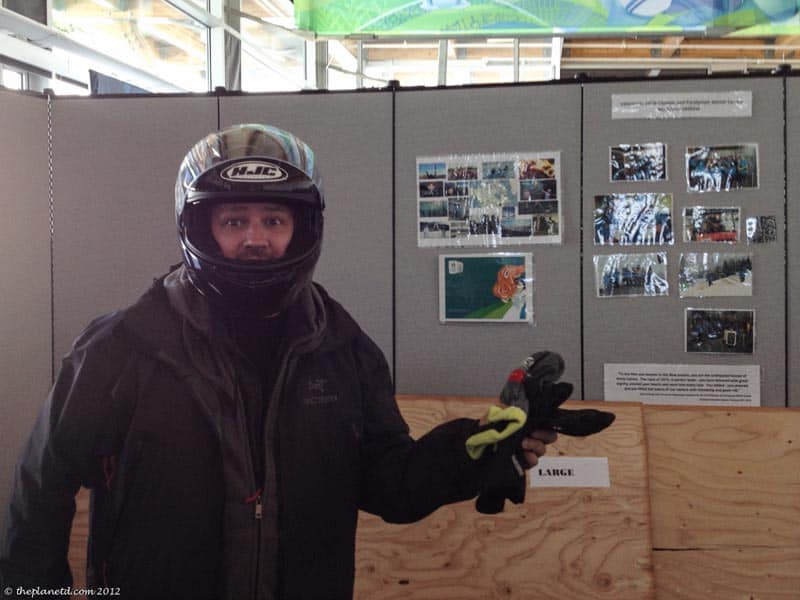 Signing our lives away

After our briefing and gathering up our helmets, we took a short shuttle to the start of the course. The public bobsleigh only uses 1/3 of the course compared to what the professionals do, but that's all you need. 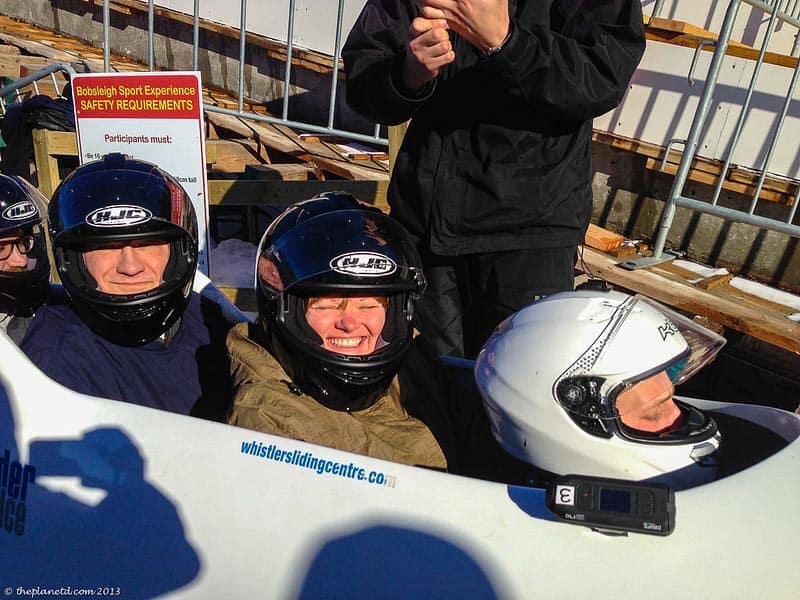 We were told to sit back and hold on tight. If we made the mistake of putting our head forward, we'd be stuck hunched over the entire ride as the g-forces would keep you down and you'd miss seeing all the fun.

I made sure to take a strong stance with my head up while leaning back. I didn't want to have my head shoved down to the floor of the sled for the next minute of my life.

Once we were loaded in, we were off in a matter of seconds.

What Does is Feel Like to Bobsleigh in Whistler

The experience was amazing. We it took a couple of seconds to accelerate giving us the chance to settle in, but once we rounded the first bend, we were sliding full tilt boogie and you could instantly feel the pressure on your helmet.

It felt as if a solid concrete block was pushing down on your head forcing you into the seat. 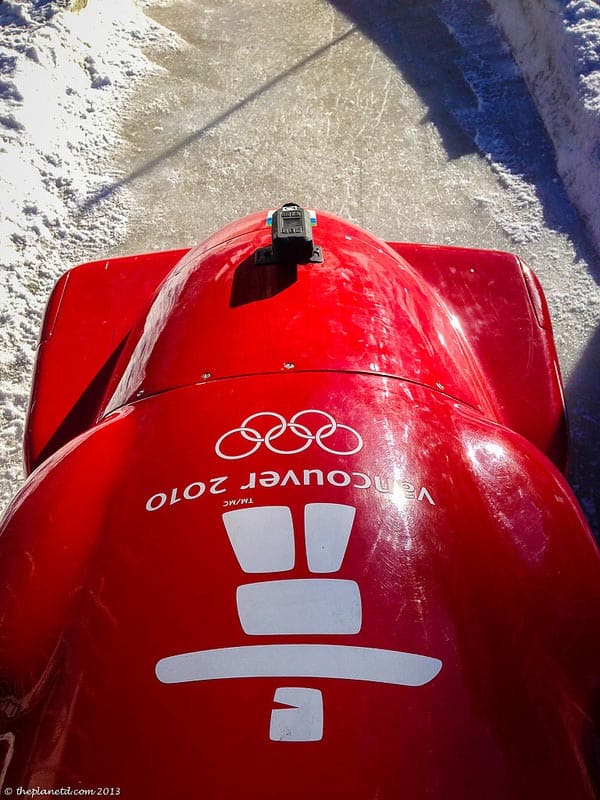 By the time we hit the 10th and final bend of the course, we had reached our fastest speed. It turns out that our team had the fastest time of the day reaching an impressive 126 km per hour.

Dave was a distant 8th but like all bobsledding races, the distance is measured by mear nanoseconds. He was less than a second behind us!

To find out more about the Public Bobsled Experience, visit the Whistler Sliding Centre Website cost is $159 per person and to order a video it is $20