The World Can Learn a Thing or Two From Canada

This year,  Canada made history. No we didn’t win an unprecedented amount of medals at the Olympics and we didn’t have an earth shattering election outcome, but we did make a mark in history that will never be forgotten.

While our neighbours to the south suffer scandal after scandal and the world seems more divided than ever, Canada came together as a nation to watch a rock concert.

This wasn’t just any rock concert. This was Canada’s band, The Tragically Hip.

The CBC, our national broadcasting network pre-empted their primetime coverage of the Olympic Games from Rio to play the Tragically Hip’s final concert live from Kingston, Ontario for the entire nation. They gave up millions in revenue and ad space so that Canadians could say goodbye to their most beloved band. This may well be The Tragically Hip’s final concert ever.

You see, it’s not a publicity stunt for The Hip to try to make a few more bucks saying that this is their last hurrah to fill seats. This is a concert event for a poet to go out the way he wants, doing what he loves.

Interested in Learning More about Canada? Check out the Great Canadian Word

Gord Downie, the lead singer of The Tragically Hip was diagnosed with Glioblastoma this past December.

Glioblastoma is an aggressive form of incurable brain cancer that generally claims its victims in less than a year.

Instead of quietly succumbing to the disease, The Tragically Hip rallied for one last hurrah going out in a way that only great Canadian icons can. They toured.

When Downie went public, he started the Gord Downie Fund for Brain Cancer Research to raise much needed funds for cancer research at Sunnybrook Hospital in Toronto.

The research will help patients at not only Sunnybrook, but across Canada and around the world.

You can donate to the cause here: Sunnybrook Foundation

After Downie finished up his surgery, chemotherapy and radiation, the Tragically Hip hit the road to play an emotional cross-country tour starting in Victoria, British Columbia playing to sold out crowd after sold out crowd.

I watched on social media as friends shared their stories of The Hip and prepared for teary eyed concerts for weeks leading up to the final event broadcast on The CBC for the entire country to have a chance to witness history in the making.

Last night was the Tragically Hip’s final performance in their hometown of Kingston Ontario. They decided to end where it all began.

Downie thanked the fans for coming and commented on how they played their first concert in Kingston. Downie said “We started here, as you know, and opened up to 13 people.

And at our next show, we had 28. And the next after that, we had six.” Cheers to The Tragically Hip, you’ve come a long way baby.

The Kingson K-Rock Centre only only holds 6000 people but it was a fitting venue for their final farewell.

They had an entire country watching their every breath.

More than 20,000 fans gathered outside the arena to watch on the big screen while the rest of Canada watched from various locations.

We saw people sharing on social media from Vietnam (Hi Jason), watching in their backyards, some people projected the concert on building’s walls, on big screens in Toronto and from bars around the country.

Dave and I watched it with my mom and dad in their big screen TV at home with full surround sound. It was perfect.

My parents didn’t know much about The Tragically Hip. I wasn’t even sure they would be interested in watching.

But as the concert went on, they noted how much they enjoyed their music.

Dad commented that he sings like a folk musician and mom was in awe that he is fighting his battle doing what he loved. The Tragically Hip’s music always has a profound affect on everyone.

Dave and I have been listening to The Tragically Hip for 26 of their 30 year career.

I was introduced to The Hip by my housemate in college around 1990. Before coming to Sheridan College where we studied Music Theatre together she got her theatre degree at Queens’ University where The Hip was a popular college band playing to the university circuit.

They had broken big in Canada by the time Dave and I met in 1991 and have been the soundtrack of ours and most Canadian’s lives ever since. 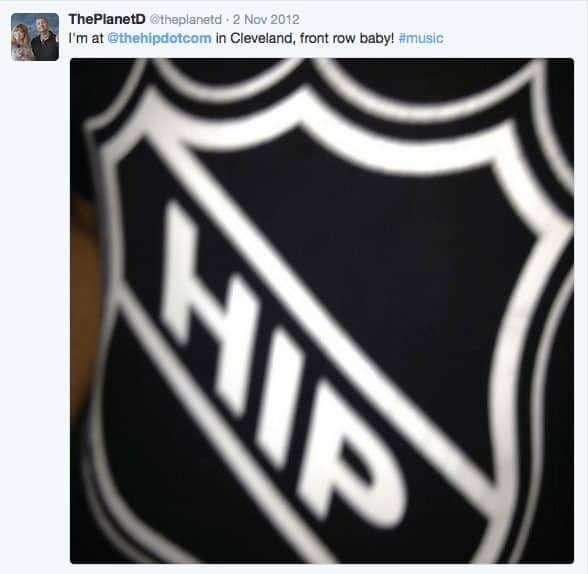 We’ve seen them in concert at festivals a couple of times and a couple of years ago, my friend Kelly became a fan and invited me on a road trip to see them in Cleveland.

It was small crowd and I was excited, but I was quickly disappointed that they went into their deep tracks singing a mellow set that left me flat.

Last night’s concert gave me everything I wanted. All their hits and more. Energy, excitement, and poetry. It was the ultimate Canadian experience.

My mom and dad loved the concert and couldn’t believe that the CBC dedicated so much time commercial free to a band.

The Olympics were still going on live, but Canada took a break from the games to celebrate from within.

Even in Rio, our Olympic athletes gathered at Canada House on Copacabana Beach to watch the festivities with longtime broadcaster Ron McLean who interviewed Justin Trudeau via satellite before the concert.

Our Prime Minister attended the concert like a regular person and fan of the iconic band.

Clad in a jean jacket and a Tragically Hip T-Shirt he talked to Ron about “how all week he wished he was at the games in Rio, but how tonight he was glad he was in Kingston instead.” 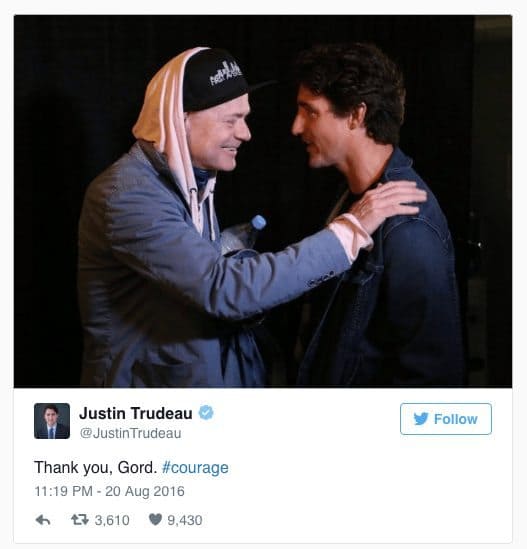 He walked through the crowd like the rest of us eating poutine and taking selfies with fans and he grew emotional when Gord Downie thanked him for coming.

He didn’t detract from the event as some people feared, he added to the event.

We marvelled at how a leader of a country could attend a public event and watch from the centre of the action free from incident.

I don’t think this could have happened anywhere else. No world leader would be clad in a jean jacket with a concert T-shirt on taking photographs with other Hip lovers as he walked through the crowds.

He was embraced by the crowd, by Canadians and by Gord Downie himself who thanked the Prime Minister for coming and said “Prime minister Trudeau’s got me, his work with First Nations. He’s got everybody. He’s going to take us where we need to go” We’re in good hands.

As Americans riot at political rallies, Canadians sing and cry together en masse celebrating what we love about this country.

Our unity. As the world is more divided than ever, Canada proved that one nation can stand together to celebrate greatness.

Gord Downie is a poet, he is the Shakespeare of Canada. He hits a chord in our hearts.

Singing lyrics about Bobcaygeon, Bill Barilko, The Hundredth Meridian where the great plains begin, that famous goal in Seventy Two, and of course the Late Breaking News on the CBC.

Enjoy Listening to Bobcaygeon on Spotify

With each song, my eyes welled up. Not necessarily because of his tragic disease, but because of my great pride in my country. I don’t think I have ever been more proud to be Canadian.

This is a band that is all ours. Sure, people around the world have heard of them, but The Tragically Hip sing about things that only we Canadians can understand.

We’re in on the private references to Canadian nostalgia. And nobody else gets to have that. No matter how much of a fan you are, you can’t relate to our “High school’s walls hung with our parent’s Prime Ministers” or “You were loosening my grip on Bobby Orr.”

Canada Pride and a Nation’s Identity

30 years ago, Canada lacked national pride and identity. The Tragically Hip formed 30 years ago and they have led the way for a generation to find their identity and to develop into a country that the world looks towards to guidance.

We aren’t a super power invading countries for their oil, we aren’t a financial hub making money off of refugees, we aren’t building mega cities from dust to prove something to the world. We are simply Canadian.

We welcome the less fortunate across our borders with hope of them gaining a better life.

We encourage cultures to keep their identity and value diversity. We apologize uncessarily and we are a nation where people can randomly bump into our shirtless Prime Minister out for a hike in the woods with his family.

Canada is “Ahead by a Century”…Come on world, join us!

Listen to Ahead by a Century, The Tragically Hip:

Even in the Olympics when Japan bumped our racewalker, Evan Dunfee, causing him to lose the bronz medal, Canada won an appeal to have him disqualified.

Dunfee was awarded the bronze medal only to have Japan lobby again to take it back. Dunfee could have rallied back, but he responded, “This isn’t the way I want to win a medal” We’re just so darn good!

Read more about Canada at: Canadian Stereotypes and Misconceptions

Dave and I were just in the United States during some of the Olympic coverage and we saw how the U.S. media tore down American gymnast Simone Bile for a stumble on the balance beam.

The headline was how one stumble could cost her millions. Newsweek stated how she just lost her chance at creating history and it was not the colour Americans wanted. Come on! She won four golds and one bronze, that is something to be celebrated!

It was then that it all clicked. Sure, as Canadians we’re bummed that we don’t win multiple golds like the US, but the pressure that country puts on their athletes is unbelievable.

Our athletes, our Prime Minister, Canadians abroad, and The Tragically Hip represent our nation “Armed with will and determination, and grace, too.”

And now we will leave you with The Tragically Hip’s Grace Too:

Read Next:  The Best Road Trip Songs to Get you Through the long Ride 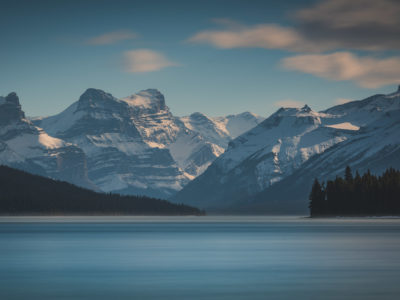 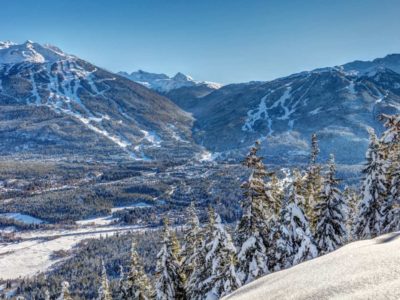 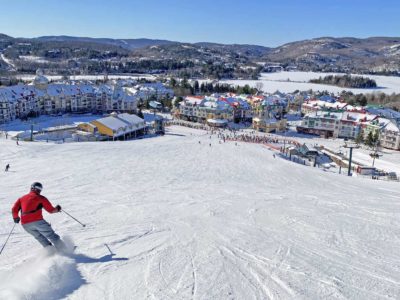