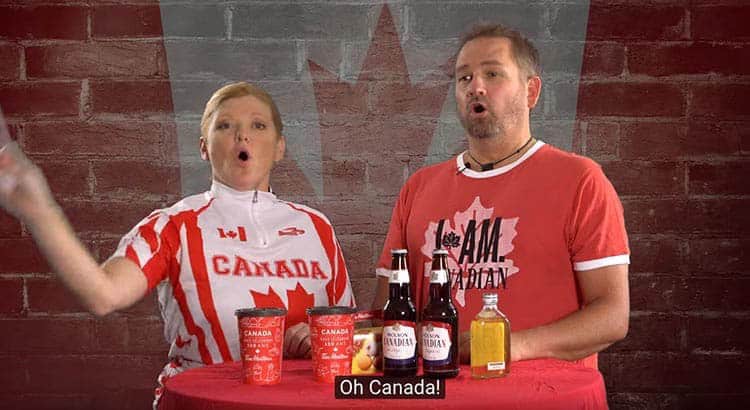 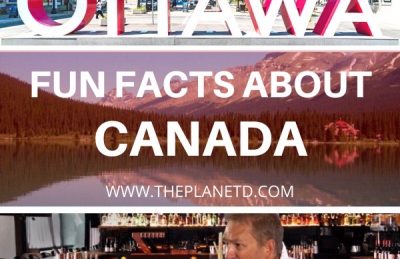 Want to know more about Canada? Being Canadian, we know a thing or two about our country, so we thought we’d share some interesting facts about Canada that you may not know.

So get out your notebook and get ready to have your mind blown as you learn these Canada facts right now!

1. Canada is the number 1 donut consumer in the world.

We only have 30-million people in Canada, but we eat 1-billion donuts annually. We can thank Tim Horton’s for this title. It is Canada’s most popular coffee and donut chain.

2. Canada is part of the British Commonwealth and is confused about that

Canadians are influenced by both Britain and the United States so we are a bit confused. We use both the metric system and the Imperial system. Let me explain.

We are on the metric system but most people understand a lot of the imperial system and we tend to mix both systems up a lot between measurement and weight.

Canada uses the British English system meaning we spell things like Color with a “u” Colour, and our theaters and Meters are spelled “re” – theatre, metre. But we have also adopted American spelling as well.

Here’s a very unique fact about Canada. Yes, we really do put milk in bags. We personally don’t drink a lot of milk ourselves, but I just recently went over to a friend’s house and she still has her bagged milk in a milk container.

This was the norm while growing up and 75% of Canadians still drink their milk out of a bag. I even see bagged milk at Costco!

Canadians really do Apologize a lot. We really do say I’m sorry or sorry often. If you visit Canada for an extended period of time, chances are you’ll be going home apologizing too.

Apology Act – In fact Canadians apologize so much, Canada passed the apology act meaning, you express sympathy or regret. It does not, in law, constitute an express or implied admission of fault or liability by the person in connection with that matter. But it doesn’t mean an expression of sympathy or regret.

5. Sour Toe Cocktail in the Yukon

In Dawson City Yukon, there is a cocktail where people drink whiskey with a human toe inside. It is called the Sour Toe Cocktail. People donate toes that have fallen off due to frostbite or other means. There is a $2500 fine if you swallow the toe,. When you drink a sour toe cocktail, you have to let the toe touch your lips and then you get t a certificate. When people accidentally swallow the toe good samaritans donate newly severed toe to drink.

In Newfoundland, there is a tradition of kissing a dead cod followed by a shot of rum known as Skreech. When you visit the province, enjoy Newfoundland hospitality at the bar and be sure to Kiss the Cod!

7. In Churchill Manitoba Nobody Locks Their Doors

In the far north town of Churchill, Manitoba nobody locks their doors to their house or cars in case of a polar bear attack. Churchill is located in the center of Polar Bear Alley and polar bears walk freely through the town. They have learned to live with them.

Canada has an ongoing dispute with Denmark. We have been fighting over an island in the Arctic since the 1930s. The two countries battle it out by leaving a bottle of Canadian rye whiskey or on the Danish side, leaving a bottle of Danish schnapps to stake their claim.

Most people in Canada live within 200km from the border of the United States. And most of the population lives in urban centres.

Canada has two official languages. The province of Quebec is the main French-speaking province, but New Brunswick also has a large Francophone population too.

The rest of Canada speaks English, but French is taught in schools and signs in the country are bilingual.

Canada’s Prime Minister is Justin Trudeau. Right now he is in the middle of his second term and is the head of a minority government. Canada works on a Parliamentary System that has been inherited from England.

We have five official parties represented in the federal government. Trudeau is part of the Liberal Party currently in power, with the Conservative Party as the official opposition. The New Democtratic Party (NDP), Bloc Québécois and Green Party make up the rest of the government.

14. Canada is the Second Largest Country in the World

Canada is a huge country. In fact Canada is the second largest country in the world. (Russia is the largest) with an area of 9.985 million km² (6.204 million miles²).

Canada is located in the northern hemisphere and is part of North America. It is north of the United States and East of Russia with Alaska bordering us to Northwest.

15. Canada has Provinces not States

Ottawa is the Capital City of Canada. It is located directly on the Ontario Quebec border on the Ottawa River. The Ottawa River is one of the premier places in the world for whitewater rafting.

Toronto is Canada’s Largest City with a population of 6.97 million people.

18. Canada has the highest tides in the world

The Bay of Fundy. houses the world’s highest tides. Located between Nova Scotia and New Brunswick, this body of water moves 100 billion tons of water through its tides twice daily.

19. Largest Freshwater Island in the World

Manitoulin Island in Ontario, is the largest fresh freshwater island in the world. It is an amazing place to visit. Located in Georgian Bay of Lake Huron, it is filled with hiking and cultural experiences. The Great Spirit Circle Trails allows people to immerse in Indigenous culture.

And another three of the largest islands in the world are located within Canada – Baffin Island, Victoria Island, and Ellesmere Island.

20. Canada has the only walled city in North America

21. Canada is the Polar Bear Capital of the World

Canada has more polar bears than anywhere in the world. We’ve seen about 10 in real life. In fact, Canada is considered the polar Bear Capital of the world. If you want to see a polar bear in real life, the best place to visit is Churchill.

Canadian Bank Notes have brail on them for the blind. (I thought everyone had braille on money, but only a few other countries do.)

23. Canada is the Most Educated Country in the World

Canada is the Most Educated Country in the World. I feel really proud of this Canada fact. More than 50% of the population has a post-secondary education. Plus, Canada has a 99% literacy rate. Not bad eh?

24. The national animal of Canada is the Beaver

The Beaver became the national symbol of Canada in 1975. It seems like a strange choice, but the beaver played a large role in building the nation. The country was built on the fur trade, and the beaver was in high demand for its pelt. So in exchange for nearly hunting them to extinction, we put them on our nickel as a thank you.

25. Maple Leaf is the Symbol of Canada

Canada’s National Sports are ice hockey and lacrosse – We love hockey so much that obviously it one of our national sports. But not many people know of Lacrosse. Lacrosse is our country’s oldest sport and has its roots in the indigenous community.

Canada doesn’t have much of a food identity. I would say what gives u our identity is that we have a very multicultural palette. One night we will eat Italian, then we’ll order in Thai or Korean and others we’ll be dining on Ethiopian or Indian. But there are a few things that set Canadian food apart.

Canada is cold, but we aren’t the coldest country in the world. Antarctica, Russia, and Greenland are colder. The lowest recorded temperature in Canada was in Snag, Yukon Territories at -63C. The coldest temperatures Dave and I have faced were -43C somewhere on the Hudson Bay in Northern Manitoba. But that’s okay, Canadians keep warm by wearing Tuques. (Or Toques as it is spelled in English) that is what we call a winter hat.

In 2012 the Great Canadian Maple Syrup Heist was national news when someone stole 3000 tons of maple syrup in Quebec valued at $18 million dollars. It sounds funny, but Maple Syrup is big business. Canada produces 80% of the world’s maple syrup.

30. A lot of Famous People are from Canada

There are a lot of famous Canadians that you probably didn’t know. A few of the more patriotic Canadian celebrities like Drake, Mike Meyers, and Ryan Reynolds are well known Canucks around the world. But there are so many famous Canadians.

And that is some of our favourite fun facts about Canada for today. Canada is quirky, Canada is fun and Canada is weird, it’s just the way we like it!

If you enjoyed all of these Canada facts, save this post to Pinterest for more future fun!

If you have any interesting facts about Canada, we’d love to hear it!

See more facts about other countries 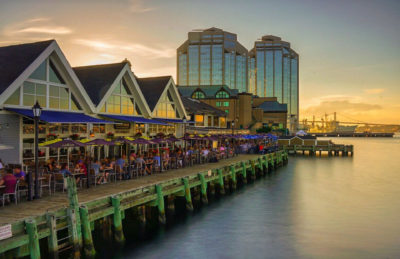 Things to do in Halifax, Nova Scotia 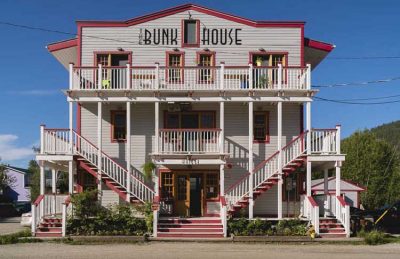 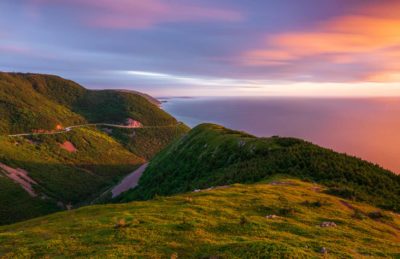 Best Things to do in Nova Scotia – The Ultimate Travel Guide 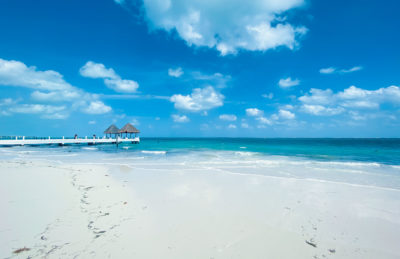 Best Things to do in Cancun, Mexico